Hi all, here’s a shot of the cool Bio-luminescence that’s been happening the last few weeks here in San Diego. The photo was taken with the live composite mode of my OMD Em1ii, which combined a series of 6-second exposures in camera. First, here is my attempt to bring out those cool blue waves using mostly Filmic RGB in DT: 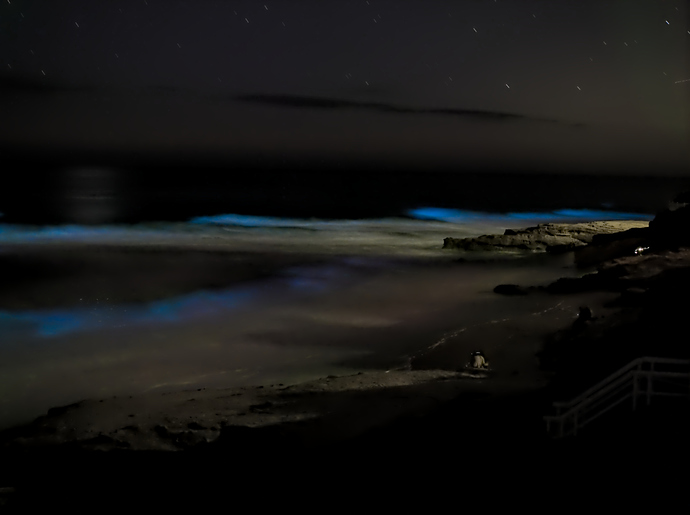 For me, my attempt went a little heavy on the denoise, but without it, I thought it looked too grainy. Would love to see other attempts at striking the balance between detail and noise when pulling up the shadows!

Ugh I am so jealous. I wanted to shoot this so bad, but the beach is a bit of a drive and I didn’t feel right going out there right now.

EDIT: I tried to edit, but I could not at all tame the noise 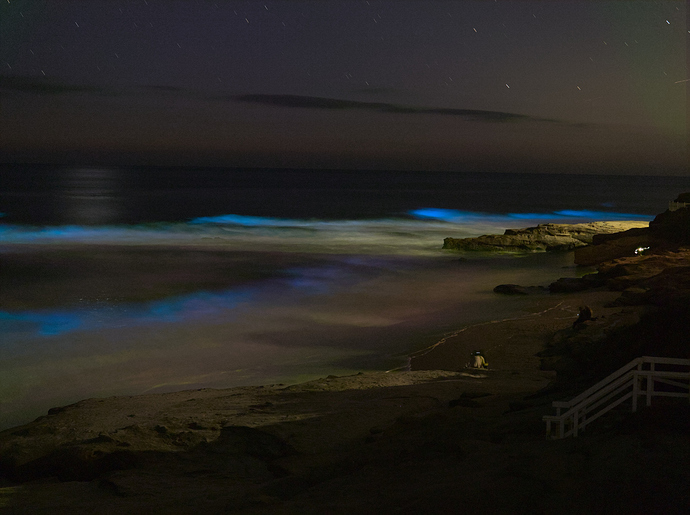 This is the first chance I had to get out to the coast. It was very very cool, and worth the drive. Go if you can before it ends!

Nice! Definitely more details left in yours, but that noise is a difficult beast to slay!

noise is a difficult beast to slay!

Nice shot! I like the sky, and the reflecting moon light. 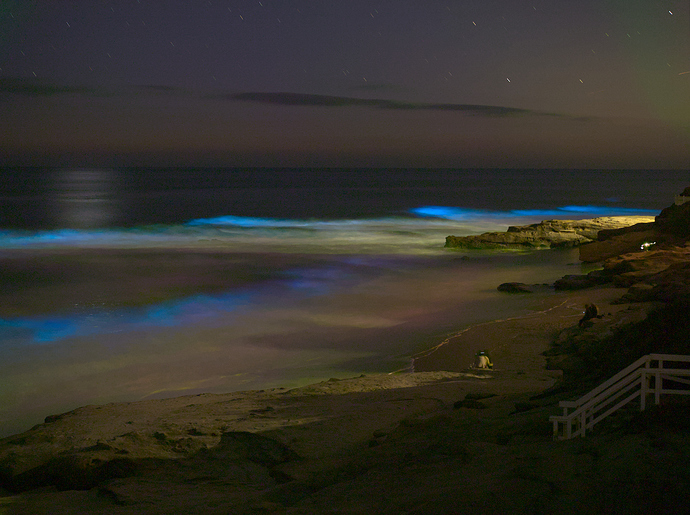 Never seen anything like this in real life myself, which might reflect in my editing choices. Anyway, here’s my take: 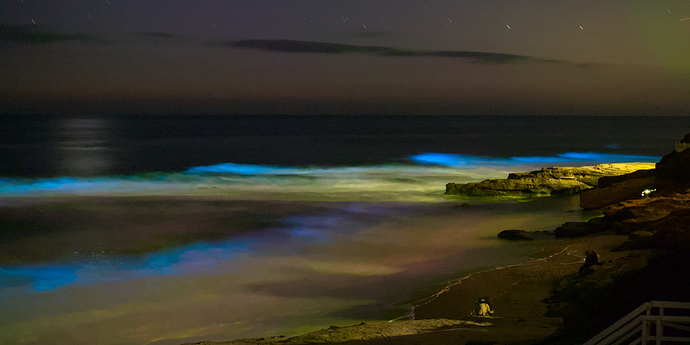 I’ve been experimenting and using more often the (denoise profiled) wavelets options, especially for chroma noise. It took me a while before I realized that the strength slider, if using auto, goes past 4 and most often needs to be larger than 4 (as a starting point).

Not sure if you are aware, but @rawfiner made some great noise reduction videos:

And a more general one:

As it is not stated that this is a Playraw just for darktable, I’ve tried it with RawTherapee.

I would have left a lot more noise in the image (just because I liked it), but the OP stated that it was a problem, so here it is: 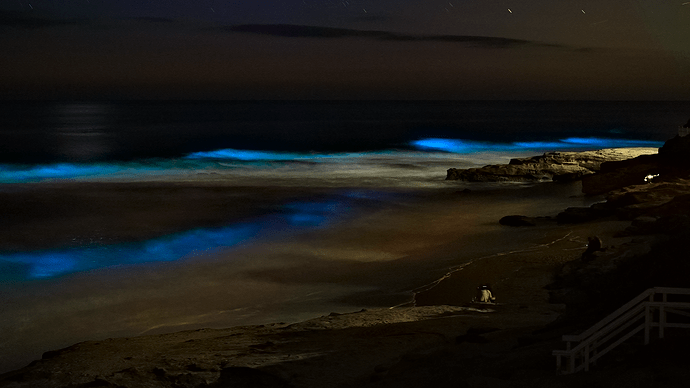 Note: the downsizing has helped a lot to tame the noise… 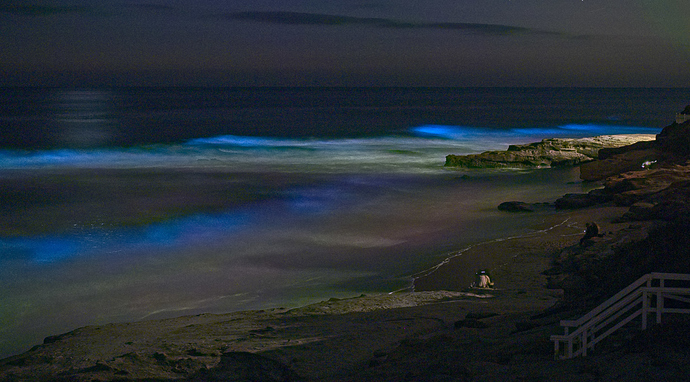 I used a guided filter in colour blend mode to tame the blotchy colour noise. 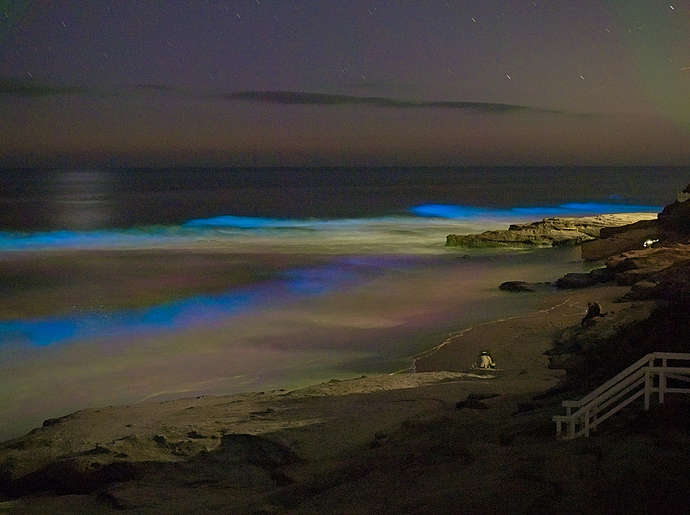 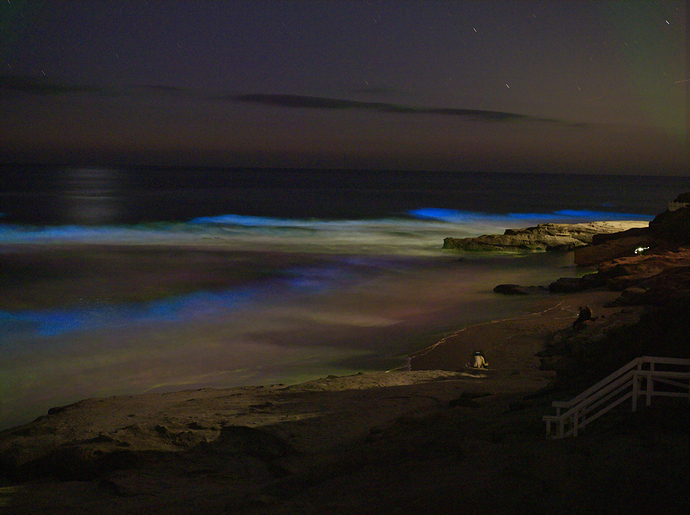 Fighting against blotchiness and posterization I reached this result (only 1.5 seconds of processing at full res), but some of the stars got erased still.

@Jade_NL Thanks for linking those tutorials! I had not seen those, nor have I played yet with the wavlet based denoise. So I will experiment with these techniques for sure!

@all Thanks for the very inspiring edits! As I look over the results, I can see the most of us have tried to emphasize that striking neon blue of the waves (naturally! It’s certainly the subject of the image!). The interesting thing, and one that I will be studying in more depth is how we all chose to try to balance those blues against the warmer, but darker, tones of the sky. The noise issue was the main one that I was hoping to gain some inspiration and new approaches to, and you all have certainly delivered there! For me personally, the revelation is that the noise does not need to be totally eliminated, just “tamed” to borrow the phrase from @afre. I take that to mean that the denoise step can be considered “successful” not just by removing or reducing noise, but by transforming the existing noise into a more pleasing rendition of noise. For me, the edits by @Jade_NL in DT and by @XavAL in RT have achieved the best balance with the denoise vs detail. I will certainly be studying the routines they’ve employed! Thanks everyone!

PS. I also think that there is more I could have done “in camera” to reduce the noise. Hopefully I will get another chance to drive out to the coast before this phenomenon is gone…

Not sure if you are aware, but @rawfiner made some great noise reduction videos:
https://www.youtube.com/watch?v=7ZhbeXpx2W8

What’s a good time to denoise? Near the beginning of the edit, right? You don’t want to bring in contrast or sharpening to noise, is that correct?

What’s a good time to denoise? Near the beginning of the edit, right?

I’ve had a rather heated discussion about this a while back. So this is my personal approach and I’m more then sure that others will not agree with it

First of all: I do not mind, non extreme, luma noise, I do mind chroma noise.

I apply denoise at the end of my processing.

Initially this was born out of necessity due to having an old somewhat slow machine without opencl. Denoise-ing very early in the process had me waiting multiple seconds with each slight slider adjustment later on. Not workable. I now have a more powerful machine and that need has gone, but…

I notice that certain modules introduce noise and this is more obvious when denoise is not applied yet. In some cases you can reduce the noise that is created by moving the module to a later point in the pipeline, in other cases it is a sign of over-adjusting. Both are reasons for me to denoise at the end.

The downside might be (is?) that denoise (profiled) is applied early in the pixelpipe and applying it late might introduce side effects to you earlier editing. So one might need to slightly adjust some settings in other modules afterwards. Then again, going back-and-forth is part of my workflow.

Just my oppinion… Try to take a number of similar pictures instead of one the next time. If you have 10 - 15 pictures you can merge them using the MEDIAN function (for example using blend layers (median) in G’MIC for GIMP). It helps a lot against noise. Of cource, you have to align the images first.

Will that work with a moving subject (water>waves)?

So, for example, if you have ten of 6-second exposure pictures like topicstarter, I guess, the result will look like as one picture with 60 s exposure, but with significantly less noise im comparison with single 60s exposured shot.

@Wladimir_K Actually, the “live composite” mode that I used does exactly what you are suggesting, but in camera. It takes a single base exposure for the scene, and then continually takes subsequent exposures of the same length and merges them in camera. There are several different methods for the merge (this is an Olympus OMD), but the “composite” style I used here only merges new pixels that are brighter than the pixel already in the stack. The problem I got with noise here is that I drastically underexposed the total scene in an effort to get more depth of field. In retrospect, I should have opened my aperture as wide as will go (f2.8 on this lens), and bumped the ISO a little to get my base exposure brighter and perhaps the shutter speed a little faster (2 or 3 seconds I think would have been better). Then the noise would be better since we wouldn’t have to pull the shadows so far up in post.