I’ve recently acquired an EOS M camera, converted (590nm) for infrared photography and I’m having some issues working out how to adapt my workflow to get consistent results.

Basically, I’d like to capture photographs exposed with a reasonable white-balance for producing false-colour images, exposed as far to the right (ETTR) as possible, using the in-camera histogram. I’ve done a bit of googling and the advice is varied.

In my first session with the IR camera, I therefore took little care to get a good White Balance setting (assuming I could fix it later). Every shot had a seemingly-well-exposed histogram with no blinkies and I thought I had a job well done.

When I got home, though, I was in for a bit of a surprise - on importing the images into darktable, pretty much all of my images were showing as overexposed (using the raw overexposed indicator).

The conclusion I came to is that white balance is important even when shooting raw - namely for getting an accurate in-camera histogram. As I understand it, the in-camera histogram is based on jpeg output, which ‘bakes in’ the White Balance. In my non-IR workflow I’m used to using the in-camera histogram and assuming that if I do a histogram pushed to the right (and ‘blinkies’ showing overexposure), I still have a little potential leeway, because the raw file will often still be well exposed.

The opposite appears to be true for infrared.

Next shoot I took care to set my White Balance from a patch of grass and, though I got a more accurate exposure, I was still getting overexposed shots, despite the histogram telling me all was well.

So, to the nub of my question - does anyone have a consistent method to get a good white balance from which I can get (a) more accurate histograms; and (b) good false-colour images? Ideally, given that I mostly shoot in an urban setting (in winter at the moment), one that doesn’t involve me hunting about for greenery!

I expect it’s possible that (a) and (b) have different answers and I might end up taking two WB shots - one for exposure and one for post-processing.

I’ve never shot IR and don’t know the answer, but have you tried setting your camera WB to the furthest red it will go? For example, a Nikon D800 can be set anywhere between 2500K and 10000K. I suppose 2500K is the best setting for IR.

The benefit of using Magic Lantern is that it can provide accurate raw readouts, among other neat features. (Note that each camera model and firmware has a different level of support.)

I have played with ML a bit but ended up removing it in the end. Unfortunately the raw readout is about the only thing it gives me (that I would use), and getting a live-view raw histogram comes at the expense of other things that I find useful in the Canon menu system. The camera I have is pre-owned and the click wheel isn’t in the best of condition (I keep accidentally getting button presses instead) so I rely on the Canon touch interface to tweak settings and this can’t co-exist with the ML overlays.

ML is fully customizable: disable the features that you don’t need. In your case, the point of having a raw histogram is to measure the extent of the metering headroom or the lack thereof in various framing situations. Once you have that info, you can turn it off and learn to compensate for the difference intuitively.

Second, it has handy ETTR and WB tools. Anyway, whether you have ML or not, experimentation is necessary because every (converted) camera is different.

I take your point and probably will give ML another shot. Unfortunately with the combination of different lighting situations, white balance, framing etc. I’m not sure it will ever become intuitive for me.

I forgot to mention that in live mode what you want is the spot meter that shows you the percentage of exposure. You can adjust the size and location. I also find the histogram that shows overexposure circles useful. ML has a lot going for it. I only use 1% of it and am fine with that.

Problem with the EOS M is the lack of buttons. I had ML on my old 100D and it was great because I had hardware buttons to handle all the normal ‘camera stuff’ like setting ISO, aperture, exposure comp. On the M it’s all many clicks away, and more so if I have to exit out of the ML live-view to a canon interface first. I just found the workflow a bit painful with ML.

Anyway, I’m sure I’ll give it another go next time I’m out.

Not saying your qualms are invalid.

Looking at the manual, it looks like the EOS M has the buttons you would needed to operate ML. 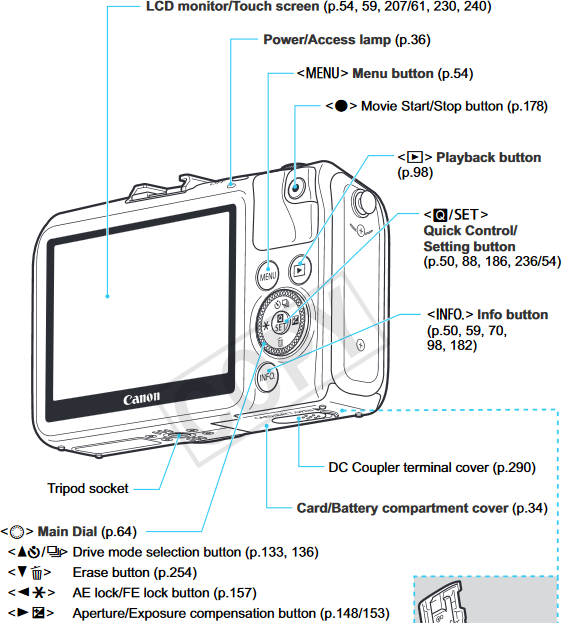 It has the buttons to operate ML but the aperture/exposure compensation button is used to switch between the two and relies on the click wheel to change the setting. It’s also not clear on the ML overlays which one you’re changing and when your use of the wheel automatically swaps to the other one mid-alteration… it’s mildly maddening.

Indeed, it is a separate button on my camera. Maybe there is a way around it such as button customization in-camera or in ML. Try searching or bringing it up in