After three months of active maintenance and another bug triage, the digiKam team is proud to present version 7.8.0 of its open source digital photo manager. See below the list of most important features coming with this release.

As with the previous releas, we take care about upgrading the Qt framework with a LTS version. Since Qt 5.15.2, the framework is only published privately to the registered clients from the Qt Company. By chance, the KDE project deals with the Qt company to provide a rolling relea se of the whole Qt framework including all the most important patches. This is the Qt collection patch used from now by the digiKam AppImage bundle. This allows digiKam to benefit from important fixes as to support the most recent version of Mysql and Mar iadb database in the QtSql plugin. Even if Qt 5.15.5 is just released as open-source, more than one year later 5.15.2, we will continue to use the Qt Collecti on Patch, as the last customer Qt5 release is 5.15.10. So there exists again a serious gap between the open-source and the customer versions of Qt.

Update of KDE framework and Libraw

This new version arrives with 51 files triaged and closed in bugzilla.

With this release, HIF images are now recognized as the modern HEIF, and the famous GMicQt tool have been updated to last 3.1 release.

Other improvements are crash fixes in specific conditions, fixes for regression use cases, add grayscale and 16 bits PSD images support. The application internationalization has also been updated.

We plan to release the next 8.0.0 in a few weeks, if all regression tests are passed. Depending on the results with 8.0.0 source code, perhaps we will maintain a little bit of the 7.x series with a new 7.9.0 version if necessary, including the last most important bug-fixes discovered.

8.0.0 is ported to the new Qt6 framework and it is still compatible with Qt5. All new important features are hosted to this code. This summer we have mentored two students working on the Image Quality analyzer using neural network, and a new plugin to perform OCR over images using Tesseract. The projects are under finalization and will be integrated soon to 8.0.0.

Thanks to all users for your support and donations, and to all contributors, students, testers who allowed us to improve this release.

Rendez-vous in a few months for the new major digiKam 8.0.0 release.

When can we see faces grouped by faces in face recognition? I mean after a scan all unknowns should be grouped by faces and not like now that every face is presented in one big unsorted pile.
https://bugs.kde.org/show_bug.cgi?id=444160

Hi, The clustering face feature still under development in a separated branch. Code have been initiated while summer 2021 but student has not finalized the implementations. We will work on it while this autumn.

Agree. Picasa had this like back in 2015. If I want to manage photo collection mainly by faces, I don’t think I would bother using digiKam. I am surprised Face recognition feature isn’t being actively developed on.

Also the fuzzy search I’ve seen has stayed the same for years and no improvements there.
I have a huge collection of photos - 300,000 and I would greatly benefit from fuzzy search, but it doesn’t work properly most of the time.

Also similar image search searches images only by colors it seems and not by object placement/location and similarity of objects in image… I want to find sometimes images that are similar but not exactly the same (like on yandex.com image search), but I can’t do it with digikam.

And have the developers of digikam looked into AI image tagging? There are open source software out there on github that can tag images with keywords of the objects contained in the photo, like “one person”, “two persons”, “animal”, “landscape”, “water”, “sky”, “group of people”, etc.
This would be an extremely useful feature if added that could outcompete many other photo management softwares.

And have the developers of digikam looked into AI image tagging?

I think (not “know”!) the developers have looked into a lot of things. But they have only so much time to spend on digikam, besides other (arguably less important) activities like gaining enough to eat… So development may not go at the speed you’d prefer…

For your question about (semi-)automatic tagging, perhaps photoprism is of interest?

If you want object recognition now, check out 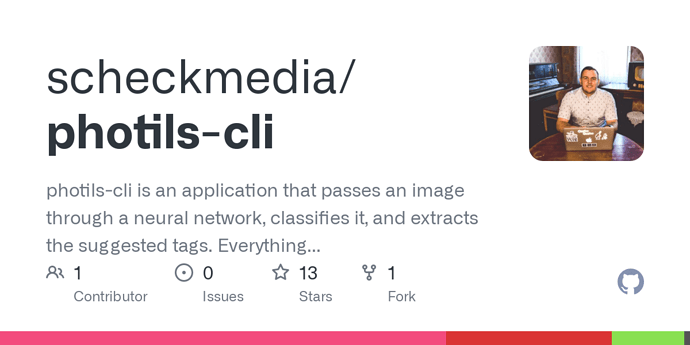 photils-cli is an application that passes an image through a neural network, classifies it, and extracts the suggested tags. Everything happens offline without the need that your data are sent over...

Thanks to everyone who keeps this project going. I use dK in my every day work.

For your question about (semi-)automatic tagging, perhaps photoprism is of interest?

Yeah, I tried it a few weeks ago, but I didn’t like that it’s web based and UI is also not very good (too large, too animated and slow, not compact) and meant for touch screens mostly. Image tagging was ok and it correctly classified images that I had trained before, but it’s overly time consuming and not automatic enough.

Also images are not linked to real locations on your file system, but they are stored in some other location upon import and you could download them and the file has modified filename and possibly different MD5 as well. Files also can’t be deleted from this software, only put in trash.

Later I found that Excire Foto had similar and even better tagging system that detects objects found in photos automatically and lets you later search it or checkmark various tags to get desired photos from a library. But it’s a paid software.

If you want object recognition now, check out

I tried it. Many of tags are very wrong but still, it could be very helpful to organize a large photo library.
I wish digikam had this type of tagging system implemented or added as a plugin and tags related to photo are stored in some centralized database.

Thank you very much for your continued work on digiKam! I really appreciate the work you put into making such great software available as Free Software!