Effects on pixel when changes are made, such as exposure

Suppose you have a patch of color with all the pixels at rgb of 128,0,0. What happens to those numbers when you:

The answer to the first is, I believe, the 128 is increased. Yes, no? The others?

Er… are you asking generally, or regarding a certain piece of software?
If the latter, it must be dead easy to check?
Or have I misunderstood something?

I’m on my phone, can’t write a complete answer, but exposure is a multiplication, so the zeros won’t move…

In general, I’d surmise that all of the operators in your list have an arithmetic multiplication as their foundation, so that dynamic is in play. However, under the hood things are never that simple. In gimp, make an artificial image of red, lighten it up, see what comes out…

It depends on the definition of each term.

For example, using ImageMagick’s HSL colorspace, (128,0,0) is at maximum saturation, 100%. But saturation can be increased by increasing red while decreasing green and blue. Yes, this gives negative G and B values.

the operations you’ve mention are just math. what actual representations are decoded/operated on/encoded… that’s a different matter and it depends.

I know it’s easy to skip to software but I really find trying to understand things from ground up helps in general.

My recommendation: start from https://hg2dc.com/ (question 1) and work your way up. And for processing - Aurelien’s videos apply usually to all processing

Good points, all. I’m using GIMP and putting together a table of results. Will post soon.

Actually, values are less important than what you mean by the terms. Each term can have any number of interpretations. You mentioned that you are using GIMP. You would have to tell us what your document settings are and which tools you are using. That way someone could look into the code and tell you exactly what is going on.

PS I will add the GIMP tag to your OP for clarification.

I was really just interested in how a pixel’s values change when these tools are applied, not really the theory. Just what does it do to a pixel to add saturation, and so on.

Could you please order it by tool?

The ordering is by similarity of effect, e.g., both exposure and color temperature only change R regardless of whether you increase or decrease the effect from the starting point. Edit: that’s only true when g and b are 0. How each tool calculates the changes is a complicated affair involving equations that give me nightmares.

Contrast is interesting to me because it doesn’t change the original R value, just G and B.

Contrast is interesting to me because it doesn’t change the original R value, just G and B.

Your choice of input actually set that up. ‘Contrast’ is about the rate at which tone changes, which can be considered with a graph of a line with a certain slope. Steeper the slope, higher the contrast, and vice versa. A simple contrast tool’s graph will ‘pivot’ about the center as contrast is changed, so a value of 128 on a 0-255 scale will sit on that pivot, and not change as the slope is changed.

You can demonstrate such with a tone curve. To increase contrast with a curve, take the lower-left control point and drag it right, and then drag the upper-right point left by an equal amount. Should look like this: 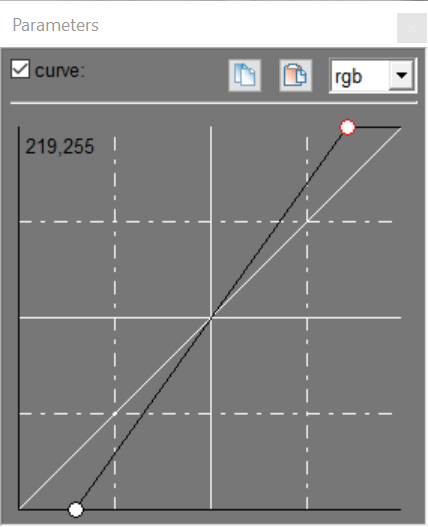 Note the midpoint of the line still intersects the center of the graph. X=128, Y=128. Now, a decrease in contrast looks like this: 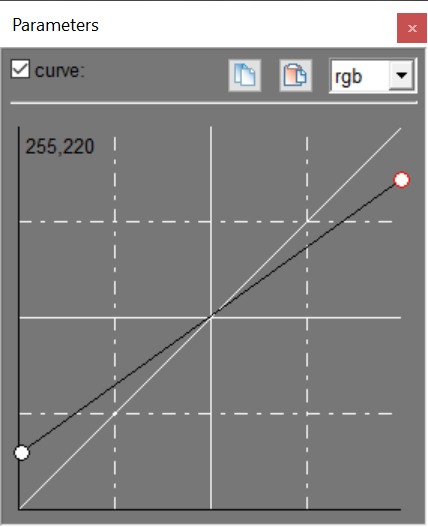 Thanks for pointing that out. I’ll pick some new points and test them.

But a “contrast”-increasing control might do something different, and simply lighten all values above some middle, and darken all values below that middle.