You will need Canon with Magic Lantern if you want in camera raw histogram. Very useful when ETTR without clipping the highlights.

… determine the number of stops between middle grey and highlight clipping on your camera.

I suggest testing. Always test. Definitions and theory are wonderful, but should always be tested.

If I photograph a totally plain out-of-focus grayish card with my D800 at the metered reading, how many stops below clipping is the raw file? Five stops.

If the illumination isn’t even, and the card has some texture, I get only about 4 stops between the maximum recorded number and clipping. See Linear camera raw.

Does this mean that Nikon didn’t follow standards, or my camera is wonky? I don’t know and I don’t care.

I don’t know the answer to that, because I don’t pay much attention to histograms, and certainly don’t remember what histogram the camera showed. When I take the photo, the histogram suggests that I have clipping, or I can open up a stop or two without clipping, or whatever.

When editing, the histogram shows peaks, so it suggests what curve I might use to spread values out to increase contrast (and thus legibility) in areas at those peaks.

By “ETTR”, I mean “the maximum exposure that doesn’t result in significant clipping”. Yes, the phrase “expose to the right” implies pushing the peak of the histogram to the right, but that’s not really my goal. My goal when taking the photo is to get the best data I can.

Suppose my subject is a very small white cat in a very large dark cellar, and I want detail in the cat. I expect the in-camera histogram to be bunched to the left. I expect my camera’s meter will pay too much attention to the dark cellar walls (which I don’t really care about), and will likely clip the cat. To compensate, I might meter just the cat, and open up 2 or even 3 stops.

As far as I know, my D800 can’t be persuaded to give a RAW histogram.

That has nothing to do with the reality of how cameras meter or record a view. Just check your own camera and a few of your friends.

I also found this information useful in getting to know my camera https://www.fastrawviewer.com/blog/how-to-use-the-full-dynamic-range-of-your-camera

I tried this with my 7DmkII. I shot a SpyderChecker24. I started clipping between 1-1/3 and 1-2/3 stops of added exposure, according to RawDigger. I pulled the 1-2/3 stop image into darktable and adjusted the over exposure indicator until it showed the same clipping areas as RawDigger did (the white and light yellow patches). The adjustment ended up at 1.8 in the over exposure indicator. In the image the colors were way off so I set highlight reconstruction to reconstruct in Lch and guessed the setting might be 1.8. I set that and my colors are almost exactly what they should be (the white patch has a blue tint but I was shooting under really bad lighting since all I was worried about was exposure). I haven’t looked at the code to see what the clipping indicator actually measures so I’m not sure how it calculates whether a channel is saturated or not. Or maybe this is a setting that can be configured based on camera and some extra dynamic range unlocked.

There are now several ways. Any one channel or all channels and I think one other mode

I try for ETTR if possible.

If the scene has gentle clipping without large chroma changes, I sometimes choose to clip one channel to maximize my usable dynamic range.

Sometimes it’s just impossible to reasonably ETTR, or the clipped highlights are so small that it doesn’t matter if they’re clipped or not, and then I just… wing it based on experience. 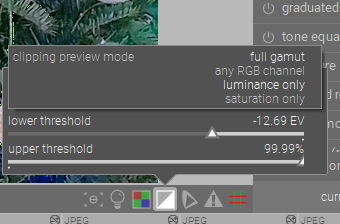 That’s not calculating clipping of the raw sensor values though.

I said clipping when I originally wrote it, but I meant raw overexposure.

Yes, and none of them will match RawDigger for all colors, because the working space color channels are a combination of all the raw color channels.

The issue with “shooting under really bad lighting” is a symptom of this.

I’ll make another post tomorrow with pictures that will hopefully explain it better.

Does ETTR Metering in camera make sense in metering modes other than spot metering?
Matrix metering, the way I understand it, weighs the measurement based on a manufacturer’s internal database. As an extreme example, the camera guesses whether the scene is a sunset or an evenly lit scene and biases the output for that.
Center metering, I am not so sure. But the idea of ETTR is to find the brightest relevant point in the szene and measure (and manually compensate) for that. Center metering might already be too large and take to much darker area into the reading.

Just from a practical point of view, for plenty of what I take pictures of, spot metering is not an option. Too much movement, too many changes in lighting.
Looking at it from that direction, I have my camera setup for a neutral picture style (not even reducing contrast and saturation) and try to get a proper exposure that way. This way I theoretically might get a little worse signal to noise in comparison to a successful ETTR but I keep good margins to the extreme points.
The larger exposure lift I need to perform in a filmic workflow would have been compensated by the base curve (brightening up the picture) in the “old” workflow?

The larger exposure lift I need to perform in a filmic workflow would have been compensated by the base curve (brightening up the picture) in the “old” workflow?

That can be at least part of the reason (just look at various basecurve presets), but the exact influence depends on which basecurve is applied, and thus (probably) on which camera brand you use. I know that for Sony, I could add at least 1 EV exposure relative to the basecurve. That was also the reason I usually switched to another basecurve to get a rendition more to my liking.

ETTR should evaluate the entire frame equally, so it would be its own metering mode rather than center-weighted, spot, or whatever “evaluative/matrix/etc” that aims for middle gray.

I’ve been working hard the Z 6’s Highlight-Weighted Matrix mode, which is separate and distinct from their Matrix mode. It can definitely blow highlights in some cases, mostly from my observation when the scene includes light sources, but it does a good job of not blowing anything else. It does so at the expense of a stop or so of headroom, mostly, but the camera’s sensor in the depths of the shadow pit does quite well in allowing some curve to yank them into presentability.

My ‘ETTR’ technique of late is to bracket, if the scene will stay still for it. Otherwise, on-the-go I’m relying on this mode and post-process lifting, and I’m satisfied with the results. I don’t think I’d buy another camera that doesn’t have such a metering mode. Not that I wouldn’t enthusiastically embrace a proper ETTR mode…

The measuring method doesn’t matter: you just need to avoid clipping. It doesn’t help to measure just the brightest spot since the camera evaluates this as mid grey - then you need to know, how much you can increase exposure until there’s clipping in the raw.
Unless there’s a raw histogram or zebra indicating clipping based on sensor output its up to your experience…

ETTR should evaluate the entire frame equally, so it would be its own metering mode rather than center-weighted, spot, or whatever “evaluative/matrix/etc” that aims for middle gray.

To complicate things a little more, in my case I use ‘back-button focus’ exclusively, I just got hooked to it many years ago. Meaning “focus in the center, recompose, meter/adjust and shoot”. That’s one reason I’ve been using matrix metering forever - metering before composing did not sound reasonable, but I guess I’ll have to try it and see what happens.

I’ll also try @paperdigits recco, perhaps setting +2EV overexposure permanently during a few sessions. Taking a look at recent and old raw histograms going back a few years, they all seem to have 2-3 or more EVs of headroom.
I will also use bracketing harder while testing this, that’s a great idea. I have been using 3-frame / 0.5 or 0.7EV bracketing more for “fine tuning” exposure. I’ll try 5 or 7 if the scene allows. It’s free anyways

I wonder why Nikon & Canon do not add ETTR exposure mode. It seems like there is a demand for this

I wonder why Nikon & Canon do not add ETTR exposure mode. It seems like there is a demand for this

Probably because it’s a lot less useful for jpeg shooting, and it sounds like it’s rather hard to get correct (especially in the higher ISO settings).
And how many users really care about such a mode (as a proportion of the total userbase for those cameras)?

I will also use bracketing harder while testing this, that’s a great idea.

I’d highly recommend using the HDRMerge darktable plugin when bracketing - it will align and merge your bracketed RAW files into a DNG that is auto-imported into darktable. This way you can just process the resulting DNG as you normally would. As long as you have a scene that lends itself to bracketing, this is really powerful