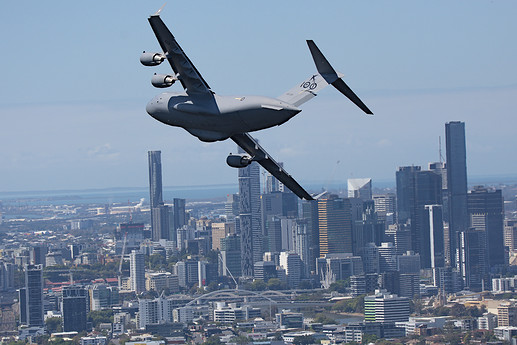 My problem is that we already had a fair amount of heat haze (Summer is almost upon us, it seems).
The haze removal tool has always seemed a very blunt instrument to me, however it does render the city skyline much better. The side effect on the shaded parts of the plane is annoying to me, however.

I managed to use a parametric mask on a secondary exposure module to overcome the worst of the haze removal side effects in darktable 2.7 (master).

How would you process this image, assuming you want to enjoy good detail in both the subject (Globemaster) and the Setting (cityscape)?

You caught my interest a couple of ways: 1) C-17, 2) loves Brisbane! Two visits, one in the early '90s on a vacation organized by my father-in-law; later, I spent two weeks working at Boeing House, which is buried in downtown in your photograph, down by the river. My favorite city in Australia.

Anyway, here’s my rendition, in rawproc: 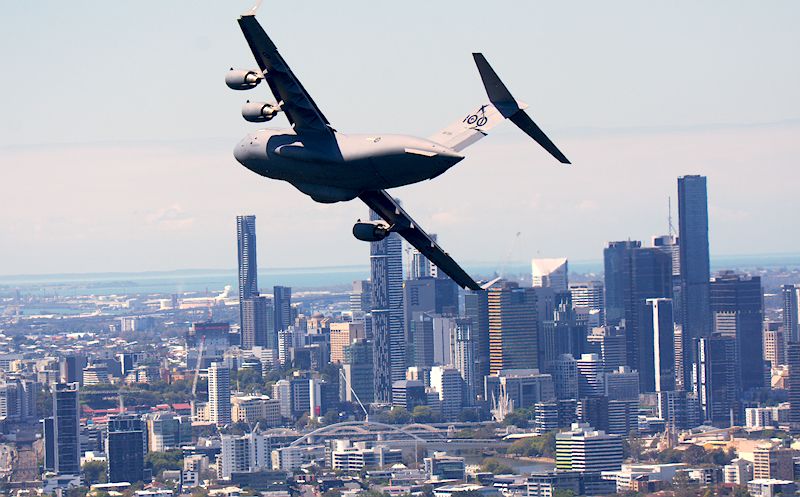 Yep, you just can’t rotate to square up the horizon without chopping off the wingtip. I did a two-curve tonemap, a log curve followed by a custom-shaped control point. I did add just a bit of color saturation, mainly to put some contrast in the scene.

Thanks for your rendition, Glenn. If you are familiar with Brisbane, then you may be interested to know that I took this at the summit lookout on Mount Coot-tha. Moreover, that zoomed all the way out, I couldn’t get that banking C-17 in a horizontal frame without losing the river-level of the city. In other words, it was very close.

My version, with different perspective and color grading. 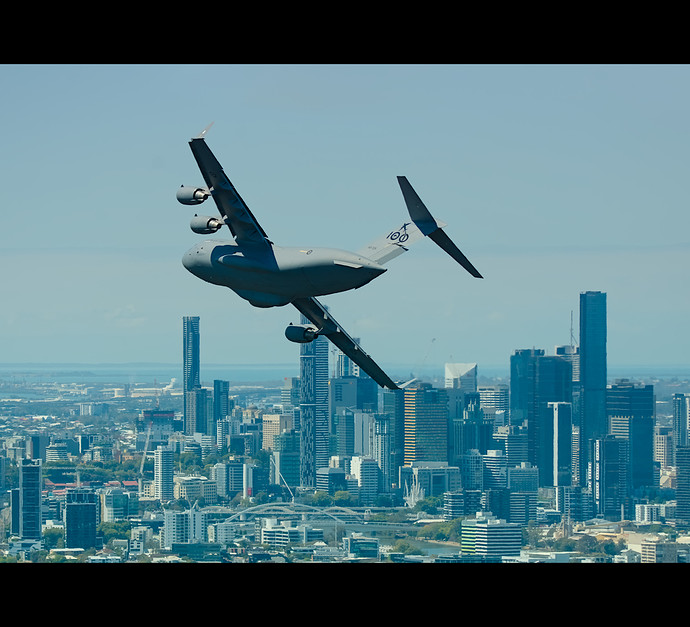 Thanks for sharing this nice image.

A fun image to play with. My attempt in GIMP. Unfortunately I was unable to get any detail in the dark parts of the aircraft. 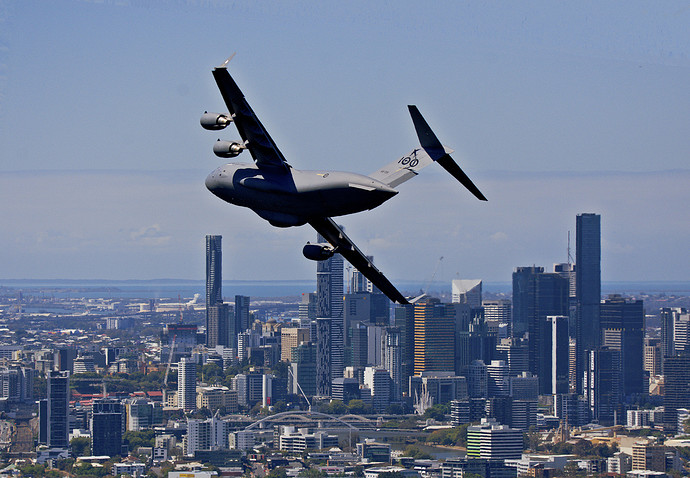 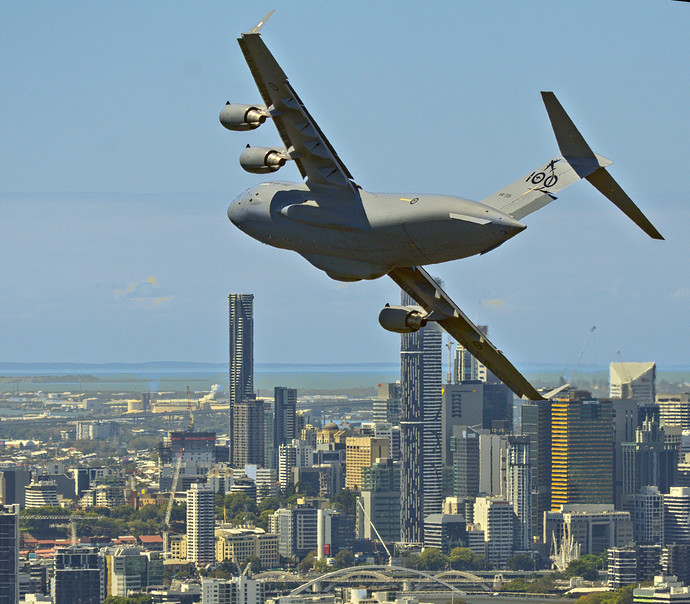 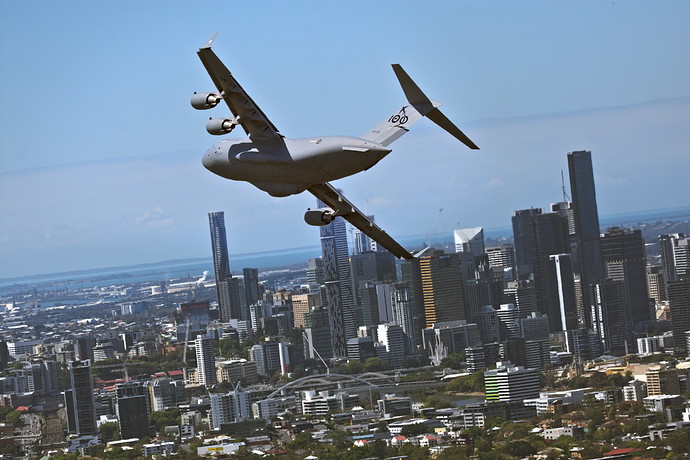 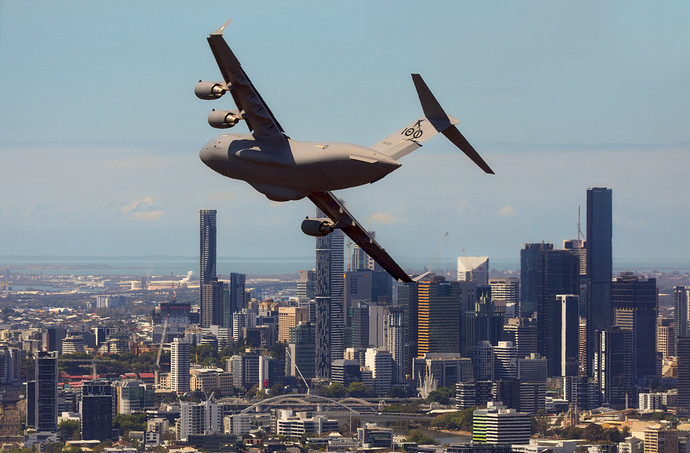 Had to be a bit creative here: RawTherapee has a very basic spot removal tool that works on the original image (before rotate/crop), filling in the extra black space that is created by rotating isn’t possible in one and the same edit session due to this. So I did the full edit, exported and reloaded it as tiff and did this one retouch step on the tiff. The accompanying sidecar is from the full edit and thus has a black triangle in the top right corner.

I could have pulled it into Krita/GIMP, but that isn’t any fun

About this image: It is indeed hard to get some of the detail back in the underside of this plane and the haze is also a nice hurdle. All in all an interesting image to edit. Thanks!

Using retouching to recreate missing sky. Have never thought about this. Thanks @Jade_NL.

I reworked my edit with this tip and also made some masking on the plane. 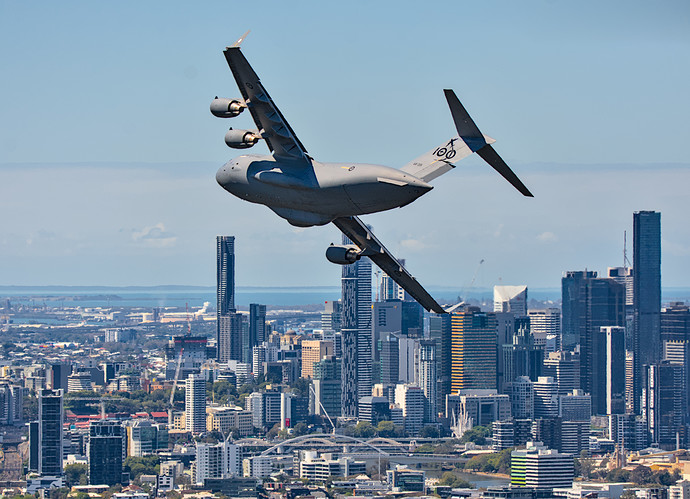 With hindsight I’m not sure if warming up mine a tad was such a good idea. Should have limited that to the city and nothing else.

Sorry for spam, but here I go again.

I recognized, that for whatever reason the retouched sky is darker.

This only showed up in DT at 100 % view, so I have just seen it after uploading the JPG. There was also some dust I removed. 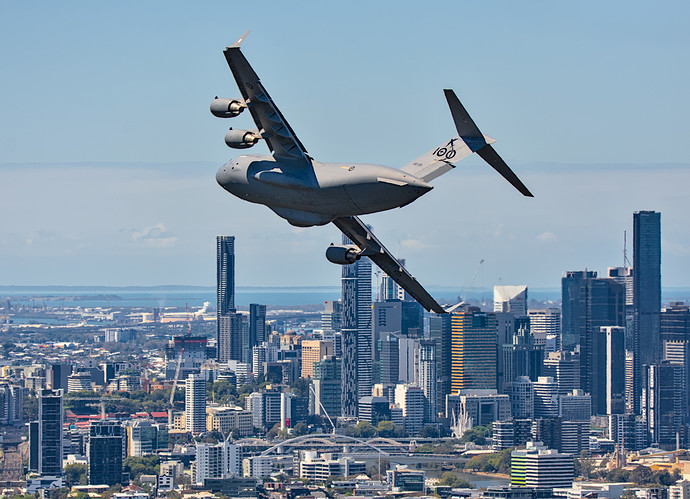 @Jade_NL
I also prefer warm color for sunny photos. I like your edit, it has some sort of film-look to me. I also did some warming in color balance rgb, but kept it subtle. 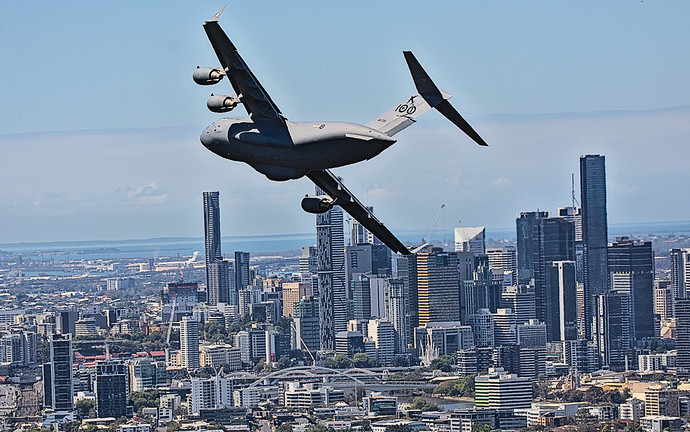 Nice! Next time some submarines? There is some discussion in Europe about the new deal.

I have some issues with the image. Looks like a fake… Don’t know why. Still searching…

I can assure you it is not fake, @heckflosse. A I mentioned in my reply to @ggbutcher here, the aircraft was very close to my vantage point.

There is also a news article from the National Broadcaster showing footage of the helicopter practice run, and mentioning the Globemaster here

Wow, thanks everyone for your enthusiasm and inventiveness. @Jade_NL - expanding the size of frame by filling in the sky is a masterstroke - thanks for the inspiration. Although it seems that both @difrkaguilar and @david did the same by corresponding methods, in retrospect.
@david, I really like your rendition of the city. Of course, I’d like to see shadow detail under the C-17 as well - you see my difficulty with the capture. As I alluded to, I added EV to the affected area with a parametric mask, i.e. burning. It feels like a bit of a cheat, however.

@Thomas_Do, subs Down Under in Australia are indeed down under, in more ways than one!

For starters, instead of some 261m above MSL (the altitude at which this pic was taken), they tend to be below MSL!!! Moreover, the sub squadron is headquartered in Freemantle, Western Australia, and the construction is headquartered in Port Adelaide, South Australia. Both are down under (further South) from my perspective here in Brisbane, Queensland. (See map below for the geographically challenged). 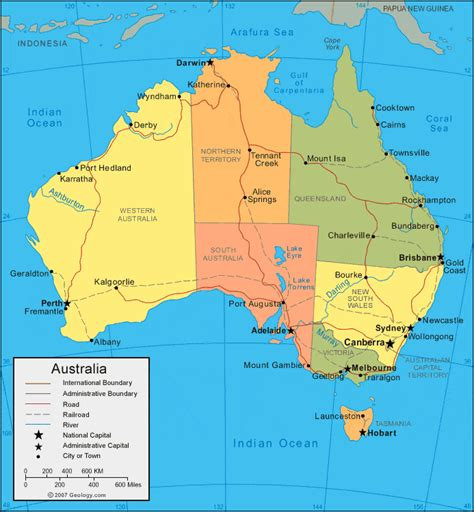 Seriously, there are so many puns to be made with submarines: the news media here endlessly recycled the notional that Australia" sunk the previous sub deal with the French company Naval", and you have to wonder , what is going down? I am reminded of Billy Crystal at the Oscars the year Titanic won so many: “I’ve had that sinking feeling all evening.” There’s also the line from The Hunt for Red October: “You hide a submarine by sinking it; they’re designed to do that, you know?!”

I think you did very well to get the photograph with a fast moving aircraft so close. The loss of detail on the underside is a small sacrifice.
My try was done very quickly and helped by GIMP plug-ins: Uncrop-side (to create “extra” sky, Heal transparency (to synthesize the empty corners after rotation), and Colour Cast Reduction (reducing the blue cast on the city-scape). 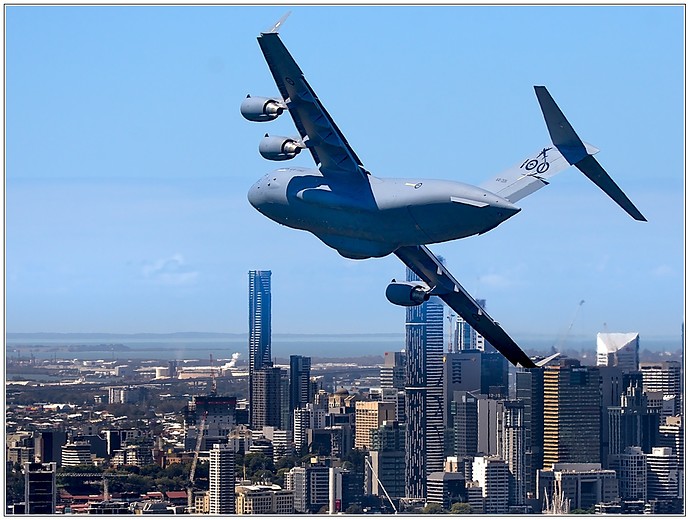 By way of an experiment. To see what results by taking adjustments to an extreme level. 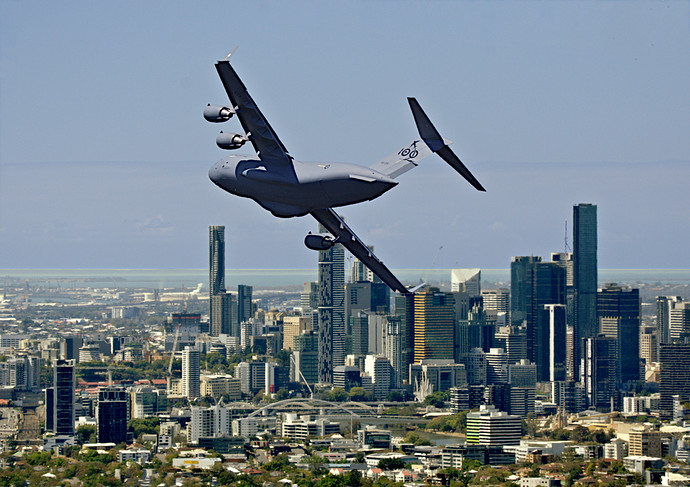 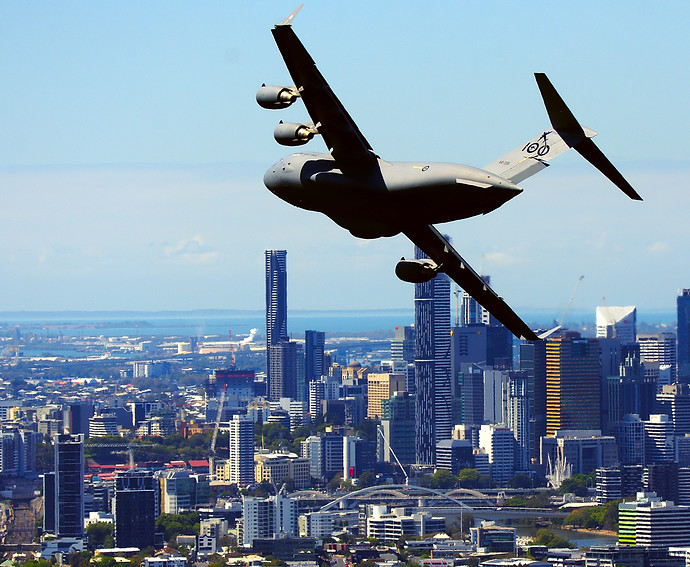