How do I duplicate a global wavelet adjustment in local adjustments?

It is not possible to use levels above level 7 if one is also using wavelet denoise. This is because it would require too much processing power and memory. The restriction is coded into RawTharapee. I sometimes want to use wavelet denoise and make adjustments to wavelet level 8. Someone suggested that I could use the local adjustments tool and select the whole picture to make the wavelet level 8 adjustment and use the wavelet tab to make the denoise adjustment. I am struggling to do so. Here is a photo with no adjustments other than basic exposure. 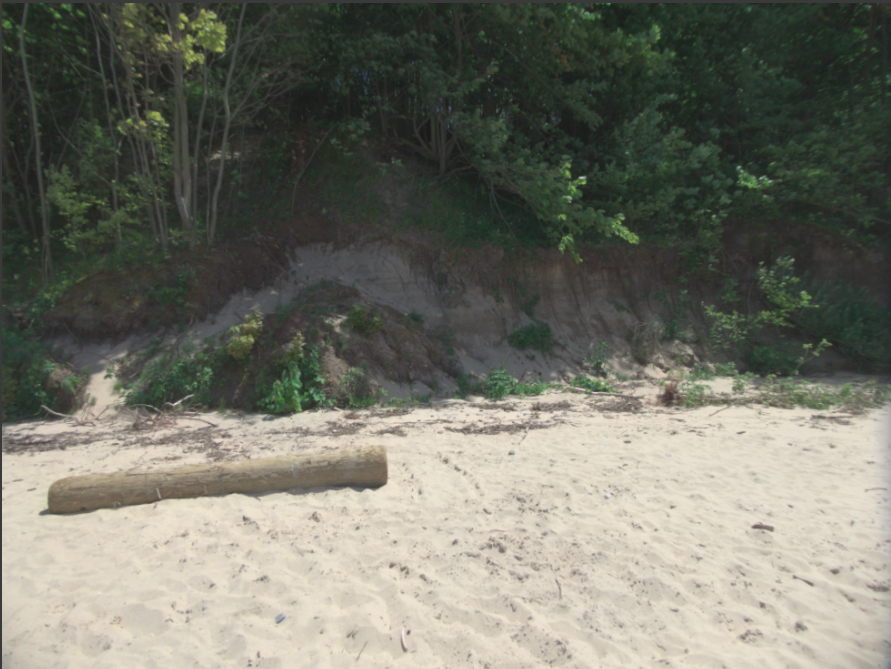 Here is the level 8 detail I want to emphasise. 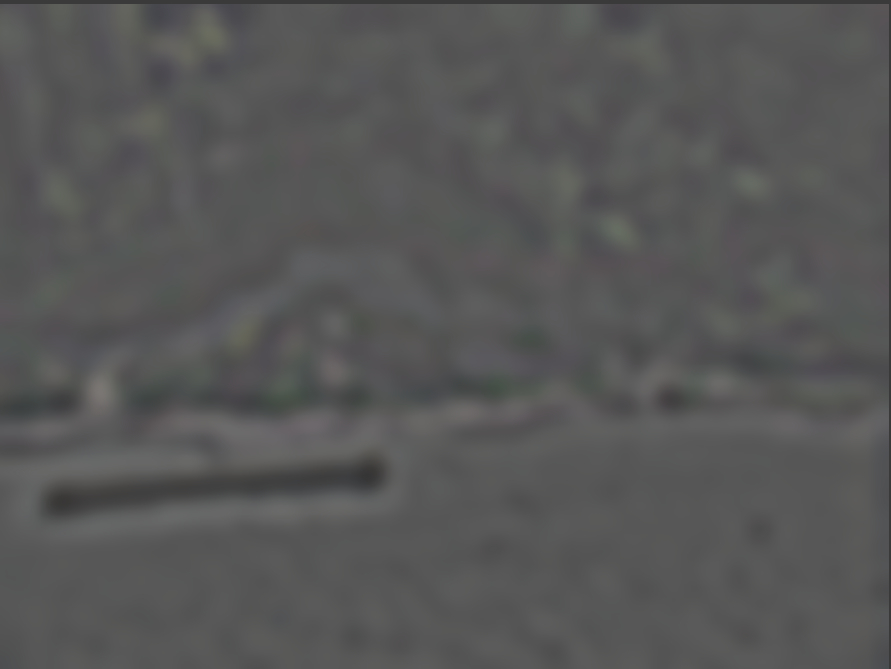 Here is the photo after the level 8 adjustment. 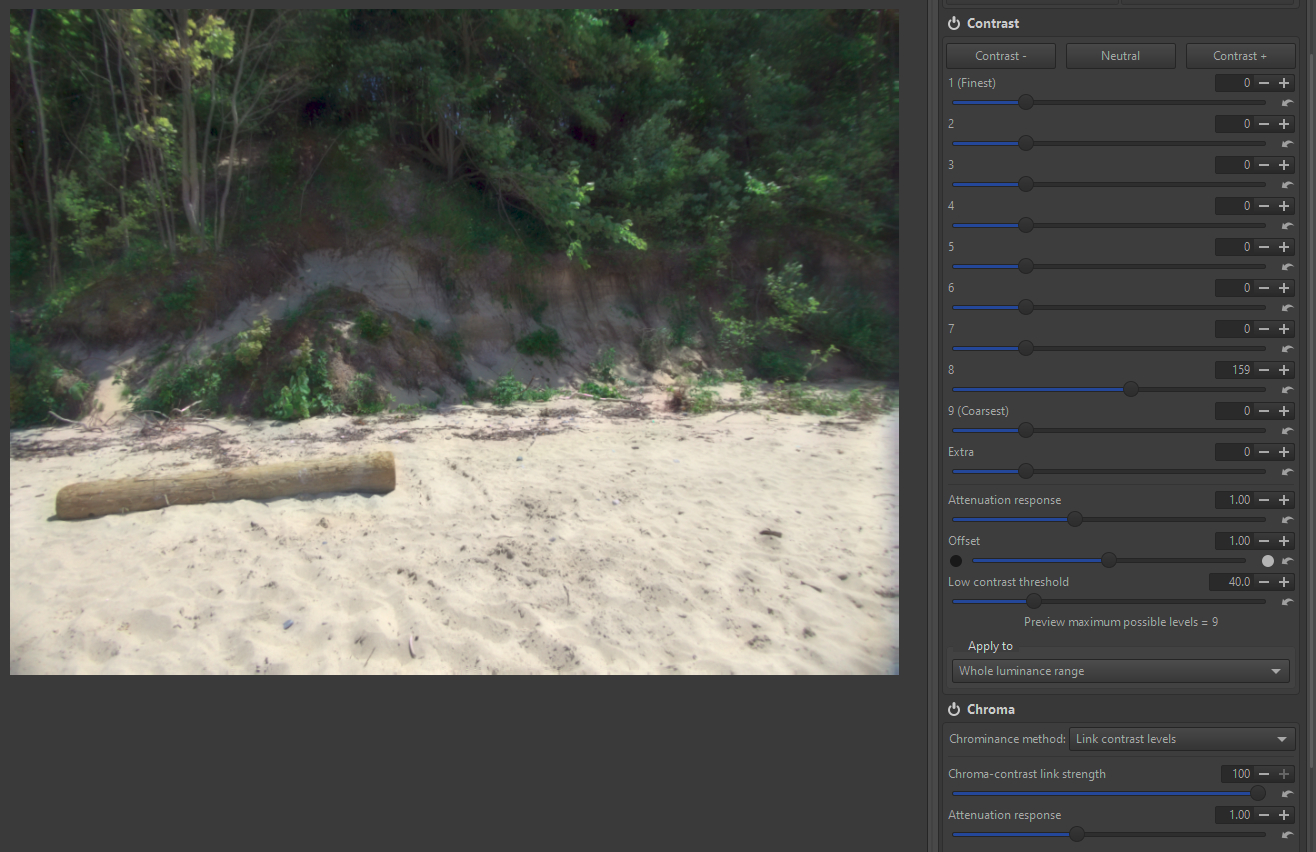 I tried to get the same result using local adjustments but the result is nothing like it. 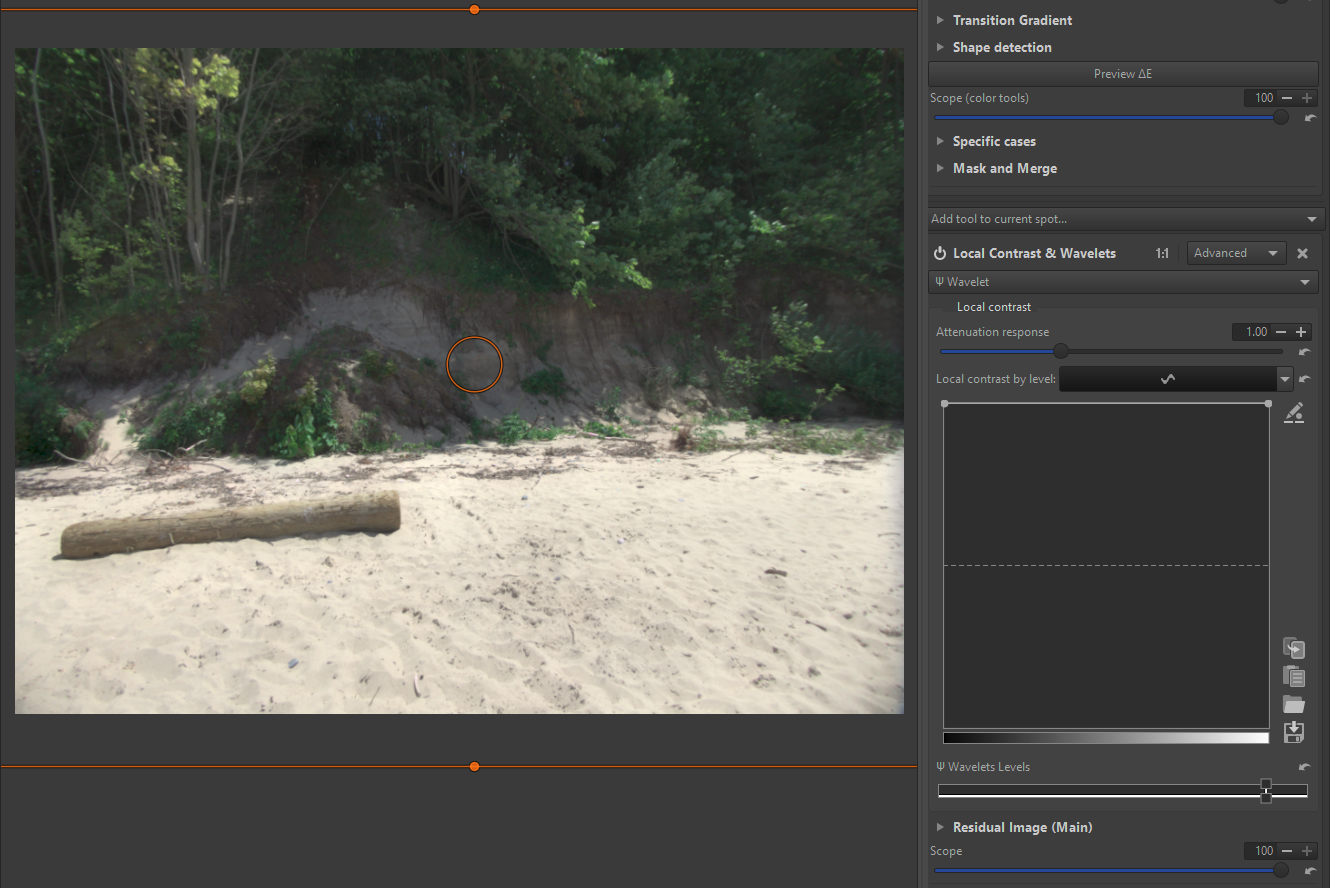 I had to keep the local contrast by level horizontal and raise it all the way to to top to get even this watered down effect.

Is what I want to do just not possible, or am I missing some other tool setting that needs to be changed. (I did make sure that the scope was changed to 100, but maybe I have missed one.) I have attached the Raw and the pp3 with my adjustments set but not enabled.

@RichardRegal
if you want to have a tool similar to “contrast” in “Wavelet Level” you can use in Pyramid2 - “Contrast by level” (check the box, and act on the curve, eventually on ‘attenuation response’) and set the double slider “wavelet levels” to maximum (in your case)

@jdc
Thanks for that. Do you mean this? 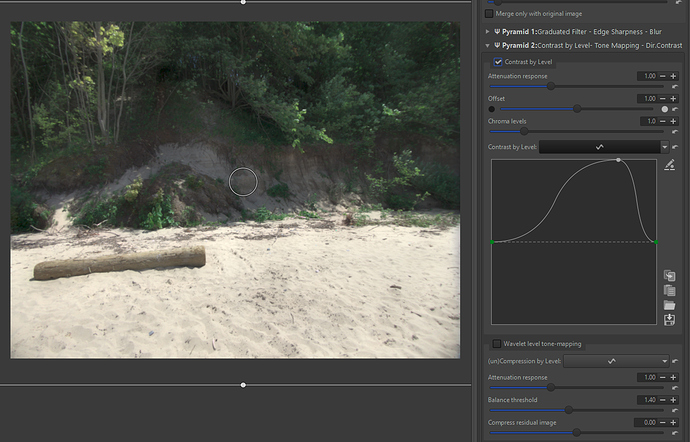 image1315×844 751 KB
I cannot see a double slider wavelet levels but that might be because the latest Windows version is not the latest version.

When you say “Act on the curve” do you mean that I should raise the part that is about 8/10 along to get the adjustment limited to level 8? Also my understanding of “attenuation response” is that it widens the peak (so that more of the higher and lower local contrast areas have their contrast boosted. Is that correct?

The double slider “wavelet level” is the slider in “local contrast”, just under the curve…You can change of course the upper limit, but also the lower limit…(but you don’t have to)

For the curve you can without problem draw your curve horizontal linear after your white point…
The levels in the curve are from 1 to 10…but all levels before the low limit , and after the high limit of the slider “wavelet level” are ignored

The effect of “attenuation response” is well resumed… in the tooltip, it the same as in “wavelet level” (main)

As for attenuation response, yes I took my comment from the tooltip. However what I don’ t understand is the interaction between that and the curve.

If we look at just local contrast, we use the double slider to say which wavelet levels we want to affect and then use the curve to to say how much to increase local contrast for each level of existing local contrast. If that is the case then surely the attenuation slider does nothing since according to the tooltip all it does is control how quickly the effect of contrast increases dampens, which is what the graph does anyway.

Which curve and what do you mean by the white point?

The levels in the curve are from 1 to 10…but all levels before the low limit , and after the high limit of the slider “wavelet level” are ignored

Again, which curve? I do not see any curve that has levels shown on any of the axes.
Now, if you mean the curve for local contrast then I would have thought that setting the wavelet sliders to level 8 and putting the curve at its highest would duplicate the effect of a wavelet level 8 contrast boost on the advanced page. The problem is that it does not.

Pyramid 2 is even more confusing. Although it is meant to adjust contrast by wavelet level there is nothing I can see that lets me select which wavelet level gets what amount of contrast increase.

Clearly we are both losing something in translation (and these are not simple concepts in the first place). Is it possible for you to use the Raw and the pp3 I posted just to make the adjustment you mean and then just post the pp3?

It also occurs to me taht the controls use the word “level” to mean different things. In the pyramid2 contrast by level section, does the level refer to the wavelet level (1-9) or the level of local contrast (low to high)? Is it possible that in some parts of the toll it means wavelet level and in other parts it means local contrast level?

To avoid misunderstood (it is my fault), I change the location of the double slider “wavelet level”
This slider is common to all tools 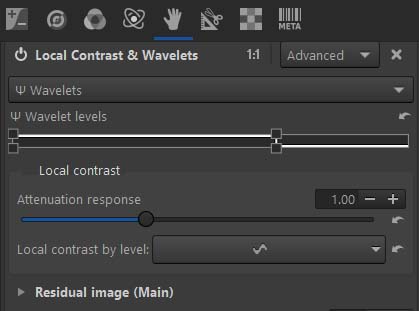 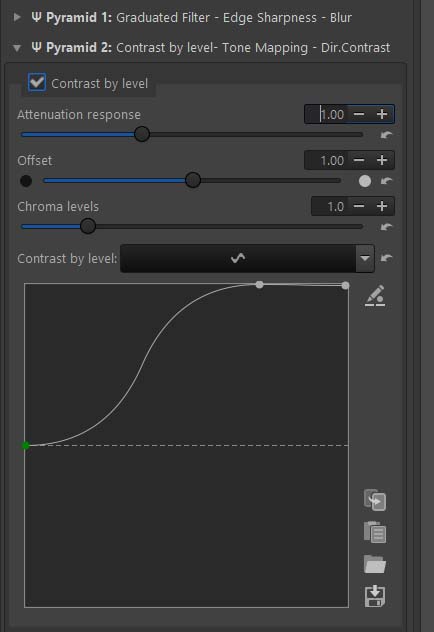 I just says that I you have choose as max level 8, all the part of the curve after 8 is ignored…Then you can draw what you want. Same thing with the low levels.

In pyramid2 , on x axis “contrast by level” it is the level of decomposition from 1 to 10

in “local contrast”, on x avis it is the “local contrast” from low to high, but this curve is applied to all levels - selected by slider "“wavelet levels” (and its action take into account the specificities of local contrat of each level)

Your English is much better than my French. I only wish I could phrase the questions better.

A slight change of subject first. On the local contrast curve, it might be better if the black to white “wedge” under the curve were to be replaced with a double wedge like below to clarify that we are going from low contrast to high contrast.

On the pyramid 2 contrast by levels it is really difficult to see how far along the X axis is wavelet level 3, how far is wavelet level 8, etc (Perhaps a graphic consisting of numbers at the bottom of the graph would help).

Using your tips I have tried to duplicate the effect of just using the contrast adjustment on the wavelet tab but I have not been able to do anything that achieves an adjustment of the same magnitude (or even quite the same effect).

For the past few days there has been nothing below the curve.

I don’t know how to change the shape, or the graduations under the curve. I know it would be better, but it’s outside of my skills. Maybe a developer knows how to do it?