How to temporarily preserve settings?

I’m pretty new to Darktable (DT) so my terminology may lack precision. By settings I mean everything I’ve done, in the process of developing an image, to put it in its’ current state. I’m thinking this should mean whatever is stored in the sidecar (.xmp format) file. The idea being that the development process amounts to fiddling with lots of different settings (?) that alter the resulting image. There are points in the process where one might be sufficiently satisfied that they’d want to be able to return to that state, after making subsequent questionable changes, and start over.

In Rawtherapee (RT) this can be done by saving the current instance of the processing profile (i.e., sidecar file) content. There are different ways to do this. For example, another unique sidecar file can be created by the user which can be later restored. This can be done as often as is desired. Another method is to save the contents to the clipboard which allows it to be later recovered. Of course, the clipboard can only be used for a single instance.

I think RT leaves an existing sidecar file (i.e., processing profile) in tact until the editor is exited whereas it looks like DT is constantly updating it (i.e., based on inspecting the file’s properties). I have reviewed the User Manual and read about the History Stack but at present that looks more complicated and error prone than what I’m thinking should be possible.

I’m having a real hard time figuring out how something like save/restore processing profile, which is pretty simple, can be done in DT. Hopefully, DT has a simple way to do something like that even though it has been hard to find. At the same time, I would like to say that I give DT considerable praise for what looks to be an excellent User Manual. I’d be most grateful if someone could either explain (if very simple) of refer me to some written explanation if need be.

You are looking for the duplicate functionality.

Via lighttable view you can use the duplicate button in the selected images module (on the right side) or the more general ctrl-d (after selecting the RAW when in lighttable view), which also works in darkroom view.

In darktable view there’s a duplicate manager that lets you switch/check between duplicates.

You have described a few scenarios of which as @Jade_NL points out duplicates would be used. As long as you don’t compress your history then you can always step back to that point and continue your edit. If you want to do this and keep the full edit then create a duplicate first. You can also make use of the clipboard…and apply that to one or more images… I like the selective copy and paste…Shift Ctrl C and V as you can specify exactly which parts of the processing that you want to apply…

OK, duplicates appear to be close to what I was describing in relation to RT only a bit more sophisticated. In that, just clicking on the duplicates to compare them is easier and more useful than reloading processing profiles stored as files which makes comparison more convenient.

If I understand correctly, history stack allows for return to a prior state by erasing (?) one or more grouped items from top of history stack but that requires using the “Compress History Stack” button in combination with the Ctrl Key in order NOT to compress. Not what I’d call intuitive but does seem to work.

Thanks for the help!

no, if you want to be able to go back you‘d better not touch compress history stack - once the stack is compressed there’s no way back.
If you want to persist an edit, then you‘d better use the duplicate feature - all other ways are just more the less stable workarounds …

If I understand correctly, history stack allows for return to a prior state by erasing (?) one or more grouped items from top of history stack but that requires using the “Compress History Stack” button in combination with the Ctrl Key in order NOT to compress. Not what I’d call intuitive but does seem to work.

Not quite. If you want to go back to an earlier step, and work from there, just select the last (topmost) module you want to keep. The image shown will be the result of the steps up to and including the selected module. As @MStraeten said, do not touch the compress button (*).

Then go back to your editing. The first time you activate or change a module (in the right panel), everything in the history stack above the selected item is erased, and a new item added (corresponding to the module you just activated or changed).

(*)I use the compress button at the very end of an edit to remove all the accumulated cruft created during the editing, so I have a nice compact stack.

Rawtherapee also has ‘snapshots’ in the lower left corner.

But in almost all other software - including Darktable - something like ‘duplicate’ or ‘create virtual copy’ is what I use for these occasions. The duplicated version can be reset (‘discard history’) so you are back to defaults.

. The duplicated version can be reset (‘discard history’) so you are back to defaults.

Or you create the “dupicate” by clicking on the option “original”, which gives you a new default stack

I’m looking, but where is this ‘original’ option?

For me, the “duplicate manager” has two buttons at the bottom, “duplicate” and “original” (in that order) 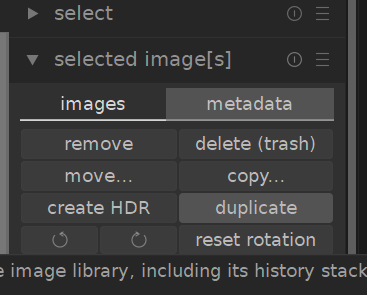 What is the ‘duplicate manager’? I just have a ‘duplicate’ button for the current selected image.

Oh wow, never noticed that. That’s even handier then

Many thanks to all! There are lots of tips included herein that are very useful to me.

I’m enough of a novice that the “Snapshot” feature of Rawtherapee was news to me. While I haven’t yet had time to exercise it, I am looking forward to using it. Looks like it makes for a nice improvement over what I’ve been doing.

The ability to preview duplicates with a simple mouse click is also very nice and creating a duplicate as an “Original” also sounds quite useful.

I’m most grateful for being told about these features before spending a lot of time without knowing about them.