I think this is called a Gerbera Daisy?

The kids next door gave it to my sister for Mother’s Day. This is just shy of a 1:1 macro. I needed a little wiggle room to nail the focus where I wanted.800_1971.NEF (38.9 MB)
This file is licensed Creative Commons, By-Attribution, Share-Alike. 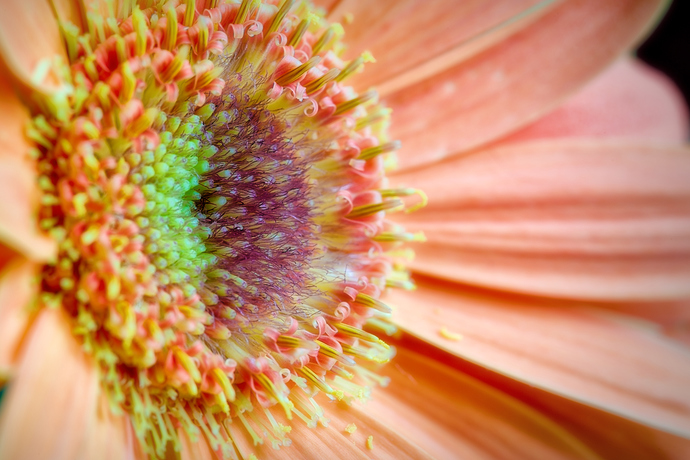 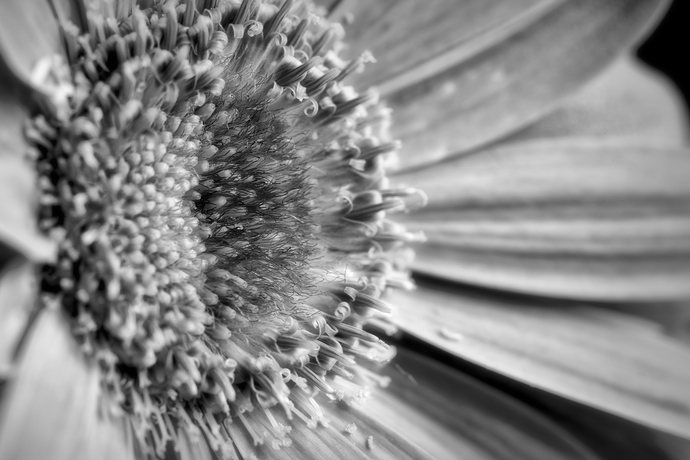 Update.
OK Inspired by @Claes and @XavAL I took a few more shots. 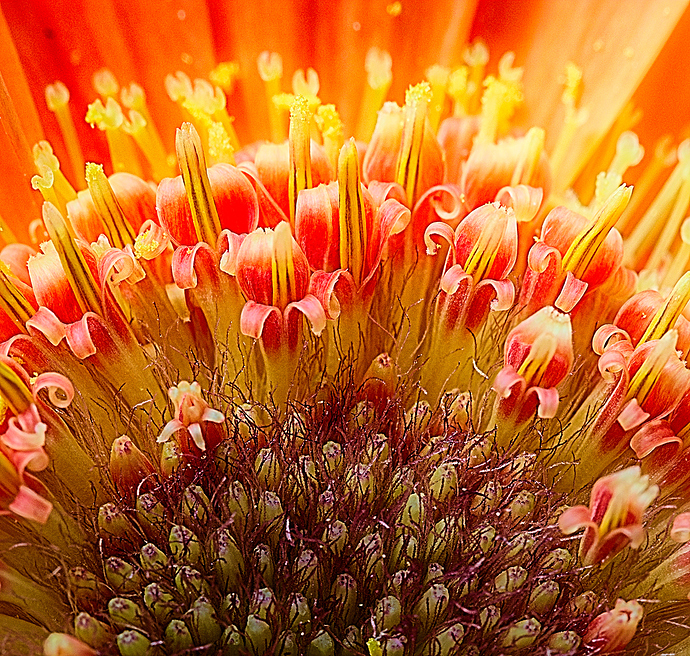 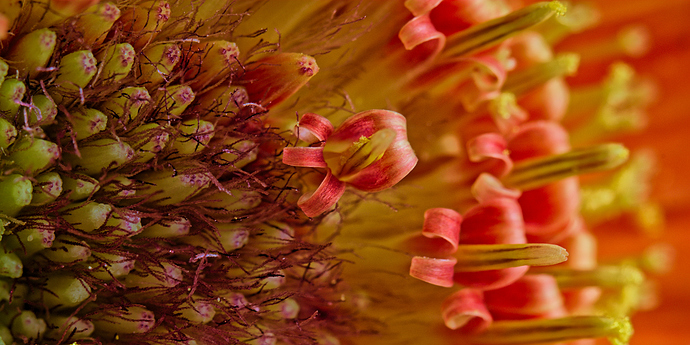 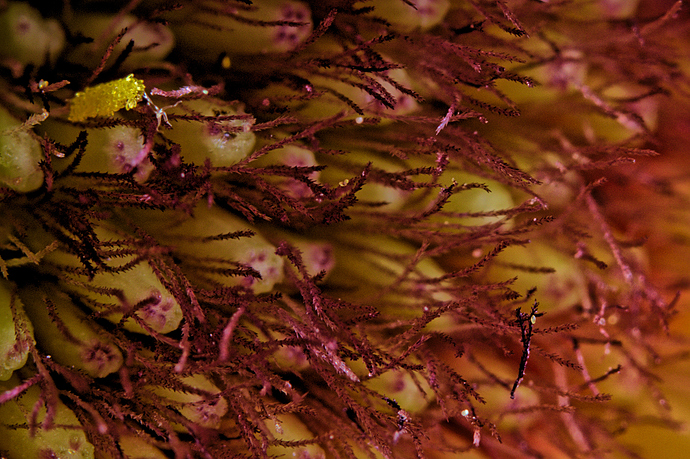 Anybody know how to calculate the magnification?
Have fun!

Nice shot: thanks for posting it 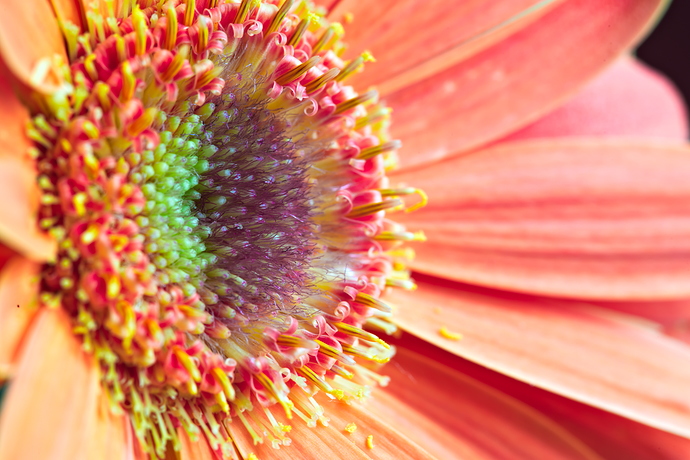 Have you noticed all interesting things that go on in the centre of the flower? 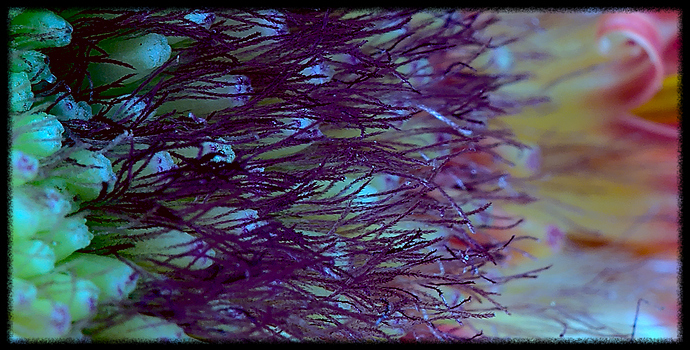 Beautiful! The shot and the flower…

My dad had a flower-shop and these have such soft petals and sharp looking carpels/stamens/pollen. Made my edit with that in mind: 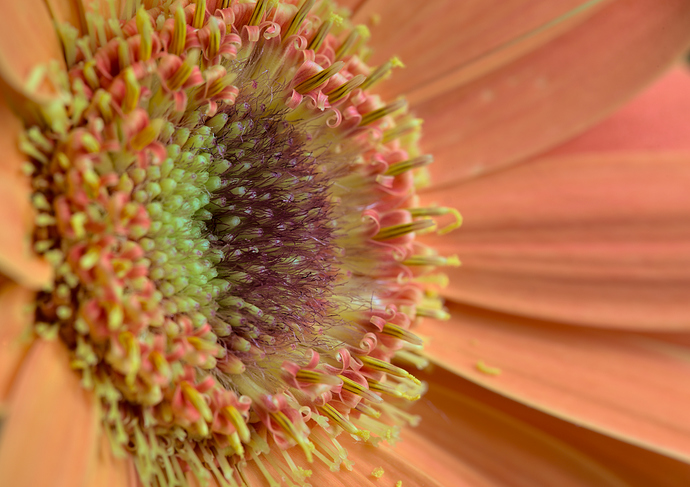 Thanks for sharing this one!

@Claes Oh yeah! That gets me to thinking about adding an extension tube and giving it another shot! 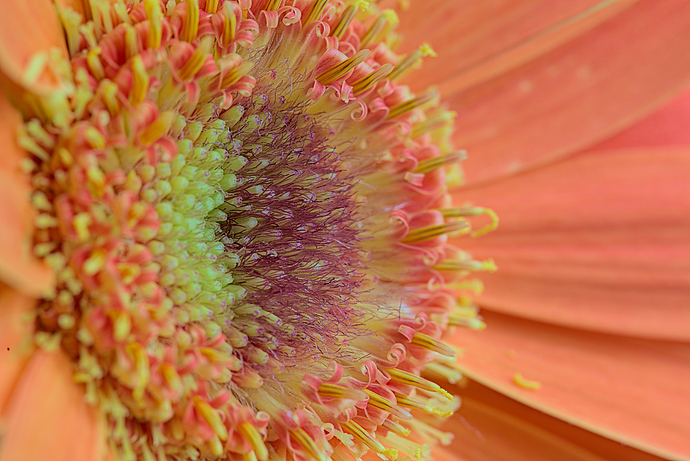 And here black and white versions: 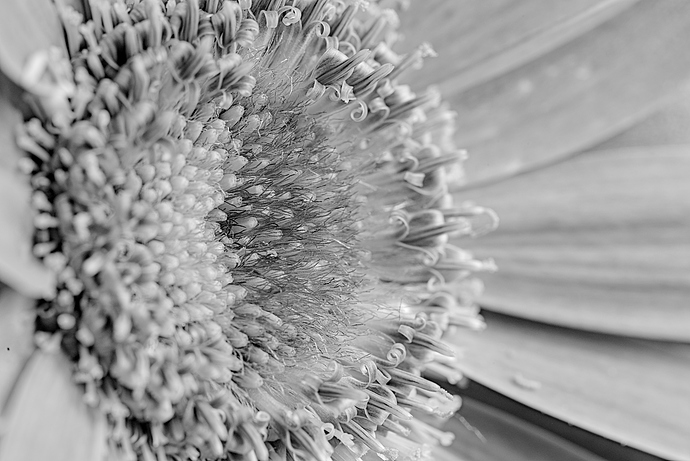 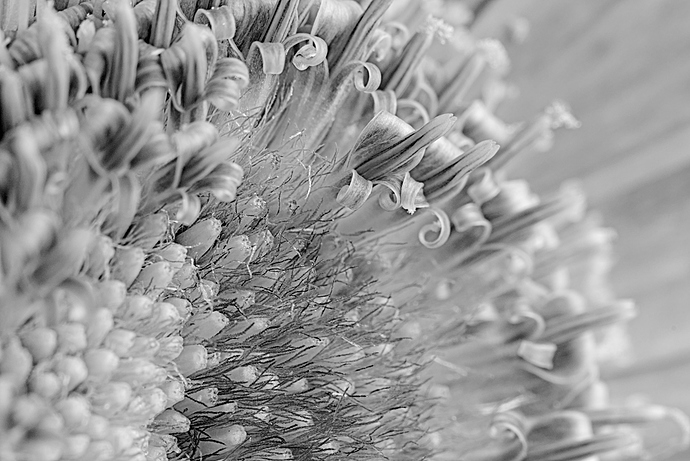 @Thomas_Do Very nice! I’m looking forward to examining the .xmp files. I’m guessing the second is a crop from the first?

I’m guessing the second is a crop from the first?

Yes, there were so many nice details, I had to “enlarge” them to make them visable (following the idea of @Claes). The b/w version is based on the color edit. Starting with b/w from scratch, might be better.

@Jade_NL Thanks and you’re welcome respectively! The flower was sitting on the window sill above the kitchen sink. I thought that the right “half moon” was a shadow but by getting a closer look, I could see that wasn’t the case. So, out came the 180mm macro. I was tempted to focus on the stamens on the outside of the “hub” against the soft petals, but decided to stick to what caught my eye to begin with and pretty much focused on dead center of the “hub.” 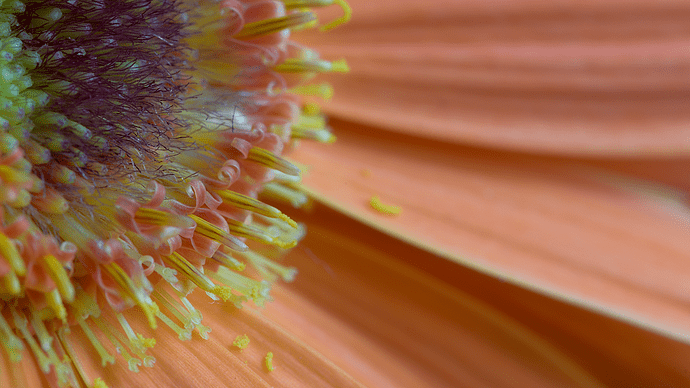 Nice lens, by the way.

Anybody know how to calculate the magnification?

At those magnification ranges the best way is to shoot a ruler or something with known size right after the subject, without touching the focusing ring, nor autofocus again

EDIT: sorry, that was a lazy explanation

The idea is that you have shot both your subject and the known size object with the same focus settings in camera. That way both have the same (unknown yet) magnification.

After that, within your preferred application, you pick a measure horizontally or vertically from your known size object. Let’s say it’s a ruler: you pick e.g. a distance of 20mm horizontally.

Next, you somehow measure the pixels contained in that distance: let’s say there are 3000 pixels in those 20mm.

Hope this is a better explanation

I appreciate the effort. I can recall reading something a while back about calculating the magnification based on focal length of the lens and what you would have after adding extension. It may have been in a Nikon bellows manual, but I really can’t remember. Perhaps someone here will know but it’s not really important.

I didn’t say it was the only way

That formulae are based on lenses focused at infinity, if I’m not wrong. In such case, if you double the focal length with extensions, then you double the magnification ratio of the lens (at infinity).

The problem with modern lenses, specially those that have internal focusing, is that when you focus something closer, the effective focal length changes internally, so you will never know the real length, just the magnification you get on sensor (and that is a priori unknown).

Take into account that they talk about Nikon lenses, but at infinity, any lens with those focal lengths work the same.

A note: even though the say otherwise, when going macro the best apertures are usually one stop down the max aperture of the lens. And that means a really shallow depth of field.

@XavAL Actually, I think that file is what I have seen in the past because I have a PB-6. About what you said about the magnification at infinity, I read something about getting a better depth of field with a long lens by adding extension and focusing at near infinity. It didn’t apply to macro shooting though, if I recall correctly.

About what you said about the magnification at infinity, I read something about getting a better depth of field with a long lens by adding extension and focusing at near infinity. It didn’t apply to macro shooting though, if I recall correctly.

Using a lens which does not change focal length when focusing (for example simple old 50 mm primes), using an extension ring of say 4mm does not make any difference than changing the lens focus to move the lens 4mm from the sensor.

Yes. It doesn’t really make any sense with really low magnifications. The advantage starts to be apparent when the lens can’t focus any closer, and then you can only use some gadget to increase the distance from the lens to the sensor. Or change the lens itself…

Then things start to get complicated because the «elongated» lens doesn’t usually have good aberration corrections at such magnifications, but that’s another story… 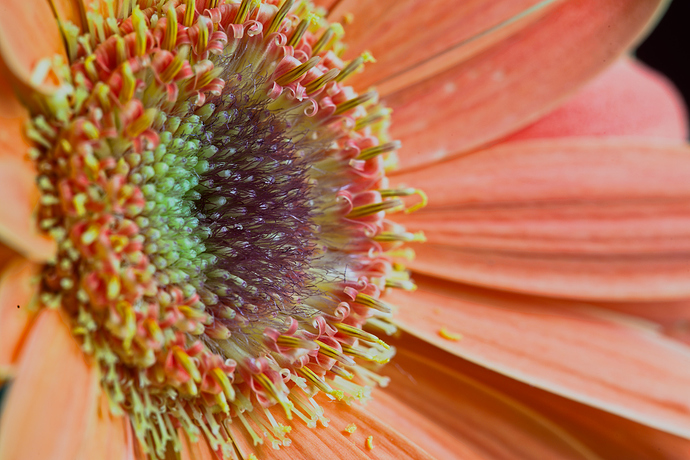 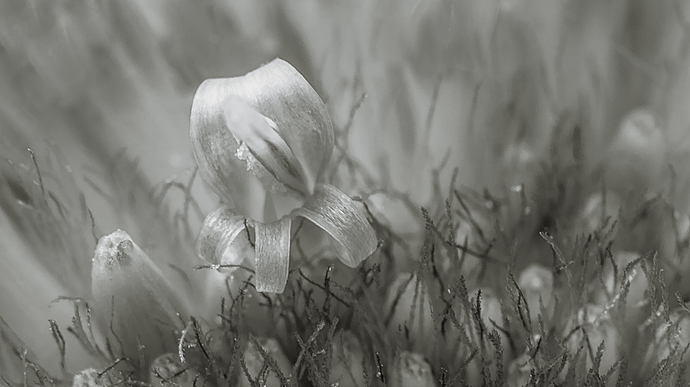 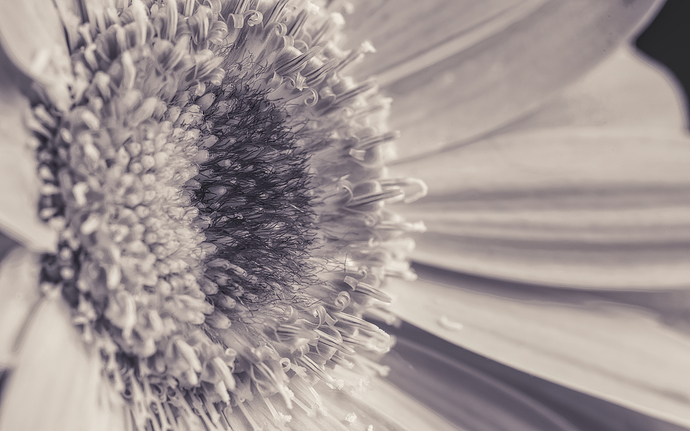