Well, I have a toddler, so cannot get out to any really dark skies to shoot Neowise. This is the best I could do shooting from a parking lot down the street from my house. There seems to be something that could be done with the dehaze tool in DT, but it’s a trade off of increased clarity versus increased noise. Would love to see other attempts at taming this, DT or other softwares… I know that stacking with Siril or something is the best, but frankly I only have time for single shots these days! 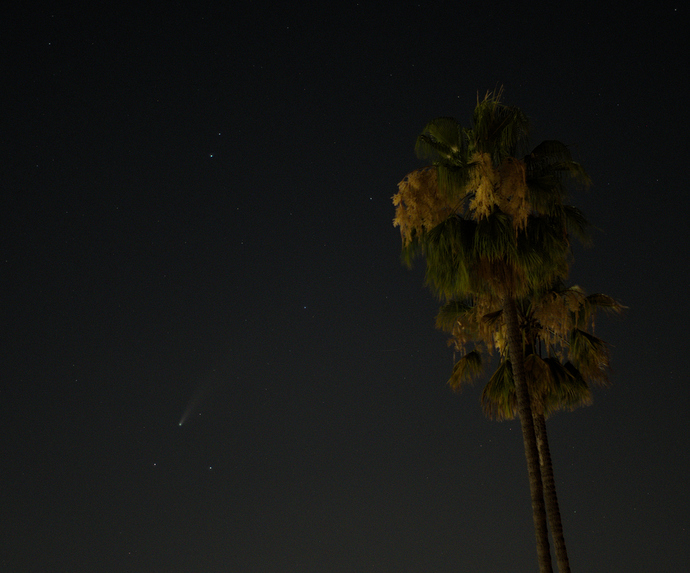 I played a little and my honest thought is you need a couple more pictures so you can bring out the detail of the stars/comet out of the light pollution threshold.
and I would likely do a shot by itself just to expose the tree the way I would want.
then mask the good star data in via gimp after processing the stars in Siril

I didn’t do much, just clipped both eds a bit in darktable with ‘levels’. And a light crop. Nothing else. 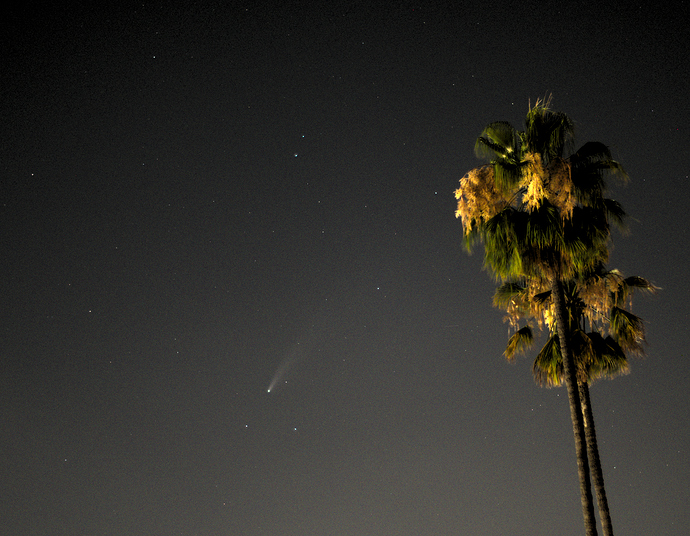 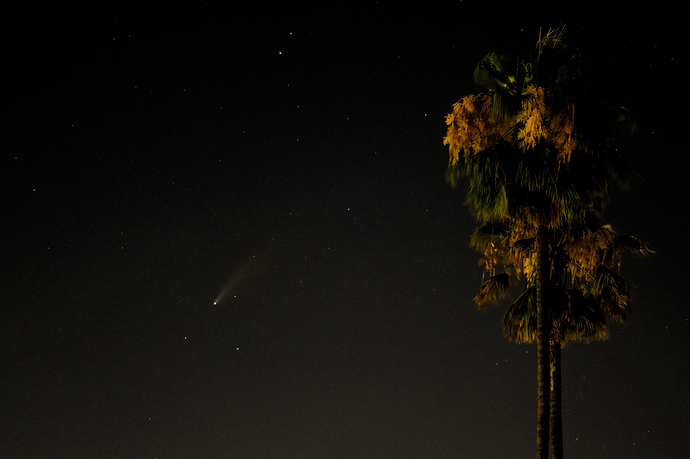 Sky was cloudy here the last days. I will try to get a shot tonight. 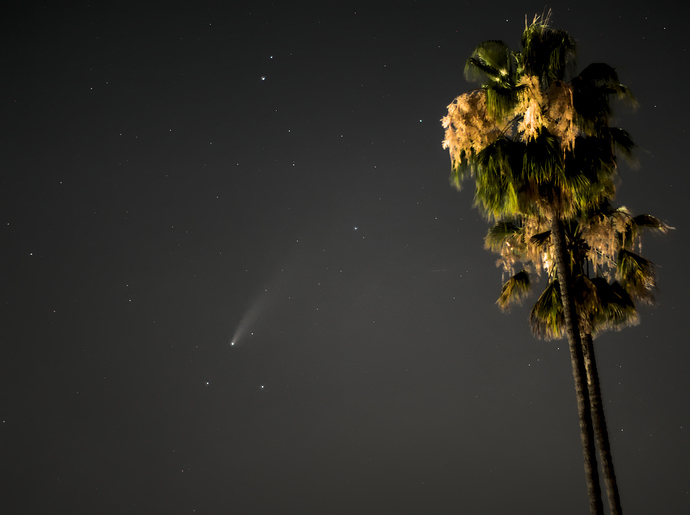 @Thomas_Do This looks great! I’ll have a look at your xmp… Good luck with your shot!

Slightly off topic but I just ended up embracing the city lights for this neowise shot: 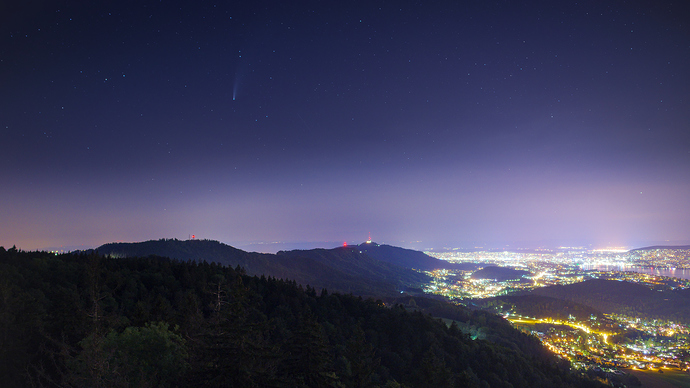 Regarding the topic, I think Thomas already pretty much nailed it. I do like the equilateral triangle between neowise and the two stars in the shot. Did you plan that or just sheer luck?

also consider a light pollution filter if you don’t have time to stack some shots.

@Jonas_Wagner Great shot! Yeah, seeing the city lights is awesome, and really sets a nice mood. Luckily Neowise is bright enough to be seen even in light polluted areas. I was just getting jealous of all those posts on my social media from folks who went out to the desert at 3am and got crystal clear shots of the two tails, lol! Oh, and the triangle with the two stars in my shot was an accidental fortuitous alignment!

@Magnade Good idea!I have seen those, but never investigated into to it. Do you have one? Does it really work well?

@Jonas_Wagner how did you measured light in that situation? ETTR? I’m thinking about the much brighter city lights, opposed to the dark sky.
This question also applies to @isaac, since you also have some bright light in the foreground.
I’m thinking of trying to capture the comet, and I’d try the Siril way.

@gadolf I did some reading for exposure advise. I had tried the night before with a very long but dim lens (600mm equiv, but only f6. 7), and all my stars and the comet had blur from sky movement and the shots were either much too dim (approaching -2.0 EV) or had a lot of high ISO noise. Here’s an example: 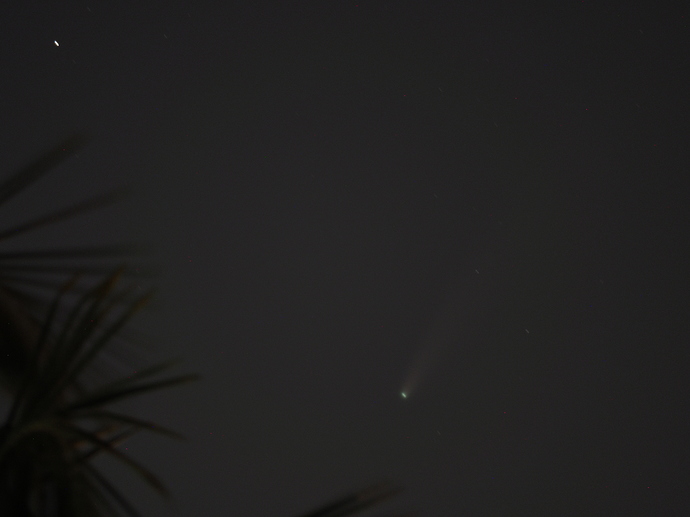 The advise I read was that unless you have a star tracker, stick to medium telephoto or moderate wide angle, use the 500 rule to set the shutter speed, use the widest aperture possible (manual focus on a star or the comet), and then dial in exposure with ISO. So that’s what I did the next night. In the main shot in the OP, I’m using a 100mm equiv. f1.7 lens, so the longest allowable shutter speed was 5 seconds, which allowed for a shot at base ISO (200) at about -0.7 EV. This gave a nice exposure of both the sky and palms with sharp stars and comet, however, I needed a shorter shutter speed because there was some wind and the palm trees were moving too much for 5 seconds. So I boosted the ISO to 640, which let me get down to a 2 second shutter speed at the same EV. It took a couple of tries to get an interval with low wind so that the trees would not be blurry, but eventually that worked. Even higher ISO (1200) allowed for much faster shutter speed, but too much noise in the sky, so the ISO 640 shot was the one I eventually went with. All together, I only had about 15 minutes to get the shot, so could not play around too much with various exposures. For my scene and camera (Olympus OMD EM1ii) -0.7 EV seemed to work and allowed a lot of leeway for shadows and highlights in post. For ETTR I think I would have had to boost the ISO too high for the needed shutter speed. 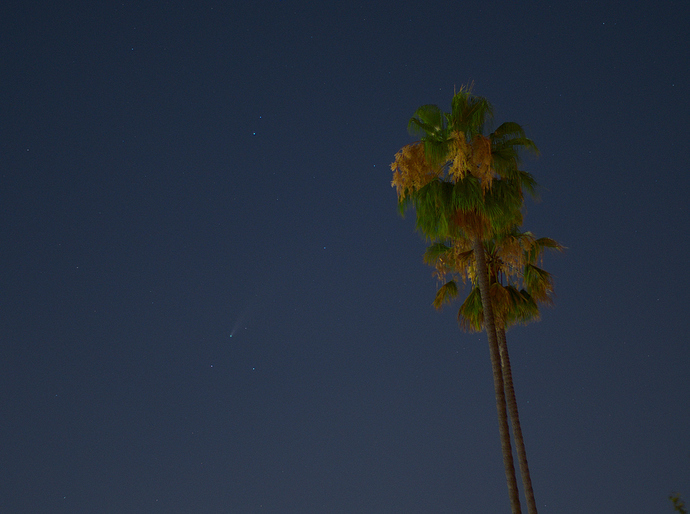 Good luck with your shot!

Thanks, I made it. Conditions were not too good, because there was still some light from the sun on the horizon. With the naked eye Neowise was barely visible but the image came out nice. 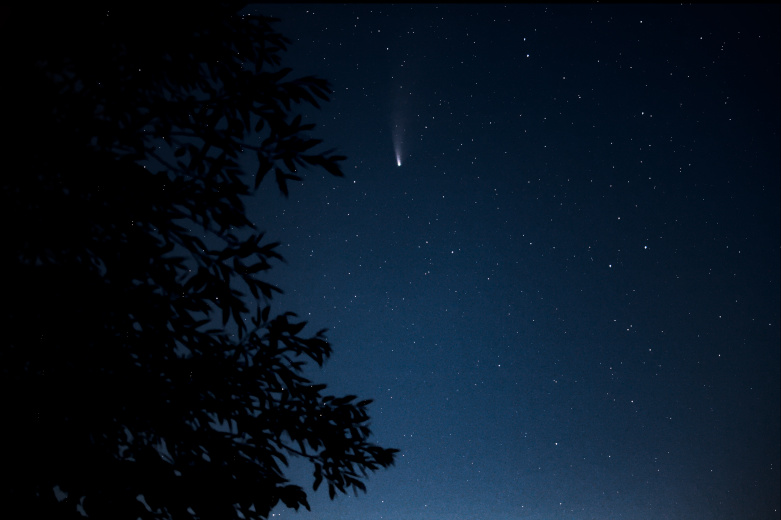 @gadolf
At least on the cameras I own exposing to the right doesn’t help much. Clipping the colors of the stars or in my case city lights is my bigger concern. I tend to set iso so that I don’t clip anything but can still see something when reviewing the photos on the camera. There are cameras where switching ISOs can have more drastic effects though. Googling for ISO invariance should give you some more information on the topic.

Shutterspeed I usually set a bit bellow what the 500 rule mentioned above would yield, especially when stacking. When on a smaller sensor you might want to go a bit the other way. In essence you are trading of noise for motion blur here.

Aperture really depends on the lens but in general stopping down just a bit is a worthwhile trade-off.

@Magnade @Isaac I do have a didymium filter but I hardly ever use it. I think part of the problem with the one I have is that the anti reflective coating is not good enough so glare is a problem. When there is foreground in the frame the color shifts are also not simply fixable by white balancing. The other increasingly big issue is the move from sodium to led street lamps. From my little experience what works best is just applying a low cut filter. What I would still like to investigate is using the difference between a picture with and without the didymium filter as a guide for removing light pollution.

@Jonas_Wagner
a simple test with 6 pictures 3 without a filter and 3 with. stack and see how it acts.
who knows you might want to mix the set of 6.
I have heard the LED street lights can be an issue if they didn’t stick to a ~2000k color temp.

@Isaac
I’m lucky enough to live far enough away from others I can avoid having to use light pollution filters as such I’ve not spent the money on them.
and I’ve been rather bad about anything astro of late I tend to buy stuff and never use it so I’ve stopped buying anything until I use what I have for 6 months.

I have heard the LED street lights can be an issue if they didn’t stick to a ~2000k color temp.

It’s not the color temperature that matters it’s the spectrum. Take the absorption spectrum here for instance:
https://www.hellma.com/en/laboratory-supplies/certified-reference-materials/checking-wavelength-accuracy/didymium-glass-filter/

That happens to absorb a lot of light at the emission peak of sodium lamps.

I will admit I went lazy on the comment. There are amber LEDs for street lights that put out less blue in their spectrum. I don’t think they match sodium lamps but are likely much easier to filter either way.