Is there a definitive list somewhere as to which plugins are currently available, particularly for Linux, and how to install them?

The absolute defacto standard would be: http://registry.gimp.org/

There do seem to be doing renovations to the site though, might try the glossary page instead: http://registry.gimp.org/glossary/a

@patdavid what is going on with http://registry.gimp.org/? The last mail on the mailing list was last month.

I run Gimp 2.9 from otto-kesselgulasch - gimp-edge ppa in an old notebook using Kubuntu.

Same as any Gimp you can find folder locations using Edit → Preferences → Folders. 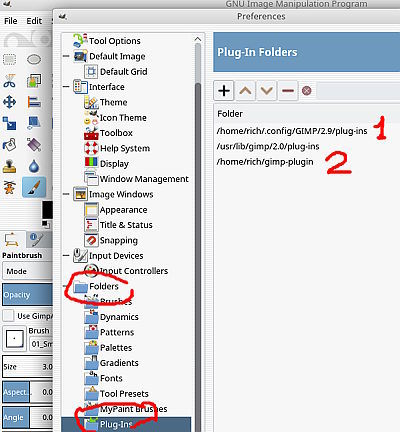 nothing to stop you adding a more convenient folder location (2)

Face reality, http://registry.gimp.org/ is dead as a dodo. The glossary is tedious to use. Best way to find anything there in general terms, is a google search.

When it comes to Gimp 2.9 plugins, most throw up deprecated procedure warnings and more than a few do not work at all. Python plugins can often be fixed relatively easily but old compiled plugins are going to need some serious attention in the future. Anyone got a separate+ 100% working?

You can run Gimp 2.9 with the switch --pdb-compat-mode=on

Not really a solution, these old plugins need fixing and not only old ones. There are scripts written last week that throw up deprecated procedure warnings.

A new general repository for scripts and plugins would be a good thing, but who is going to host it? A thankless job.

I followed the link above and found around 8 scripts/plugins that were based on gimp2.8 or earlier, and they seem to work fine under @Carmelo_DrRaw’s gimp appimage. No issues at all.

I did have otto’s build of gimp 2.9, but found that what you said was true regarding old plugins. But the same doesn’t seem to be true with the appimage. Not sure how that works, but it just does.

What I’m keen to find out is how to apply the plugin registry to the appimage, so I can have more options at my disposal.

“Deprecated” warning in the name of the game with the development version. If you have the error console dialog somewhere in your docks these ill appear there and not bother you.

AFAIK there is work going on on some “official” repo for v3, that will allow you to download/install scripts and plugins directly from Gimp.

I don’t know if this helps, but on Linux you can select a large collection of plugins for Gimp 2.8/2.9 via a Software/Package manager, like Synaptic or Software Center. Just look for gimp-plugin-registry. In Gimp 2.9 indeed lots of warnings, but functionality-wise intact, it seems.

Yes, the actual http://registry.gimp.org is deprecated and is no longer being maintained. It is currently in “archive” mode as we wanted to leave the resources up while we switch things over.

I had a (sometimes heated - but in a good way) discussion with Jehan and Joao about what we would like to stand up as an alternative. In the end the registry and scripts will become integrated into GIMP proper with a mechanism for searching, finding, and installing assets directly from within the program.

The back-end feeding this is probably going to be some sort of federated, distributed option.

Of course, just like any of the projects here, it can come faster if we can get some hands on deck…

Ah very good. From reading the mailing list, I thought “why not make it a git repo?”

Yes, and parts of it can be. That was part of my original discussion. I wasn’t thinking big enough, though. The distributed sources can be git repos (or anything), and they get federated inside GIMP in a UI of some sort (I am supposed to mock something up soon). Think of it more like apt repositories, and less like a central website…

I don’t think I understand what you mean, but I should wait for you to draw it up

I’m running Partha’s gimp 2.9. Python plug-ins are giving depreciation warnings, which are fixable. There may be a couple of other issues, which I will contact Partha about.

I have been told that many scripts and plug-ins will probably not work with 2.10

“If you have the error console dialog somewhere in your docks these ill appear there and not bother you.”

Hey thanks, didn’t know that!

A VERY good new for me: the excellent and indispensable indexprint plugin works with Gimp 2.9.5 (at least for me)
http://registry.gimp.org/node/24503