Before the month of June comes to an end, we had to release a new version in order to keep the cruising rhythm started after the release of version 1.0.

Siril 1.0.3 is distributed for the 3 most common platforms (Windows, MacOS, GNU / Linux). Check out the downloads page.

But of course, as Siril is a free software, you can build from the sources, available through the installation page.

This version 1.0.3 has very few new features as it is above all a stabilization version of the 1.0.2 released last month. It contains mainly bug (and crash!!) fixes reported by users and reported on this page. However, once again, a new tool has been added: the generalized hyperbolic transformation.

Of course, despite all our efforts, bugs may still exist. If you think you have found one, please reach out to us through the forum. Even better, do file a bug report there if you see it is not already listed as a known bug.

Adrian Knagg-Baugh is the main author of the generalized hyperbolic transformation implementation in Siril. Indeed, starting from a discussion on the forum of astrobin, David Payne, an amateur astrophotographer, elaborated a whole series of equations using the PixelMath tool of PixInsight. Their purpose was to simplify the stretching applicable to a linear image. These equations, based on hyperbolic stretching, are perfectly suited to the stretching of astronomical linear images:

Based on this work, a second contributor, Mike Cranfield, developed a script for the same software based on this suite of equations. This simplified and improved the work started.

Then Adrian coded the tool for Siril. The tool is offered in a simplified version in 1.0.3 but will exist in a much more complete implementation in the future 1.2.0, which is in very active development.

Dialog of the tool as presented in the version 1.0.3 of Siril. Example of the same image processed on one hand with the histogram transformation tool and on the other hand with the generalized hyperbolic transformation. Note that the latter preserves the size of the stars and the center of the galaxies. All the controls present in the dialog allow a fine adjustment of the image. A word about the future #

Siril is in a phase that it has never known before: 3 developers are working hard on new features and on a complete redesign of several points. There may be as many changes, if not more, between 1.2.0 and 1.0.0 as there were between 0.9.12 and 1.0.0. The version currently under development is numbered 1.1.0. The second number, when it is odd, means that the version is said to be unstable. There are currently many changes and it would not make much sense to list them all here. However, we can list the main new features that will be present in this future version which release date is not yet known:

Contributors: Contributors to this release are: Cyril Richard, Cécile Melis, Vincent Hourdin, Adrian Knagg-Baugh, Mike Cranfield and David Payne. We also want to thank all the beta testers and especially Fred Denjean, for his gift to find bugs.

Developing software is fun, but it also takes up nearly all of our spare time. If you like Siril and would like to support us in continuing development you’re welcome to donate a small amount of your choice.

OSC_Preprocessing.ssf error
“The script you are executing requires a newer version of Siril to run (1.1.0), aborting.”

Can not run the script. I changed the required line in the script to 1.0.0

Can not run the script. I changed the required line in the script to 1.0.0

This is the best way to have scripts that fail.

I tried to look through the Siril Github repository to see which line of code is used to check the version of Siril but could not find it.

Yes changing the the line “requires 1.1.0” or similar line in any program can cause issues, but in this case changing this line to 1.0.0 temporarily fixed the issue.

So you got scripts from another way but not with the official package. And if you really use the 1.0.3, a lot of commands in the scripts won’t work. 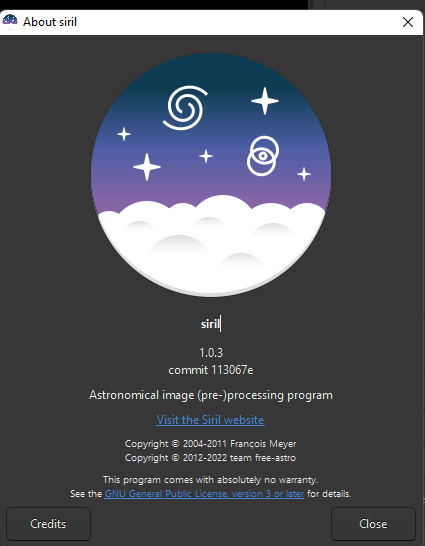 I do have two folders I store scripts. The second folder is modified version of the standard scripts. The installer updated my modified version of the OSC script I use. For me this was an unexpected result of running the installer. The second folder was synced with the master branch and not the 1.0.3 branch, but there is no .git folder in my second Siril script folder that would instruct Git to sync with the master branch.

This might be a Gitlab sync issue and not an issue with Siril, but what lines of code in the installer might trigger a Git pull or similar action to sync with the master branch instead of v1.0.3?

Hi, None. There is no pulling scripts though git involved in the installer script (I’m assuming Windows), see there: build/windows/installer/siril64.iss · 1.0 · FA / Siril · GitLab
We just copy the ones present in the branch being built (1.0 for v1.0.3) to C:\Program Files\SiriL\scripts

Thanks for the info. Definitely something I did, but I don’t know what I did. I will rename my modified scripts and rerun the installer to see if it happens again.
Once again thank you for your help.
Daniel

Good work and a big thanks to the Siril team. GHT works a charm. On the left is using asinh, histogram stretch and on the right is using GHT.