Unleashing the power of Shapes !

Yes, it’s clear that this kind of algorithm would optimize this work. However even a simple cloning tool works very well as long as you can vary the source as you go along… The brush tool is perhaps the most suitable for this…?

Let’s make one thing at a time. Once the Polygon shape are merged, I’ll see if it’s possible to enhance the spot tool with non circular shape, if @agriggio permits.

I have an lx100, and it’s terrible for sucking in dust. A vacuum cleaner with a specially constructed paper tube over the lens did the trick though. Also I found an old fashioned camera shop that was able to clean the sensor for a very reasonable price, so it is possible.

Thanks for this tip :clin d’œil:. I had seen a video of a guy doing pretty much the same thing with a plastic bottle. I absolutely must try …

@jllailes The tricky bit is finding something that will fit over the vacuum cleaner nozzle at one end and your lens at the other. That’s why I found a stiff paper cone shape worked as it was easy to adjust. It’s a shame that, an otherwise brilliant camera has this flaw.

As far as I know all fixed extending lens cameras have this issue. Ricoh GR users and also suffer dust eventually.

. This is my device by that of @jllailes . I agree with you, it’s a shame because this little camera is a marvel

Oops sorry about that. Aware that I am creating away from the topic here too…

New improvement merged today in ART : per shape and global feather and blur value handling (see the 2 additional sliders in this screenshot. Also, the sliders are only available when Edit mode is on now. 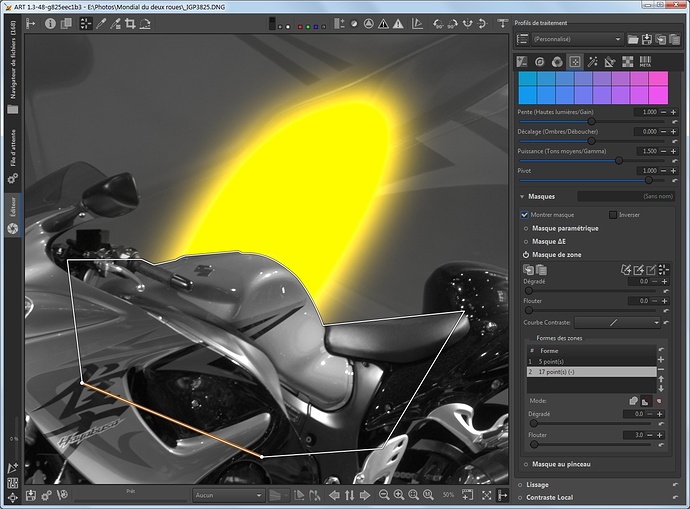 Why doesn’t this just merge into the regular RT?

Because local editing through masking doesn’t exist in RT. Of course, the GUI part can be merged back into RT, but the engine need to be adapted to this kind of local editing. And as usual, it’s a question of available time and agreement.

The good news is that the GUI part can be merged back with minimum rework.

Great job Jean-Christophe, Alberto, and all other contributors!

There should be a better place for this, but here is the documentation of polygonal shape creation (copy/pasted from bitbucket) :

Here is a step-by-step tutorial:

It’s very simple : just alternatively create points with sharp corners (roundness = 0, by using the Ctrl modifier key at creation time) and points with totally round corners (roundness = 100, by using the Ctrl + Shift modifier key at creation time). You end up with a series of Bezier curves of degree 3. The sharp points should be located on the border you want to draw, and the round points are used to control the curvature, so it won’t usually be on the border.

@hombre the Wiki would be a better place indeed. I’ll try to copy/paste this there if you agree

Good point. @hombre how do you want to get credit? Nickname or full name?

Full name (and thanks @paulmatthijsse