Okay so sure for color accuracy definitely there are things to consider. Using filmic can depending on the settings affect color significantly but you can also compensate. Also since you have one…DT has a feature in the color correction module to use your color checker to tweak color so you can try that. It basically does an analysis of the color after the input profile and after WB and then comes up with a set of channel mixer coefficients to correct the color to better match your color card…perhaps play around with that…darktable 3.6 user manual - color calibration

I tried darktable-chart, hoping it could result in a .dstyle with improved colors to start with. While the result perfectly corrected that chart-photo I used, the resulting .dstyle pulled the next shot from that chart (taken 5s later with like 10° difference in angle) totally into ‘blue’.

(repost, trying to get rid of the wrong upload) 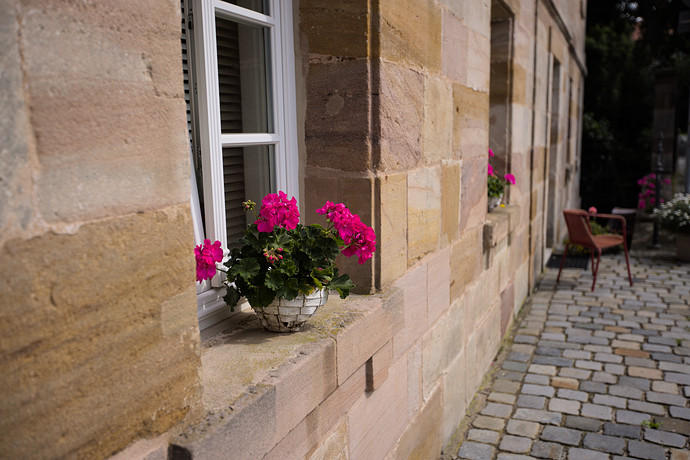 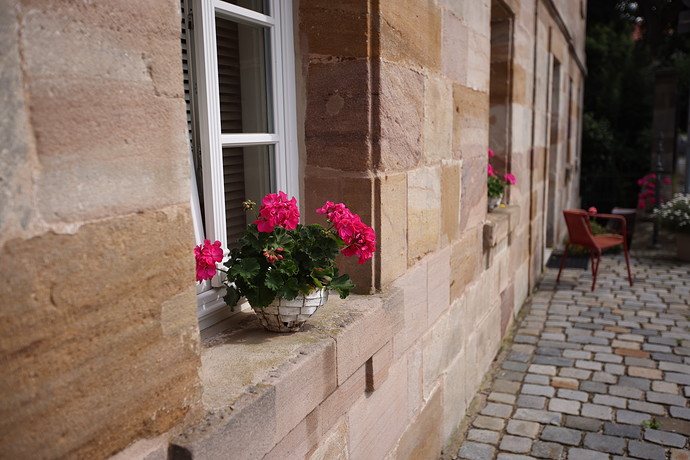 The speed to get a “good looking” result is not the problem. My problem is, that after taking kind of any amount of time to develop an image, on A/B comparisons people (I abused several friends with that) consistently choose the SOOC JPG as the ‘better looking image’.

Attached is a test-snap I just took for this thread. I added my edits (it took me around 5-10mins to get it as it is) as XMP and also attached the SOOC. I even fail to get the correct colors out of it (the SOOC is as good as it could get for a ‘ground truth’ - this is how it actually looks in real life.

The flower’s color is very off and the wall in general is too yellow. Fiddling with the ‘color calibration’ module (i.e. changing the white balance) pulls everything into desaturated/blueish too much.

At the end, I take a picture to “capture reality” as close as possible (I am not an expressionist :)). So if for every single photo, I have to carefully look at the SOOC JPG to not get completely off color, the whole process would be kind of wrong.

For comparison, this is “open & directly export without touching anything” using ART: 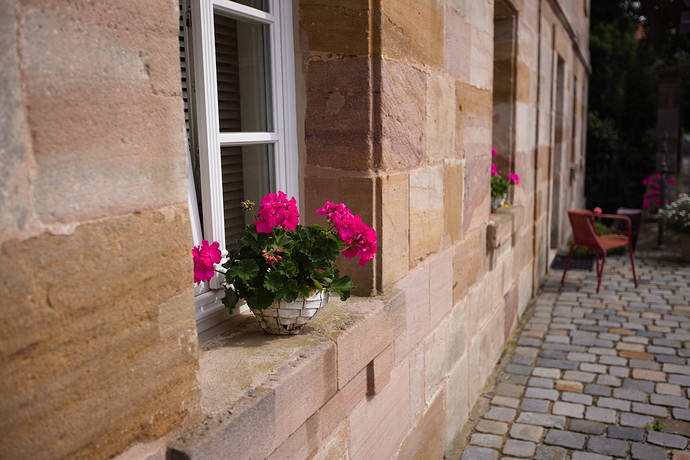 art-pic_91528192×5464 7.82 MB
So here a single click instantaneously gets me a lot closer to reality in less than a second. The flower color is still a bit off, but it’s a totally different ballpark of ‘off’.

As I said, I am shooting RAW-only since ever and am a DT user for over a decade, but obviously I fail hard at even the most basic edit.

Any help & pointers into the right direction are therefore highly appreciated!

but the effort of a skilled guy named Canon

Yes, exactly. And because he and his peers in Sony, Nikon, Olympus, etc. are skilled, their result, the OOC jpeg, looks good. Moreover, because they all work in corporations which goal is to sell more cameras and make profits, they tend to produce pleasing images, not necessarily realistic and accurate.
That’s why we all have found it difficult, initially, to produce a result “better” than theirs.
We need to learn and experiment a lot in order to “beat” them.
Especially with a RAW editor like darktable, which on purpose doesn’t give you pre-cooked look.
Other programs do, for the very same reason. But then you are just replacing Mr Canon/Nikon/Sony with Mr Adobe/Phase One/etc.

Agreed. Those companies put a lot of effort in their JPG creation. Which is yet another argument, one would like to start off with that - especially as you have paid for that JPG-generator.

Well said. I have often thought that many new to the concept of raw images simply see the raw file as a better version of the jpg because it has more data and is a larger file size so when you edit it then it should be like the jpg but just look magically better… this can certainly be true to an extent but I think what gets missed by so many is the raw data is there to create and also to correct for lighting, wb, colors in a more dynamic and controlled way than you can with an 8 bit image with a baked in look. Often you end up with something that really is not much like the jpg but its a nicer image with tones and colors that you discovered in the image that you would never see or conceive of with a punchy crunchy jpg. Then this comes down to the goal of the photo in the first place. So if you are looking to be artistic raw is the easier choice but if you are looking at it as an archivist trying to reproduce what you saw or what you saw through your camera then maybe the jpg will be a better choice or at least a better reference…

Fuji certainly makes a living off of it…

Well, for photo-documentary purposes this is exactly as I like to think about raw files - more flexible jpegs. (For studio photography I do not care about the SOOC jpg look at all.)
I guess everyone had that jpg, which was unusable (e.g. shot against the light, where everything is basically white or black). Often, in those occasions the respective raw file can be developed into an “absolutely OK” image. Heck, often I do those shots on purpose, because I know, that I can rescue that and get exactly the details I want. I just have a hard time with colors on the R5 (that wasn’t a problem with my old camera).

ART’s way of trying to match the embedded JPG at start (if you wish to do so) seems like an ingenious thing to do. I wonder whether such a functionality could be a module in DT.

I guess not, as this would then probably result in kind of a tone mapping. The best thing would be to have an auto-tuner that could translate the embedded JPG into a setting for color correction/filmic/tone EQ. Such a feature would be absolutely awesome and probably a big time saver for many.

Yet, for now I would be happy, if anyone could give me a hint on what setting I could rattle to match the colors to their real-world equivalents.

If you are interested about accuracy of color reproduction, then I guess using a color target and the color calibration module is the way.

I tried myself on the ‘color calibration module’, but if I cannot correct a violet flower to a red one, I doubt I can color match for a complete chart… That’s why I am asking here, what could be a path towards color matching my output to the SOOC JPG - hoping that I can learn to correct those off-color-defaults.

There are couple things necessary before you can start correcting violet flower to red. And color checker is something you’d have to bring with you on the shooting location and shoot for sensible scene accuracy. Color checker allows you to “shortcut” color calibration into having perfect colors immediately regardless of camera. And if you haven’t had color checker with you… then you’re in for a world of pain trying to correct colorcasts.

My guess is that ART/RT uses a different color matrix than darktable. That would mean the red/violet colors are mapped differently based on sensor values, resulting in the perceived hue shift. Could be fixed rather easily.

Alternatively, using color balance rgb and a bit of masking, I can do this: 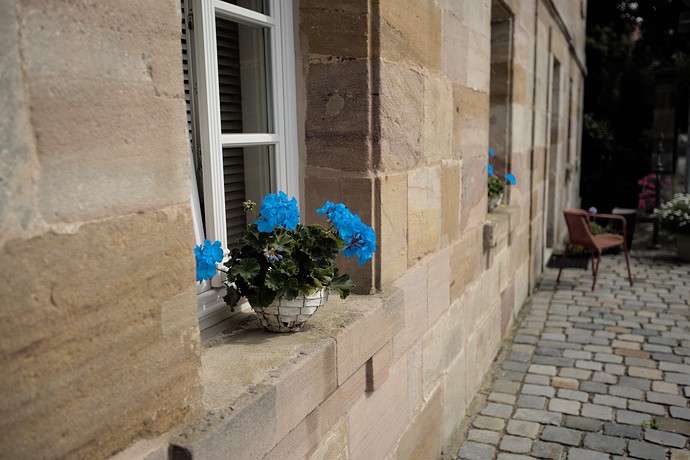 My try. Basically only used WB to adjust the colors. I think wall and flower got close, but the ground still differs a bit. 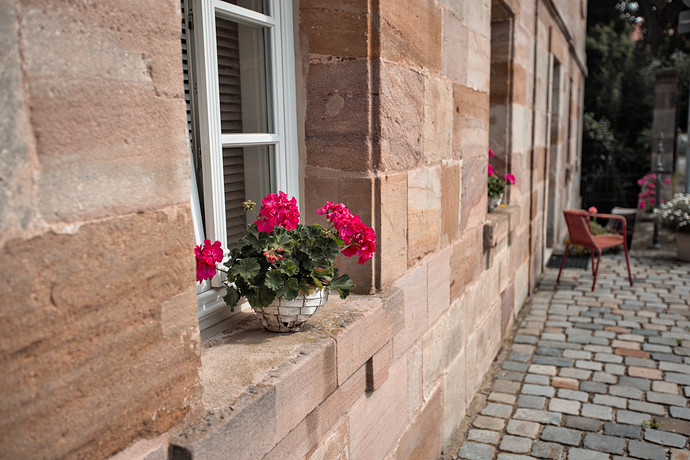 If you really wanted to go that route you have two options…Darktable chart and or you could use the DT tools to make a custom base curve. This would take you away from the scene referred workflow and back to a display referred one but maybe you would get colors that you like. I would first try the color calibration color checker functionality and if you want to experiment then you can try DT chart. You shoot an image in raw and jpg of your color checker and you use them as a pair in DT chart to make a style that uses a tone curve and an instance of the CLUT module to attempt to match your jpg. There are also tools to try and create a basecurve….

My hope was, that there is kind of a ‘universal setting’ per camera regarding how colors are represented in their respective raw files. Maybe it’s more complicated and very dependent on exposure and white balance (I mean, of course it is, but I had hoped that e.g. violet vs. red would - once fixed - not be a problem). If colors were ‘that random’, consisten results wouldn’t be possible.

Or more in plain English: I would hope to be able to create as correction, were different lighting situations could be fixed by a simple hue shift / white balance change, but were relative distances of specific colors would remain constant.

Otherwise one would always have to check the SOOC JPG to make sure, not to be too much off color - but the last 10 years I did not need to (using the 5D series). The initial raw setup might have been to flat/dark/etc, but was not off color-wise. So obviously this is a little different with the R5, but I would hope, that this ‘offness’ is constant and could be fixed once and for all with ‘one magic setting’.

So more in the realms of: One time finding a setting using a color chart, but then all colors (under different lighting situations) are ‘off by the same amount’.
(Of course, having a ‘weird’ lighting (e.g. pure blue light) could break that, but under that lighting, you would also perceive the colors differently - without green light, there won’t be any reflected green light - except if you photograph phosphors ;)).

Thank you for your version! This is indeed pretty close. I will have to have a close look, what you did differently. The most obvious is, that you did not use the ‘color calibration’ module at all.

I tried darktable-chart (mentioned it a couple of posts ago). The result only really worked on the image I created the chart with. Another image of that chart (same lighting, slightly different angled) was color-wise completely off using the created .dstyle.

But I will definitively try the color chart calibration method - I completely forgot that this existed… Thanks!

(to darktable-chart’s defense: I ‘just shot’ that chart - so I did not put anywhere near the effort in, to get a correct chart shot (as in: no stray light, perfectly noon, … So this might have been the reason for it not working that good - it was just a ‘quick test’)

Are you on linux?? There is a script that does a blended icc profile from a raw jpg pair…I have found the results to be not bad…GitHub - pmjdebruijn/colormatch: ColorMatch

It could just be that the input profile is not a good fit. Here the color calibration with the color checker should help but only for that lighting and maybe in general if it is a daylight one. You could also try to render you images perpetually vs relative and see if one of the mappings give you a closer result in you output files??