Color-matching pictures in a series

I would like to introduce an experimental feature I’m working on : color-matching pictures.

It comes from the fact that, even with top-notch color science and using pictures shot in seemingly similar conditions, light may change during a shooting session. As a result, it may prove difficult to obtain a consistent look across pictures, because copy-pasting the history will yield slightly different results. When you have a secondary color-grading (set in color balance RGB or RGB curves), you don’t really to want fine-tune it on a per-image basis, because that will take forever. Instead, you want to adjust the illuminant and the exposure, that is chromaticity and brightness, because in theory, that will normalize all pictures to the same ground through (taking light variations into account), which in theory, should help color balance RGB to produce the same effect.

Notice, though, that “same effect” ≠ same look, because human vision is sensible to contrast and to surround, so ensuring the the same output colors is not enough to ensure the same overall perception (if, for example, one pic has 1/3 of bright sky and 2/3 of dark ground, and another has the opposite, the change in background will affect the perception of the subject in the foreground).

In any case, I recorded a video to show how to use it, and the code is on Github and working: 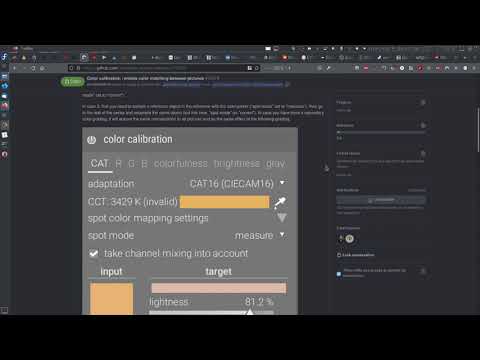 When shooting the same subject over some period of time, it happens that the lig…hting conditions may slightly change, and so will the colors. So far, the only way to compensate for that is by using a grey card and doing a spot WB on it. Unfortunately, we can't reshoot a greey card every time a cloud passes by the sun. So this usually ends in never-ending fine-tuning This feature allows to compute the white balance on any arbitrary color known a priori, not just grey. It may be used in 2 different cases: 1. you know beforehand the expected color coordinates (in Lch space) of some surface, 2. you have done one reference edit and can sample one reference color in it to propagate the look on the rest of the series. In case 1, directly input the Lch coordinates of your surface and use the color picker as usual on the corresponding color ("spot mode" set to "correct"). In case 2, first you need to sample a reference object in the reference with the color-picker ("spot mode" set to "measure"), then go to the rest of the series and resample the same object (but this time, "spot mode" on "correct"). In case you have done a secondary color-grading, it will ensure the same normalization to all pictures and so the same effect of the following grading. ![Screenshot_20211207_150411](https://user-images.githubusercontent.com/2779157/145043385-3d95e6b0-f259-4a9c-85ab-8680dc2adfcc.png) ## Limitations This only works at the CAT (white-balancing) level and only affects the illuminant settings. ~~If you have some channel mixing after, it will not be taken into account, which is not a problem if you process pictures in batch (with similar profiling). However, if you expect some arbitrary color coordinates **after** the whole calibration (including some profiling saved as channel mixer) or if you had to use different profiles, you may color-match in a following instance where no mixing is done (that gives you one profiling + base WB instance, and one color-matching instance).~~ **EDIT** : You can now optionally set the target color taking into account the channel mixing/profile, so you only need one instance. This will always force a custom illuminant because the daylight and black body approximation don't allow a good-enough color matching. Notice that to get exact color matching, brightness/luminance/exposure also needs to be taken into account, which will be dealt with in another PR. This only deals with chromaticity.

This is the companion of #10579 for lightness mapping. It works exactly the same…, but at the exposure module level. TL; DR : you can choose to remap any region of the picture to an arbitrary lightness. Also, this removes the previous color-picker auto-tune that was based on min/max RGB detection, suitable only for display-referred workflow and aiming at avoiding clipping in this context. ![Screenshot_20211207_113046](https://user-images.githubusercontent.com/2779157/145012878-3bf4e933-e90e-492a-a258-41531ce342fb.png)

This also enables to match skin tones to an arbitrary hue, an use case I don’t endorse, but you take responsibility for the social consequences of your actions.

This being WIP: I was wondering if you could make the selected area sticky/remembered. At the moment you’ll have to manually select the area 4 times and I think this might be a problem when you want to be precise (that is what this enhancement is all about, right?).

Not being a developer I’m not sure how hard this will be to implement but I do think this would (greatly?) benefit the overall precision of this feature and its handling.

Very interesting. I noted with interest the remark about colorblind people. The tool could also be useful for timelapses whose lighting remain stable.

The problem is the ratio of the image may change and the subject will move between shots, so remembering the area will be useless in most cases, it needs to be adapted to follow the subject.

Yeah, of course. Kinda obvious… You might not even have the same cheek(bone) to match against in another one of the same series.

Have you given any thought to the use case of color-matching images of the same scene from different cameras? I think the current LUT-based schemes used by Davinci Resolve and others is to use a reference camera to pull the others into “compliance”, so to speak…

In any case, LUTs are nasty.

Y’know, sometimes the simple thing is not so obvious. At least in the head of ggbutcher…

Hi @anon41087856. I am so looking forward to this new feature. It will revolutionise how my workflow works for so many images. Especially when I am scanning negatives from days gone by and struggle to get pleasing colors. I hope it will be possible to save the target colors as presets for future use. It may be that we want to match a color, which could even be skin tone (I know that makes you cringe) to use as a starting point. There are just so many uses for this improvement. Keep up the good work. BTW, I have to scan lots of negative film and Epson, Vuescan, and Silverfast do such a poor job with color negatives, so I am hoping this concept could be combined into negadoctor to help with scans.