Worked and I got a .cube file, but I also got an error message at the end.

Thanks, that should be fixed now, along with some small improvements regarding color calibration!

From my other computer. Around 200 pair of pictures. Too many? Or just not all things installed? 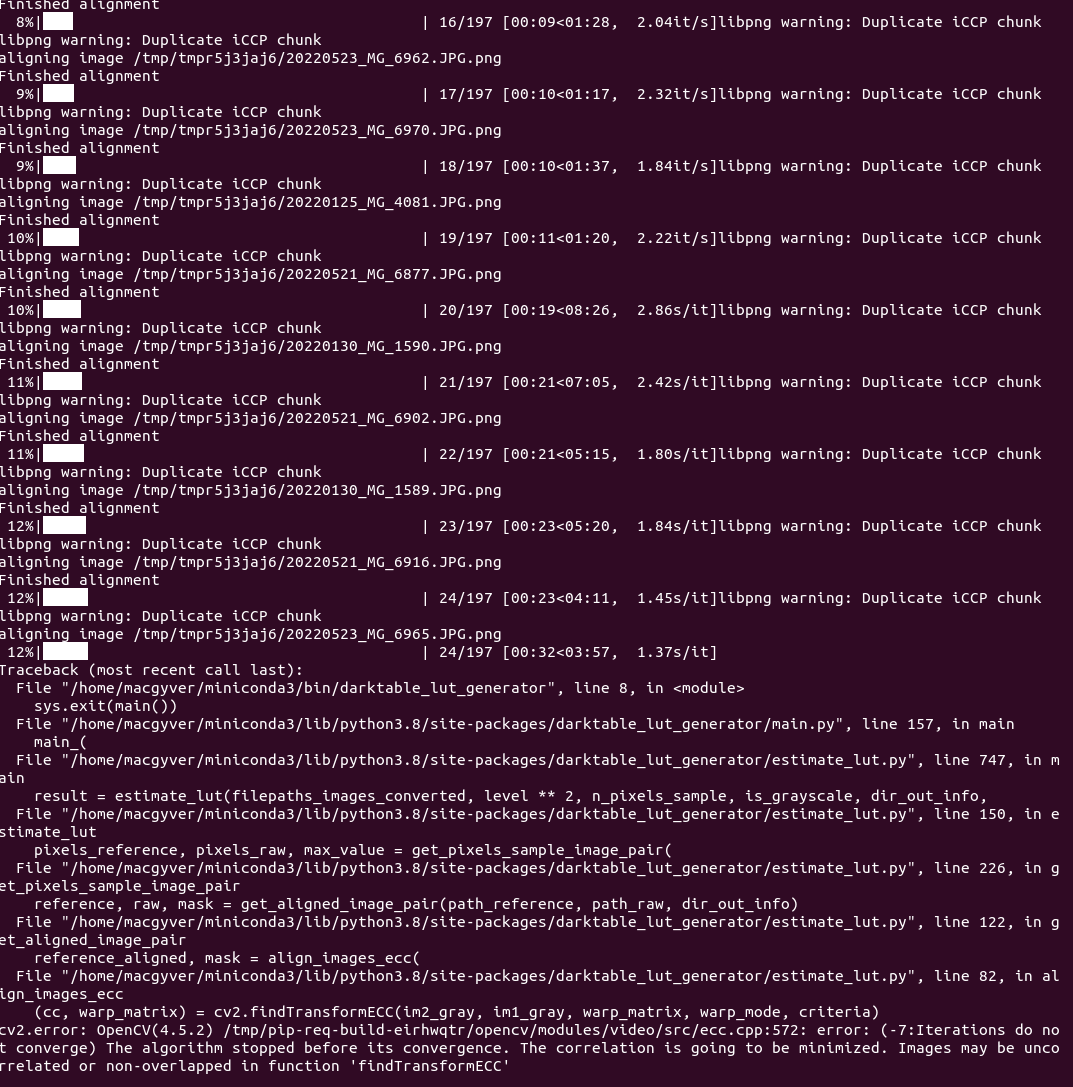 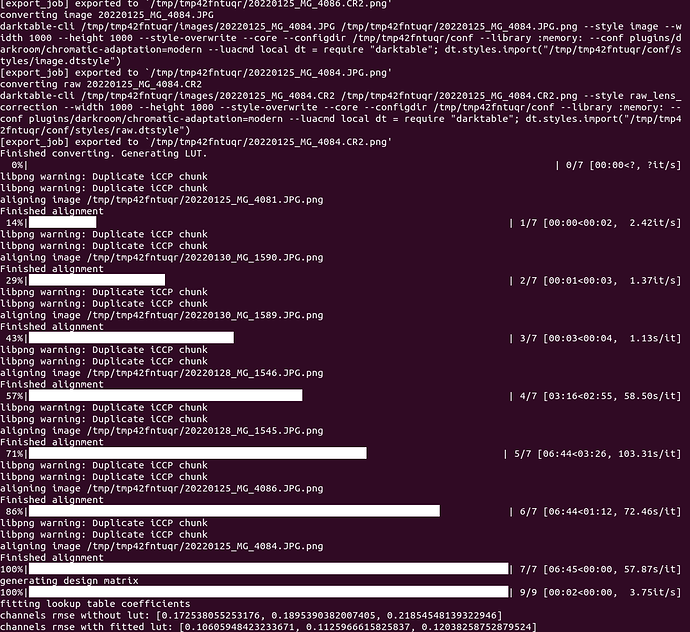 Hmm, it seems that the alignment of raw and jpeg for MG_6965 did not work.
It could be that the image is too dark or too flat.
The currently used alignment algorithm is very precise, but works on grayscale versions of the images. That could be a limitation, too.

Rather flat, indeed. Seems I should take some new photos of flowers instead.

Could you provide the image pair where alignment failed? I’d like to try whether the alignment can be tuned in this regard

Sure. It was just a picture of the blue sky. I will take some decent pictures of flowers now instead. 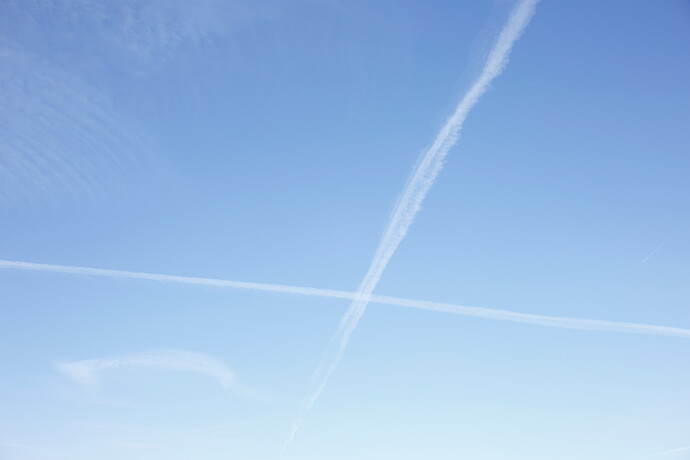 Okay, so it is certainly a good point to make alignment optional in the script.
I’ll check on that when I have time; could you also provide some image pairs where the problems occoured?

I’m afraid I’ll go on vacation very soon and probably won’t have time to find the offending pictures. Strangely, they didn’t consistently send the alignment optimizer into an infinite loop. Only sometimes.

Edit: Nevermind, I read --help and turned it off.

The photos I took today. Feel free to try. I didn’t get any decent result from them. Maybe less is more and I should just try the color checker with different exposures?

Transfer and send large files for free with Sprend. Sensitive files can be encrypted and sent with Sprend. Transfer your files easily, quickly and safely!

Interesting, I’ll look into it when the download is finished!

Okay, I’ve taken a look at the dataset:
Alignment works significantly better with the new version, but still struggles in some cases:
In particular, the images of the spectrum projected on a wooden surface are problematic.
The reason is that the utilized method performs direct alignment by optimizing the transformation parameters so that a specific measure of pixel-wise similarity between the images is maximized.
Compared with feature based methods, this one has the advantage of being very precise on a (sub-) pixel level and of also working with very smooth images that don’t have detectable features.

However, it is more sensitive than feature methods to differences in gradiation and exposure between both images.
Here, the difference in rendition between the exported raw and ooc image can lead to problems.
When trying different approaches out, I found that the currently used algorithm performs best for most images, but there is always a trade-off.
Of course, it is possible to get the alignment working for almost all images, but this would require much effort in algorithm selection and tuning, so that I consider this out of scope for this little project

Edit: But yes, the lut generated with your dataset is inaccurate…
The problem seems to originate from the raw image export from darktable: If I open the raw image in darktable and apply the style manually, everything is fine. But the export from command line has strange white balance…

So, I have no idea what’s going on.
I’m now just experimenting with the image pair _MG_7210.CR2 from peter’s set.
The script develops the raw with darktable-cli from command line.
However, although the same color science settings and scene-referred default pipeline is configured,
the image exported from the shell command sometimes/often differs from the output with the same style applied manually and sometimes even differs from the image shown in darktable with the style applied if darktable is invoked with the args of the shell command after --core, so that config dir and hence configuration should be identical.
Everyone who wants to experiment with this, too, is welcome…

If I try the generated LUT out on the developed raw image from the shell command, the result is visually identical to the OOC jpeg. So in principle, everything works fine except the flawed darktable export.

Would xmp that you used before work better than with style?

Okay, got it now by not using styles or xmp, but have none configured for the standard pixel pipeline.
User supplied styles via the corresponding argument may still run into issues with the darktable export, though…
New version is released.

For your dataset, alignment is definitely important for getting the gradiation right, as small mismatched features in the outer image regions have some impact. I excluded the images of the spectrum projection where the alignment struggled and obtained pretty good results!

The following arguments were used:

I’ve played around a bit more. Alignment is much more robust with the recently released version and default parameters should already yield quite good results.

I am a darktable user and I wanted to use the original profile of my camera, so thank you for making a great tool.

I tried to use it right away, but I could not get it to work because of an error. I am not familiar with the program.

I would appreciate it if you could tell me how to get rid of the error and make it work. 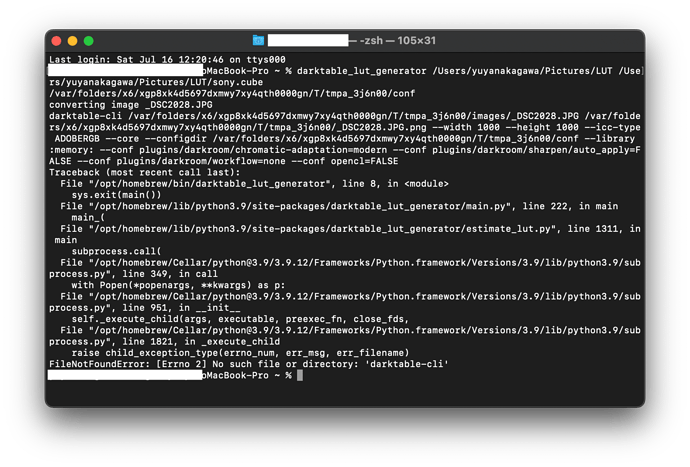 Hi!
Seems that darktable-cli (the command line version of darktable is not in your path.
I guess you’ll get a similar error when just typing darktable-cli in the terminal?
To be honest, I don’t know how to install darktable-cli on MacOS; is it bundled wit darktable like on linux?
If you know where the darktable-cli executable is located, you can pass the location with the according argument (see --help) to darktable lut creator.