I’ve just wasted the best part of 4 hours retaking flat frames of various ADU ranges from 4000 to 20000 for the Oiii filter in my 294m and scope combo without success. Everything either overcorrected or undercorrects. Numerous previous occasions beforehand, too.

The closest ADU value seems to be 6000, but my calibrated images still look awful. No issues whatsoever calibrating Ha (16000 mean ADU), but always Oiii and to a much lesser extent, S2.

I’m now at the point where my time would be better spent simply applying a pixel math solution to my masterflat, but it’s completely alien language to me and the internet is if no use for elaborating either.

Can someone please point me to a simple equation to apply, as I can make no sense of this, and don’t know where to start.

Simply saying “add 0.5 to the flat” or similar advice means nothing to me without further explanation. I need a written example, please.

Hi Mark, do you calibrate flats by subtracting an offset? Otherwise indeed the master flat will not correct light frames as expected.
A few reads for you on this subject: Siril - Synthetic biases and Siril - Enough with dark flats

I use dark flats (plus matched darks) as I’ve said it works fine for Ha, luminance and l-enhance filters with my mono 294. I’m not sure why Oiii would be any different to Ha calibration workflow? I subtract the offset when I use my colour DSLR cameras.

I have read the two articles you quoted previously, but they are beyond my understanding and I have no idea how to implement them. Sorry but I need a clearer, step-by-step guide for my particular use case to make any sense of it.

Ok, I have just watched an online Pixinsight tutorial and after about half an hour, we finally get to:

Where £T is the file (masterflat) you are working with.

So the above to the master flat will deal with under or overcorrection in Siril pixel math? Obviously, changing the numerical value to suit.

I use dark flats

Maybe you could be interrested in Siril - Enough with dark flats

OK, as mentioned previously, I can’t make any sense of the link posted, but I have looked at: 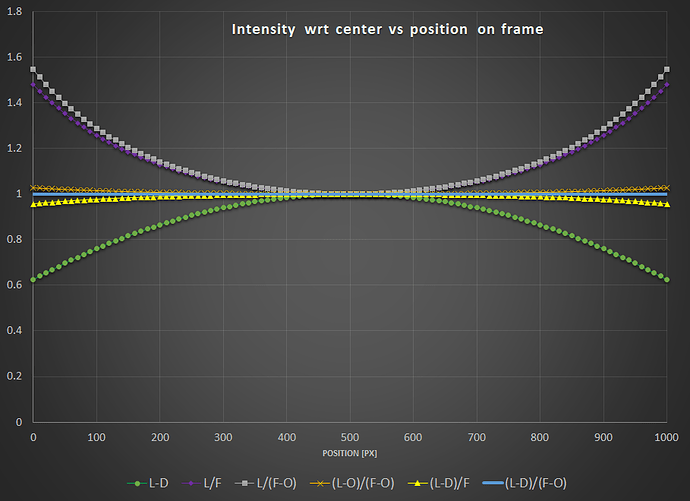 In this tutorial, dedicated to versions of Siril at least equal to version 0.99.10, we will see how to use synthetic offsets to calibrate flats and how to determine their level. I will use the terms bias or offset indifferently in this tutorial. Why...

Using the above methodology for my camera (QHY294M), I have got: 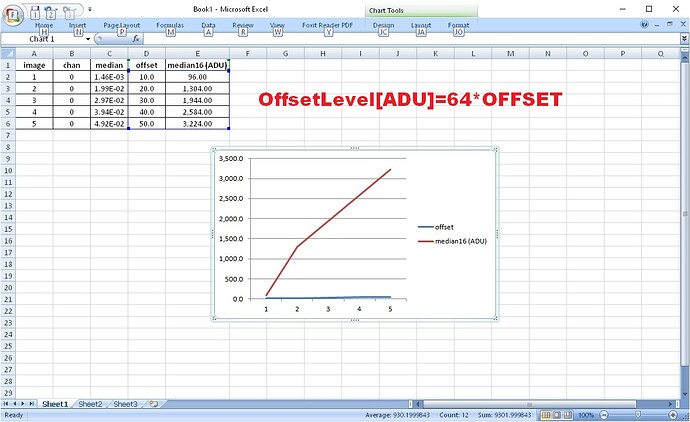 The offset 10 value seems non-linear or spurious, so I have ignored it and obtained an average value of 64.77 from offset 20 to 50 (near enough to 64) to enter as the offset level, instead of bias/darkflats. I usually image at 60 offset but is it safe to assume the same value will apply, as I didn’t test it?

Would I have to re-calculate the offset level if say I chose to image at a different gain?

Would I have to re-calculate the offset level if say I chose to image at a different gain?

Offset level shouldn’t change with gain. So you can use the formula 64*$offset for whatever gain.

Some questions that come to mind:

Well, I’ve re-preprocessed my files with the * =64*$OFFSET command in lieu of bias/darkflats and get nothing but a sequence of black images in all Siril vizualisions (apart from Autostretch which shows a black image with very few stars).

It seems this clearly wasn’t the fix for the original issue and has created another one, so back to the drawing board.

I have tried to fix with pixel math pedestal value from .1 to 199 with no avail. I will try to make sense of the appendix you refer to again, but don’t hold your breath.

Hi Mark, it’s getting complicated, could you share your master dark, a flat image, a light image and the master offset please? If you need a location to upload them, I can give you a link in private.
Thanks

Just a heads-up: Of late, I’ve also been having flats problems with my ASI294MC Pro and an L-eXtreme filter. In particular, the red channel is really funky looking. I’ve been even debating if it is the fault of the camera. I’ll be following this thread closely, and follow up with some master flat data as things warrant. I suspect that others may be having a similar problem. (End of babble).

There is indeed something with the 294 sensor, which is seen both on zwo implementation but also QHY, and both on the mono and the color version. There is a strong non-linearity past 1s that only vanishes at 5s or so, see for instance section 3.6 of this: ASI294MM
My personal recipe is to make flats just below 1s, usually .8 or .9s. There will be different advices out there but I know at least it works for me.
Now regarding the 294MC+L-extreme (that’s a combination I use regularly), the red channel indeed looks funky in Histogram view: 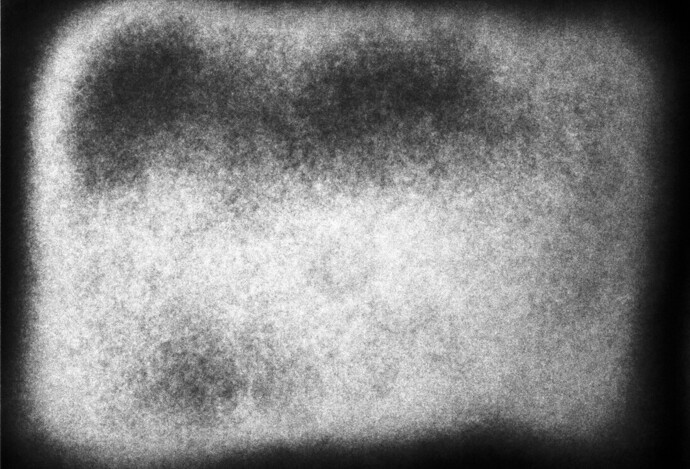 image1097×747 285 KB
And there is indeed something if we look at the levels on the borders of the field: 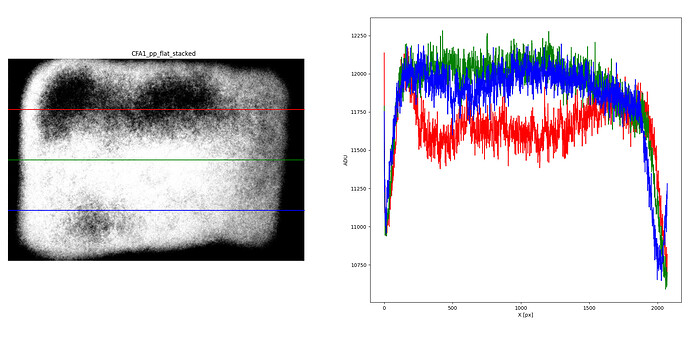 image1918×980 370 KB
However, they do correct my lights (provided I’ve kept away from shooting said flats above 1s).
We also see that in the green CFA channels (same for blue), the pattern looks much more like what is to be expected, lest the fact that I still have a tilt problem to solve: 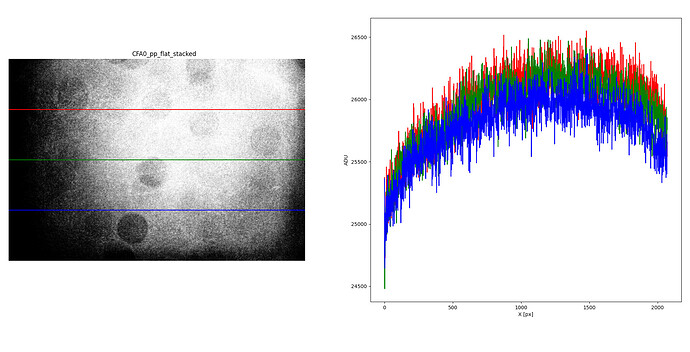 Just sharing my experience here in case it helps you find a way to adapt your imaging process,

My flats basically look like this, and don’t calibrate out. 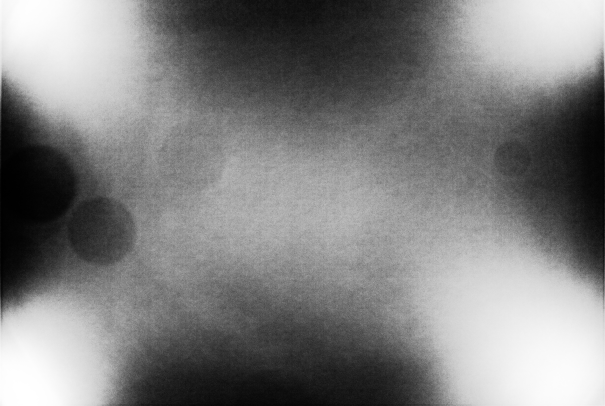 I am in the process of repositioning my filter, to see if that has any effect.

I will take a look soon to the files, but this doesn’t look like a flat frame at all. How are you doing them?

I have generated flats with both a custom made lightbox and an EL flats panel.

That particular flat was from the EL panel.

Thanks for sharing some images. I think this is a problem with the optics.

The dark and dark-flat images look good, but the flat and the light image show this unconventional cross pattern. Maybe there are reflections that should not exist, maybe light leaks through connectors or something, because having an excess of light in the corner, although not huge, is inconsistent with the fact that the sides are darker.

As I said earlier, I’ve repositioned the filter with the hope of remedying this issue. It does seem to tie in with the idea of some sort of internal reflection of some sort.

Not had chance to shoot any test flats yet, but when I do, I’ll report back.