Putting aside the issue of the raw files not yet supported in darktable, does anybody have the “old” EOS RP, i.e. the first cheap, full-frame mirrorless from Canon (I think it came out in 2019?). Any real-world story and opinion would be appreciated. I would probably get the body with the RF 50mm 1.8 first, then one of the “cheap”, dark zooms like the 24-105mm zoom perhaps.

Oh, and the “vs Fuji” in the subj, well it’s because I’m trying to get rid of my Fuji XT2, I’m fed up with it – so many little things that don’t work well, in general this camera hasn’t aged well… probably spoiled by the Nikons, even the consumer D7000 was more robust than this Fuji (and the X-Pro 1 before that as well).

I’ll answer myself here, just in case anybody is interested (but I do have history of writing posts that nobody’s ever gonna read → e.g. my obscure blog hidden in an amazon s3 server somewhere that even I can’t remember the full address …)

I did buy the EOS RP in the end and I couldn’t be happier. I had a shitty deal selling the Fuji with the three lenses I had (not a shrewd businessman here) but alright then, I’m happy now with this second hand RP (bought for €790) and the RF50mm 1.8 (new for €230).

Anyway, the first impression is really good; the sensor may be “old” but it’s excellent in all terms – as perhaps all the sensor made in the last few years; I never had any issue with the D600 sensor for example, and I certainly didn’t experience a massive jump in terms of quality when I replaced it with the D810. The low dynamic range that all reviewers were stressing? I don’t know what’s the problem really – perhaps they should start metering with more care?

[…] I’m using ART and I’m seeing wonderful colors and excellent quality with minimal processing […] my original plan was to get the 24-230mm knowing full well about distortion and generally ‘poor’ quality of this ultrazoom – but also knowing that to me, the camera-lens combination is a tool to “get the shot”; if I need top quality I will then use my D810 with better lenses. However after having shot a few times with the RP I’m really surprised by the results so I’m now questioning my original idea and consider getting instead the better 24-105 f/4 to have a bit more reach and flexibility.

Please do elaborate on the differences between the cameras as you see them; and particularly how their files differ in post processing.

Superficial differences of the camera bodies are always easy to find everywhere, but honest long term experiences are rare, and highly appreciated in my book.

And I would be particularly interested in exemplary raw files of the things these cameras you have are good at and bad at, if you’d like to share.

hello Bastian, well if you’re interested I’ll post later a few more thoughts and I will also look for a file to post in the play raw section that sums up what I’m enjoying so far.

The EOS RP feels solid and well built. That will need to be tested in the long run obviously, and I can’t really avoid mentioning that I had the same feeling when first had in my hands the Fuji X-Pro1 first, and the XT2 later.

I’d probably need to mention the reasons why I felt the build quality of the Fujis wasn’t very good, which was the main reason to look for an alternative:

So you see, when reviewers complain about no weather sealing, plasticky build, economical and utilitarian look of the EOS RP I really don’t trust them at all, since I’ve also seen the same kind of people praising the Fuji for being tough little “pro” cameras… Given my past experience with Nikon, I hope that Canon builds its cameras in a similar way; they may not be flashy and good looking but they are reliable workhorse: even the way this RP handles makes me happy, you hold the small grip and you just know it won’t slip (can’t say the same for the Fuji bodies).

Until I knew that a cheap 50mm was on its way however, I didn’t consider the RP at all. I was however captivated by the lenses that Canon was releasing; a 600mm with fixed aperture for just €700? a tiny 70-200 f4 with similar dimensions and weight as my Nikon 24-120? On the other hand, Nikon Z had a lot of quality primes, which are the lenses that I tend to gravitate to because of size, dimensions and price. Plus, I already have lots of Nikon lenses…
Then the RF50mm f/1.8 came out, I realized I could’ve bought it for much less money than the equivalent Nikon Z lens, and most importantly – Z6 bodies are still above the €1k mark while the EOS RP looks like nobody wants it → plenty of used bodies available that could be had for very little money.

Anyway, I got the camera about 2 weeks ago, spent a little time working my way through the menus and the really enormous customization options and settled on a few settings that allow me to operate this camera real quick; one button to switch from af-s to af-c (ops, that’s nikon jargon; in Canonland “we” say one-shot AF to servo-AF), the lens ring to change ISO, main dial for aperture, back ring for exposure compensation (I normally use Aperture priority); the other couple of small buttons to the front (m-fn) and the back allow me to change metering mode and single vs continuous shooting. I mean, it’s a bit cumbersome compared to how easy it is to change things on a Nikon D810 for example, or the straightforward, old-school way that the Fuji XT2 is operated, with physical dials, all clearly labeled – that’s the main thing I truly miss from the XT2.

A small lcd would be better on the EOS RP, just to know what are the current settings without having to look at the EVF or LCD.

The rear LCD: again, the tilty mechanism of the XT2 is in theory better for me as I don’t do vlogging or selfies or other absurdities, but what I do appreciate of the flippy screen is that I can turn it back on itself and protect it when I stuff the camera in the backpack close to ski poles, skins, and other random things. Also, I feel like it’s very quick to flip it out and use it for low-level shooting etc, while the tilty lcd of the XT2 had some sort of locking mech or it was simply harder to move it around so I never used it much.

I will not comment on AF yet because I haven’t had time to test it properly; I have the impression is faster and more positive than the XT2 but that is to be expected given that the RP is much newer. Face and eye-lock, I’m not sure, I tend to use single/spot AF and follow the subject; it is surprisingly effective to move the AF point by sliding the thumb on the rear screen, I think it is genius – I don’t know how much I’ll use it though given my preference to have the screen flipped back on itself (see above). I’ve recently listened to a bird photographer on the B&H podcast, he said that the eye-focusing with the new EOS R5 is truly amazing and almost “magical”; I’m not sure if the RP is up to this level but it is surely better than the XT2.

Here’s a final thought about the camera, once again trying to contradict what everybody else says – that this is not an “action” camera. It probably depends on what do you actually mean for action camera; no, it does not do 20fps, and the AF may be slow. But I need a camera that I can take it with me when I do action sports… snowboarding, mountain biking, motorbiking, hiking etc… and I need to have the smallest camera that I can, and a small 50mm lens is perhaps all that I need to document things from the inside. Consider these two photos (both taken with other cameras, but it is just to make a point), the first shot with a 28mm-equivalent, the second with a 50m. This is what I need the EOS RP for: 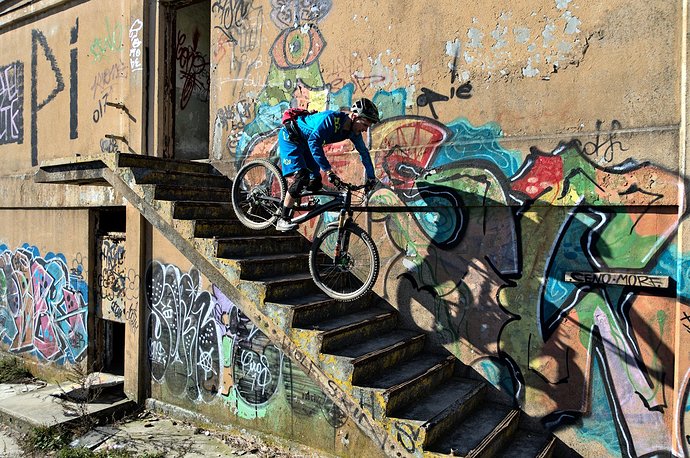 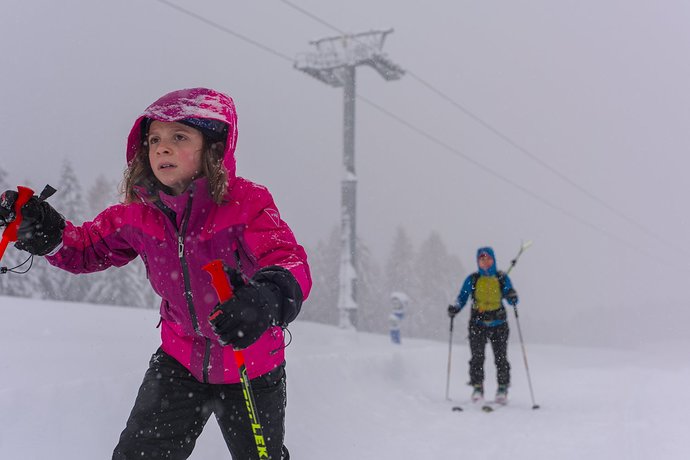 Obviously you need a 200mm lens to do this instead: 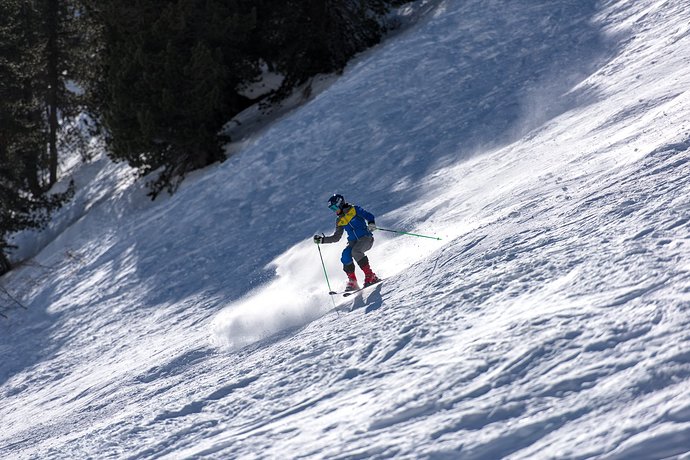 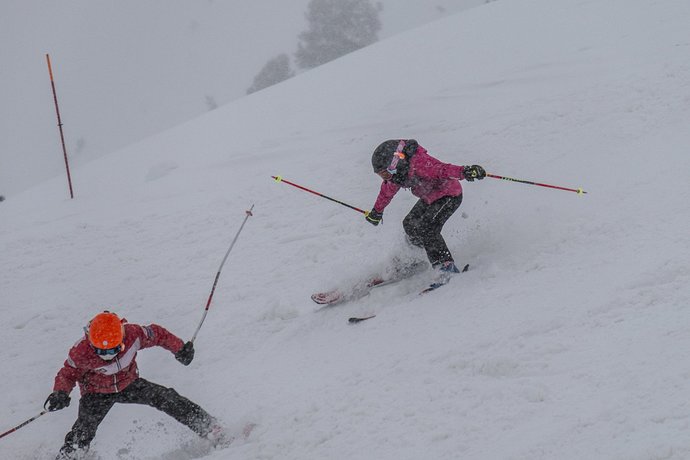 …so that’s why I’m on the fence about getting something longer for the RP – I’m pretty sure that the 4fps won’t stop me from getting similar pictures. For now however, 50mm rulez!

I will post a few files as play raws; I still hesitate in making 1:1 comparison with the fuji files as I’m using ART to process these Canon raws but I use darktable for everything else.

I read the post rather quickly, so I may have missed it. Any reason why you went for a Canon instead of a Nikon, given your history with Nikon?

Thank you! Such real world accounts are truly invaluable. As you say, most professional reviewers just don’t have a user’s perspective, and mostly talk about things I don’t care about.

My own X-T2 is still chugging along nicely, and doesn’t currently need replacement. But what with 35 cameras becoming ever more affordable and compact, I have been theorizing about them, for the future some day.

As Carmelo @CarVac said, price of the body was the main reason.

Corollary reasons was wanting to try Canon after so many years of Nikons, the availability of just the right lens for me (a 50mm small and inexpensive), and also the presence in the RF lens lineup of exotic but reasonably priced lenses like the 600mm f11 (which probably I will never buy, but just knowing it’s there makes me happy).

lenses that perhaps I will ne

I think the weight is approx. similar but the RP feels bigger in your hands due to the large grip compared to the compact and streamlined Fuji body. However, this is compensated by how easy it is to handle the camera esp. in awkward conditions like today (very cold, on the snow, etc) – you just feel condident it won’t slip out of your hands.