(Warning: this post is mainly intended for script writers, it talks about technical stuffs about G’MIC-scripting).

I’d want to share some news about the evolution of the G’MIC scripting language here, with the apparition of two new native commands: store and restore (native means they are hardcoded in the G’MIC interpreter, so they will be available only in the next release 2.7.2 of G’MIC).

This addition comes from a thought I had after reading the question from @Reptorian on copying images in variables. These new native commands are basically a faster implementation of the img2var and var2img commands I’ve just introduced in the stdlib yesterday, as an aswer to @Reptorian’s request.

Let me quickly describe how these new commands works:

Command store[selection] takes a selection of the images in the current list, and transfer them to a binary-encoded variable (transfer meaning that after the call to store, the images are not present in the list anymore. But of course, to keep them available, you can use +store instead).

Command restore does almost the opposite : it inputs the content of such a image-based variable at the end of the image list (but it does not reset the variable content, so it’s more like getting a copy of the images stored in the variable).

The good thing is that this pair of commands relies on the same variable mechanism we had before in G’MIC, meaning the same rules apply for these image-valued variables (e.g., such variables are still local to a command, unless the variable names start with an underscore).
For instance, you can do things like:

So, as you see, store and restore are just helpers to assign/access image-based content to a variable (from now, only text strings were supported for assigning variable values).

Why do we need that in G’MIC ?

The example above is not really complicated, but still, you see it requires you carefully manage the image list, as you have inserted an additional ‘argument’ image in the list.

Now, with store and restore, a similar command can be written as:

This doesn’t make a difference in the number of lines to write, but believe me, the second version is really easier to write !

There are still work to be done on this. Even if most of it is already functional, some things are not working as expected (in particular, the copy operator between variables arg_img2=$arg_img1 does not work right now, and it will be a bit tricky to implement. But I’ll try to do it !

I have been slowly developing experimental filters with multiple components. It is really hard to keep track of all of the sub-images. Being able to store them not only makes the code more accessible but it would probably reduce the amount of time lost to keeping track of which images I removed, which ones I kept and which ones I renamed. And finally, which ones I may need at the end of an extremely long multi-command filter. Just talking about it is laborious!

I hope the performance hit isn’t too much for these native commands.

I’ve worked a bit this week end and today, to improve the new commands store and restore.
Here is the current help they display:

In a few minutes, the pre-release version 2.7.2 will be updated with new binary packages on the G’MIC website. Let me know if you have the occasion to test this new feature!

Just a thought: wondering if it would be good to use store and restore. Although in English it means “to bring back” or “recover”, it could be confusing for nonnative speakers for store to be in both command names. Could be taken as “re-store”, as in “store again”. Since I used the word recover, maybe that could the name… or maybe retrieve. Thoughts?

I like the idea of having similar names for both commands, as both commands clearly work together. As a non-english speaker, I think it really helps remembering their names.

As a native spanish speaker, I have to say that I prefer reserve - recover.

But, store and restore is easier to remember as all you need to remember is store, and only add re to do something else.

Well, what I see from the Merriam-Webster dictionnary is :

store has indeed the meaning of moving something in another place (so here, an image, from the image list to a variable), and restore brings the image back.

No problem. Just adding to the discussion.

Just for info : Today, I’ve implemented the store and restore commands, as custom commands in the stdlib.
As a result, scripts using these commands (introduced natively in 2.7.2) should work also with previous versions 2.7.0 and 2.7.1 of G’MIC (they will just be a little slower though).

So, do not hesitate to use store and restore commands in your scripts already !

Have I hit a limit? This works

but when I input a larger image such as heal_mushrooms.jpg, I hit a wall

Yes, that’s one difference with the ‘native’ versions of the commands.
Your example works with 2.7.2_pre currently.

@David_Tschumperle I figured it out, and changes work on my tiled form filter. If you’d like, you can remove the arg2var and var2img.

Yes, that’s it.
Native versions of store and restore are basically there is you are using G’MIC 2.7.2.
Before that version, the limited custom versions of these commands applies.

Oh, I think I know what you are saying: native overrides stdlib. Since I haven’t updated core yet, I am using stdlib's.

Oh, I think I know what you are saying: native overrides stdlib . Since I haven’t updated core yet, I am using stdlib 's.

You could check https://gmic.eu/files/prerelease/, where a Windows build of G’MIC 2.7.2 is available for testing.

After thinking about it, it would be interesting to use store and restore command to replicate this - 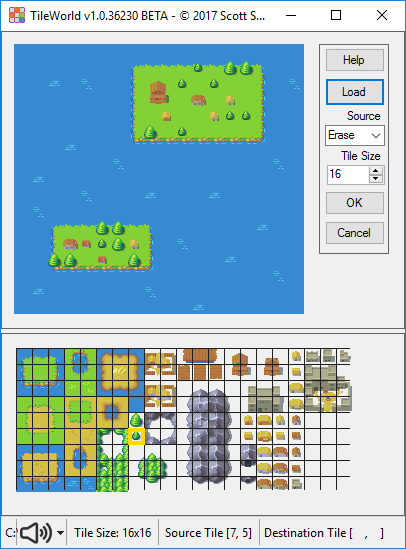 Is it feasible? Right now, all I can think of is a gui filter that uses text input. Rather tiring to do it manually.

I just have one issue with store and restore. I really don’t want to see this in preview when using code[local]. The command is basically for reverse engineering gradient map. 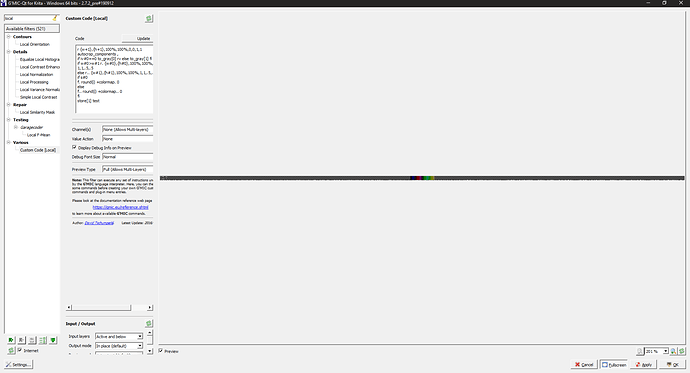 Oh no. I do think this has to do with store.

All I did was apply rep_form_pixel to 4096 (Squared) Nebulous Image.

Worked a second time, I don’t know what happened.

Looks like he has found the same limitation as you did with the custom versions of store and restore.
@Reptorian, are you running latest version 2.7.2 of the plug-in ?