3.0 How to get good results automatically?

Oh. I , seem to have misunderstood how more modules works. It seems to display only by module group, and jumps to the basic group. Very odd behaviour IMHO.

As I said, it’s in progress. What you have now is a machine translation with some parts manually verified and corrected.

How about a practical exercise to clarify things?

The photo in question was shot under very, very bad conditions and requires a lot of work. To keep it simple no attempt has been made to reduce noise.

Which is best and why and can anyone do better? 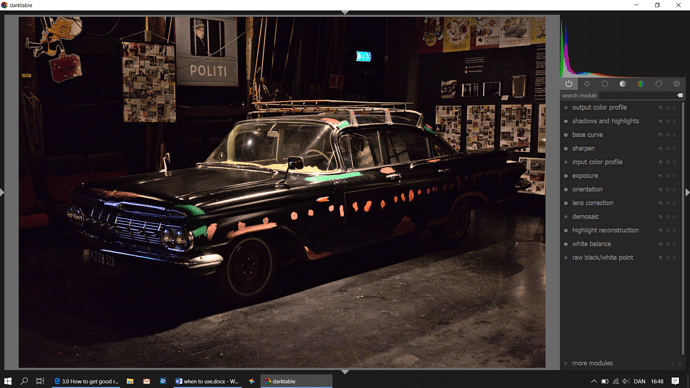 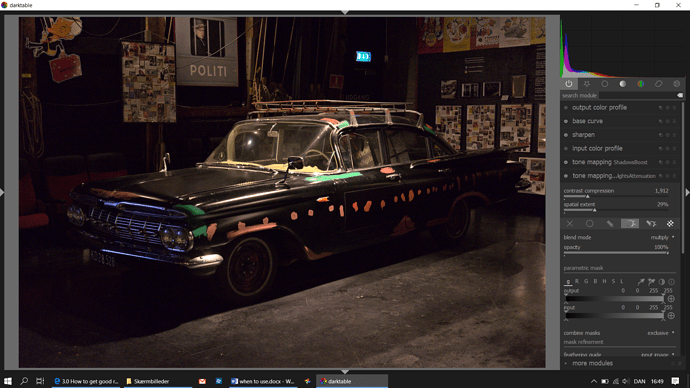 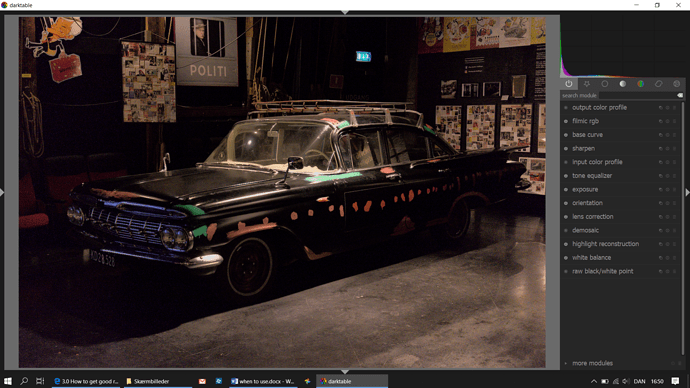 here is my quick try … 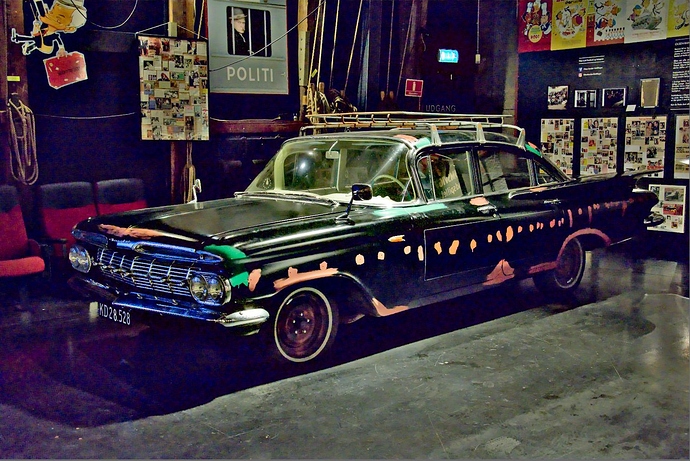 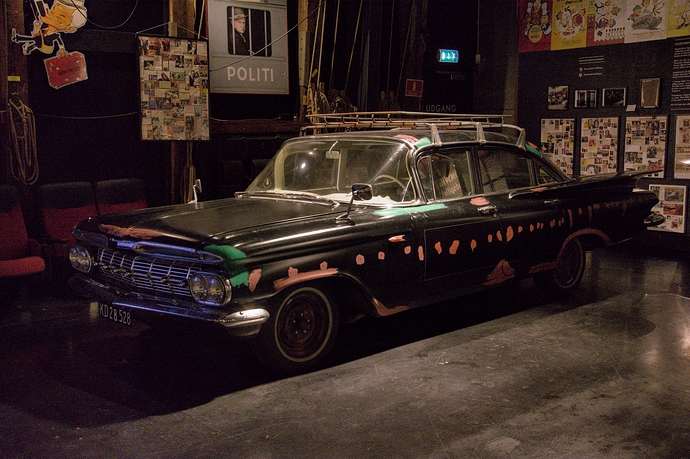 How do you download it so as to translate with DeepL?

Copy and paste piece by piece. I copied a small part from the blog, had it translated and read it. And then the next piece. 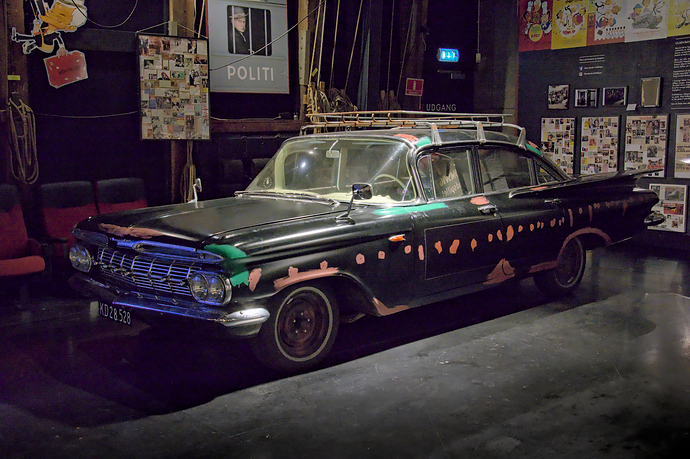 But, again, to reiterate, I’m only looking for a reasonable ‘starting point’, not an automated final image

You’ve said this several times, yes, but you’ve failed to tell us what you’ve tried, what is lacking, and where you feel you’re failing. There have been several suggestions here about paths to take. Have you tried them?

“I want a good starting point, quickly” is way too vague and means too many different things.

Maybe you need to make a few Play Raw threads and see what people come up with.

While trying the different proposed ways of working I have a new question which came up. If I want to use a LUT for a specific look, when is the best time to apply? Right at the beginning of the processing or later after I finished fixing the basics like contrast, exposure and so on?

You’ve said this several times, yes, but you’ve failed to tell us what you’ve tried, what is lacking, and where you feel you’re failing. There have been several suggestions here about paths to take. Have you tried them?

“I want a good starting point, quickly” is way too vague and means too many different things.

Maybe you need to make a few Play Raw threads and see what people come up with.

Of course you are right, my apologies. It’s fairly safe to assume that I have tried a lot of things and ways to do this, including some of the methods suggested in this, and other threads (I’ve been lurking for quite some time

), and have watched Bruce Williams’ videos a few times too.

I’ve been trying to use some of the workflows mentioned in recent threads, such as removing Base Curve, and using the RGB modules (mainly Filmic RGB). I’ve been working up the module order (as I would work top to bottom in Lightroom), applying the ‘Basic’ module for exposure and black point (and maybe Saturation/Vibrance as needed), then moving onto the Filmic RGB module, and finshing with shadows and Highlights if needed, I also use the Contrast Equaliser (rather than the Sharpen module).

Whatever I do with those though, I still end up with a rather flat image that has no ‘pop’ at all.

I do seem to get slightly better results using a non-Filmic method, using Base Curve, Basic Adjustments and Sharpen. This is pretty much the same workflow I use in Lightroom.

But, whatever I try, I cannot get to a point that the image is something I’d want to share.

I understand but for a JPEG file often the WB is off…not talking RAW here. I have a large number of old vacation shots etc that are not works of art but were shot quickly to capture a moment and the spot white balance does an excellent job almost every time to correct that so why would we perhaps not want the ability to have a module applied in a static or fixed manner but where necessary have it recalculate I am sure there are other applications for this …I am also talking about when they are added to a style and not necessarily in the normal work flow…once applied there would be not need to reinitialize …I just used it as an example…Aurlien replied to me by message that color balance could be used to achieve this by setting the values out of bounds essentially and they will reset themselves as they are not static…I will have to try that …

+1 to that. I’ve learned a lot about how the respective tools work doing PlayRaws. Make sure you also post an objective JPEG, one that ‘pops’, and folk will attempt their approximations and post their XMP files for you to consider.

Yes, please do! There are about half a million ways to develop a photo;
I am positive that we will find a way that will suite you, too…

Thank you for the response. I like your version. The resulting image is rather dark just like the original scene. I notice that you have been true to the methods described in your paper and I’m looking forward to do some experiments and satisfy myself that this approach is superior to the other methods.

I tried to edit this photo a long time ago with the old version of filmic but gave up. The new filmic is much better and easier!

I never anticipated that editing such a problematic photo could or should be easy or automatic.

Ha! I recognize that car!

No, you think you recognize the car! Experts have informed me that this is not a Chevrolet Bel Air as it should be. It’s a similar styled car shown in the exhibition while the Bel Air is being restored.,

This is how I understand the question of the original poster - good default output, comparable to OOC JPG for all those pictures that won’t get an “extra treatment”. Nobody is asking for “automatic artistic interpretation by an AI”, or playing a Stradivari without ever excercising.

This is indeed what I meant by my original question.

Just between you and me: When I arrive home with a collection of new photos I develop the photos in RawTherapee batch and browse the resulting jpgs to select the ones I like to edit in dt. This is the fastest way in my opinion. I can start the process with only one click on a BAT-file and the pc will do the rest.

I disagree with people stating that if you don’t want to spend a long time editing your photos in dt you should just settle with the out-of-camera-jpgs. No, not true! You can do so much better with relatively few adjustments in dt including the automatic perspective correction which I use a lot. A wonderful tool!

If filmic rgb is the new (best) way of editing then dt should use filmic as the default and guide you to use the tools compatible with filmic rgb.

Don’t use base curve before filmic, this isn’t a scene referred workflow, use instead the color balance module.

I’ve tested this workflow in photoflow and darktable and i’ve to address a big issue with the darktable’s filmic. 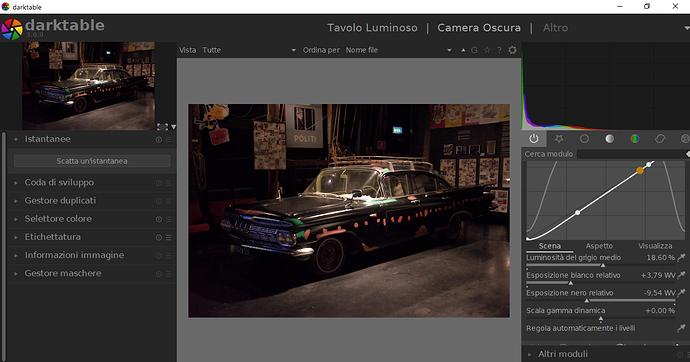 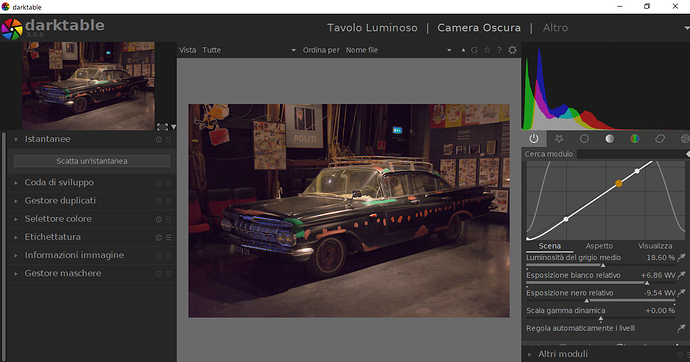 While photoflow leaves the image pratically unchanged
before 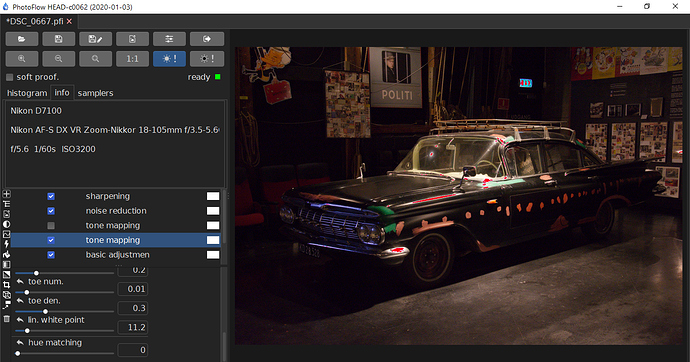 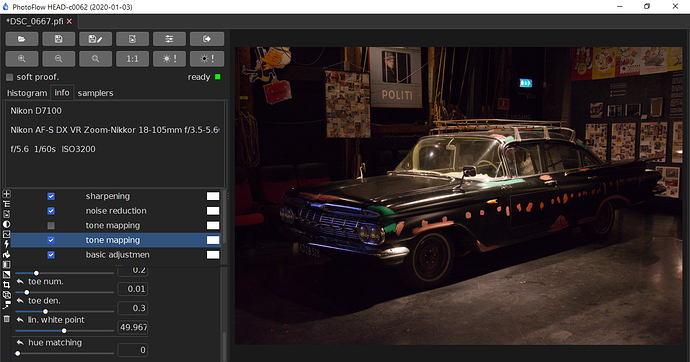 Don’t use base curve before filmic, this isn’t a scene referred workflow, use instead the color balance module.

Thank you! You are absolutely right and it was not my intension to use base curve in this example. I must have forgotten to turn it off working with multiple versions of the same image. 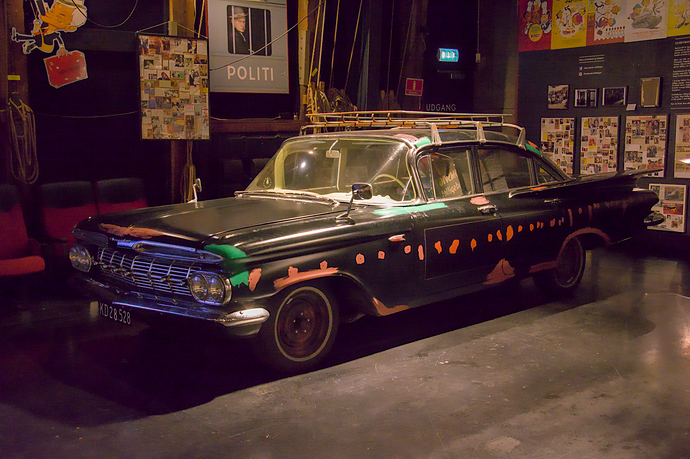 struggling with the Tone Curve module gave me no success

Because that module use the lab trc, not very suited for curves adjustment.
I suggest to use the base curve as a replacement to tone curves ( enable cubic spine and no color preservation) 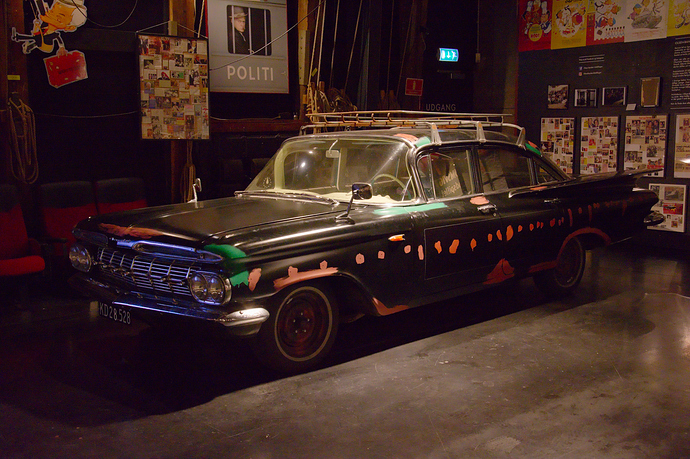 struggling with the Tone Curve

I actually did mean the Tone Equalizer

I’m fine with using curves since DT 0.6, but the TE is beyond my abilities to comprehend and to do something useful with it.