Here is a panorama from a recent trip to Crete, in the Mediterranean sea.
Three shots stitched with Hugin, and then processed in PhotoFlow:

A storm was approaching from the mountains behind, that created a very nice contrast with the setting sun of late afternoon.

What do you think?

Bloody hell that’s a fine stitching job Andrea… cannot tell joining points and water is a massive PITA.
It is nice the promes of warmth here on the far right with the golden rock then fading first to the emeraldsih liquid and more so to the gloomy sky; yet in the other end the sun (or at least a strong light) pierces through. Very nice, love the processing, the only tinny bitty thing that I miss is a bit of air on the top, hills need ro breath too

Questions:
How many shots?
Did you went into the sea?

Very nice image. Though a clockwise 0.5 degree rotation would improve it imho.

What I have against it is that it reminds me of the curvature of a toilet paper roll core.

would be less offensive.

the only tinny bitty thing that I miss is a bit of air on the top, hills need ro breath too

What I have against it is that it reminds me of the curvature of a toilet paper roll core.

To be fair, I must say that the final image required quite some work to fill holes at the top and bottom edges.
The full story is that I took the image at the end of the day, with a memory card almost full of pictures of my kids that I didn’t want to sacrifice, hence I only had 3 shots to make the panorama. Light was changing too fast and going through the images to delete some was not an option…
Normally I would have framed the individual shots vertically, to leave more space at the top and bottom (things can always be cropped away after the pano is assembled). However, in this case I had to frame horizontally at the widest possible focal length, and tried to move as straight as possible…

The starting point was not too bad, but a simple crop would have removed a lot of important details, including the mountain tops:

I filled the black regions using the liquid rescale GIMP plug-in, which is probably the reason why @afre is seeing a “paper roll core” curvature in the image (good catch, by the way!!!).

So here is a second attempt, in which I have used GMIC’s patch-based inpainting to fill the black areas at the bottom. I have also did a bit more of reconstruction in the sky to get some air above the mountain top.

Though a clockwise 0.5 degree rotation would improve it imho.

You are absolutely right!

What do you think of this new version?

For curiosity, the mark in the map (near the right edge) shows the exact place were I was standing when I took the three shots: 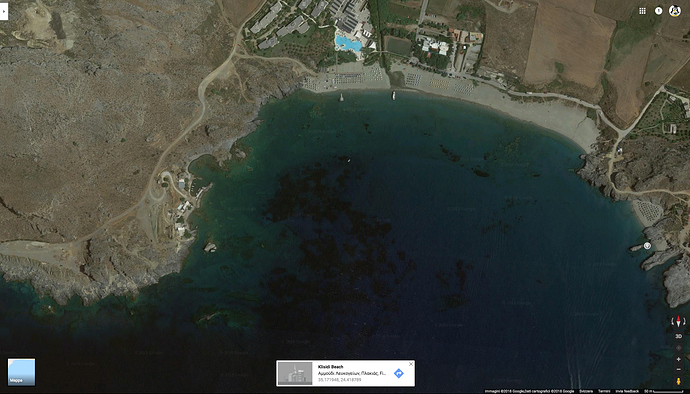 The stitching was done in Hugin using the automated assistant. The water came out as it is without any manual intervention… stitching took not more than 10 minutes.

Thanks for all your comments!

What do you think of this new version?

You should have erased your kids’ photos. God would have locked the delete button and we could have a new, modern festivity. We need more faith or maybe just extra cards

Thanks for taking the time to sparkle us with more details, je je.

@afre where are you writting your posts from??