I went out to a deserted parking lot around midday today, in order to shoot some raw images to be used to generate a DCP color profile. But once there, I realized I didn’t really know how I should place my target and camera given the current position of the sun.

So I set up the target and started with the tripod placed between target and sun (see A below) and then moved the camera around the target in 45° steps (see B to H below) on the assumption that one position would be the one I should have already known to use: 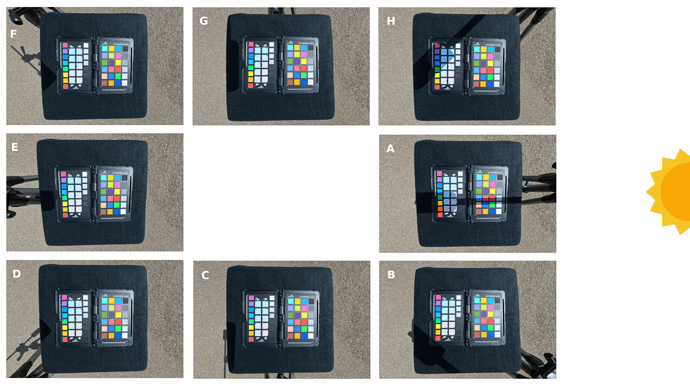 Above, I’ve added a sun, and laid out my shots such that I start with A (sun directly behind tripod) and work around from there in 45° steps (I hope that what’s happening is obvious anyway from the tripod legs, that you can see, and the resulting shadows).

On getting home, I looked at the “How to Create DCP Color Profiles” RawPedia page again. It includes this picture: 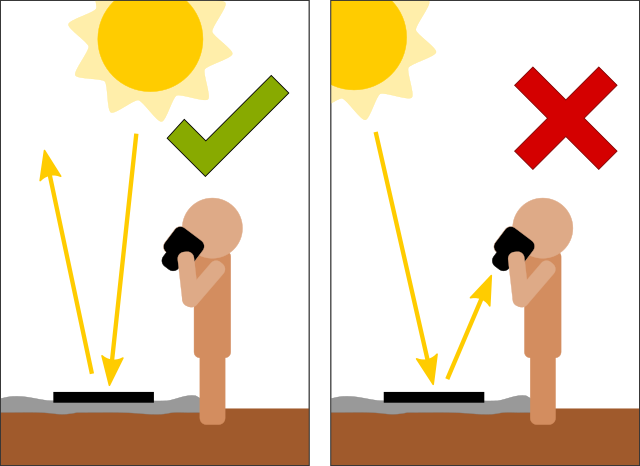 So my E image above looks like the bad

case (the target is between the sun and the tripod with the camera), whereas the middle ones (G and C) and the left ones (H, A and B) look like they could correspond to the good

So which is the best setup? In a number of shots, the shadow is problematic but I could have resolved this by rotating and/or moving the target away from dead center. At the moment, I think B (with a little bit of rotation) looks nearest to the ideal of the RawPedia image. Or perhaps C or G?

This was the setup, I used - with the camera directly over the target (rather than off to one side as in the RawPedia image above): 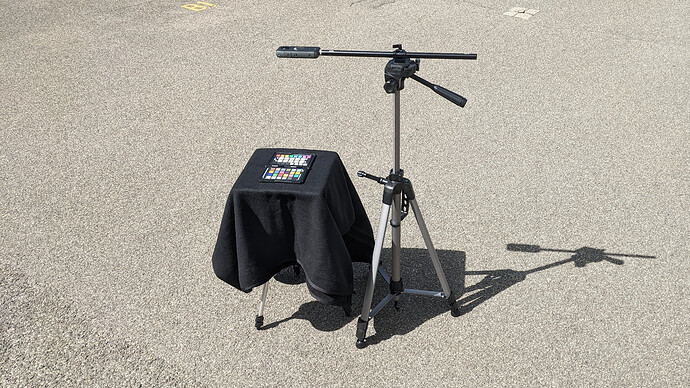 The camera (an Instanta360 One X2) is attached at the end of a 15mm rod. If there are any obvious ways in which this setup should be improved (in addition to getting the correct angle to the sun), I’d appreciate any input.

Thanks for the reply. To be honest all of the pictures I took look very similar to me - I don’t see problematic glare in any of them (but I do see problematic shadows). But I’m not an expert and it looks like the RawPedia diagram is trying to provide a rule to achieve the best result. However, I have difficulty interpreting what it’s trying to tell me.

Actually, given that the lens is always directly above the target, it should make no difference where the tripod legs are relative to the target, no? So, I’m wondering what the RawPedia image is trying to tell me at all?

Also, I try for a cloudless day, so the primary illumination is the direct sun, so the light can truly be called “daylight”.

Take a look at the black plastic in the corners of the color checker and notice that they show the reflection of the sun. I do a lot of color critical photography and work pretty hard to maintain consistent lighting. I avoid getting those kinds of reflections on my color checker shots.

It will not take much to make a dramatic change between the sun and checker and camera. Place something (like a phone or a small set of keys) under the color checker on one side. If it makes the reflection worse, put it on the other side.

you probably won’t avoid all of the reflection, but as long as it isn’t creeping into the swatches you’ll be fine.

I really appreciated the earlier replies about glare, shadows, blown out values etc.

But I was also hoping for something actionable that I could directly relate to the images I’d taken and included in my initial post.

Your reply is exactly that - much appreciated . In combination with the earlier answers about what I’m aiming for, this gives me enough to really do things much better next time.

Also H and A images have a shadow of the camera on the color checker, this isn’t good either.

I recall hearing or reading that checking with a color picker the 4 corners in black area’s and if they were more than some threshold value different then the shot was likely not considered valid. I can’t recall where I read this or the value but if I have time I will see if I can find where that came from…

Welcome to the forum!

… and it looks like the RawPedia diagram is trying to provide a rule to achieve the best result. However, I have difficulty interpreting what it’s trying to tell me.

Imagine the chart is really a mirror. Can the camera see the sun reflected in the mirror? If it can, then that’s bad. That’s what the diagram is saying.

Of course, the chart isn’t a mirror. The opposite extreme would be a Lambertian reflector, where the angles would make no difference. The chart will be somewhere between those two, and reflections may be a problem even if the camera wouldn’t see it through the mirror.

Actually, given that the lens is always directly above the target, it should make no difference where the tripod legs are relative to the target, no?

Correct. Rotating the camera around the lens axis will make no difference.

However, if the sun is higher than about 45 degrees above the horizon, a better setup might be to tilt the chart away from the sun, and tilt the camera so the sensor is parallel to the chart.

Certainly avoid shadows on the chart.