Hi,
is there a way to view clipped pixels??
I mean as in RT or DT with a button

Sometimes I use Threshold to check for clipped colors, but this is not exactly convenient. There are two open bug reports:

But there hasn’t been any activity on these bug reports since 2007.

With GIMP 2.9 being able to easily produce colors >1.0f and <0.0f, an option to quickly and easily display out of gamut colors would be nice.

Thanks a lot,
we are waiting…

@dafrasaga if you want something to happen you must show your interest where most GIMP devs can see, and this is not that place.
Register on GNOME’s BugZilla and show your support under the links @Elle posted.

@Morgan_Hardwood is right, showing an interest on the actual bug reports is a good thing to do. If you don’t already have a GNOME account, the first step is to create one. Then just add yourself to the “CC” list for the bug reports that you are interested in.

Is Threshold under Colours any use?

Is Threshold under Colours any use?

Personally I don’t think I’ve ever used Threshold directly for editing an image layer. But I do use it to make layer masks for isolating, for example, very bright/clipping colors.

Back when I used PhotoShop I used Threshold for picking out zones (as per the zone system), using masks and layers. This isn’t easy to do in GIMP because GIMP doesn’t provide adjustment layers.

The reason I set up the Threshold layers in Photoshop for picking out zones was because my monitor at the time was really awful, with a completely too high black point. So figuring out “what zone is the shadow information in” was the only way I could think of to avoid producing images that looked very, very dark on other people’s monitors. More generally speaking, it was a nice way to see exactly how the image tonality was distributed “in reality” as opposed to “what it looks like on the screen I happened to be using”.

Threshold can be used to check tonal distribution even in GIMP, just by moving the sliders to appropriate values. But currently this requires making a “new from visible” layer every time it’s used. Then just cancel the Threshold operation once you’ve used it to explore the image tonal distribution.

As a workaround, until this option is implemented directly on Gimp, what about using G’mic ?

In short, you open your image and you “color” its over-underexposed zones through the G’MIC “Multi thresholds” filter, for instance. 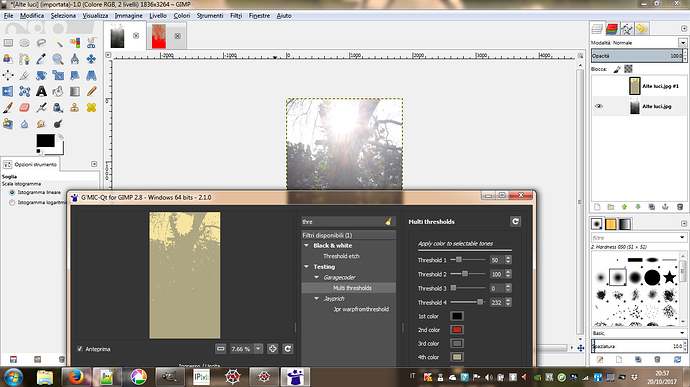 That is what I would do in the CLI. This filter generates a composite of color coded Boolean images from values greater than or equal to the threshold amounts. So, in response to the original question, this would only address the highlights. I suppose another method would be to select whites or blacks using the color selection tool.