Hello! According to rawpedia, cameras often shoot underexposed photos in raw, so they can properly adjust the exposure in post using curves and with some denoise (and other adjustments), produce the final JPEG. That is the case with my camera as well (by selecting the “linear curve” under RawTherapee’s exposure settings, the image appears way darker than the JPEG). I’d like to ask, what would be the recommended way to deal with this? Simply select the “flexible” tone curve, or figure out how much my camera underexposes the picture, and try to “overexpose” it (according to my camera) in manual mode so I get a neutral result? The latter seems better to me.

Idk, but i think it’s better to use the tone curve or other tools. I simply increase the exposure and it works pretty well.

The issue is that this increases the need for stronger noise reduction.

That’s actually true. If you have troubles with noise, you better look for other methods.

I don’t, but I just wanted to know what you guys do and possibly if you have any tips on how to get the best results, because of course, denoise comes with a cost.

The issue is that this increases the need for stronger noise reduction.

Not necessarily, or at least you can keep it very much under control. Does depend a bit on the image, though.

There are a few ways you can increase “exposure” (lightness):

Andy mentioned 3 of those those in his Raw Therapee Basics: 3 Ways to Lighten Images […] video.

EDIT: Denoise does come at a cost, but when handled correctly and in combination with one of the 4 above mentioned methods you can get great results. Especially when using area targeted denoise via Local Adjustments and/or wavelets denoising.

I know this might look like a smart-assed answer, but it’s really what I did in the same situation - I got a camera with better dynamic range. I went from a Nikon D7000 to a Z 6, and most of my inclination to denoise went away. Really.

The reason cameras “underexpose” that way is because the metering modes use the JPEG rendition for evaluating the exposure. This rendition already has a tone curve applied, which drives the metering mode to use an exposure that lets in less light, at least in a lot of cases. And yes, it’s scene-dependent.

I grew tired of messing with the ETTR “pet tricks”, which directly address your lament, so I upgraded the camera and also shifted to just using its highlight-weighted metering mode. Doing this, I effectively traded shadow concerns for making sure I didn’t blow (most) highlights (it’ll still blow some, but they have to be in-scene strong lights). And then, in post, I mess with various tone curve strategies to put the lower tones in a good place. I rarely have to use denoising with this camera; I did recently with a set of shots of a steam locomotive in very low pre-dawn light, but the application required was far smaller that what I recall needing with the D7000.

I know, this is maybe not a viable option for you depending on your available budget for such things. So, you’ll get good advice from others here on the best application of denoise. But, if you’re really interested in treating the problem at its source, you’ll want to eventually procure a camera that provides the best data to start with. Me, I came into a windfall, and I used it to do just this rather than more lenses or somesuch.

For what it’s worth…

I didn’t know about ETTR, yet it was exactly what I had in mind. Your reply has been very enlightening, thanks!

That is the case with my camera as well (by selecting the “linear curve” under RawTherapee’s exposure settings, the image appears way darker than the JPEG). I’d like to ask, what would be the recommended way to deal with this?

Just picking up on what you said…this is to be expected if you load your image with a linear curve to some extent…It is going to be darker as your JPG will have a curve and exposure bump. Using the dcp profiles for your camera should give you a good starting point if the RT default profile does not…you can add or subtract the look or tone curve as you like…you can get this by installing adobe DNG conversion software. Might be nice to see how the noise is…maybe also try some of the demosaic options with your camera I have seen differences in noise when experimenting with those…In the end you are going to have to use some type of curve…rarely can you leave it with only a linear input…so via DCP or manual or automatched tone curves you will find yourself managing this to some degree…

Perhaps I was not clear; I don’t have an issue with noise or the final result, my question is whether to rely solely on post (curves and such) to get the best result (theoretically) or if I should attempt some ETTR while shooting and doing smaller curve adjustments later. Judging by the fact that the auto-matched tone curves RT generates (which I really like, and are close to the JPEG) are always 100% above the linear curve, indicates that I should attempt some overexposure while shooting, right? 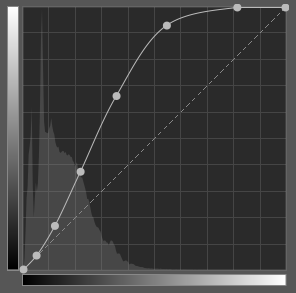 Well not really the curves are really more about managing tone…and how your shadows and highlights are compressed ie the roll off and contrast controlled by how steep. This does darken and lighten portions with also affects color but exposure is really just a linear offset…add a bunch to all pixels or take some away…This is why you can also lose detail in the highlights with curves like this one …look at the top part of this curve compared to the linear values…the last two points and to a degree the third are giving all those values basically the same value…this is a gross over simplification…but if your exposure or offset is too much this curve will clip a lot of hightlights…its a bit of a dance with exposure and tonal editing…

@MinePro120: Look at the histogram you posted. The top half seems unused. The peak is in the bottom tenth. Assuming each square horizontally represents one stop, then very few pixels (if any) are in the top five stops, and more than half of the pixels are in the bottom two stops. So to make a reasonable image, the curve needs to drag detail up from the shadows of the raw data.

Shadows are unsatisfactory for two reasons: (a) not much light has reached the sensor so we get photon shot noise and (b) not many bits are available for recording this data, which may create in-camera noise and will certainly create banding when contrast is increased by the curve.

This suggests the in-camera exposure could be increased by up to 5 stops without causing much (if any) clipping. The curve will be less severe, and the result less noisy. Yes, this is ETTR.

@snibgo When I shot this photo, the camera said that the EV was 0. So it seems I have to disobey the camera and go for +1 EV or more. Thanks, that’s all I wanted.

So it seems I have to disobey the camera …

Ha! Who is in charge, you or your camera?

Yup. Things like this are why I almost always shoot in manual mode and adjust the shutter based on what I see in the histogram and zebras.

If the image appears underexposed, no problem - but I want to move the histogram as far to the right as possible WITHOUT blowing out stuff I care about.

If I have a scene with excessive dynamic range (e.g. if I expose for highlights, the shadows will be problematic) - well, hopefully it’s a fairly static scene and I can bracket the shots and feed that bracket to hdrmerge.

Thank you all for your replies, they have been quite helpful.

Wait until you read this:

ETTR (as commonly implied) is not universal panacea. You have to know your camera sensor - sometimes it pays to shoot at higher ISO if your scene and subject permit it.

To my understanding, the article didn’t contradict ETTR (but as the author states, it encourages it). A (possibly) counterintuitive conclusion was that sometimes, raising the ISO (without clipping highlights) would yield less noise than applying exposure compensation in post. But aperture and shutter speed seem to always be the recommended way to do increase the exposure.