Just a guess: related to disabling crypto-mining in the NVIDIA drivers …

I don’t quite understand what crypto mining is.

I also have an Arch-based Linux on a pendrive. Is has the 465 Nvidia driver, performance seems to be ok. On the internal ssd I have Debian Bullseye. Obviously that driver is even older, I think 460 or so.
But the first Nvidia driver that I installed on Windows in May was the 462 driver. And there was a performance issue already.

Your observations sound more as if the issue is more related to the quality of the drivers, i.e. Windows vs. Linux than related to some restrictions introduced into the drivers recently.

I guess the graphics cards that I have are not really suited for crypto mining. The MX250 is ridiculous and the GTX 1660 Super is not so powerful either.
Something is wrong here… something is mysterious.
Someone should test whether opencl works with other apps on Windows.
I have googled a lot because of this problem and I did not find anything helpful or even similar. It’s not possible that none has upgraded their driver recently. It’s not possible that nobody noticed that the Nvidia driver for Windows is broken, is it?

Or PerformanceTest FAQ Index - and they have a large database of test measurements, so you can compare yours with those of others.

I guess the graphics cards that I have are not really suited for crypto mining. The MX250 is ridiculous and the GTX 1660 Super is not so powerful either. 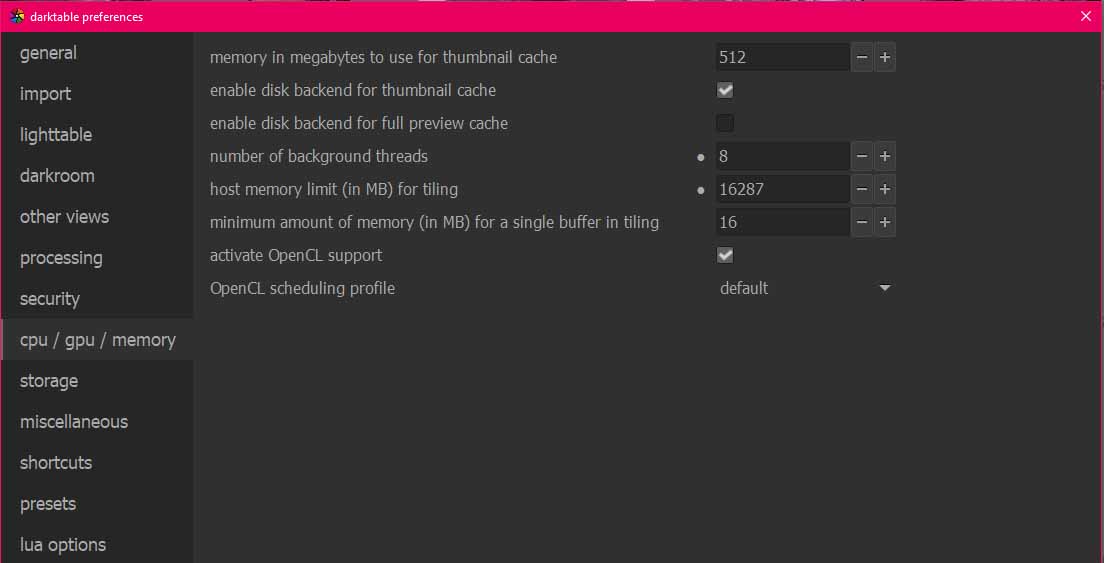 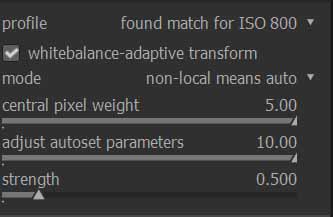 Good luck. I hope you can find the solution to the problem you are having.

Should you be on default in OPENGL DT setting or would the faster graphics settings work better?I still don’t think this is the problem I have a crappy older NVIDIA card that uses OPENGL with ON1 photo raw and it seems to work fine. I think you should maybe try as @kofa says to benchmark it and see if the numbers seem okay just for the hardware as it is configured. GpuTest - Cross-Platform GPU Stress Test and OpenGL Benchmark for Windows, Linux and OS X | Geeks3D.com

Also are there any setting that could be needed in the bios. You might just want to review those to the best of your ability in case there is something weird there like the cache is disable or something stupid…just grasping at straws but you never know

EDIT…maybe see if you have a bios update??

Any chance your motherboard has onboard gpu?? If so maybe be sure it is disabled If your system benchmarks without DT involved are slow maybe review your BIOS settings one by one and if there is a bios update maybe give that a try. Hope you find the problem…must be very frustrating

OpenCL™ (Open Computing Language) is a low-level API for heterogeneous computing that runs on CUDA-powered GPUs. Using the OpenCL API, developers can launch compute kernels written using a limited subset of the C programming language on a GPU. NVIDIA...

If those run fine you can at least exclude that your issue is hardware / bios / driver related.

Guys, I am telling you this is not a problem that just I have. The new Nvidia drivers are broken. But it is difficult to notice it if you don’t have both Linux and Windows.
What I am trying right now: I am downloading the oldest driver that is still available form Nvidia (457/451). Let’s see if that one is broken too.

I also applied some other modules since I had to create some noise to remove. I’d say 2 seconds for denoise only is quite slow.

When you use your MX250 how long does it take?

On Windows, I think I get the same performance as you 1.something seconds if only basecurve + denoise non local auto are active.
I think there is no significant difference between with and without opencl.
I am about to download msys2 so I can actually measure the performance on Windows.
On Debian, dt seems to be a bit faster, but there is no difference between opencl and no opencl either. Actually according to darktable -d perf, without opencl it is even slightly faster, I measured 0.9 seconds. With opencl seems to be 1.1 seconds.

Edit: On Windows, 2.0 seconds with opencl and 1.5 seconds without opencl (according to darktable -d perf).

nevertheless denoise on all system took round about 2/3 of processing time independently whether GPU was used or not.

Looks like the relationship between CPU- and GPU-performance is very important here. If you have a fast CPU but a low to medium fast GPU enabling GPU does not help much in processing, in contrary it might even run slower.

@betazoid your CPU is just so fast that the GPU does not give you an additional boost in performance. The only chance I see is to distribute CPU/GPU power for calculating preview and full image as @MStraeten already suggested.

I don’t know anything about how nvidia cl stuff works on windows. Can only speak for darktable on linux.

There have been quite a number of performance gain achieved in current master, especially if you are using the release version as that uses -O3 which vectorises much better leading to a performance gain of up to 50% for some modules. That depends a lot on the cpu hardware you have but in general dt cpu modules got really faster.

For OpenCl this has not changed, some modules are very good on opencl, some are not. In general, some modules OpenCL code performance depends heavily on the graphics card memory transfer speed. The profiled denoise is the best example. So a 750M card will likely not be faster for that module than a current cpu, the quadro 1200M is faster but also on a not-so-fast memory bus.

If you have a dedicated graphics card with fast ram & 256bit wide bus, the story will be very different.

In general, if you don’t have an exceptionally fast graphics card you will be likely better off distributing load between cpu and gpu as @MStraeten suggested.

I noticed that there were performance optimizations in dt 3.4 and 3.6. When I bought my laptop, the stable version was 2.6 I think. At that time, almost everything was better on the GPU. I think meanwhile there are more modules that are (heavily) multithreaded if they use the CPU.
So dt 3.4 and 3.6 performance is not so terrible any more without a good GPU.
Well, time flies…
Anyway, dt 3.5 is quite fast with opencl on Linux on my new desktop PC. In general, it needs about 1/3 of the time that is needs with CPU only processing. It’s most noticeable when I add more modules.
But there is a performance problem on Windows. Yesterday, when I tested on my laptop that had an old Nvidia driver installed, the performance seemed to be ok.
The performance results seem to be different and sometimes confusing on my laptop, but one thing is sure: performance is significantly better on Linux, with and without opencl.

You may want to try the following:

And/or set it manually:

Does anybody know a filter in Gimp that is suited for performance testing? Afaik Gimp does use opencl.

OpenCL Benchmarks - How to evaluate performance

How fast is your OpenCL? Discover which OpenCL benchmarks and tools are available to help you evaluate your OpenCL performance and test your implementation.

Sorry it this is not of any use…

So I ran Geekbench on both Windows and Linux, the results are quite similar. So apparently Opencl is not broken on Windows? 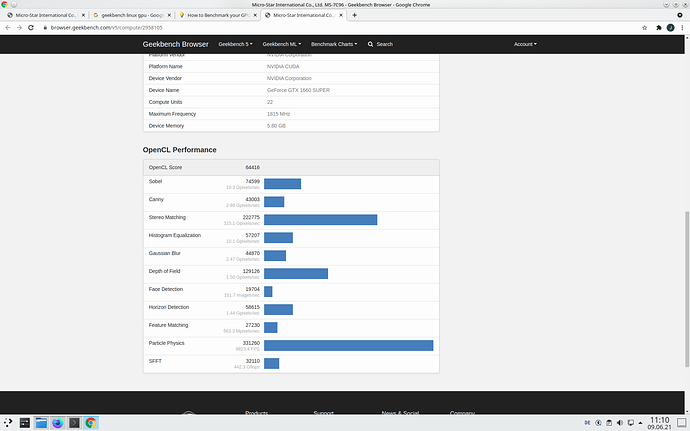 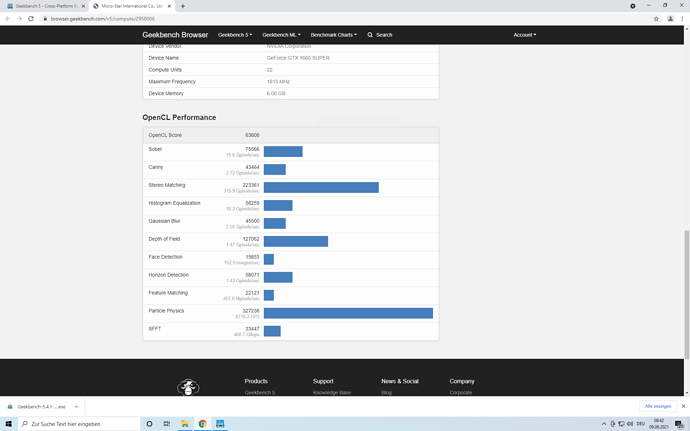 The Luxmark result is on Windows 17041 and 16879 and on Linux I also ran it approximatley twice but I only wrote down the result once, 16420 (the first result was also 16something).
So it really looks like there is nothing wrong with Opencl on Windows.