Is there any current way that Darktable uses to indicate/label hdr images to the user that I don’t know of?

There seems to be a serious UX deficiency in lighttable when dealing with hdr images and that is that you don’t actually know what image is an hdr stack. This problem becomes even bigger when you are dealing with hundreds or thousands of raw images and hdr stacks.

To illustrate the problem:

What image on the lighttable shown in this screenshot is an hdr image? 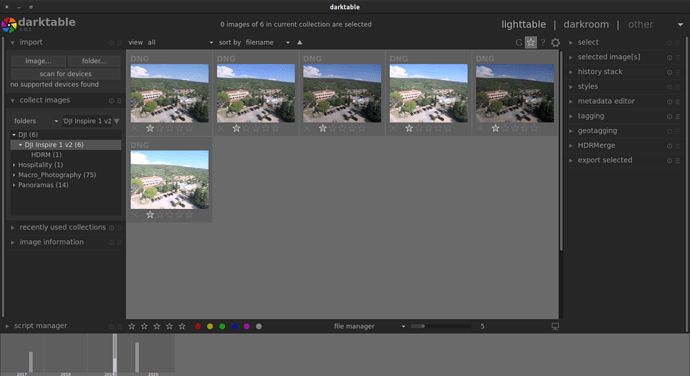 Now I’ve quickly mocked up a feature that would be very good to have to solve this issue: 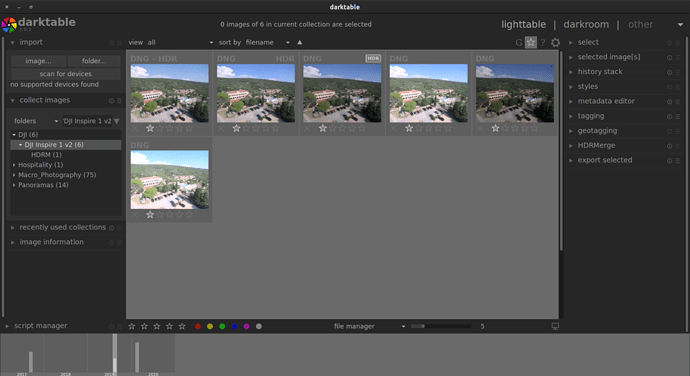 My question is, is there a plugin or a native way of doing this in Darktable already or should I work on a feature request?

What is the criteria for marking an HDR image? I make my HDR images with HDR merge, then import them in.

What do you mean by criteria for marking an HDR image? Like a metadata, a filename or something?

I first import my images, triage the source stacks and then make the HDRs via HDRMerge or the Darktable native hdr merge. But as you can see on the screenshot, you can’t differentiate the first image (which is in fact a merged stack of the images that follow it) from the source images.

This is b/c the source images were captured with a drone that saves DNG raw files so when you make a HDR most software generates another DNG and you end up not being able to tell which is a source image and which is a generated HDR image.

If I was capturing images with a Canon camera then I could see the difference between source CR2 images and generated DNG hdr images.

But most of us that work with a drone probably always shoot in AEB mode that captures 5 images at different exposures so it’s a big deal when it comes to working and merging those images in Darktable.

It can be simply a tag darktable|hdr inserted at the end of hdr merge process. that way you can filter by tag. I don’t think spelling “HDR” on there is any better idication and adds visual clutter.

Unfortunately tags are not visually represented so that really doesn’t solve the issue I’m facing.

Also then all applications for merging HDRs would have to generate an xmp file with that tag which wouldn’t be a right approach imo. On the other hand it means one would have to manually tag each newly imported hdr.

It doesn’t have to be spelled out, it could be a simple icon like Lightroom has.

Is it possible to detect hdr images on import and label them accordingly?

This is b/c the source images were captured with a drone that saves DNG raw files so when you make a HDR most software generates another DNG and you end up not being able to tell which is a source image and which is a generated HDR image.

Is it possible to detect hdr images on import and label them accordingly?

The question is: how can darktable know that the image is an HDR stack and not a single frame that hapens to be saved in a high bit depth format? Without a standard tag, it’s impossible.

I don’t know, that’s what I’m asking. How and if it’s possible?

have to generate an xmp file with that tag

I think tags are actually part of exif data. That’s not a problem then.

Without a standard tag, it’s impossible.

I’d propose that darktable could tag it’s hdr merged image as darktable|hdr, hdr and user using other images could use ANY image tagging app that would tag image with hrd tag.

The 2nd bit - it may not even be a core functionality but a lua script that would dispay HDR info as you want. Or maybe you want another overaly IN the core…

If you want to try and detect an HDR image, I’d guess you’re opening a can of worms. I’d bet there is not standard metadata tag for HDR. Automatically adding the tag/label when you click the darktable HDR button is easy, but detecting if an image is an HDR from all the other applications, proprietary or open, will be a pickle I’m sure.

Is it possible to make a plugin that would overlay this HDR text or an icon for all the images with darktable | hdr tag in the lighttable?

Can you point me to the specific documentation for doing so? I can see there is a lua api, but I don’t know the terminology so don’t know how to find what I’m looking for.

Without a standard tag, it’s impossible. 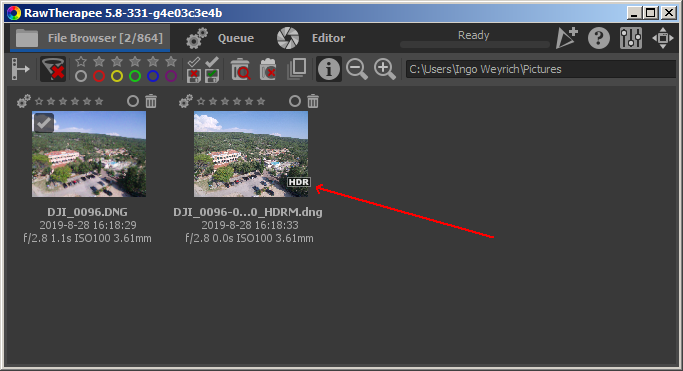 Was going to mention that but was away from the computer. However, to push back just a bit: what constitutes an “HDR” image?

However, to push back just a bit: what constitutes an “HDR” image?

It’s an image which contains several sub-image in the same raw file, as Pentax camera can produce (detection based on a flag in the metadata), or a TIFF image with 16/32-bits float data. I should check the code but it might also detect the 16/32-bit float data for raw image, and flag them as HDR as well.

Thanks for the info. I won’t know because all my files are floating TIFs.

HDR images are nothing special on file level. But there are some aspects we could use to autodetect any hdr.

btw: welcome to the community @hannoschwalm