DCamProf: Creating a DCP for (b&w and color) negatives?

Now my idea is to create a common or film material specific profile for black and white or color negative film by capturing an IT8 target on film, digitizing it and then use the common procedure to create a profile.

For a black and white film this is usually not necessary because inverting the tone curve is sufficient and may keep more film-specific tonality. Anyway, I want to know if it works. To start I have captured a black and white negative (AgfaPhoto APX 1000), exactly cropped the target in RawTherapee and then used “save reference image”.

scanin will have problems with -p, if the target is a negative image, so use -a and have a close look at the diag.tif afterwards.

By intention I use the same illuminant as the target was measured, because it’s b&w.
exclude.txt must contain patch names of all colored patches, so only the last row with the gray patches is left.

-H will suppress the hue shift discontinuity error which will happen in this case.

But neither the gradient images dcamprof creates under negative.test/ are inverted (colors are just lightened up and paler), nor does the resulting DCP cause an inverted image in Lightroom or RawTherapee.

I guessed that this probably won’t work. Is there any trick to make this is possible?

Half-baked thought, in order to compel the transform to invert the tones, I think you’d have to take the neutral patches and change their values in the .ti3 file to their opposite value relative to 0.0-1.0. 0.9 becomes 0.1, 0.8 becomes 0.2, etc.

Oh – this wasn’t my intention

I hope your head is fine again!

This is my target reference image (here as JPEG): 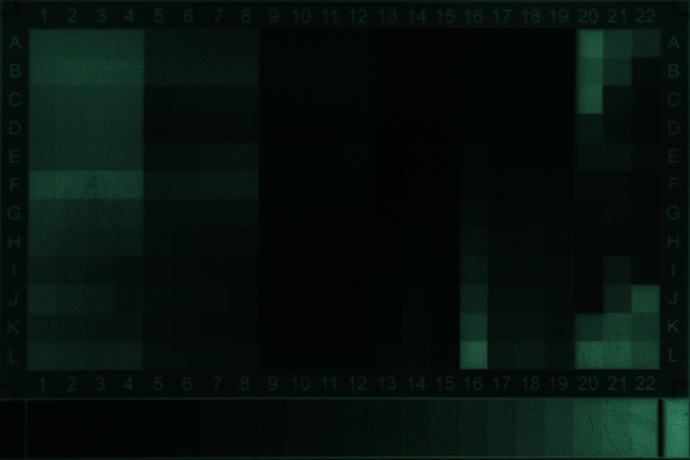 The values measured by scanin are contradicting, as expected: From the left to the right patches, XYZ (from the measurements of the reflective target) decrements while RGB increments (as expected for a negative):

The question is why DCamProf ignores the tonal invertion. I don’t understand what you propose. A profile is made by finding a mapping from measured to expected colors. And here, my measurements increment in brightness. It seems that a DCP cannot deal with a tonal invertion.