First, I gather “deltaE” and “Color Similarity” are two names for the same mask, deltaE apparently being a previous name?

I was reading a thread from 2020 about red eye removal and it included this description of the deltaE mask widget by @agriggio. He wrote, in part “…just move the lightness weight all the way to the left. you will see, as a visual clue, that the lightness slider will fade away, which tries to suggest that its importance is being reduced.”

The current deltaE dialog doesn’t appear to have such a “lightness” slider / behavior as described: 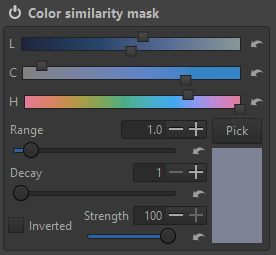 …so maybe the UI has changed slightly? At any rate, I think I functionally – if not technically – understand the use of each of the sliders, but I’d like to confirm.

How far off am I?

Of course, I use the picker to initially ‘seed’ the dialog rather than trying to just hit it manually, but then I start sliding to see what happens.

Hi,
What I wrote is still true (except for the name that got changed to “color similarly” because deltaE is a bit too technical). In particular:

L, C & H - These define the colors’ luminosity, chromaticity and hue ranges as bounded by the left and right sliders, per widget. Nothing outside these ranges is even considered for masking

That’s not how they work. For each bar, the top slider sets the anchor value (i.e. the specific value of lightness, chromaticity and hue of the anchor colour which you can also set with the picker). The bottom slider defines the weight of the channel in the computation of the deltaE (i.e. the “distance”) formula.
DeltaE is a sort of weighted Euclidean norm, something like this:

The mask considers as similar those colors that are close to the target according to the above metric. Range controls the bounds for considering similar colors, decay controls the rate of the transition from similar to not similar. The three sliders set the weights and the L, C and H values.

Just to clarify: the L, C and H in the formula above are the differences between the reference values (set in the sliders) and the lch coordinates of the current pixel – I thought better be more explicit about this

OK, the LCH makes sense …I think, as a non-mathematician! Certainly well enough to use them properly. At least I was essentially correct on the Range and Decay sliders (even if I didn’t express it very well).

Thanks for the clarification.