Okay, so I’m playing with Darktable, and my verdict after a week - it’s a MESS!
I never thought it was possible to find any software as complex as Raw Therapee - Christ, I got that wrong big-time…it’s a total ‘cat’s cradle’.

No facility to introduce external camera profiles, crap colour management, NO way to interface with an external raster editor like Photoshop…and I could add quite a few other things to that list including; No GUI button for FTS, 100% mag, +/-mag - WTF were they thinking leaving those out?

And as for this whole scene/display referred thing, seriously, it’s an answer to a question no one was asking - the whole concept of display referred workflow is just nuts for photography.

But, there are a few things I think are fantastic, and I was wondering how hard it would be to add them to RT.

The first ‘target’ in RT would be multiple instances of the Graduated Filter - only being able to deploy one is a massive failing on the part of RT as it stands - IMO obviously.

Masking facilities are much more extensive in DT than RT - though still hugely primitive in comparison to Ps, or even Lr now - but the DT mask manager is a good idea.

But DT on the whole is really hard work - I’m not enjoying it AT ALL!

Especially when half the complaints arent even correct.

NO way to interface with an external raster editor like Photoshop

May not be as convenient as RT, but IMHO all the essential operations are there…

Darktable seems to provoke extreme emotions and reactions - there are the adorers and the haters, it’s an interesting phenomenon
But it’s positive that you had another look at dt, maybe you can have one more look.
Btw, I think most windows and mac users don’t like dt because it’s relatively slow and buggy on non Linux systems.

I was told that you couldn’t use external profiles - either dcp or icc - so I stand corrected!!

What I meant about raster interface is that, unlike RT, I can’t see a way to open an image directly into a raster editor. As far as I’m aware RT has always had the ability.

Hi Anna - that’s the way it’s always been for me on Mac, but the new public release Mac build runs great on my machine. Only found out by chance.

Yeah, kinda figured you were thinking that, but geesh, “NO way to interface…”

I’m one to talk though, I haven’t delved into either RT or dt to develop proficiency sufficient to use either in everyday work. Still, it’s like visiting any house: “where’s the bathroom?”

In RT, it’s set up in prefs - just add a command line. Once that’s done just process then click the little artists palette icon and hey-presto the image opens in Ps - that’s what I call an ‘interface’.

Exporting the image to it’s parent folder, then navigating to said folder and opening the image in Ps isn’t exactly what I’d call an interface Glenn

Exporting the image to it’s parent folder, then navigating to said folder and opening the image in Ps isn’t exactly what I’d call an interface Glenn

Years ago in my former day-job I ran an interface control working group, or ICWG, and some of the interfaces we adjudicated were just that, file transfers. The specification dealt mainly with the file format, but there was a specification that was mutually understood by both the sender and receiver, ta-da, interface.

Back to raw processing, there’s inherent flexibility in such an interface. Since GIMP will ingest unbounded floating point TIFFs, if my raw processor saves such I can take advantage of the most non-destructive conveyance available for passing images to GIMP for editing. Indeed, I added such export to rawproc specifically to take advantage of that, and I didn’t have to correspond one bit with the GIMP devs…

NO way to interface with an external raster editor like Photoshop

Disclaimer: This isn’t pushing darktable, just a flimsy possible answer to one of your concerns…

I’m certain my understanding of how it works is well short of, shall we say, comprehensive

so I’m just mentioning this so someone else can correct me. 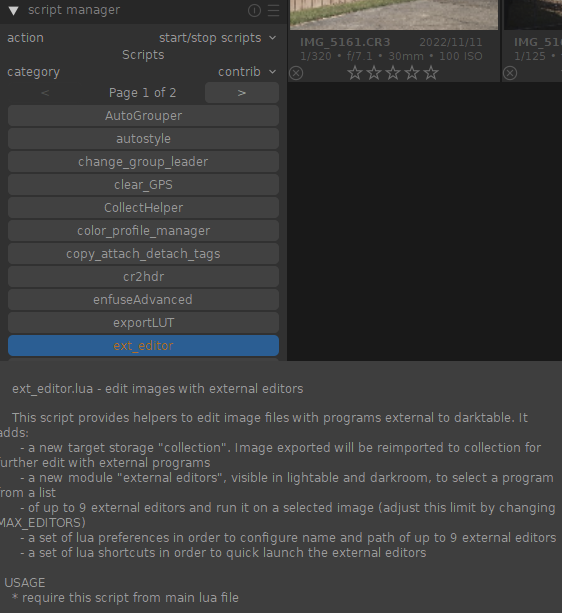 …that’s designed to invoke external editor(s) on files in darktable:

I’ve spent about five minutes on it and I must have something misconfigured because I get a “file type not allowed” error, but I suspect that’ s just me. Of course, you’ll have to setup Lua scripts first, but that was one button click in my case on Windows. Dunno if Mac is easier or harder…

At any rate, I spend most of my raw time in ART at the moment so my at-best-moderate darktable-fu has atrophied a little. However, I’m sure someone here can give a clearer picture of how ext_editor works and whether it would answer that shortfall.

Err… maybe? Why don’t you like darktable then - it’s built around scene referred!

Seriously though, you really need to take some time, watch some videos/read the manual. darktable is NOT that bad. It does have a few quirks, but really, once you get the hang of the workflow, which modules to use (quite a few are only there for backwards compatibility) it’s not so hard.

Oh, and the new sigmoid module (can be used instead of filmic), to me, makes the workflow with colors much more like RT or ART (which I don’t know that much about, so…)

Which bits? There are one or two possible hiccups, and I’m not an expert, but interested. For anyone who wants really accurate colours, the color calibration will accept images of colour charts to make a perfect match with only a few clicks - essentially creating a custom camera profile. (not quite but the effect is the same).

+/-mag - WTF were they thinking leaving those out?

Why in the world (WITW!) would you want to click a button to zoom when you could just turn the mouse wheel? You might have a point with the 100% though - I expect theres a keyboard shortcut though.

I just discovered that!

Should have read the manual…
I suppose the fact that I didn’t know that basic shortcut might be a reflection on the complexity of dt - but IMO it’s nothing (or at least not worse) compared to say Photoshop. You have to learn it. Same as any other powerful software.

You’ve probably already come across this, but if you’re referring to *.icc device profiles (display, soft-proof), you can set those by right-clicking this icon at the bottom of the preview:

As for setting the working space (as in RT / ART) I’ve not seen that but it’s my understanding it’s not necessary in an unbounded / scene-referred system (since there are “no” limits, basically). I could be wrong on that, though…

For export, you set those in the export module: 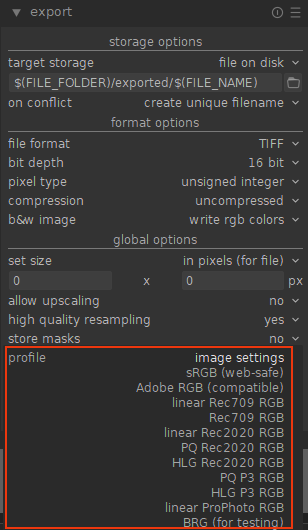 You have to learn it. Same as any other powerful software.

True, but there’s something inherently less conventional (at least) about the way darktable works. I’m not saying it’s inferior, just different. The multi-module paradigm was new to me first time I understood it. Definitely not the same as LR from what I’ve seen.

I’m not saying it’s inferior, just different. The multi-module paradigm was new to me first time I understood it. Definitely not the same as LR from what I’ve seen

I agree, I didn’t mean to imply that darktable works like Ps. More that Ps is complicated too. I just don’t think that dt should be slammed solely for being different.

I didn’t mean to imply that darktable works like Ps. More that Ps is complicated too.

Just so I understand, by complicated are you referring to PS raw edits? I would think that would be the comparison. Unless I’m missing something.