As you see below, DNG pictures look way different in Adobe Lightroom. When I zoom in 100%, the picture is very sharp, so I know it’s not the embedded JPG. In Darktable, you can see the image is displayed correctly without the overexposure you see in Lightroom. What is the reason for that and which view is the default as-is DNG? I personally prefer darktable images, they are more close to the actual shot, but I am trying to understand how this works P.S. DNGs opened in Windows Photos and Windows Photo Gallery look the same as the ones in Lightroom, so I don’t know why only darktable is getting it right.

The source of the images is a LG Stylo 4, the app is OpenCamera. Using the android Lightroom camera gives similar results. 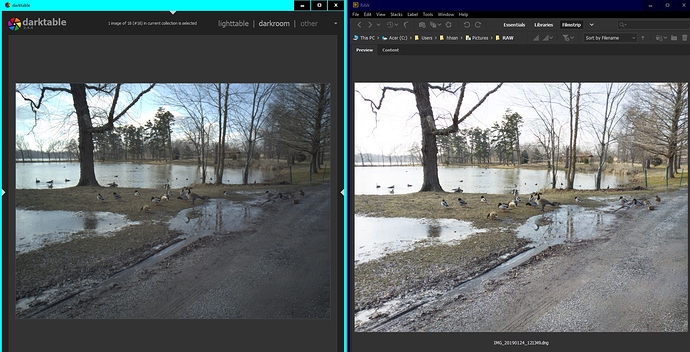 Which is closer to the jpg?

The dng likely has the camera profile (dcp) embedded which I believe darktable doesn’t support. The other apps are likely using this and the embedded tone curve from the dcp too.

Without a sample file, there is no way to verify what you are saying. If your photo looks better in dt by default, what is the problem? That is a good thing, right?

The jpgs are less exposed.
But even on 100% the images look less exposed in darktable compared to any other program I tried. This is not the embedded jpg.

I asked around in the Adobe forums and they told me darktable is not correctly displaying the dngs. So I wanted to verify this, because the darktable images look closer, though somewhat underexposed, to the actual shots.

I asked around in the Adobe forums and they told me darktable is not correctly displaying the dngs.

What does “displaying the dng correctly” even mean? The data is being demoasoced correctly and the white balance looks OK. Darktable does less processing of your image by default than lightroom does.

There‘s more information in the darktable default. The lightroom-default seems to have a lot of clipping already in the sky due to more initial processing

Here is the DNG.

As I said before, darktable isn’t using any tone curve on it. rawtherapee shows it the same. So does IrfanView.

Load it in darktable and set any of the the base curve presets and it looks more like the lightroom version.

Thanks a lot for checking that for me. I am honestly very new to raw stuff. My goal is saving the pictures I take in the highest quality possible (complete with location info, etc). I also would like them to look very close to the actual shot and that is what darktable does it seems. I don’t plan to edit the dngs. My question is: why Windows Photos, Google Photos, and even the built in LG gallery in my phone display a very similar Lightroom version? Do they apply a tone curve as well? Is that tone curve built in the DNGs that cause them to show that overexposed image? I am just trying to understand how this works.

Also do you know of any android app that shows the dngs without applying any of that tone curve? Lightroom does a horrible job … I don’t how it is the most popular raw editor.

I think you have a misunderstanding about RAW files. You’re not looking at a processed image when you first open a RAW file.

Let me explain you the difference to a JPG from the camera:

When you shoot a picture as JPG, the camera postprocesses the taken image. This includes applying white balance, color corrections, contrast, shadow- and hightlicht correction and some more.
Finally it saves the result into a JPG file.

When shooting as RAW, the camera just takes the sensor data and writes it into a RAW file (and includes some metadata about white balance values and other info).
There is no postprocessing in the RAW file, so it looks dull when you first open it. You have to postprocess it by yourself.

And that’s where RAW-converters like Darktable or Lightroom come into play. With some knowledge and experience you can get much better photos than the camera processing a JPG file.

Here’s an example of what I mean:
Take a look at how the image looks at the begin of the video. It’s dark, low contrast, not much color. And then look at the image at the end of the video. This is what RAW-converters are for.

Understood, but I try to get the DNGs to look very close to what I want them to be when I take them, by adjusting the exposure, iso, ss and so on. My goal is to avoid lots of editing (I am not a professional- just want to store high quality photos). So I am looking for a Windows app and an android app that will show the DNGs as close as to how the pictures were shot, almost as-is, without applying any filters.

I opened your JPEG screenshot, then in-turn cropped the darktable side, then the LR side, so I could compare the histograms. The difference I can discern would be attributable to a “tone curve” on top of the initial processing. Indeed, I tried a curve on the darktable crop, and I was able to make an equivalent image just by dragging the top-right point over to the left, just to scale the image data.

I personally prefer darktable images, they are more close to the actual shot, but I am trying to understand how this works

Ah! You’re starting to ask the same sort of questions I asked about three years ago when I started to re-explore photography. What I found is that raw processors, including what your camera does internally, do various levels of processing to present you with what you might call a “photograph”. LR and its ilk tend to do more, RT and dt a little less, depending on how configured. Even dcraw, the basic command line raw processor, scales your image for output by default, and you have to explicitly tell it not to.

What I found works for me was to come to understand Every Single Thing that has to be done to a raw image, and I mean ‘really raw’, in order to make it presentable. It’s not a lot:

#4 is where so-called ‘secret sauce’ of cameras and softwares resides, but I’ve found a simple linear scaling is all it takes to make my proof images, and a lot of times those are good enough for the family.

Why don’t you just store the dng’s?
Whenever you need, you can always pick one of those, do a quick edit and voilà, there you have a high quality photo.
Do you have in mind just storing high quality jpg’s?

@DrGogu Do you know photography?

If not, start here: https://www.cambridgeincolour.com/tutorials.htm.

If so, basically, your image is about 1.5 stops more exposed when you open it in LR and Windows image viewers than when in dt. This doesn’t mean that your DNG is any less good; i.e., the data is still there. What is different is one of two things or both:

How to solve this problem is simple. Open it in LR / viewer, lower the exposure and generate a new thumbnail or preview. AFAIK, you can do that in LR, PS, Adobe DNG Converter and likely your phone’s camera and image editor apps.

Alternatively, just edit the DNGs, export TIFs or JPGs and decide whether you want to keep the DNGs.

Thanks for all the replies.

As I said I want to avoid editing any photos. Just quickly browse through DNGs the same way I would browse JPGs. I am looking for a Windows and Android apps to view DNGs quickly without them adding any exposure shifts. I saw IrfanView mentioned. Anything for Android?

Adobe Bridge is fast but it adds that nasty overexposure.

The gallery app on lineageOS can preview the dngs produced by OpenCamera.

It doesn’t take that much more work to make the adjustment or generate new previews for LR or Bridge. You choose one item from one dialog, apply it to every file and voila. Same goes for dt and all other apps.

Other than that, underexpose your images by 1.5 EV but that would hurt your dynamic range.

PS If you really don’t want to touch anything, then JPG is still an option. There is no shame in using JPGs. We share and print them all of the time, not the raw files. If you have an app like OpenCamera, you probably have enough settings to satisfy your photography needs without needing to go into raw.

I tested IrfanView and there is a major color difference. Blue shows an obvious purple hue (see pic). I tried playing with the settings in the Plugins section (camera white balance,…etc), but it doesn’t fix it. If I uncheck the camera white balance, I get a red hue over whole image. 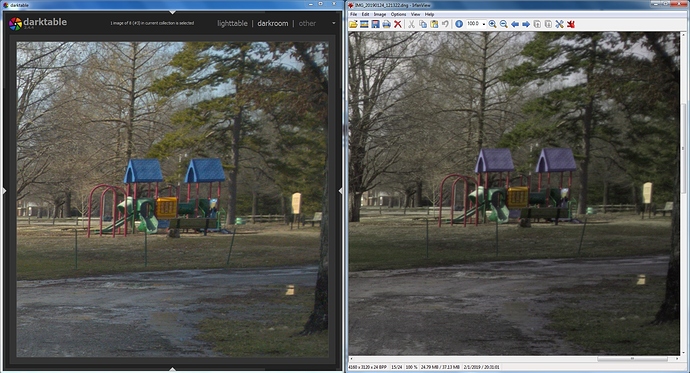 Is there any way to fix that and make it look like darktable?

My question is: why Windows Photos, Google Photos, and even the built in LG gallery in my phone display a very similar Lightroom version?

As I understand it, the dng contains a camera profile which has a colour matrix and a tone curve. dt seems to be using the colour matrix but not the tone curve. The other apps you mention are probably using both.

If you really don’t want to edit your photo’s then you’re best getting them right in the camera and saving as jpegs. Take the photo and look at it. If the exposure isn’t how you wanted it then change it and take the photo again until you get something you like.

Does opencamera have the option to save as raw+jpeg? That would probably be your best bet.