Hello,
I’d like to say a few words about a new command I wrote these last days, namely output_obj.

This basically implements an export feature from G’MIC 3D meshes to the Wavefront .obj file format, which is a text format that many 3D viewers / modelers can import (including Blender, which was my target here).

A few things to know about this new feature:

(here, gmic3d is a G’MIC command that generates a 3D mesh).

I personnally use meshlab for a quick visualization of the generated .obj file: 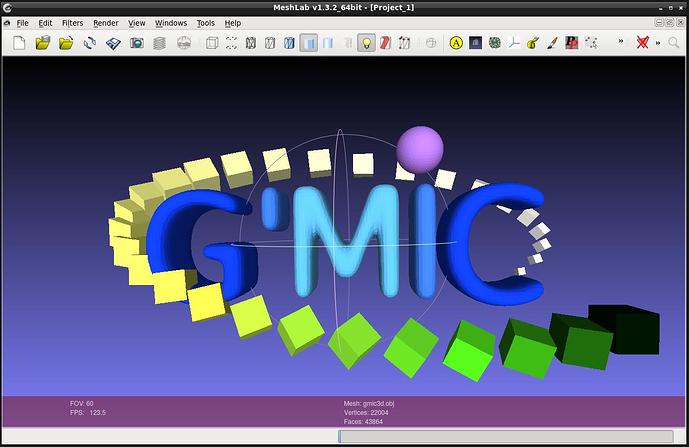 But, you can import it in Blender as well (with File / Import / Wavefront (.obj)): 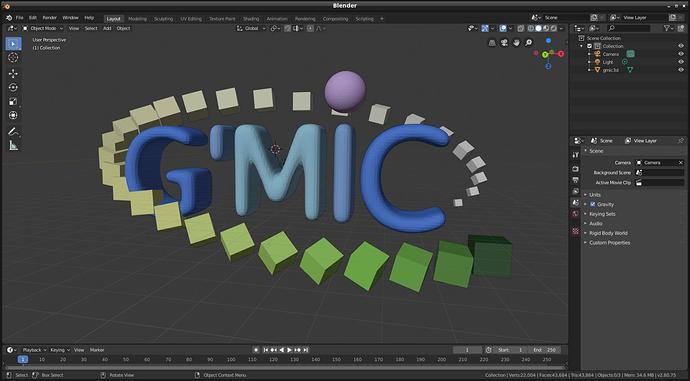 Example: Using G’MIC to generate a textured 3D elevation from an input image:

and you get this: 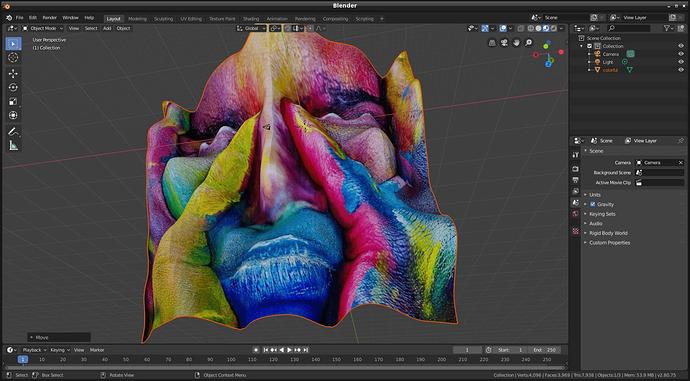 It takes a torus, creates a loop of interlaced torii from it, and do this recursively with the new shape obtained.

This generates a 1679616-primitives object, that looks like this: 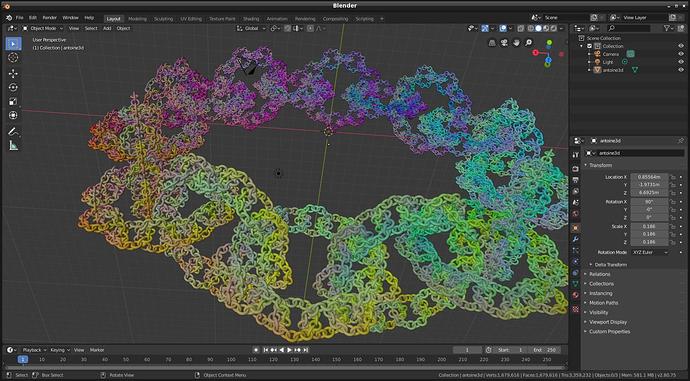 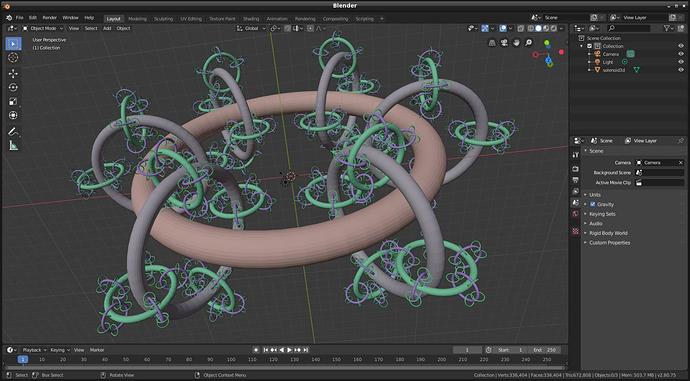 Things that have not been done, and limitations:

That’s it for now. I hope this will be useful for some people in the future (it will for me, without any doubts).
Cheers,

I have allread some ideas how to use this. When is the new release planed?

It’s actually working for current stable version 2.9.4, after a filter update.
Also, I’ve uploaded a new pre-release of 2.9.5 today, for Windows, in the pre-release page

Hmm, theoretically someone could code a landscape heightmap generation filter and export a 3D version with this.

If I have height map turned into a surface, that is like pyramid top (or chocolate bar top & side-bevel faces), how would you add bottom faces and make it a manifold mesh in G’MIC?

Simplified example: take gmicky the tiger, make it a relief plane… how do you have it as a relief cube, where the top face is the relief surface, and the the bottom face is flat like a plane?
In Blender, by hand, I would extrude the relief plane on Z negatively, and scale on Z to 0 the bottom face’s vertices, then uniformize all normals…

If I have height map turned into a surface, that is like pyramid top (or chocolate bar top & side-bevel faces), how would you add bottom faces and make it a manifold mesh in G’MIC?

Not that easy with the existing commands, but actually I’m working on a new one to do exactly that : a kind of 3d elevation, with a solid base.
This is what I get : 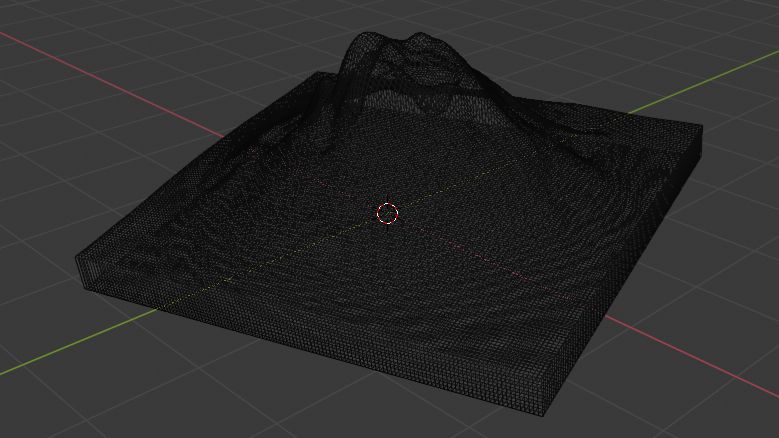 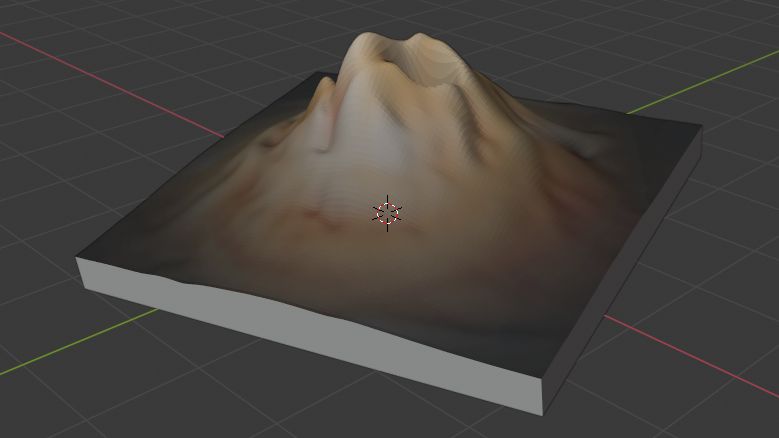 Let me know if you think that could be useful for you.

Is it possible to turn a 3d image into a 3D object via threshold? I feel like I can finally open up to creating 3D fractal.

EDIT: To expand, each pixels are boxes. And I would like the united boxes in 3D. Then export.

Could you provide a visual example? 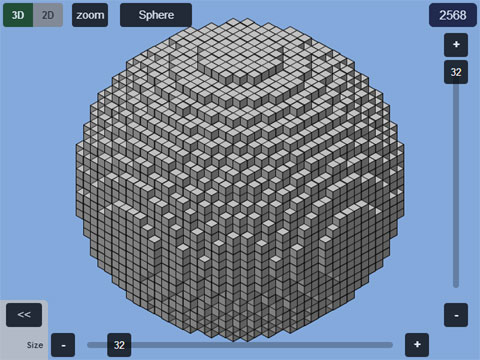 That’s a example if I were to create a 3d sphere model using threshold. Each boxes are pixel.

There is something more advanced in G’MIC, to convert volumetric images with dimensions w\times h\times d to a 3D mesh : command isosurface3d.
Example for a 3D sphere: 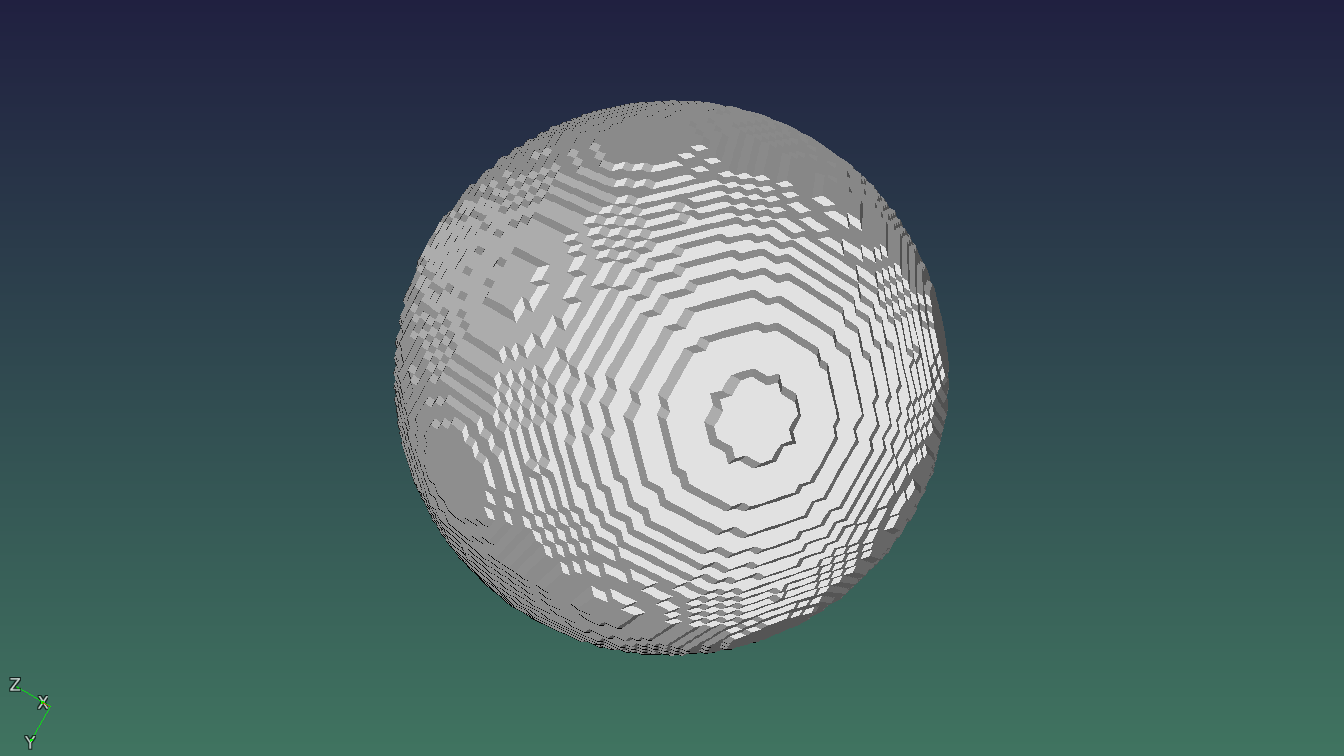 isosurface3d uses the well-known Marching Cubes method to extract a 3D surface from an isovalue in a volumetric image.

And if you blur the volumetric image a bit, you’ll get more smooth surfaces: 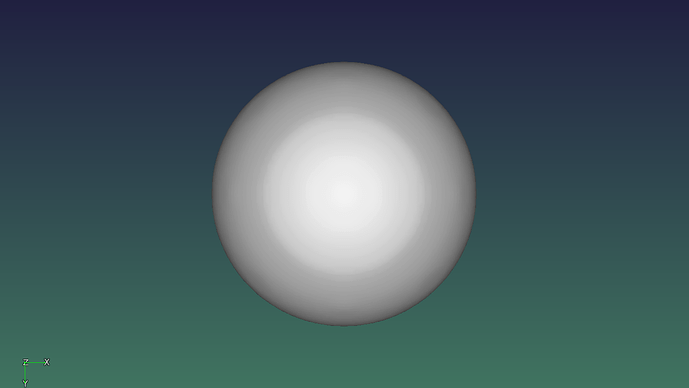 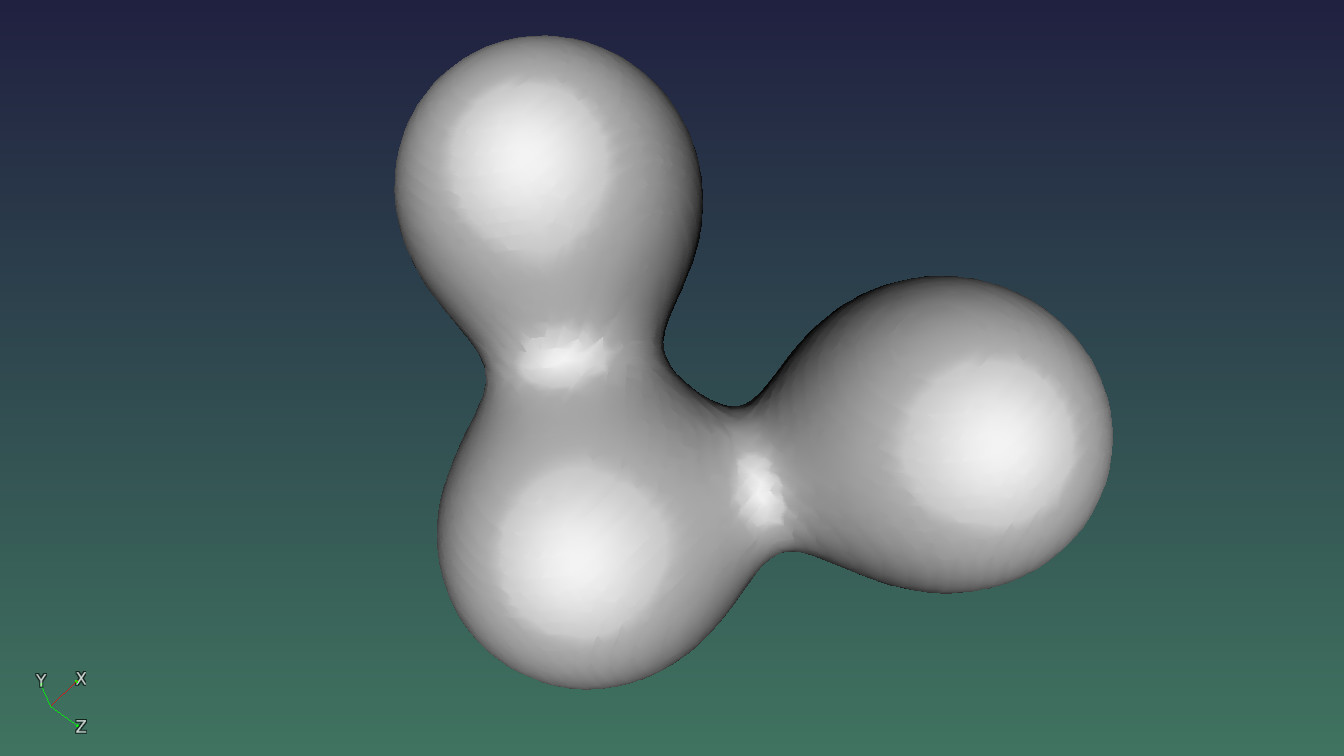 Now, I got another idea. rep_dla+skeleton+distance=fractal landscape. Brilliant idea and good for this, right? I should try multithreading rep_dla first though.

@myselfhimself, in current developpement branch of G’MIC 2.9.5, command elevation3d has been re-implemented as a custom command (rather than a native one as before).
It has a new option (second argument) to allow the generated 3D elevation to have a solid base , which is something you were looking for.

In your case, I guess that your elevation factor should be negative. Example:

If you want to test it, let me know if you get into troubles (or not

This is beautiful for adding floor thickness !!! Thank you for fiddling!!!
For my target application (mold negatives or positives for chocolate and pastry 3d printing or CNC machining) colors are not very important but it can be for other people. In such an application, the simplest similar tool name is lithophane http://3dp.rocks/lithophane/ , targetted at showing a picture trough light sub surface scattering, and is a technique fancied by many makers and DIYers.
Feel free to upload or send me a .obj of your mesh somewhere so that I can check its mesh for 3d printing.
I can also send your proper heightmaps with or without vacuum forming vents and various levels of “complexity” for my target application… I feel like you are doing free development for me…

Sorry just missed that message!! Let me try that out this week thanks!!! 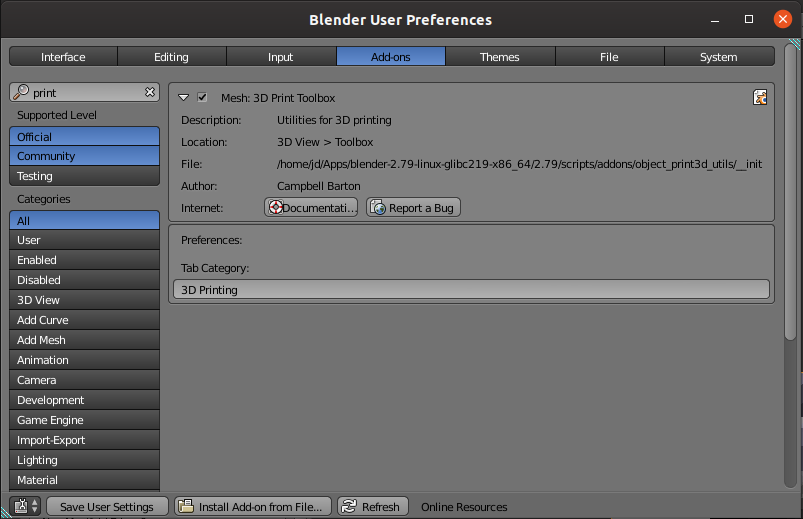 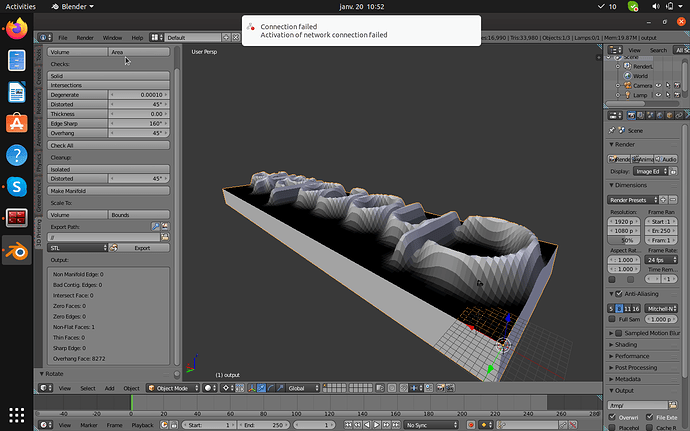 Generation was done with a locally built 2.9.5 prelease gmic-py

I can rotate the mesh 180 degrees on the x axis, the that the relief looks up on Blender’s z axis, and scale it 10x or 100x smaller so that it fits better on the scene workplane.

There is nothing non manifold, no double vertices, no holes, the non-flat face is here (enter edit mode (tab), face mode (ctrl+tab), click “Non flat face button” in the left pane to have it selected, then the “.” numpad key to focus on it) and nobody cares about it:

The overhang faces statistic is not important, when clicking the related button in Edit mode > Face mode, one sees they correspond to the bottom surface’s faces.

Despite applying a Shade smooth:

The mesh looks very non-smooth… because there are hundreds of materials assigned to it: 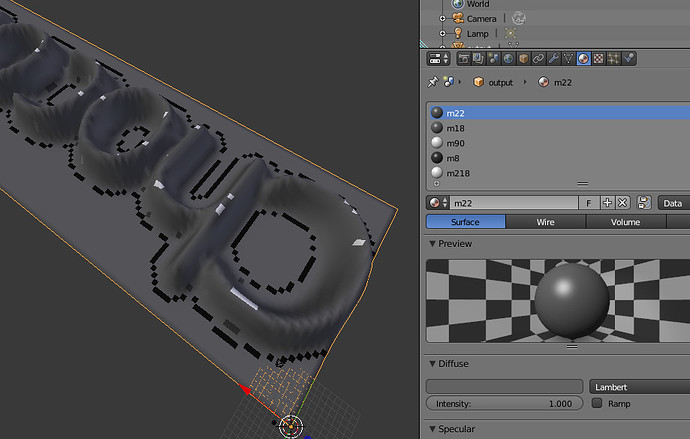 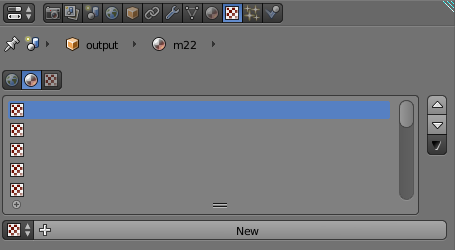 For video games (I worked on Half-Life mods when I was teenager), we would have 1 material per separatable 3d object and 1 or more textures per material. In the case of this low-relief, there could have been just 1 material and 1 UV mapped texture only.

Here is the mesh with a default smooth look after all materials removed: 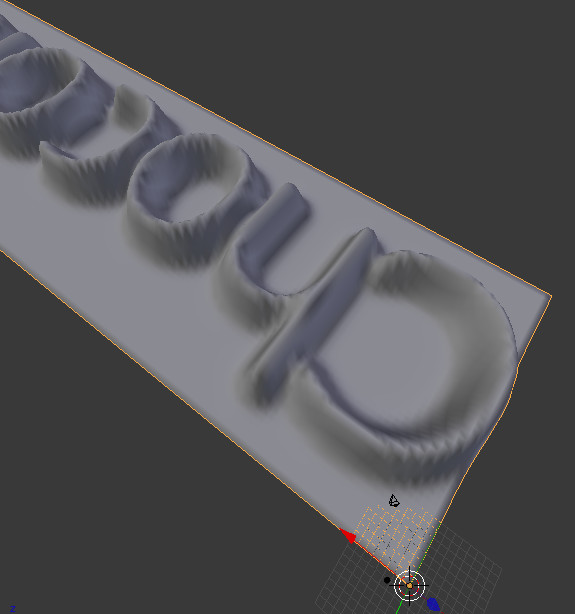 The fact that the mesh with duplicated faces/vertices is closed and looks good when smoothed just brings me to thank you very much David!!! This is enough for 3d print and CNC-ing makes want to write a Python example for gmic-py + flask for building up a custom online chocolate previewer before delivery some day !!

@myselfhimself, you can disable the automatic generation of materials by specifying 0 as an output option, when saving the .obj file :

This also generates smaller files, so useful if you don’t want to export G’MIC materials at all.

This is a question in the back of mind:

Is there a tutorial that introduce coding 3d objects in gmic? Vertices, faces, etc. All I know is isosurface3d which is useful for 3d fractal creation.