It looks like the next few weeks, if not months will involve a lot of staying at home. A good time to make some delicious cheesy garlic bread and try a bit of food photography.

One bit I always struggle when photographing food is controlling the highlights to make things look nice and moist but not greasy.

I somehow always end up with greasy. I assumed that this was because my light source was not big enough. I this case the light source (flash inside of a diffuser) was about as big as the entire scene and at camera level, yet it still looks really greasy to me.

I’d really appreciate suggestions on how to control this.

The only two tricks I see left is creating a lightsource covering almost a hemisphere around the subject using a umbrella (but that would then take away any directionality that is left) or to slap a polarizor on the lens to cut the reflections.

Oh, important constraint, the food needs to remain edible, no spraying matte lacquer over it. 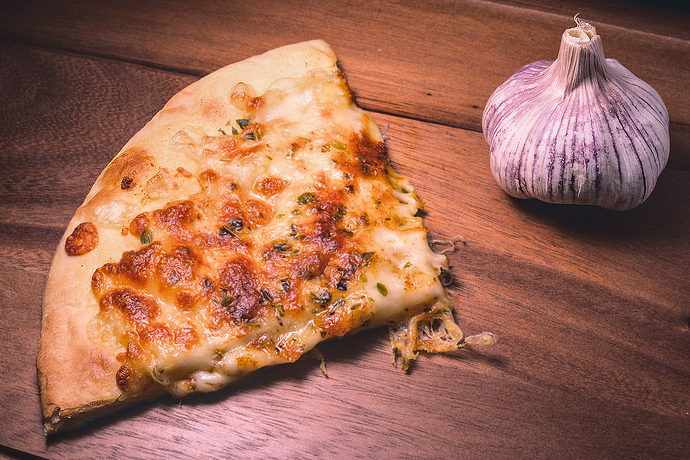 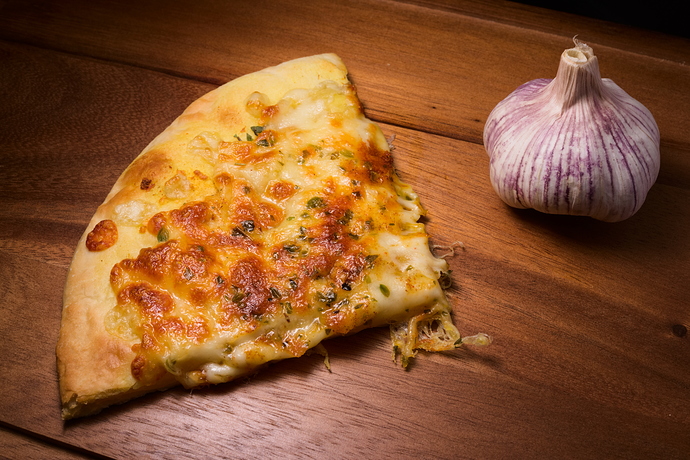 @Jonas_Wagner with “greasy” … do you mean you want to reduce the glare coming from the moist ? Did you try with a polarizing filter ? 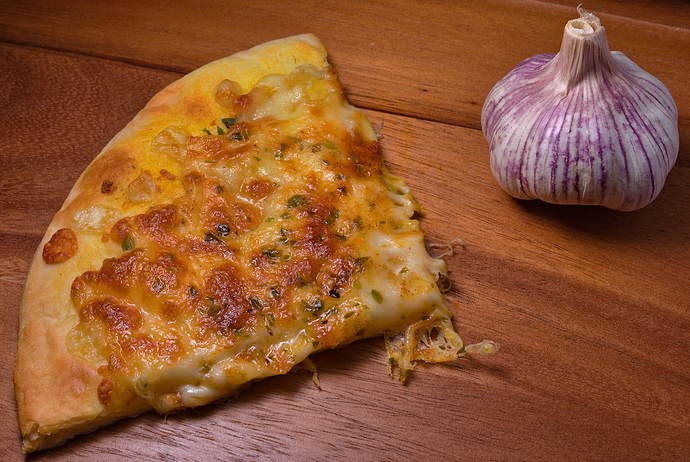 Polarizer would be a good idea.

One bit I always struggle when photographing food is controlling the highlights to make things look nice and moist but not greasy.

This is very good, though not free, reading
https://www.sciencedirect.com/book/9780240812250/light-science-and-magic

Polarizer would be a good idea.

Or two. One in front of the light source and one of front of the lens. Though removing all reflections would possibly not look good… 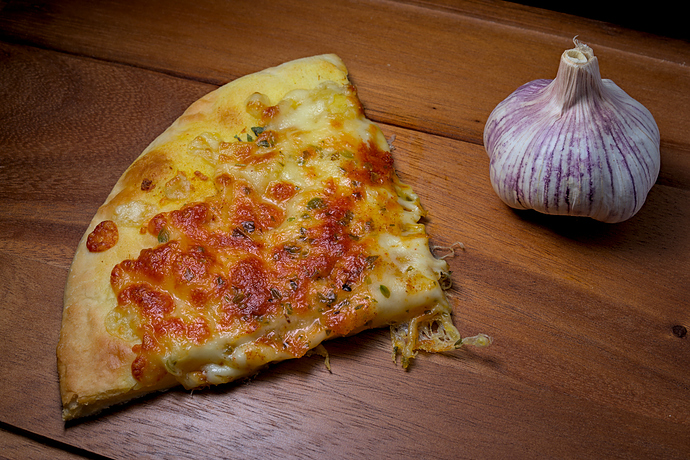 Sadly, that would only work well with flat subjects, as 3D subjects polarize light with different angles, depending on the incident angle of the light. In other words, with 2 polarizers you would be able to cancel reflections in some areas, but not in others, and in the end that would look odd.

In this scene it would probably work, as the slice of pizza is more or less flat, and the garlic is not shiny.

AFAIK, that kind of shots are quite difficult to shoot, because of reflections among other problems. That’s why in commercial photography they use all kind of substances to get the desired color and finish. Obviously, the resulting food is not edible at all.

To shot this, you will probably need a huge diffuser with quite a few strategically placed reflectors.

In microphotography (photomicrography, actually) it’s not unusual to explain the problem looking from the subject’s point of view: even if you see your diffuser big enough, when you look at it from the subjects position, it turns out to be really small (like the sun in the middle of the sky).

Anyway, I like the shot: it makes me hungry

Anyway, I like the shot: it makes me hungry 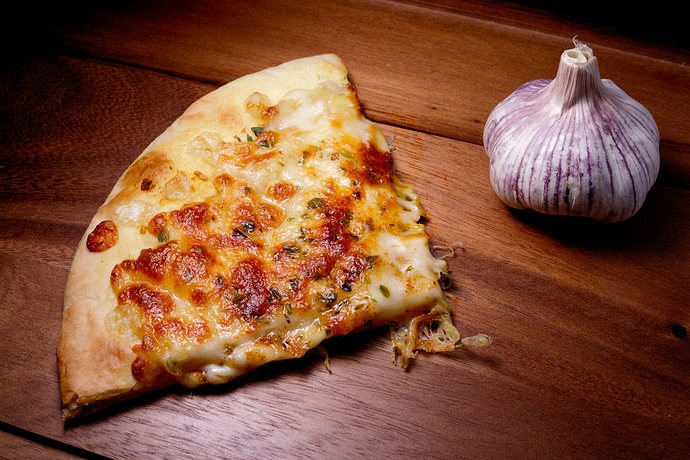 Nice garlic. What is it destined for? Part II?

Yummy. How come no one thought of bringing the bread closer! Also, induced some mystery around the garlic by using the graduated density filter to make it come out of shadows! RT 5.8
DSC_4920.jpg.out.pp3 (12.0 KB) 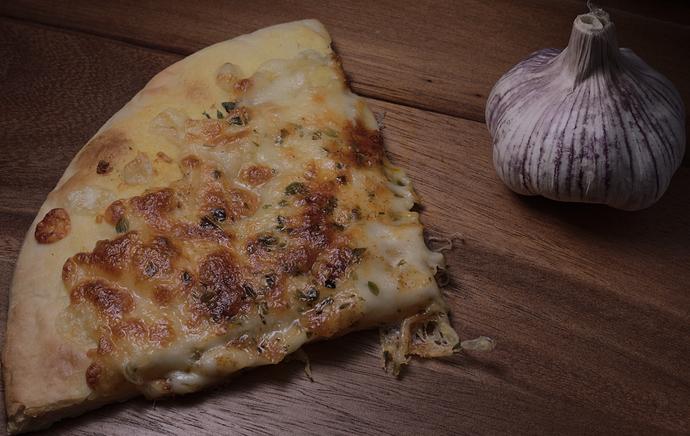 This looks so delicious, waiting for the recipe …

@sovereign Yes, that’s what I mean.

Regarding the polarizer suggestions, I generally don’t like the effect of polarizers too much because they often result in odd images (changing luminance in the sky, odd dependencies on the orientation of a surface, coatings etc). I guess in that case it could work. I’ll try to jerry rig the one polarizer I have in front of my macro lens to give it a try.

@heckflosse Thanks for the book recommendation, I’ve added it to my (admitedly too long) list of books to read.

@XavAL I’m a bit surprised that the light source was not big enough in that case. If I had to make a guess it should have covered at least a 90 degree cone.

@danny I really like the colors and contrast in your rendition.

@chris In short, make (or buy) your favorite pizza dough, make some fresh garlic butter (I like to add some salt, oregano, cayenne and tumeric to mine). Put the dough without garlic butter in the oven for a while, when it’s just about edible add the garlic butter, bake it a bit more. Before the garlic turns brown take it out and sprinkle it with a bit of mozzarella, the usually disgusting plasticy low moisture variant seems to work best. Back into the oven and if you are lucky enough the cheese will get a bit of color before the crust becomes to dark.

In retrospect I do wonder how much I could have improved this by just drying it a bit with a napkin. The other bit I want to try is separate backlight + fill, I should have the gear around but I mostly end up being to lazy and just go for an overhead light.

I guess there are worse fates than having to cook some more delicious food to experiment with (and eat).

I’m a bit surprised that the light source was not big enough in that case. If I had to make a guess it should have covered at least a 90 degree cone.

Sometimes 90-100º is not enough. Try with a light tent: if you only light it from one side, you’ll yet have directional light, but with a much more diffused light all around, helping to enhance details without too much reflections.

I actually found the issue now.

I use an off camera (ttl compatible) flash with the built in on camera flash set to command mode and off during the exposure. In theory the two should ‘communicate’ before the shutter opens, and only the off camera flash should be visible when it is open. In practice the on camera flash also fires during the exposure creating those nasty hard highlights. If I prevent the on camera (command) flash from being able to directly illuminate the subject the nasty highlights are gone. I guess either something is off with the camera or my cheapo yongnuo doesn’t implement the nikon protocol properly and is causing this (no ack?).

Boring default workflow of mine juxtaposed with tasty bread and garlic. PhotoFlow+G’MIC. 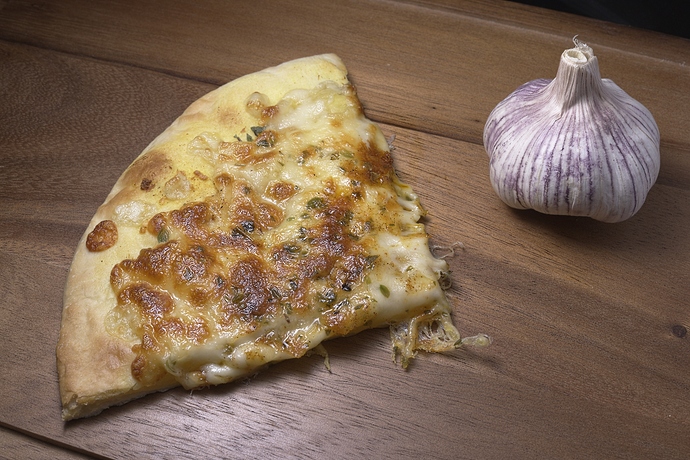 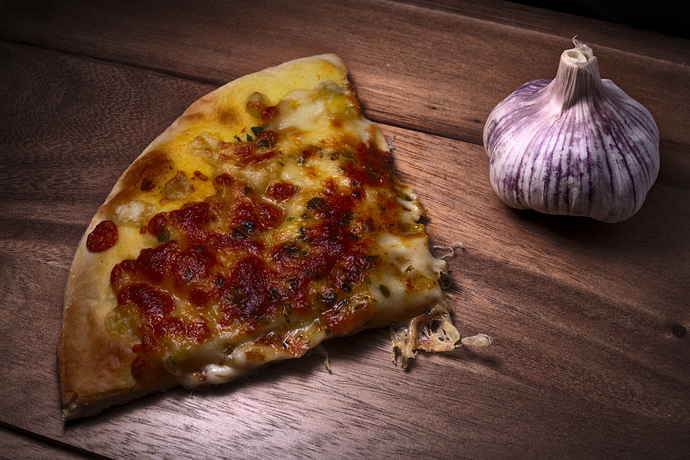 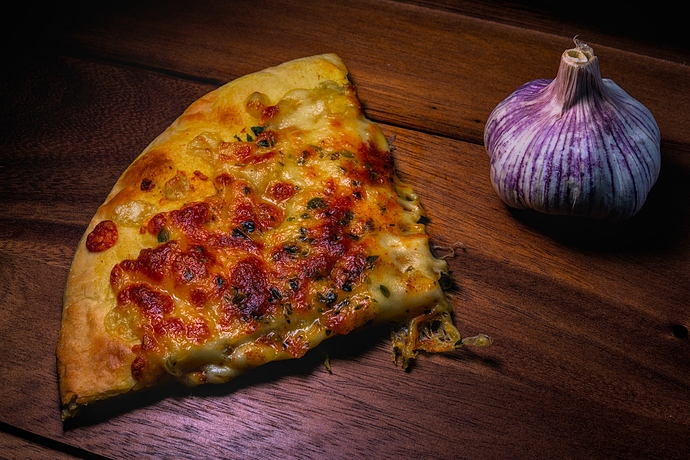 I don’t think it looks too shiny, though Filmulator definitely tempers the “greasy” look.

The only change was giving it +2 EV of exposure compensation. Everything else is default. 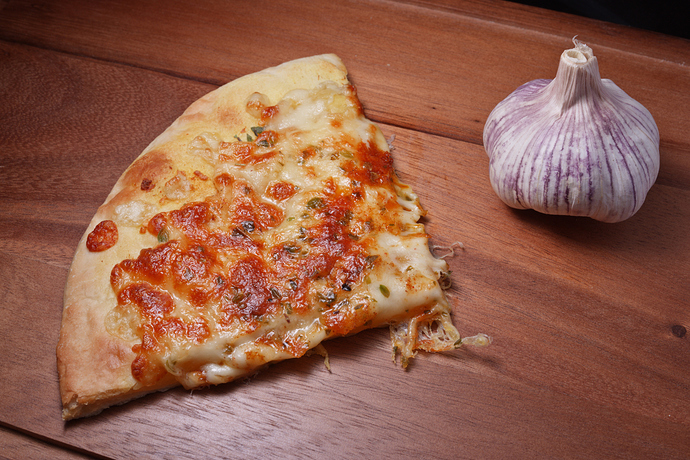