I have had mixed results with capturing GPX traces using my phone and attempting to marry up the locations in darktable. At one time, if the GPX track were in the folder before I attempted import, darktable would automatically geotag the images on import. Unfortunately More recently, despite clock synching, darktable cannot find a match in the GPX track, either automatically on import, or manually later on.

After dithering for a while I bought a hardware tagger that works beautifully with both my cameras (Nikon D3300 and D7200). Moreover the setting of the camera clock via GPS will avoid any drift.

For those who want to know, the third-party device I bought was this one. Initial GPS lock took some 90 seconds. I’m not sure whether lock will always take that long.

For a modest price, I am very happy. YMMV. 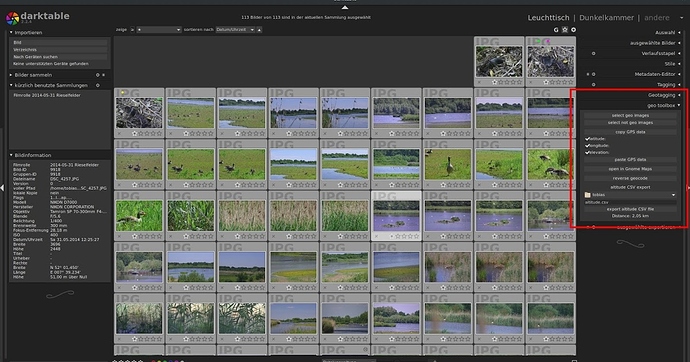 Last year I blogged about the KML and the geoJSON export scripts for darktable . I've wrote an other script for darktable, th...

Some years ago I bought for my nikon camearas a hardware tagger (I think it was a Nikon one, but I don’t remember that was not satisfying for two reasons:

From then, I use my iphone to record GPS with a specific SW. Be careful as all smartphones are not equal regarding GPS quality .
There is no need to manually synch the cameras that becomes painful if you want use a few cameras (yours, wife’s, friend’s) or you go through time zones.

Regretfully, this GPS4CAM SW is no longer maintained. I wish this could be implemented in a FOSS SW.

After that, showing location of photo on map is the (easy) work of a photo viewer.

Be careful as all smartphones are not equal regarding GPS quality .

What do you mean by that?

More precisely, for instance, what about the Galaxy A71 which I might decide to buy some time in the future…
It has:
A-GPS + GLONASS+ BeiDou + Galileo

Btw, I have read you can buy a supplementary hardware (antenna) to improve the precision of your smartphone - tablets as regards the gps tracking. This addition may be particulary useful with tablets, more suited to install some GIS softwares (e.g. Geopaparazzi or Qfield, both for Android…).

When I made tests,about five years ago, I had an iphone 6 I think and my wife a high end samsung, surely a S6. I made in summer some tests, travelling by car and walking. After drawing the gpx track of each on map, definitely, the Iphone had a better GPS. It was much better to follow small streets in town (It was Florence).
I cannot help you for GPS comparison of modern smartphones and furthermore in conjonction with GIS. Regretfully this feature is never analysed in revues.

the Iphone had a better GPS. It was much better to follow small streets in town (It was Florence).

Better GPS or just better in tracking because of better knowledge about location of WIFI hotspots?

About 10 years ago, I used a gps tracker size of 1/3 of a cigarette box. It’s only function was to record coordinates in a kml-file. It was powered by two AAA-monocells and I had to charge them every day. But it just worked fine and accurate.

Thanks, @Tobias. I noted those at the time and have your geoToolbox enabled in my darkroom view. To be honest, my most-used function is the “select geo images” or “select non-geo images.” Copying and pasting GPS data is useful and works well, but my difficulty is a bit of a chicken and egg situation: to tag a new image I need to copy the location from a previous image at the same location. If I was last at that location some weeks or months in the past, can I remember exactly when?

This is why, absent specific embedded geolocation (or darktable being able to apply my GPX track), I end up using the presets I have stored in “find location” in map view. I remember asking for the ability to store presets as a feature request (see this thread), and was thrilled at how quickly it was implemented.

@gaaned92, thanks for the caveats. I haven’t used mine enough to evaluate how much it drains the camera battery, however I have only once found myself needing to ration battery-life - when I was on a 5-day overseas trip and left the charger at home. As for loss of signal and the like, I am quite reconciled to the performance that goes with paying < USD 50. If I had bought a genuine Nikon product (not available anymore, but priced at least 4 times as much when they were) I would expect much better; yet the reviews I have read (including yours above) suggest that this is one instance where Nikon put their name on something shoddy.

It is true not all smartphones are created equal; and not all IT behemoths lock you in to the same degree of privacy invasion. Nevertheless, I have found that A-GPS only on a Samsung handset is woefull in terms of continuous location - impossible to use a drive-navigation ap with. Allowing Google to use wifi as well and selling my digital soul to them is the only way I have found to get reasonable (but still sometimes spectacularly wrong) location data. The most significant errors can be down to people moving house and Google insisting that the wifi with certain MAC address is in the previous location. This happened to me for months after moving at the end of last year - Google kept insisting I was at my old home whenever it synched with my home wifi.

I don’t see my new hardware toy as a geo-location panacea, more as part of my toolbox. Some cameras have built in geo-tagging - i.e. our smartphones, if we enable it. For those that do not (my 2 DSLRs), I am glad of some, albeit imperfect, functionality. YMMV.

I cannot help you for GPS comparison of modern smartphones

Sure. No problem at all!
I am a phytopathologist by trade and I am also very far from being an expert on this topic

I am oriented to buy a Samsung Galaxy A71 for several reasons:

As regards the GPS topic of this post, at work, I often relate with Agronomists who take data in the field and collect the samples we analyze in our laboratory as phytopathologists.
They all work with Android tablets with the software Qfield [1], which is excellent if you also use QGIS [2] as a “desktop software”.
From their GPS reviews they are quite satisfied of the duo Android tablets + Qfield.
Of course the problem is the battery duration and the precision of the gps data which, especially in the Alps mountains, can be difficult to obtain.
Needless to say, you also need a huge amount of Internet band to download all these GIS data from Internet while working in the field all day long…

BTW, from what I have gathered, some of these agronomists have purchased an extra antenna (hardware) which is attached to their tablets, in order to improve the precision of the gps points.

In the past, these same agronomists all worked with Garmin gps devices (Etrex etc) but in their opinions, for the vast majority of their present work, an Android tablet is usually enough for GIS related stuff (plus, you only need to carry a single device…)