It is me or is guide and sample point usage a bit of a hidden feature. Without looking at the manual, I wouldn’t know how to access them (and I regularly forget how because I don’t always use them). Especially for sample points: every time I update GIMP (portable), I have to remember to find the menu to activate the dialog and then press CTRL while dragging them out from the ruler.

I wonder if they could be more accessible… Not a big deal but would be nice.

Well, another problem is that sample points are limited to just four ones. This feature just never got enough dev attention (and I never wrote the spec for a functional update, my bad).

I also had trouble locating the Sample Points dialog - after using GIMP-2.9 for maybe two years, I was still grumbling to myself about “why doesn’t GIMP have Sample Points”. I was about to file a bug report requesting same, but fortunately thought to ask another person if they were already available “somewhere”, which of course they were. Oddly enough, that other person was looking for some other feature, which also turned out to already be available. And we both learned that consulting the manual can be very helpful.

Regarding the number of Sample Points, already in GIMP-2.9 (I don’t know about 2.8) one can add more than four sample points to the image window, but only four are displayed in the Sample Points dialog.

@prokoudine - would adding more Sample Points to the dialog be as simple as adding additional replications of existing code? Well, also provision for a vertical scrollbar would be needed. I did a quick code search, but couldn’t find the actual code for the Sample Points dialog, that somehow limits the number of points to 4.

@Elle, personally I think the layout could be improved so much that we could avoid the vertical scrollbar in many real life scenarios even with 10 sample points.

Here is a quick and dirty mockup of what I’m talking about: 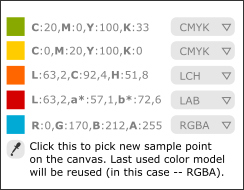 New row (color patch, values, color model) would be added to the bottom every time you pick a sample point.

As shown in the mockup, this would mean sacrificing the Alpha Channel and xy coordinates information, unless perhaps that information could be included as “on-hover” info?

Or you can hardcode displaying A next to any color model values (I just used RGBA for convenience or, more likely, lazyness).

XY – not sure how useful it is. But if the point is to know where each patch is on the canvas, you could just highlight it on the canvas when you hover the color patch in the dialog.

Displaying A next to all the color models seems like a good idea. Though I’m not sure if this makes any sense when the user is asking for the merged color instead of the color for a single layer - I don’t have much experience actually using alpha channels other than layer masks which apparently are a type of alpha channel.

About the XY coordinates, sometimes it’s not easy to locate sample points on the canvas, so “on hover/highlight” might be a solution to that problem.

Are there other use cases for knowing the exact XY coordinates of sample points?

@prokoudine @Elle Just decided to make a post of it now lol. I have similar thoughts and ideas. Maybe if we had a sample tool, we could simply tab through the points, moving them into view if we are zoomed in.

@afre, good point. There was also a feature request for a Count tool that would be very much like Sample Points tool. It just wouldn’t care about colors, only X,Y positions and numbers