Chatting a bit with mitch and pippin from the GIMP team yesterday, they convinced me that porting the current version of the G’MIC plug-in for GIMP 2.9 could be something possible, and even not too complicated. So I gave a try.
And it seems to work

The plug-in was already working for GIMP 2.9, but without the support of high-bit depth images (16bits or 32bits/channels). Now, the latest version on the git repository should be able to get/set image data from/to GIMP while keeping the value precision (and not shrinking the pixel values to 8bits as before).

If you are using GIMP 2.9 (so the development version), and are interested by a high-bit depth support in the G’MIC plug-in, then maybe you could help to test the current plug-in code, and give feedbacks ?
This is for “advanced” users, because you’ll have to compile the G’MIC plug-in by yourself (which is actually quite easy on Linux, but probably a pain on Windows

). Here are the steps for the Linux users (esp. Ubuntu in this case):

You should not see any big differences with the "usual’ version (hopefully), but now you’ll be able to apply all G’MIC filters using high precision modes.

Do not hesitate to try and give me feedback so I can improve the plug-in code if necessary. 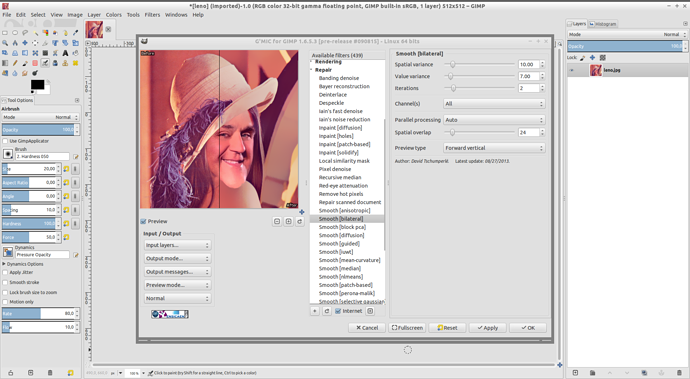 Oh man, this is awesome! Thanks for this David!

Actually, we should thank mitch and pippin from the GIMP team, who bore my awful and trivial questions on irc

Looks like it is working great now, so I’m happy, it didn’t take a long time to make this happen.

Did you try the sudo apt-get build-dep gimp that @Dave_Jones suggested above? (Hoping that solves the problem).

Yes, i tried that.

I would suggest installing the libgimp2.0-dev package then.

I got it working.

For Fedora 22 I installed:

After that ‘make gimp’ runs without errors except some warnings on deprecater gimp functions.

Of course, @partha has already gotten things bundled up on the windows side… So check out his site to pick up one of his 2.9 builds…

Hello all, I installed the latest version of the GMIC plugin to my gimp 2.9 install using the instructions posted here, but after moving gmic-gimp to the plug-ins directory and starting gimp, I got this message:

Could not execute plug-in “gmic_gimp”
(/home/jzzz/.gimp-2.9/plug-ins/gmic_gimp)
because it uses an obsolete version of the plug-in protocol

Any help will be appreciated! thanks, John

Which OS are you using, and which instructions did you follow exactly?
Where did you get your 2.9 GIMP from? Did you compile it yourself, or did someone provide binaries?

Pat, thanks for the response…

I’m using Linux (Mint Debian); I compiled Gimp 2.9 myself, following the instructions given here (“What to do under Debian”):

same issue here:
Could not execute plug-in “gmic_gimp”
(/home/martin/.config/GIMP/2.9/plug-ins/gmic_gimp)
because it uses an obsolete version of the plug-in protocol.

Since 2012, the gimp development branch support 16 bit images. The following tutorial explains hows how to compile gimp in 10 minutes for Linux Mint Debian Edition 2. Chances are it works for other debian based distributions as well.The tutorial is...

jgschaefer: Did you succeed with your setup?

does anyone have an update on this topic?

Were you not able to get it running yet?

I can fire up a VM and try to follow the steps to help troubleshoot if you want.

ok, got it running, Problem with GMIC plug-in for Gimp 2.9 pointed me in the right direction.
If you are running gimp from the distribution and your own compiled version in parallel you need to set the LD_LIBRARY_PATH accordingly.

I created a short summary at https://opensource.photography/content/compiling-gmic-linux-mint-debian-edition-2 including back links to pixls.us.

@David_Tschumperle: I hope it’s ok to reuse your mascot as teaser image