This one has been on my mind for some time, and I guess if it keeps gnawing somewhere in my brain I need to figure it out

Can some of you help me on my way - or help me, period - to figure out what Nik Color Efex ‘Skylight’ filter is doing?

I use if often on series of batch images that have a bit of ‘dirty’ warmth to them. By fixing the yellow cast but then adding this ‘skylight’ filter (which doesn’t just add yellow everywhere the same amount) it seems to clean up the colors a lot while still keeping warm tone.

I thought I was close lately by using a ‘Reflect’ blend-mode with a luma-mask and the color of a warming gel/filter, but it’s not as clean as this filter does

Of course, there are a lot of people that might not use Nik’s suite or even the Skylight filter in it, and have no interest in it. I thought I add three hald cluts, in not too big a resolution. One with the effect applied for the full 100%, one at 50% and one at the (default usage) 20%. The effect is applied / meant for regular sRGB pictures.

From playing with a color sampler in before/after shots, I don’t see a real pattern yet in RGB / CMYK modes. I also tried in lab, but apart from an increase in the L channel I don’t see much repeatable (sometimes the a channel increases, sometimes it doesn’t, same for b channel, etc…).

Does someone have some tricks, methods or insights in how to figure out what is being done here?

Does it do something other than swap colours? If so, then LUTs won’t completely address the processing.

Oh, good point. From looking at it, it’s just color/lightness. I see no changes to local contrast or anything like that.

Also, trying the lut out on pictures and comparing the same picture with the Nik filter seem identical (at least so far).

Maybe ignore the filter then, and just change the question to ‘help me figure out what this lut does’. Because I think there is a formula to it (Well, more than one probably).

Filter shifts red towards orange and adds a little orange to the highlights. The slider controls the saturation and a little brightening of highlights.

Tried on the fly with the darktable: 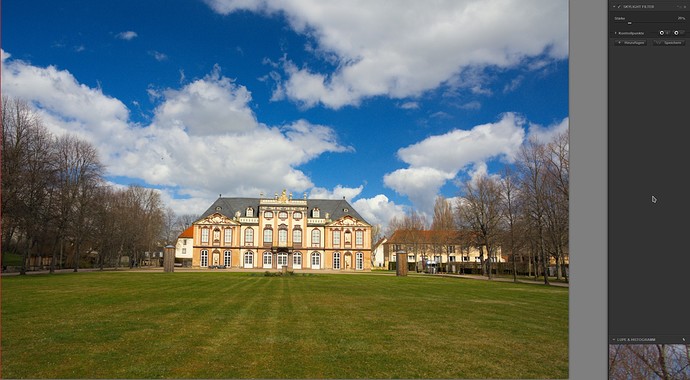 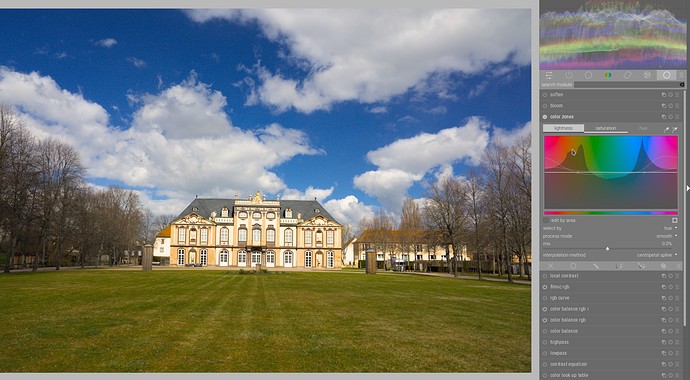 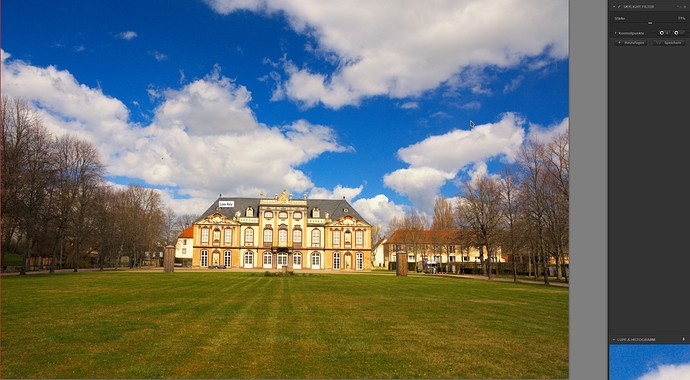 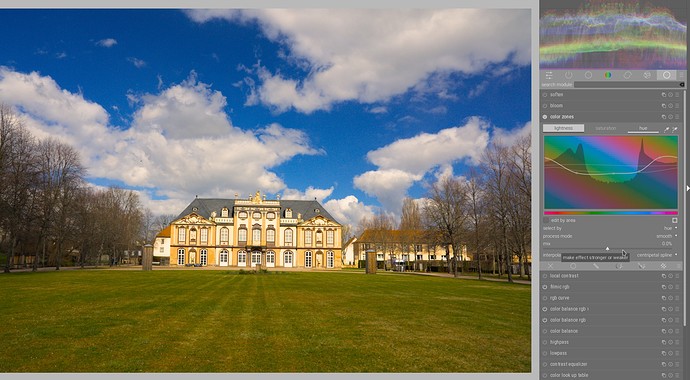 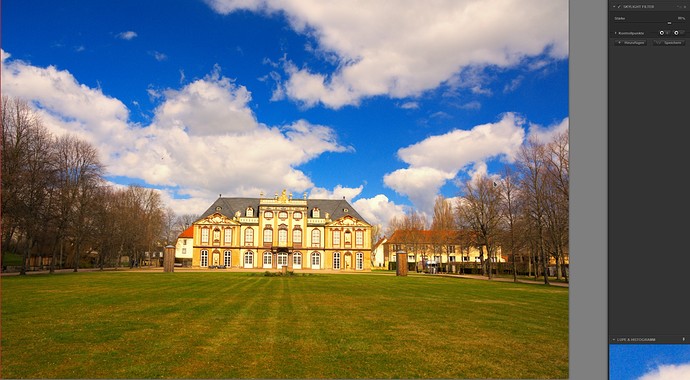 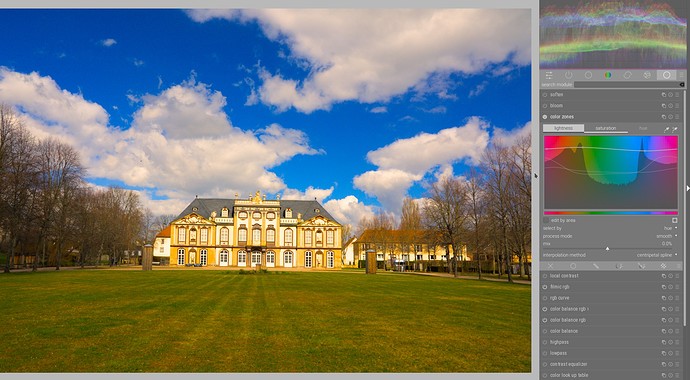 In darktable I used color balance (highlights gain) for coloring the highlights with orange and for color shift color zones module.

From what I’ve seen the slider just is a ‘overal effect strength’.
As in, if I add the filter with the slider at 100% on a separate layer, then set that layer to 20% opacity, it has the same effect as directly applying the filter with 20%.

From looking at the differences between the 3 hald luts (and the baseline version with magick hald:4) it seems red stays red, but just saturated. At 100% even so much that it ‘clips’ the saturation in HSL.

But I see parts where the L (of HSL) part increases, but other parts where it decreases. ??

I also used imagemagick to convert the 100% lut to HSB, extract the ‘S’ channel and display it, compared to the baseline hald. The block in the complete top-left, is pure black, has 0% saturation and stays 0% saturation. But there are other blocks which start at 0% saturation but end up with a bit of saturation.

Or maybe I’ve been measures the patches wrong … it’s late, I should get some sleep

I forget but shouldn’t it be at least hald:8?

Hald:4 is a cube with 16 elements along each edge, so it is enough to get an idea of the overall effect.

Look at the means and standard deviations (SD), the numbers in parentheses which are on a scale 0 to 1. Compare those with unprocessed hald:4, which has mean 0.5 and SD 0.307356.

So all channels have larger SD, which suggests an increased contrast. The red channel mean is much larger (lighter). Green is slightly larger, and blue is slightly lower.

x.png has relative colours. Where it is gray(50%), there is no change. Where it is red, nik100.png makes colours redder, and so on. When we display both images expanded to fill the screen, flickering between them, x.png shows what changes and hald:4 shows where it changes. I see two overall effects: (1) increased saturation and (2) a small shift towards red.

EDIT to add: if you want to simplify nik100.png to a simple formula, I suggest you look at G’MIC which has processing for (almost exactly) that.

The haldcluts add a warm tint to grayscale images so there is at least one rgb adjustment, raised saturation , less in reds and more in blues/greens and a hue shift, mostly in blue hues

I made linear gradient images on which I did the filter / hald. This makes my head still scratch on what it is exactly they are doing. ‘Pushing towards red in the highlights and adding saturation + brightness’ gets very close, but it still doesn’t match when looking at test images 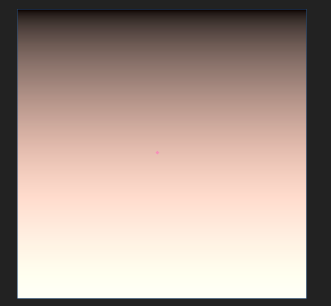 So a simple equation that ‘adds red, removes blue’ doesn’t seem to be the way here. Because then pure-blue colors would also be affected, which the filter is not doing.

But then only in the shadows + midtones, the hues are pushed towards red.
And, the further away the color is from red, the less the hue-shift is.
As in, only the colors on the right side of this color-wheel seem to be hue-shifted: 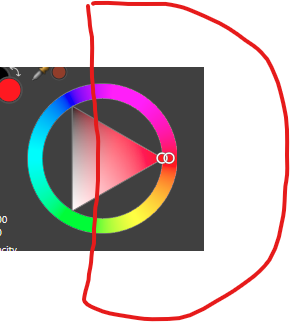 Because yellow and orange are clearly affected, magenta is a bit, but blue/cyan/green are not or hardly at all.