How to batch rename burst photos in the correct order?

Hi, i’ve been trying to rename photos that are taken in burst of 10 or more in a second…so, the problem is that the software to rename only gives me up to seconds to rename by default, and there’s an option to rename in secuence, but when they are in the same second…it renames them in an awkard order, i mean, what i really see in the secuence is something like: 1,2,5,6,7,3,9,4,8 or something like that, so it’s no useful

…and here is the link of the photos, it’s a jump and you can see the secuence makes no sense :S 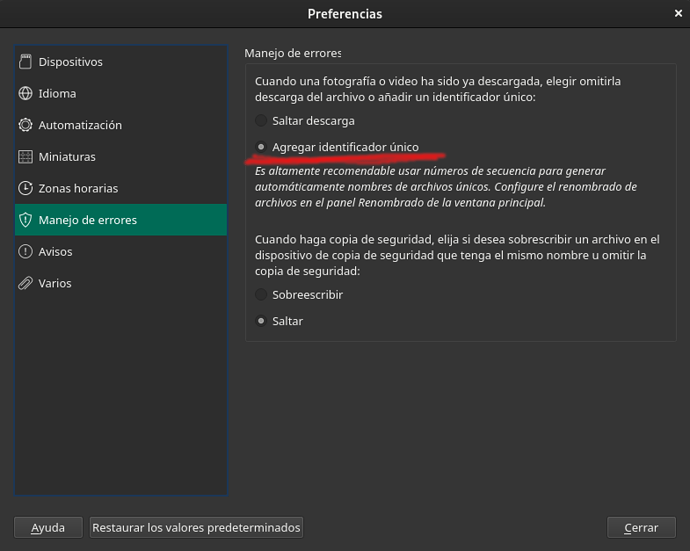 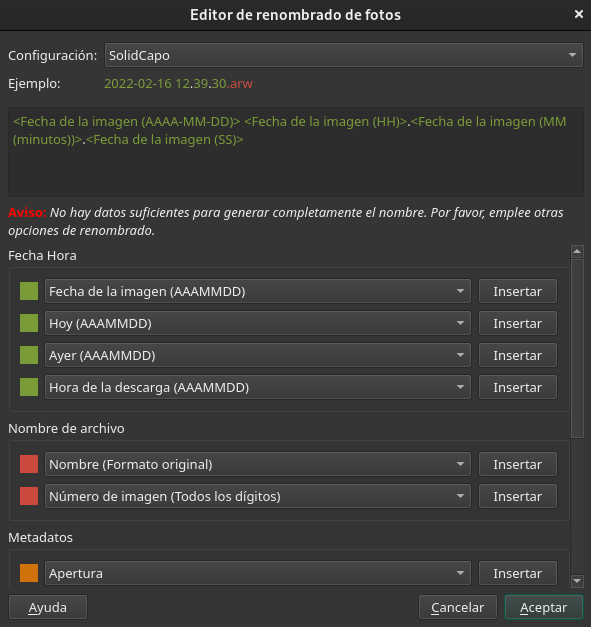 Any help would be awesome!

PS: and also, it crashes when renaming, it stays always in 99% saying that there’s only a few seconds left and never finishes 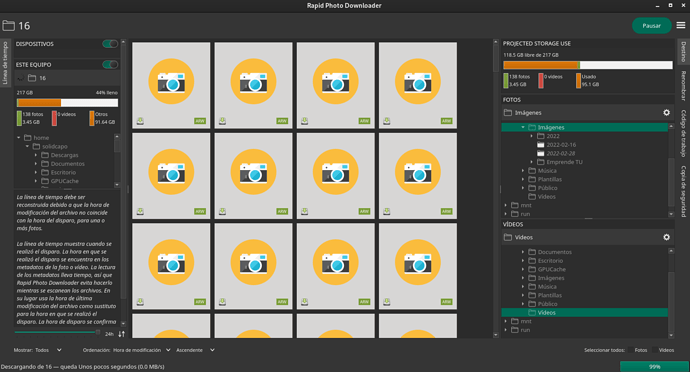 You want unique file names with that scheme on a camera that can shoot many frames per second?

This is the first problem. You need a better renaming scheme, and if you don’t use a better one there is not much that can be done to help. You should:

Now, if your camera writes files to the memory card file system out of sequence, e.g. photos taken earlier are written later, then sequence numbers will be out of order, because Rapid Photo Downloader sorts file downloads by file modification time. I do not have your camera. I do not know if that is what your camera does. You need to tell me by browsing the files on the camera and checking their file modification time and confirming if they are written to the card in order or out of order. Uploading them to google drive will not help.

Regarding file renaming not finishing, it’s is impossible to know what is going on with a proper bug report. Perhaps exiv2 is having problems with your files? I don’t know. It’s possible if you are running an old distro with an old version of exiv2. With modern cameras you need a new distro, not an old one.

WOAAAHHH…firstable, CONGRATS and i’m big fan of what you’re doing with this software and as a photographer

And about the problem, i’m using a Sony Aplha 6000, it takes 11 per second. And the naming convention is what you see in this image, and they’re in the correct order:

The problem is when it’s renamed

and i asume it’s because several photos are with the same time, and then, don’t know what does it take into account to add the serial number, cause its when it makes the error.

Anyway, you left me also thinking, which distro do you use or recommend? i’m new on this and the friend who helped me said that the Arch arquitecture is always up to date, although, i’ve found several complications over Ubuntu for example. Another friend suggested me Ubuntu Studio.

Perhaps not totally relevant to this thread, as it is not about the excellent Rapid Photo Downloader.

I use exiftool to handle this as follows:

which appends a sequence number to the date and camera model, if pictures are within the same second of each other.

If the names of the files are in the correct order in the camera (DSC1206, DSC1207, etc.) you can add this number to the RPD pattern. For example, my standard pattern is:

I also use the method above . File name is date and time based but with the last three numbers of the original filename added before the file type suffix.

You can do whatever you want. Practices and habits vary. But if you want unique, meaningful file names, you must change your naming convention.

Some people like to use the file name number the camera generated as part of the new file name, out of convenience or because it has a special attachment to them. In the final analysis however it is a meaningless number. It just just a number. Use the camera enough, and it will repeat again and again, meaning you have multiple source files named (for example) “DSC1213.ARW”, when means you will have multiple files named “xxxx-1213.ARW” etc. I suppose it works good enough for some people, and more power to them. It’s up to them. However, I find it inelegant and unnecessary.

Ultimately, as I tried to explain above, you have two reasonable choices:

You can go with (1) if you want to gamble that now and in the future, your photos will include subsecond metadata that a tool like exiv2 can understand. Personally I think this is risky because it is not an EXIF standard and consequently support for it varies widely. It cannot be relied on. It is not the fault of the exiv2 or ExifTool developers. It is the fault of the camera manufacturers.

So that leaves (2). Personally I have been using sequence numbers since 2007, when I first wrote Rapid Photo Downloader. They work. When used with date time, they make locating a unique file super quick and easy.

However, as I stated above, using sequence numbers could cause problems if the camera writes files to the memory card out of sequence, i.e. newer files are written before older files. That is, a file A taken earlier than file B has a file modification time that is later. Not good.

Your camera is relatively not new, so any modern distro should work just fine. However I still recommend against using a distro older than 2020. I have seen too many problems with older distros, causing exiv2 to crash, which causes Rapid Photo Downloader to crash in turn.

Thank you, but i’d rather have all solved directly on the app for a cleaner pipeline

Thanks for the example, it made me think on how to change my naming convention

Ok, thanks for taking the time to explain all this, i added the image number at the end and worked perfectly for the renaming part

Now, i’ll put the info for the bug that won’t let the photo jobs done, they stay on 95-99% and have to close and reopen the app everytime. So, let me know what else do i need to do.

PS: don’t understand why you say Manjaro is an old distribution, it’s pretty updated in all the apps i think, or is it because it’s an Arch based distro? should i use ubuntu studio better?

I didn’t say Manjaro is old; I didn’t know what distro you are using. Manjaro is generally fine, if it meets your needs. It is certainly much better than running a distro from 2018!

Please open an account in GitHub if you don’t have one, and file a bug report there: https://github.com/damonlynch/rapid-photo-downloader/issues

However, as I stated above, using sequence numbers could cause problems if the camera writes files to the memory card out of sequence, i.e. newer files are written before older files.

I saw some strangeness with out of order files thats why I adopted using part of the original sequence nr in combination with date-time. Ensures unique filenames.

Strange to consider the camera writing in messed up order but its probably what happened.

Yeap, had to use the image numbers as well too

I use this formatting (but haven’t been able to achieve it in RPD):

How do you structure all your photos? Lounge

For anyone interested in these matters I recommend https://www.dpbestflow.org/ It’s a bit dated but there’s a lot of good thoughts. They have a page on directory structure and one on file naming. Originals/2021/20211221/20211221_214600_00.DNG for raw files dating back to 2001. My first few years I used jobcodes in the day directory names, then I scratched it because it didn’t work (for me). I can shoot a myriad of different things in a day and descriptional metadata fits better in the original…

I use this formatting (but haven’t been able to achieve it in RPD):

which part of their scheme?

How do you structure all your photos?

Ah yes. As we discussed last year, if you follow their suggestion and use sequence numbers then making your file names end with _nn is unnecessary.

I should add though that I am not opposed to including being able to generate such a naming scheme in Rapid Photo Downloader. It is just that it is a (very) low priority compared to more pressing tasks.

I understand that and at the same time I would really appreciate if it showed up in a future version.