How to clean blotchy high-iso sky?

I have finally caught the comet Neowise, after days of the overcast sky. However, due to light pollution and very faint visibility of the comet, I had to use very high ISO - 32000.

While I ended up catching it, I got some nasty blotchy sky in Darktable. 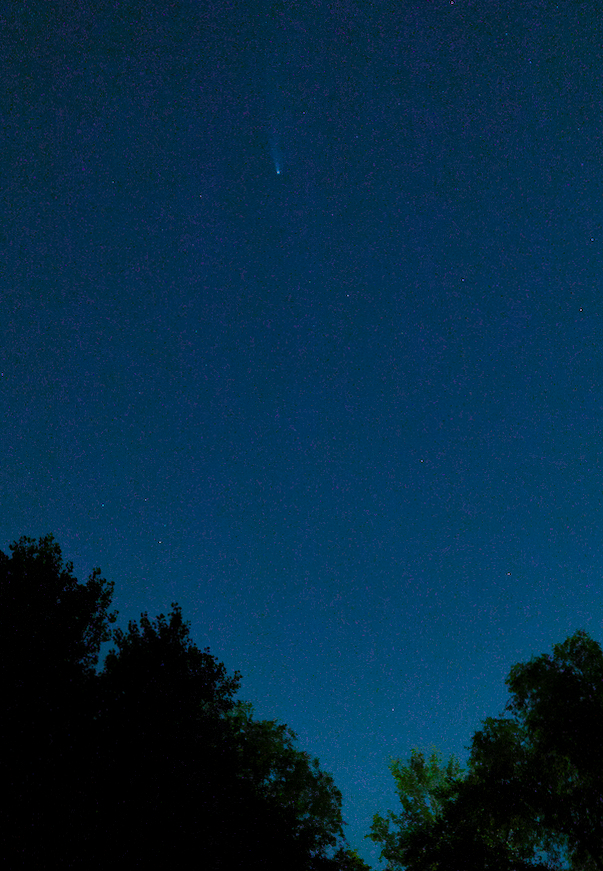 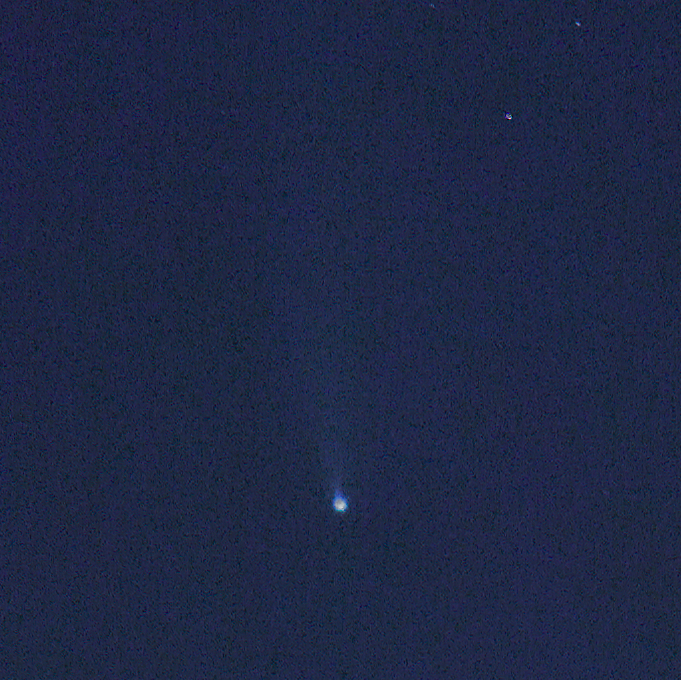 This is the best I came up with in terms of noise. However, magenta/green blotches are still visible. RT does the job better, but since I prefer DT’s workflow, can anyone point me in the right direction?

What modules are best to clean blotchy sky due to high iso? What do you use? Do you colorize the sky to even the discoloration? If so, which one?

What modules did you use and with what parameters?
For the blotchy sky (as well as chroma noise), I would increase the scattering parameter (if you use non-local means in denoise profile). The slider can take big values when entered using right-clic + keyboard.

Here’s what I used:

Oh wow, I didn’t know for the right-click+keyboard!! Thanks will try it.

You should probably increase the patch size as well

The only problem with that is that trees get so messed up… probably would need to make a good mask.

I know the charter of the thread is to help you post-process the image you captured, but I want to point out that the noise in the sky isn’t about the ISO, it’s about the amount of light you captured. Without knowing your other parameters, I’d guess you cranked up the ISO to make the shutter speed acceptable (hand-held?), and 1/30sec for instance isn’t really a lot of time for capturing faint light of the night sky.

Decreasing your shutter speed, more light-on-sensor, is the first order of business to clean up the sky. Food-for-thought for your next outing…

Turn off Sharpen or at least use a mask to exclude the sky.

Decreasing your shutter speed, more light-on-sensor, is the first order of business to clean up the sky. Food-for-thought for your next outing…

You’re absolutely right, though camera specs/parametres weren’t the best on my side.

In order to catch the invisible comet (it was so faint, I had to REALLY stare into the dark to see it as a tiny cloudy spot and only knew where to look because of astro-software I took with me) I had to use the biggest lens I had in my disposal - Canon 105mm f2.8.
Now, f2.8 isn’t bad by any means, but it’s not the brightest for starry night.
The air was hazy and light pollution on that low angle was big. Going under 1/5 and the light pollution was getting out of control, while my comet’s brightness remained almost the same.

The biggest obstacle was my tiny tripod that just couldn’t handle this lens, so was used more as a monopod. Anything under half a sec was out of the question.

All in all, I hope the air will be more dry next time and I will carry some real, heavy duty tripod with me.

I have a Canon, albeit the lowest end, old and dinged. Anything higher than 800 is a no-no. Anything 400-800 is only tolerable. Your camera is likely magnitudes better. High ISO images are hard to repair, esp. in your case where you have to worry about not decimating your subjects: the stars and comet.

My suggestion is to aim to photograph the night sky at a lower-than-you-are-comfortable ISO and then boost the signal in post. Perhaps take multiple frames to see where your camera’s and lens’ sweet spots are in terms of settings. A good tripod and locking the mirror may help, though the latter may cause problems when you are using a tripod at the same time (for certain cameras)…

Good luck on your next attempt!

Ah, the skies have been overcast for so long in my area. I haven’t caught a glimpse of the comet yet!

To add to @paperdigits’s recommendation about sharpening, try using the deblur presets of the contrast equalizer module. I’ve generally found I can do some fairly aggressive sharpening with them without introducing too much additional noise.

In your case I’d just use the “denoise (bilateral filter)” module and adjust the sliders to the point where you are comfortable with the result, possibly set the blend mode to color and adjust the opacity to let just a little bit of noise through to make it look a bit more natural.

If you want more control you could use the wavelet mode of denoise profiled.

At least from my experience non local means is not that well suited to deal with smooth surfaces as it ‘tries to find structure’ within the image. If there is nothing there it just makes things up.

I shoot m43 so I know the noise battle. This method isn’t ideal but I find it can help some if other denoise options haven’t been successful.
Using the lowpass module set a radius of 15-20 and use blend mode “lab a channel” then a 2nd instance but blend mode “lab b channel.”