I have no clue how channel mixer works

Although I have watched several times videos from Boris and Bruce and a read the darktable user manual I still struggle with the understanding of the channel mixer.
I made a very simple R, G, B png image (picture 1)
If I move the “input G” slider in the the “R tab” to the right, the green area turns into brown and in the histogram a red pin appears (picture 2). Why does red appear in a pure green field? Is this a png issue, or am I…?

Thx for your valuable answers 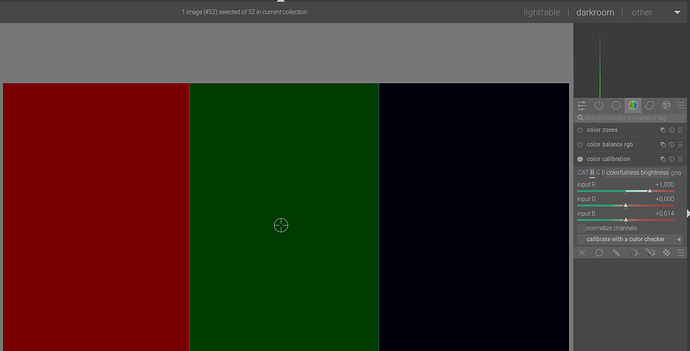 @tstoddard - don’t get too caught up in the idea of color models/spaces just yet. It can be counter-intuitive to wrap your head around but at the end of the day the biggest things to keep in mind is adjusting each channel in the mixer (red, green, or blue) will only adjust how “bright” that particular color is. You won’t be adding any other colors into the mix. The channel mixer only let’s you adjust how intense that particular color is. Hopefully I can clear this up. Let’s consider four…

thx for the document. It supports my understanding, but makes my shown experiment even harder to explain.
br
christoph

The way I’ve thought of it (and I’m sure there are many ways to visualize / conceptualize it) is the channel mixer determines the “purity” of each output channel’s color. If you have a pixel that’s 100% R, 100% B and 100% G, it’s white. If it’s 100% R, 100% B and 0% G, it’s magenta. But if the red channel has been adjusted to now contain some other input color in addition to red, then it’s skewed and the final color will shift.

In other words, the output channels are “conduits” through which theoretically a percentage of pure R, G and B will “flow” (per conduit). But the channel mixer can “pollute” each output channel by de-purifying a color though the addition of other colors. So while the percentage of “red” might not change, its inherent “redness” might, which will affect the final color.

Someone please correct me… I know it’s coming. LOL

I just think of them as simple multipliers… You are going to enhance red with + values and decrease it with - ones for the red output channel… the extent to which that happens and the resulting color will rely on the values of the pixel so pixels with a large blue number will add more red to the final pixel value than ones with less blue when you bump the blue slider and the same for green, and well red in the red output channel is pretty obvious… i guess whatever way you think about it to understand it…

Make sure you enable color calibration with the basic channer mixer preset: 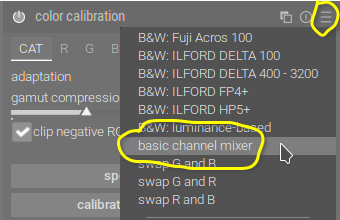 or that the CAT tab is set to adaptation: none (bypass) (basic channel mixer has it set up like that):

Otherwise, if I remember correctly, you won’t be mixing R, G, B, but components from some other colour space.

The channel mixer mixes the channels and not the colors.
It’s just a matrix multiplication.
(Rout, Gout, Bout) = M *(Rin, Gin,Bin) for each pixel

Note:What I dont know is in what color space it is applied : working space or output space.

Thx to all of you for your very supportive explanations. I think I got it.
Maybe it would be helpful for my brain, if the channel mixer UI looked a little bit like the matrix equation. Meaning: the R, G, B tabs as lines instead of columns, and the input sliders in columns instead of lines. But not sure if this makes sense.

You can find many tutorials on channel mixer in various software, because it’s the same in all tools (Gimp, Photoshop and so on).

Look at youtube InAffinity for Affinity Photo - channel mixer. There are few videos