Leaves in May image

“Leave in May” by Elle Stone is a wonderful example of digital painting. I wonder if she can elaborate on the techniques and processes that were used to create that work.

You can “@” mention her to get her attention here on the forum. @Elle can you elaborate a bit on your methods for the image?

Perhaps she can post it or a link to it too.

Dean, thanks! for the compliment. “Leaves in May” isn’t actually a painting, but rather an illustration-style rendering of a photograph, made using GIMP-CCE. The basic procedure for making images like this is something I’ve been experimenting with for a while now. Starting preferably from a scene-referred rendition of a camera raw file:

The “complicated” parts are the details, as there are a million ways to convert to black and white, simplify details, find edges, add color, and modify tonality. If there is any interest I could write up a short tutorial for pixls.us.

Memories of woodblock prints and fairy tale illustrations are no doubt the motivating factor in my exploration of “What can you do with the “find edges” algorithms”. When I first posted “Leaves in May” to my website (there’s a larger version here: http://ninedegreesbelow.com/galleries/pictures-201504-through-201607.html), a friend commented that it reminded him of Japanese art. I think he might have been thinking about Japanese woodblock prints, as many of my favorite artists and illustrators were influenced by Japanese woodblock prints, including Arthur Rackham. “Leaves in May” sort of reminds me of the branches in Rackham’s “Feeling very undancey indeed” (http://artsycraftsy.com/rackham/ppk45_undancey.jpg) from Peter Pan in Kensington Gardens (Peter Pan in Kensington Gardens by J. M. Barrie - Free Ebook).

The “complicated” parts are the details,

I mean the details of the individual steps in the processing. Simplifying the details is pretty simple!

I would be interested in a tutorial. That way I can learn the basic steps from beginning to end. Then I would have a starting point from where I could branch out. @Elle

I would be interested in a tutorial. That way I can learn the basic steps from beginning to end. Then I would have a starting point from where I could branch out.

Just to let you know, I’m putting a tutorial together, working on it right now actually. The hard part was figuring out exactly what I did step by step, by-passing the detours that my “not very linear” approach to editing usually involves.

My apologies for the delay - it always takes me longer to write a tutorial than I think it will. But here’s the link: http://ninedegreesbelow.com/photography/leaves-in-may-illustration-from-photograph.html

As you might expect from someone with a website devoted to color management and photography, the tutorial does go into the “color management/color mixing/color science” aspects of making an illustration from a photograph. Hopefully I didn’t go overboard, but of course you can just skip over the relevant sentences! Anyway, questions and suggestion for improving the tutorial are very welcome.

FWIW, making the illustration involves first making a line drawing, so the tutorial is actually two tutorials in one.

I said somewhere in these forums recently what great things appear, and here is another one! Thanks for writing the tutorial. A lot of the technicalities are beyond me, such as “preferred linear gamma RGB working space” and “perceptually uniform”. How did you learn about these details, and colour-space theory etc? Is there a text book you’d mention perhaps?

I had a go at photo → line drawing some years ago, using “find edges” in Photoshop, and coincidentally with a 400D. It’s hardly fine art like yours but here we go:- 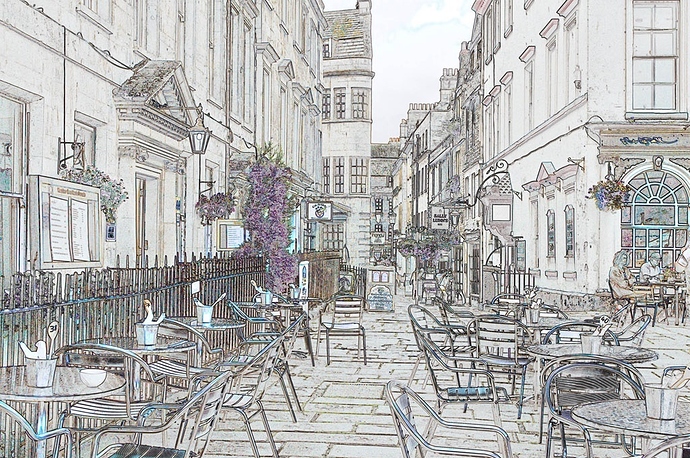 I said somewhere in these forums recently what great things appear, and here is another one! Thanks for writing the tutorial. A lot of the technicalities are beyond me, such as “preferred linear gamma RGB working space” and “perceptually uniform”. How did you learn about these details, and colour-space theory etc? Is there a text book you’d mention perhaps?

Hi Andrew,
When I switched from Windows and PhotoShop to Linux and free software, I already knew a little bit about color management (trying to make a good monitor profile and experimenting with linear gamma image editing), and the switch forced me to start learning more. I saw questions on color management posted to various free software user forums and tried to help with answers, which led to my website. Contributing to GIMP development produced a lot of questions that needed answering. So I suppose the answer to “how did I learn” is “a little bit at a time while trying to answer my own and other people’s questions.”

I don’t think there is a text book that focuses on creative and applied use of color management/color science/color mixing. But I’m working on writing one. In the meantime, the articles in Sections A and D3 of http://ninedegreesbelow.com/photography/articles.html provide a sort of crash course in color management/color science, and the GIMP tutorials try to weave theory and practice together.

I had a go at photo -> line drawing some years ago, using “find edges” in Photoshop, and coincidentally with a 400D. It’s hardly fine art like yours but here we go:-

I’m blushing that anyone would refer to anything I’ve done as fine art. I like your line drawing quite a lot - it shows a delicate and convincing handling of lines and colors, not to mention the subject and composition are very nice. Was the photograph by any chance taken in Italy somewhere?

Sounds right.
About the interpolation, I mean.
But where does the 30MB come from?

Sounds right.About the interpolation, I mean.But where does the 30MB come from?

Hmm, upon reflection 30 megapixels is just me applying the wrong analogy. Foveon/sigma says each site is actually 3 sites, one each for red, green, and blue, which turns 10 megapixels into 30 megapixels. But removing the color filters on a 10megapixel normal sensor would just produce a very sharp 10megapixel camera, with no smearing of information across multiple sites from interpolation. Thanks! for catching and correcting my sideways thinking on this matter.

Also your ISO would treble, I think.

Also your ISO would treble, I think.

I’m not sure how one would calculate how much the sensitivity of the sensor would increase, but without those lens caps more light would reach the sites. I hadn’t thought about that, but a higher iso would be pretty nice!

Except you have to remember that the meter will be mis-calibrated (I think), so you’ll need a permanent negative exposure compensation as your starting point.

@Elle, I had a bit of a look at those pointers to your website, and I’m really interested in following this up. The processing looks so much better in the gamma=1 world. How can you argue against this example of yours? : - 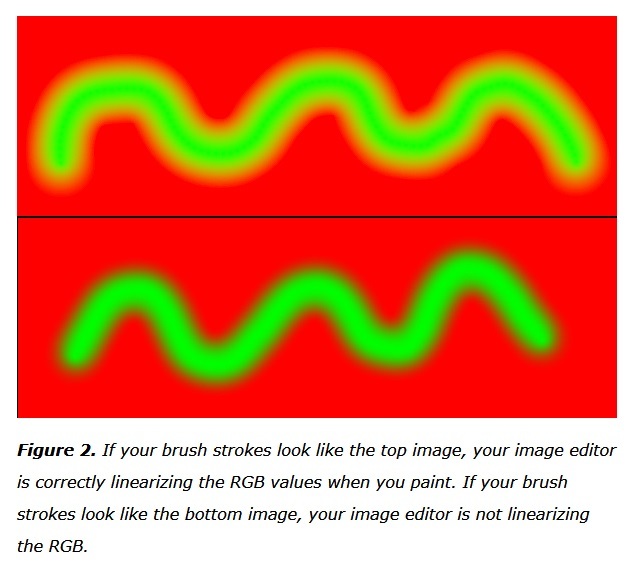 I meant to get a Linux box and Gimp going this year but it hasn’t happened, I will try in the new year with Gimp CCE and RT. Calling RT experts, @ilias_giarimis, @Morgan_Hardwood, @patdavid, and more, does RT make adjustments with linear RGB “behind the scenes”? I’m now aware it can output with a gamma 1 profile. Why is there no gamma 1 working space? (No doubt a good reason…!, just curious)

My pic was not Italy, rather Bath, England. But Bath was and is very much a Roman city. Sorry if the “fine art” was embarrassing! - but that’s how it appeared to me. And thanks for your comments!

@Elle, I had a bit of a look at those pointers to your website, and I’m really interested in following this up. The processing looks so much better in the gamma=1 world. How can you argue against this example of yours? : -

@RawConvert , I think many people who look at the images like the ones in http://ninedegreesbelow.com/photography/linear-gamma-blur-normal-blend.html and
PIXLS.US - Users Guide to High Bit Depth GIMP 2.9.2, Part 2
will immediately conclude that mixing colors using linear gamma RGB is exactly the way to go. And many people aren’t the least bit impressed.

The first time I saw a gradient drawn from green to red using a linear gamma vs a perceptually uniform RGB color space, it seemed obvious that a gradient from green to red should go through yellow instead of brown. So I spent some time researching the matter and comparing my own editing results using linear vs perceptually uniform RGB, and then switched to a linear gamma workflow. 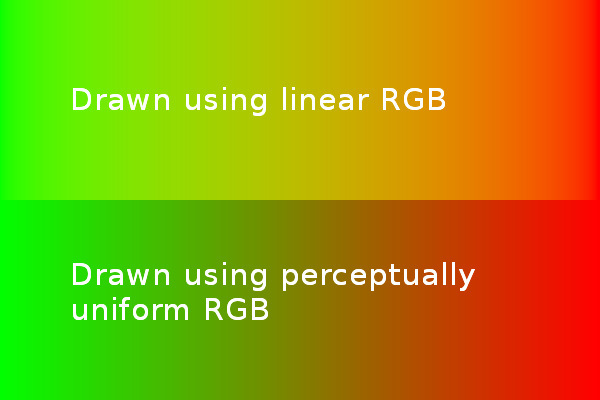 Back when digital image editing first started, computers simply were not fast enough and also didn’t have enough RAM to support high bit depth editing, and 8-bit editing in a linear gamma color space produces severe shadow posterization. The people doing 3D rendering using perceptually uniform RGB quickly realized their results were beset with “gamma” artifacts and came up with all kinds of workarounds to remedy the situation. But as soon as computers got a little bit more powerful, software for 3D rendering very quickly switched to a linear gamma workflow.

For some reason photographers and painters have been much slower to make the switch. For a very long time photographers who admitted to using a linear gamma workflow were actually subjected to ridicule in various user forums, and this bias that “nobody needs to use linear RGB” still persists. On the other hand, today the Krita devs actively encourage painting in linear gamma color spaces, and based on reading the Krita forums some artists do now paint exclusively in linear gamma color spaces.

I don’t think switching to a linear gamma workflow will make anyone’s work magically better. But speaking for myself, I find it easier to produce results that I like when working in linear gamma color spaces.