Lensfun - Not finding the right lens

what would be helpful

Follow this Lens Recognition in Exiv2 v026 (and later) - Exiv2

The reason I haven’t used that feature it that the lens recognised is 300/2.8L IS USM without teleconverter 1.4 III.

I will play around with the settings. I also own teleconverter 1.4 II to try. Didn’t have any problem with 1.4 II before so I shouldn’t have it now either. 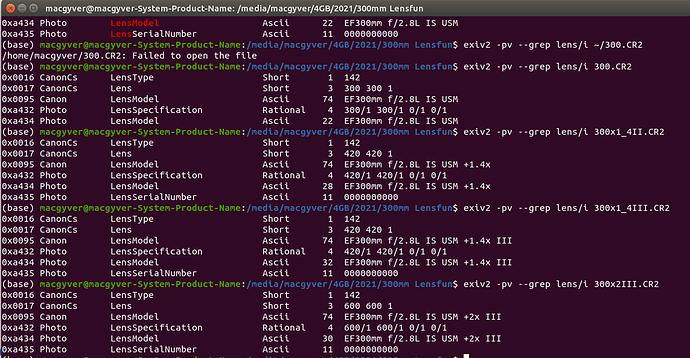 x1.4 II and x2 III worked before but now none of the three converters are identified.

If your lens names are not matching, the correct fix is to use a ~/.exiv2 file to map the correct name to your lens.

Changing the name in lensfun means it’ll get over written the next time lensfun updates.

In this case it will be me who sends the data to Lensfun. If it doesnt work for me it will not work for others. If this would be about another lens already in Lensfun, then .exiv2 would be the best solution for just me.

With that said my biggest issue is still that I can get one of the four combinations to work, but not four.

One step closer. I forgot to type extender in the model place in the xml file. Still not working.

If you use the .exiv2 file you can just make the name match whatever lensfun has.

Even extenders? LensID is the same for all four combinations.

You can’t match on the same thing, so find the teleconverter tag and match on that

Any idea about how to match? Haven’t found any more details about /.exiv2 than 142=single lens without extender

The raw files to try on are published above.

I go back to this thread when I’m having issues: Can't locate ~/.exiv2 file - Exiv2

Nothing new there. Try yourself with my raw files. The issue here is extenders. Not a single lens. A single lens is easy and that is what you have been linking to all the time.

It seems .exiv2 is not created for a lens with different extenders so the walk around most be something else. Why, for example, is not darktable reading the tags LensModel? A bug?

Tried with my 200/2.8L IS USM II. It works differently. LensType changes with the extender. Well, not for +1.4II and +1.4III. It means that it in this case would be possible to use .exiv2 to point it right, but only to choose one +1.4

I understand your frustration, but its really the fault of the manufacturers. Someone beat you by ~3 years: Wrongly identified Canon 2x extender as 1.4x extender with Tamron lens