The Call for Sessions is open for LGM and accepting submissions.

We (PIXLS) have presented every year to give a status update on the community and what we’ve been up to. I encourage every project here to consider giving an update on their status and what they’ve been up to this past (two!) years.

I’ll be putting a submission in to talk about the community here and the cool stuff that’s been going on (so if you have something you really want to make sure I mention please don’t hesitate to mention it here in this thread).

Any interest in G’MIC-related stuffs? Not sure what we could do about it.

Let’s talk about this at the next live meeting (March 28).
Who is even allowed to enter France? Is it necessary to go to quarataine for 14 days before the meeting? Is it possible to stay at a hotel? Is the meeting a professional or a touristic event? And for whom? How much does a Corona test cost in Rennes?
Who knows what?
Well… I would like to come but I am almost certain that I won’t get a vaccine anytime soon and I cannot afford to stay in quarataine at a hotel for 28 days.
But there might be some who already had their vaccine, e.g. those who work as teachers or at universities, or maybe US citizens or people form Israel.
Btw, I think it would be wiser to reschedule the meeting to August or September.

I am too far and poor to attend the meeting but I agree that a later date would be prudent.

[My country has ordered the most vaccines of any country but is disappointingly much slower than most because we depend on other countries to manufacture them (and because of woeful incompetence).]

Not sure what we could do about it.

Recent developments with python and 8bf are notable; would interest folks.

I am too far and poor to attend the meeting but I agree that a later date would be prudent.

I believe it’ll be live streamed again this year. Problem last year was that the streams started at like 2AM PST

I don’t plan to go there, but I did reached out to @InkLab to see if there would be presentation on a new openraster format. Out of scope for this thread, there really needs to be a updated openraster format spec.

Hello @Reptorian , I didn’t seem to find any specific direct messages from you regarding this topic but I would be happy to discuss it. My most recent experimentation has revolved around using exclusively GLSL based shaders to describe all modes / filters, because at last year’s “after meeting meeting” with Boud and the Gimp developers, this was seen as a “potentially promising, but some proof of concept needed” route for development.

I would be happy to discuss this offline if you would like me to specifically bring some of your ideas up for discussion at this meeting or the next.

I sent a message in krita-artists.

I can’t really discuss it offline. However, what I can do is add to discussions about how the ORA format should go, but I do think that you do have the basics already set. You’re welcome to start a new thread here and elsewhere about the current format, and show us your draft.

@Reptorian, Thanks, I will look over there too and refresh my memory, sometimes there are simply too many communication services to keep track of. >.>

To summarize, we briefly touched on a large number of topics during the last meeting, but due to some post-meeting feedback, I got the impression that the discussion was either too rushed by the one hour time limit, or I tried to cover too many topics. (Some people were dissatisfied with how little time was spend on certain topics, and I’m relatively inexperienced running large meetings)

Due to this, I’ve mostly focused on just the one discussion topic, which was a little more esoteric, just to generate ideas. I’ve been making most of my development on it in this branch: https://gitlab.com/inklabapp/jsora/-/tree/webgl-renderer/ , but there is no official spec yet, mainly because it is just a proof of concept. I can make a thread here specifically about this topic, but I wanted to remind that this feature was just one of many others discussed during the meeting which needed to be decided upon. I’m not sure if anyone else kept notes during that meeting, I can check if I had left anything notable on my old slide deck.

I will make a new thread here soon about the aforementioned specific development separately.

Are there any people here who have the intention and possibility to go to the physical LGM2021?

Could this be relevant?

EDIT: Won’t be able to attend finally. We have a very busy period in the laboratory in the coming months.

Well, I am again wondering: should I submit a proposal for a (online) software demo (workshop?) - if it’s not already too late. My idea is this: developing one and the same landscape capture with several different softwares (darktable, RawTherapee, ART, Lightzone, maybe Photoflow, too), as well as demostrating different approaches, editing techniques, interpretations and workflows, kind of like: what is possible with open source photography software or a live PlayRaw. I would be happy if it were technically possible that other people participate, I think the organizers say that it won’t be exactly like last year. But I don’t expect or require it.
I would definitely go to the real physical event if I could. I am not sure about the online event, because it’s not like I have nothing else to do. Should I rather save the idea for the next real event, whenever that will be?
One year ago we could not imagine that this situtation will continue for such a long time… and that people won’t be able to come to the meeting… 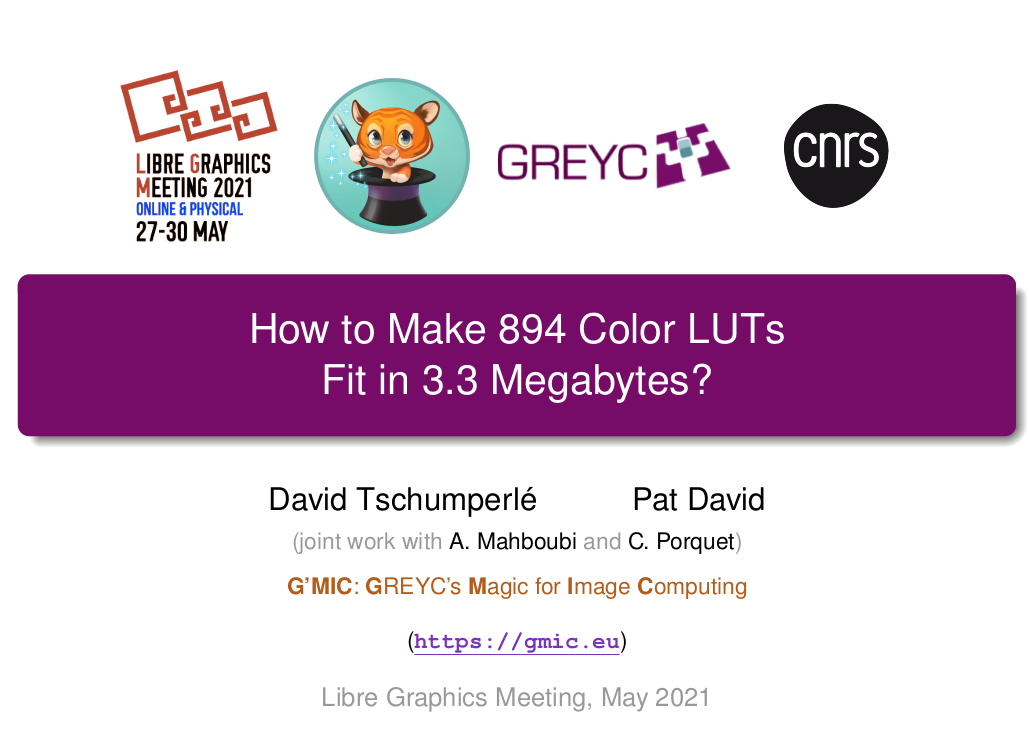