M31 Andromeda - why is Siril making it appear mauve-brown?

Back in September, I spent three nights capturing data on the Andromeda Galaxy on my QHY294C OSC from a Bortle 4 site. I ended up with about 14h worth of data from 5’ exposures.

After pre-processing (flat dark, flat, dark) and stacking in Siril, I then applied photometric colour correction and … it came out mauve-brown. Now I had been using a CLS filter, which I probably shouldn’t have been using. So I chalked the outcome to having used that.

Earlier this month, I tried again, but due to sundry technical issues and clouds, I only ended up with an hour’s worth of usable data. Nevertheless, an hour is an hour and something respectable should come out of it. So off I went and … got basically the same results as with the CLS filter attached: 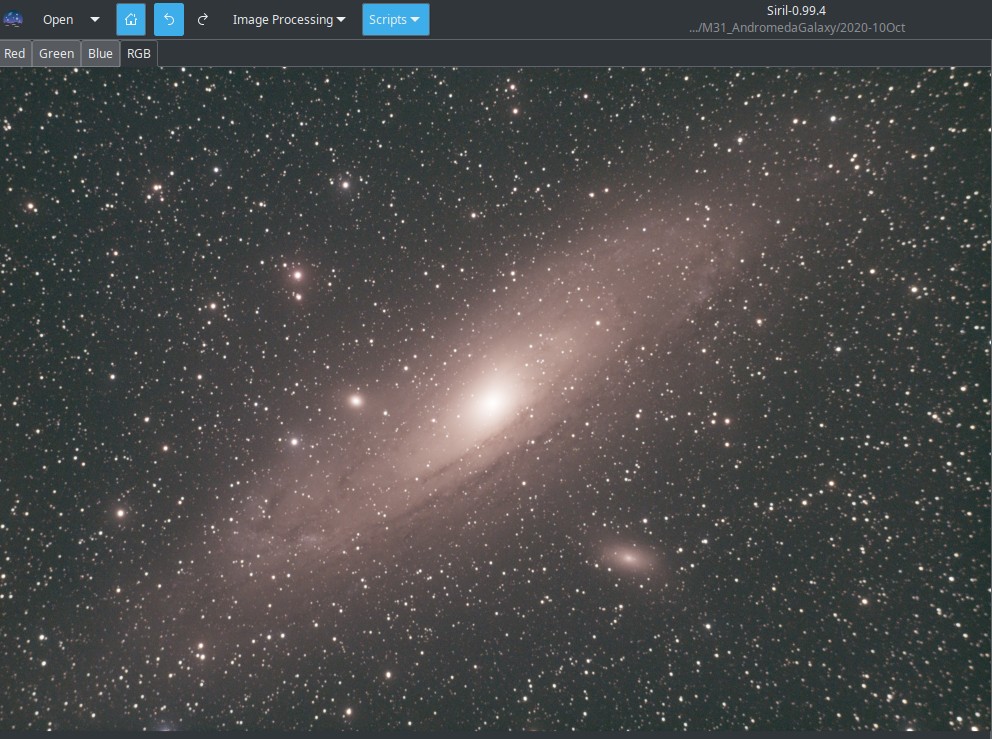 This is just the basics: photometric colour correction and autostretch.

I’m pretty sure it’s not the camera, since others are capturing images like this with it: 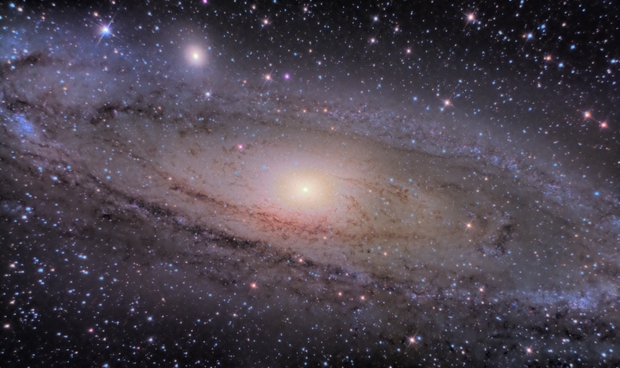 An astrophotograph by Yago on AstroBin

So I tried using Astap, and while I have not exactly become proficient with it, this is the result with the exact same data and calibration: 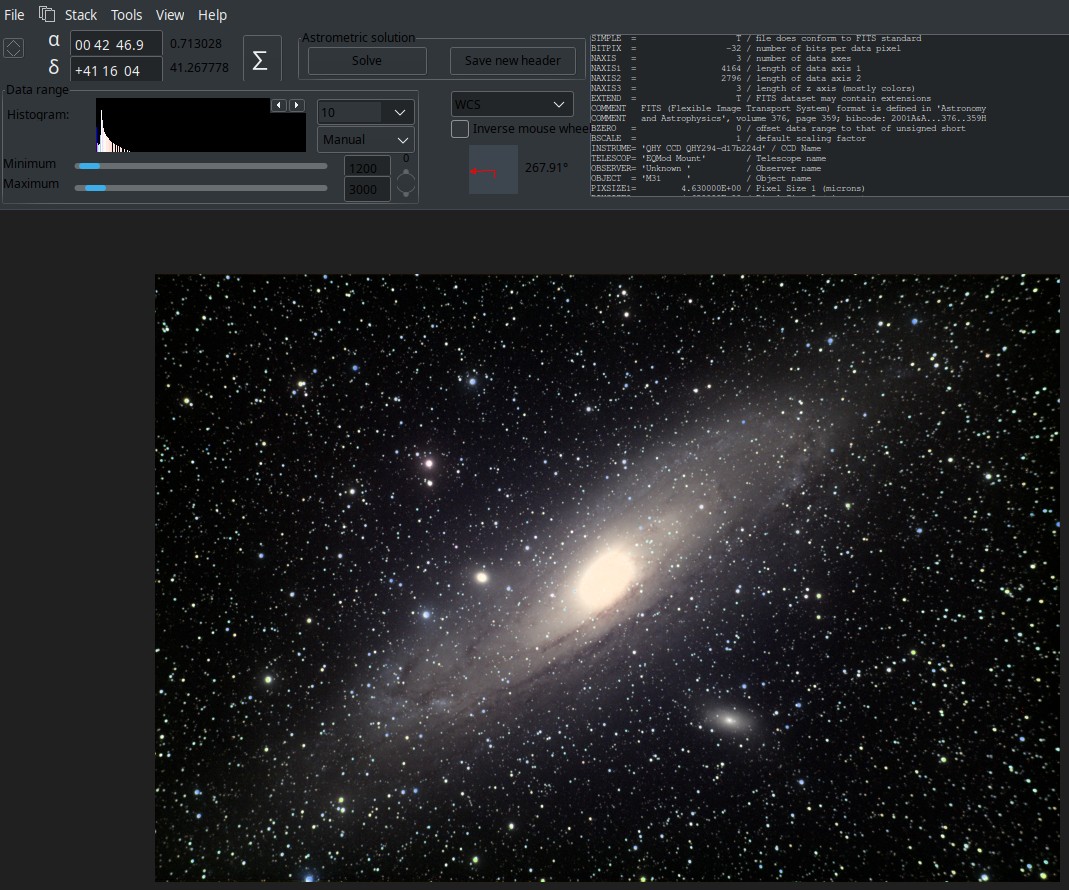 I had to adjust the black and white points but otherwise it’s as-stacked by Astap. This is far more in line with what I was expecting given 1h of data - the general blue, slightly purple cast is there.

Nor is this my first experience with this mauve-brown Andromeda issue. Last year, using a different telescope and a Fujifilm X-T1, I ended up with this image: 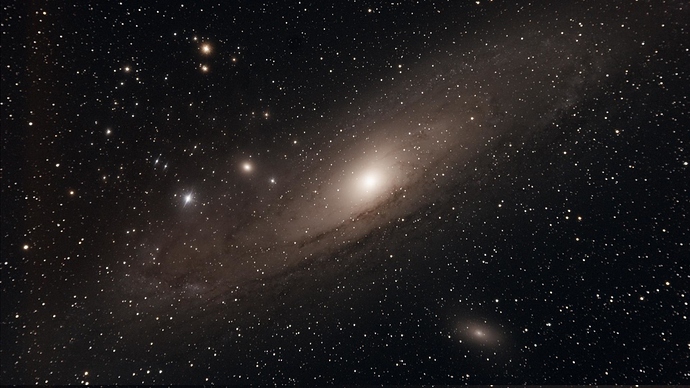 I’ve lost the original data (and there was a smudge on the sensor, so it’s pretty bad anyway) and I don’t recall exactly how much data there is here, but it was with similarly-long 280" exposures. Regardless, that similar mauve-brown colour cast is present, in contrast to other images of M31 taken with an X-T1:
https://www.astrobin.com/dh5fez/B/?nc=user

So what’s going on here? Why is Andromeda coming out mauve-brown?

Hi! The photometric colour correction will only work for unfiltered RGB images, or visible light-filtered RGB images to be more accurate. In 0.99.4 there was a problem with the detection of the Bayer matrix that led to wrong colours in the result, maybe that’s what you have here, but I thought it was only for DSLR or cameras that have an odd number of rows.

Maybe you can try again with 0.99.6. Are you using the default settings for demosaicing?

Now using 0.99.7, this is the same set of data but I didn’t use flat frame calibration, only dark frames (just in case it was the flats somehow causing the issue).

Here is what I get using photometric colour correction: 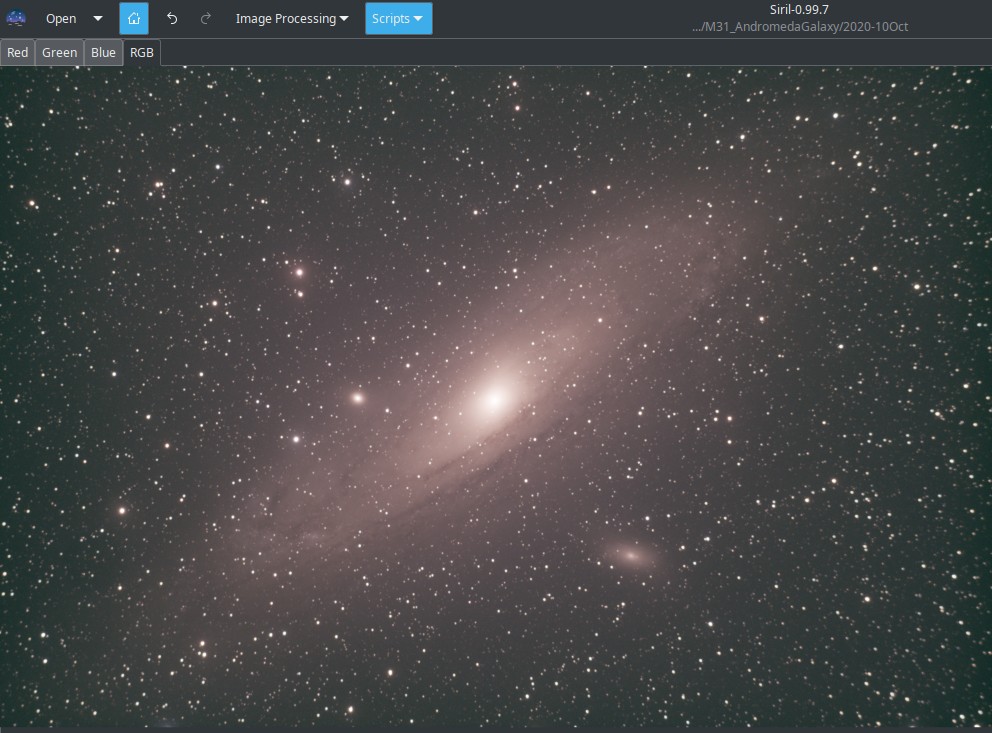 So the mauve-brown cast is still there. The image has a gauzier appearance than it did with the flat calibration, so the flats were doing their job before and not contributing to the discoloration.

If, however, I use ‘Remove Green Noise’ followed by a manual colour correction, this is what results: 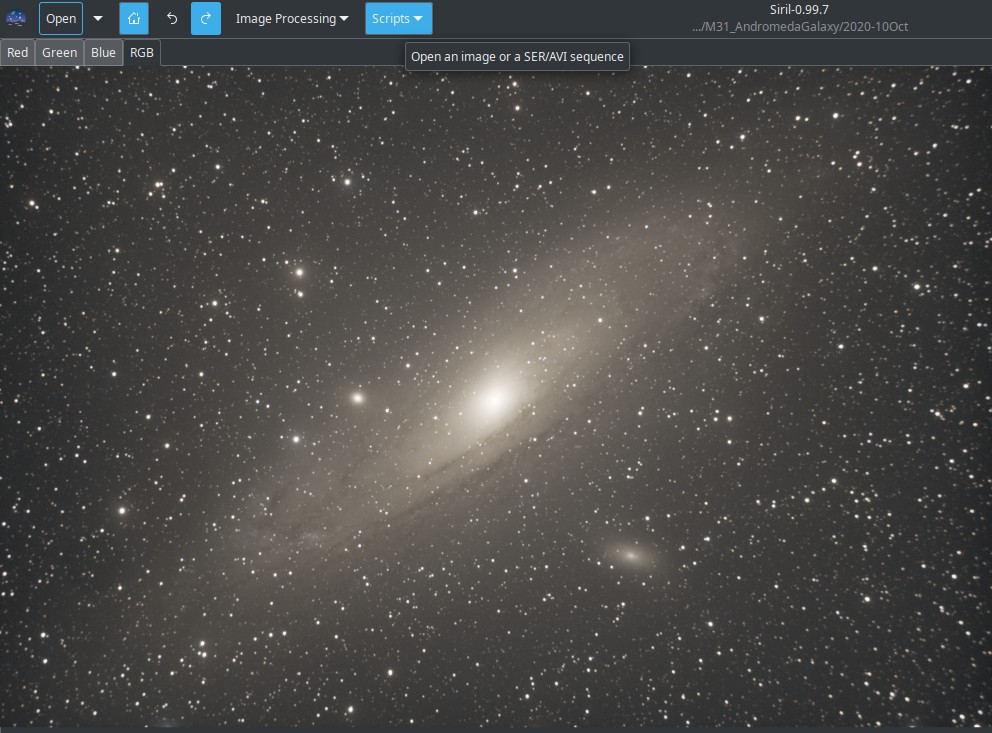 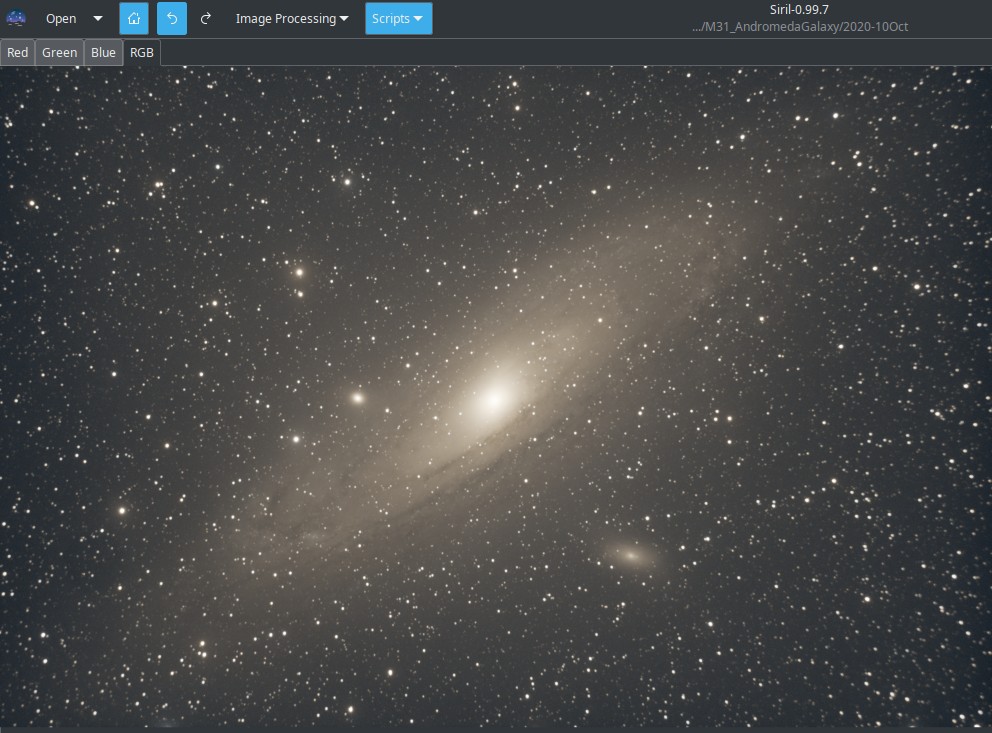 Not appreciably different than the manual colour correction, but there is a slightly yellow cast to the galaxy

So the PhCC is not dealing with the green noise.

Nevertheless, even the two that underwent green noise removal still aren’t showing any actual colour to speak of - it barely looks like it isn’t a B&W image. I’m still not seeing the blues that were present in the ASTAP stack, for instance.

@lock042 do you have an idea what’s happening?

Nothing special.
First we should not use the photometric color calibration tool with CLS, UHC or other filter that are not full spectrum. Using these filters you have some lacks.

So I tried using Astap, and while I have not exactly become proficient with it, this is the result with the exact same data and calibration:

For me, these colors are not really good. Everything is saturated, even the core of the galaxy.

Many reasons can explain why it is difficult to recover colors. And in your case I think that your data are the issue. Maybe you have shot with Moon light, close to a town with a large amount of light. Anyway, the ASTAP stack does not show anything better, just a different white balance and more saturated light. But any “true” colors.

This is something that user should not try. Indeed, the “remove green” tool is a tool that impact too much the green layer. Some information are lost and can’t be recovered. This tool must always be used at the end.

So, for me the PCC tool is ok, but your data have no color information. CLS filters are generally used for nebulae, not full spectrum object.

Right, I didn’t see there was a CLS filter…

There’s no CLS filter in these images.

All of the images in this thread were taken WITHOUT a CLS filter.

OK. So forget the CLS part.

But for me, the lack of colour information is true. If no color data available, no photometry possible. 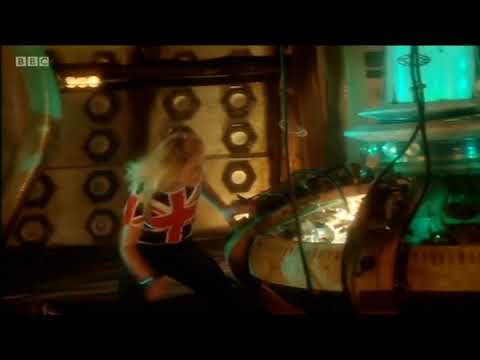 This isn’t a lack of data issue. We had a remarkable run of clear nights at the beginning of November, with no Moon in the evening. I was shooting from Bortle 4 skies about 45 km from the city, when M31 was generally overhead (and it doesn’t rise from the direction of the city anyway). lightpollutionmap.info gives the following as the sky conditions:
Brightness 0.300 mcd/m2
Artif. bright. 129 μcd/m

This first image is from about 2.5h of data using 2 min subs: 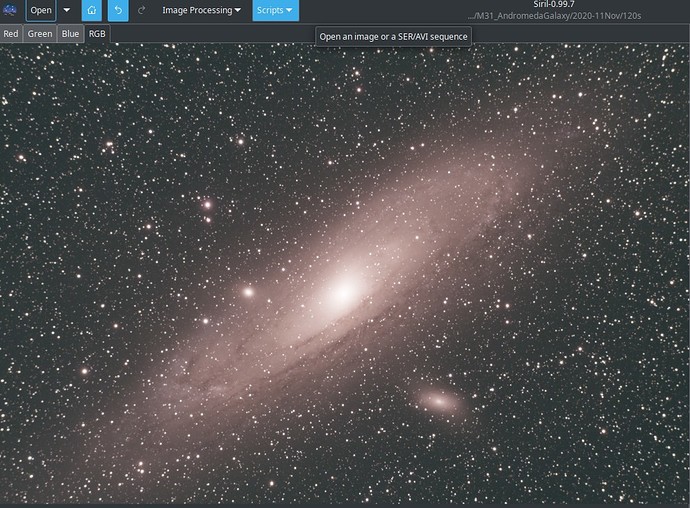 The second image is about 5h20 of data using 3 min subs: 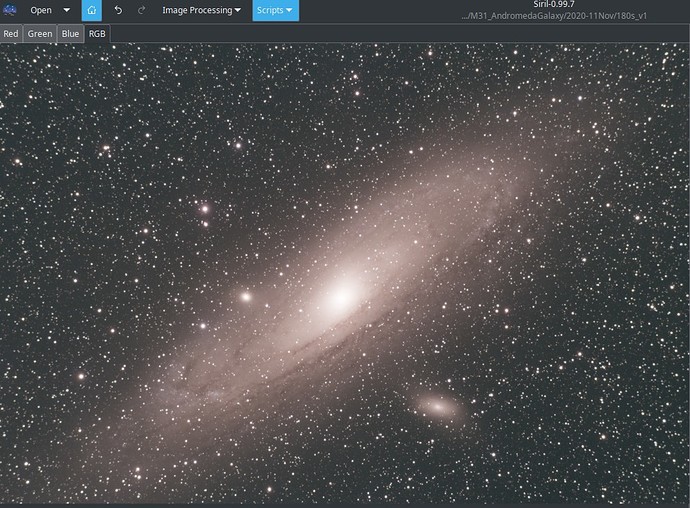 And it’s everything in the image lacks correct colour: the pair of closely-located bright stars about as far from M32 as M32 is from the core of M31 should be ruddy.

For a sanity check, I shot an hour of 2 min subs on M33. Here’s what that looks like after going through PhCC: 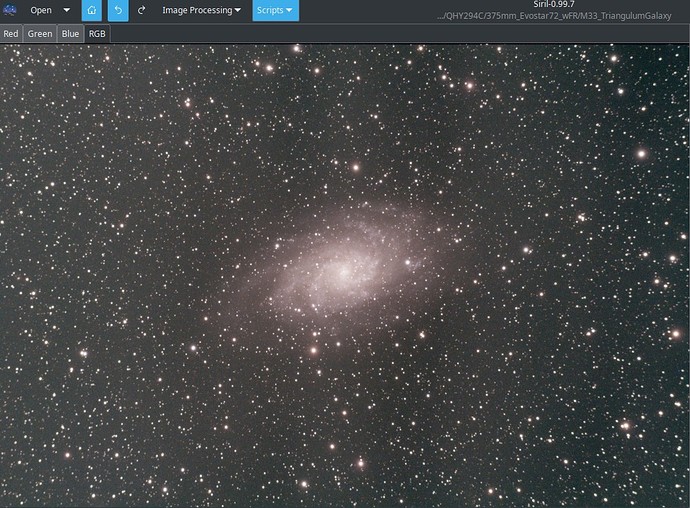 So the same mauve-brown discolouration is present here as well.

Given I had better colour results with ASTAP before, I decided to play around some more with it and see what I could do, this time with the 2.5h of 2 min subs. Doing so has led me to conclude the problem is definitely with Siril. What I did was I processed the images in ASTAP, exported the result without stretching and opened it up in Siril. Here’s what that looks like with Siril’s default Autostretch: 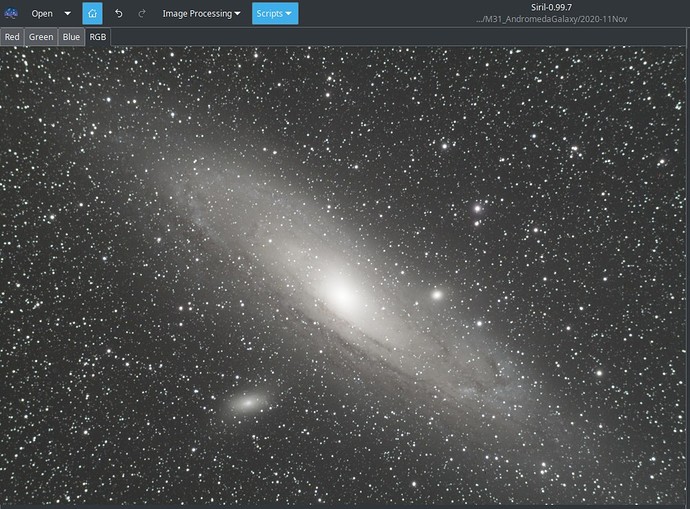 The first notable thing is that ASTAP has stripped out the green noise during the processing. It’s also in a mirror reverse orientation. But overall, it’s a decent result.

But here’s where things get interesting. I now applied Siril’s PhCC to this image: 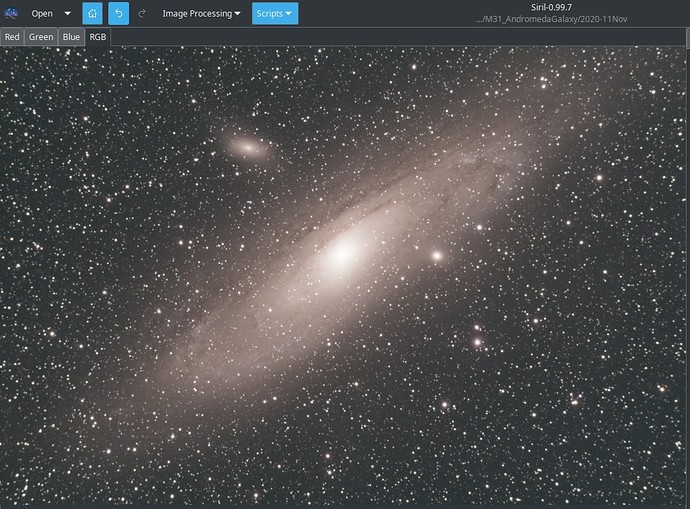 We’re back to that awful mauve-brown colour cast. The orientation is also 180° from what I want, so I decided to back out the PhCC and flip the image manually, so like this: 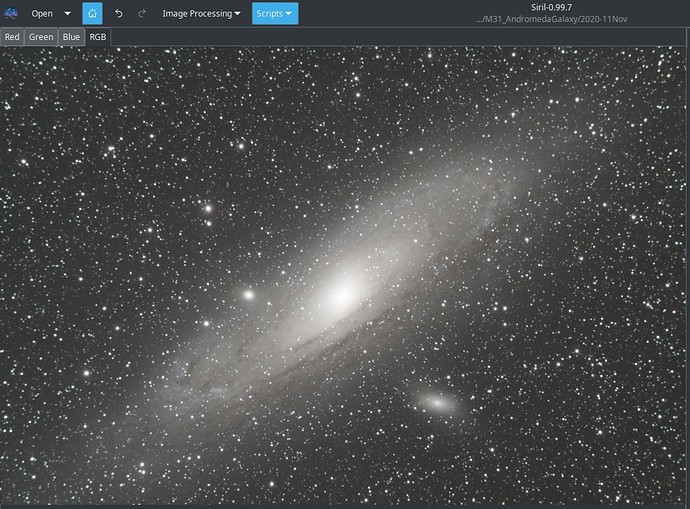 But now things get even more interesting; I reapplied the PhCC and this is what results:

After some additional fiddling with Histogram and Asinh transformations and boosting colour saturation, this relatively pleasing image emerges: 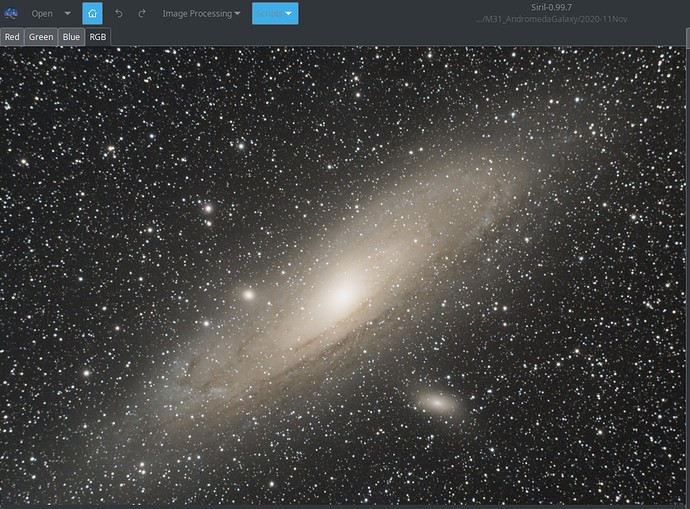 For comparison, this is what I was able to do with ASTAP alone: 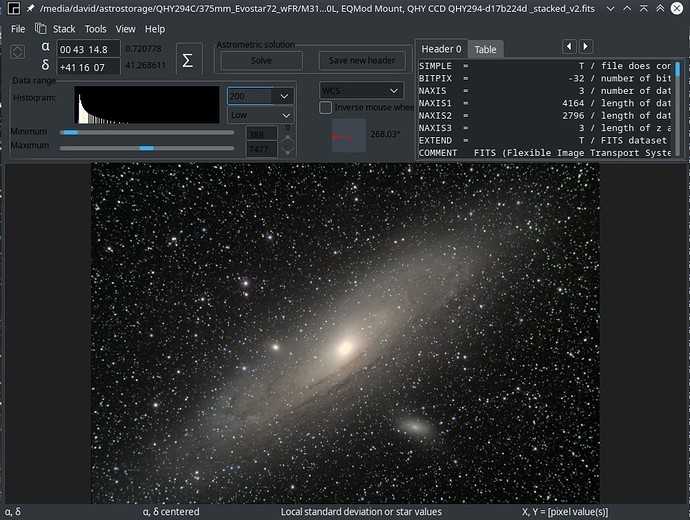 It has more distinguished star colours but the core is blown out even though the background is darker. So I prefer the galaxy using Siril’s Image Processing tools but I prefer Astap’s starfield and background.

Interesting. Did you find a solution to this?
I have similar results and I have another thread at the moment looking for an answer.
I get the result similar to you when I stack RAWs (canon dslr) but if I convert them to tifs first and then stack with siril I get good color that I can work with

By first converting in Tif you debayer your images and apply the white balance from camera.