To achieve this I unfortunately had to disable libomp support as it was creating linking issues.
Otherwise I’d end up the compilation with a make error 2 right after a linker error

Here are the steps I followed:

Building ART
In order to build it:

mkdir build → creating the folder in which to build the project

export SYSTEM_VERSION_COMPAT=1 → it expects to find macOS version 10.something while newer versions of macOS are actually using version 12, this makes the OS appear to the compiler as 10.16

sudo xcode-select --switch /Applications/Xcode.app → don’t really know why but it stopped at 1% if I selected /Library/Developers/CommandLineTools as compilation tools
export

option to support library indexing of software installed through brew, otherwise the compilation would stop at 2% telling me that libssh.h couldn’t be found from exiv2 sources, there should be some way to add those onto the CMakeLists.txt file but I really don’t know how.

make → to compile the program

Comments
Does anyone know if and how libomp is affecting the program itself and how to fix this problem?

Also I’ve noticed the graphics of the program are not retina-ready but currently showing as lower resolution, is there any way to fix this as well? I’ve tried opening an issue on agriggio’s bitbucket repo but really couldn’t as that page loads as I was not logged in on bitbucket.

Here is the current CMakeLists.txt: https://file.io/BYSEojdDXwXM

Hi,
Thanks for the info! Great to see some progress on this, although not having openmp will be a huge performance problem I’m afraid…
Regarding the UI scaling, did you try enabling the “pseudo hi-dpi” mode in the preferences? (I have no idea whether it works on osx but it’s worth trying)

I should have re-enable openmp in the last build (I have uploaded the newer CMakeLists.txt and the build result), I’m not really a developer so I don’t really know if I messed anything up

About the “pseudo hi-dpi” option it only works on the interface text (so the menus and panels surrounding the image itself), but apart from the UI becoming quite oversized there’s no change regarding neither the image itself, nor the thumbnails, nor the graphs or the text on the top left of the image showing the camera info unfortunately.

Ok, thanks for testing. Unfortunately I don’t have a mac so I can’t really help, sorry…

I can help with testing but not being a developer I’m not that sure I would be able to help much.

The UI in general, though, works faster with openMP enabled.

I do have a Mac, but I’m really a noob with mac’s and developing.
Maybe ping @heckflosse regarding the impact of libomp on the xtrans demosaicing.

But while with rawtherapee the command:

actually did work to overcome the linking problem, using it on ART source code

Did result in another linking errror:

You probably get this error because /opt/local/bin/ar does not exist. There is likely a smarter solution than mine but I solved this by creating a symlink:
sudo ln -s /usr/local/Cellar/llvm/13.0.1_1/bin/llvm-ar /opt/local/bin/ar

Delete and recreate your build directory and try again. Worked for me. 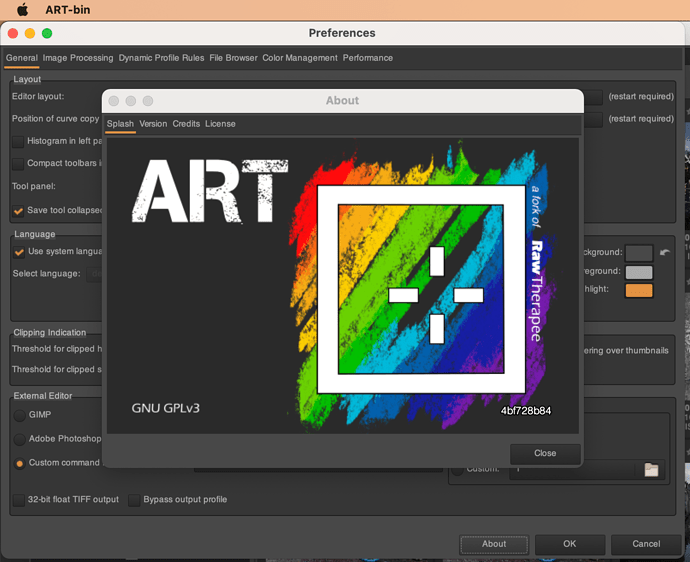 Thanks @FrankdeJong! I’ve built it too!

I’ve uploaded a copy of the disk image here for anyone to download. I’ve built it on macOS Monterey so I’m not sure this works on older macOS versions.

Hi, is this a permanent url? If so, I can link it from the ART webpage if you think it’s ok…

unfortunately is not permanent, didn’t know that. I’ll rebuild it (as I’ve deleted the disk image and only kept the application) and reupload it tomorrow - hopefully.

Btw: there are a couple of showstopping bugs:

Thanks for reporting. Would you be able to reproduce this in a debug build under gdb and get a backtrace? (There are instructions about this in rawpedia)

What could also be useful is testing if you have the same issue when starting ART from the command line in your [source]/build/Release/MacOS folder. For example the crash when opening a file explorer windows does not happen for me when running ART this way. It does happen when running the ‘installed’ version.

So it is likely an issue with the macosx_bundle.sh file. Look carefully for errors in the output of the ‘make macosx_bundle’ command. It also generates a ton of warnings so it is easy to overlook errors. 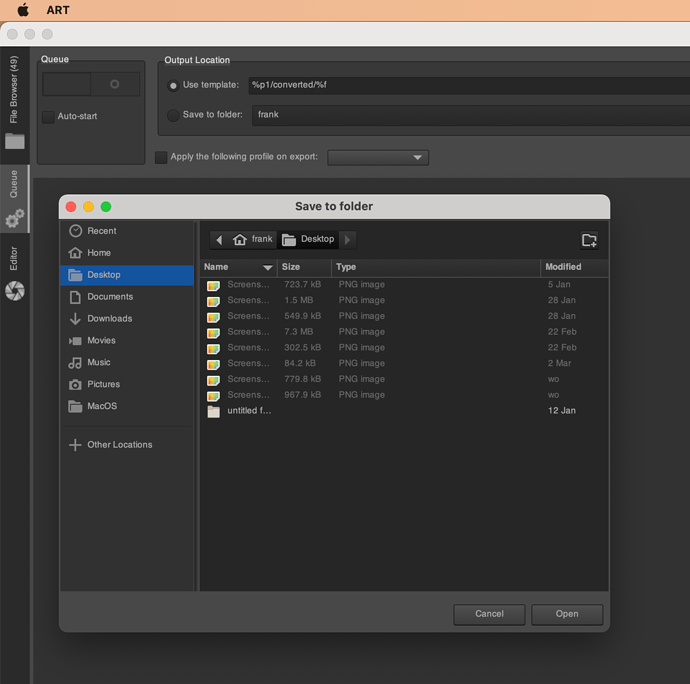 Here is the full output in case anyone could identify any problem, I’m not really able enough to understand what the output means: complete ART build process terminal output · GitHub

Here is a “permament” upload location, would be better to upload to one of the git repositories though: 77.18 MB file on MEGA

ART was forked at a time when

was introducing enhanced Gatekeeper security, and could be running a bit behind what has since transpired in the RT commit log.

Would it make sense for interested users to buy you a hosted VM? For example: