My Shot of the Year

I’ve been saving this one for my New Year’s episode, so it’s really special to me. I’d love to see what others come up with. Here’s the RAW file

I took this up on Hurricane Pass in Colorado last summer around midnight. There wasn’t a moon, and the light in the background is from Durango. 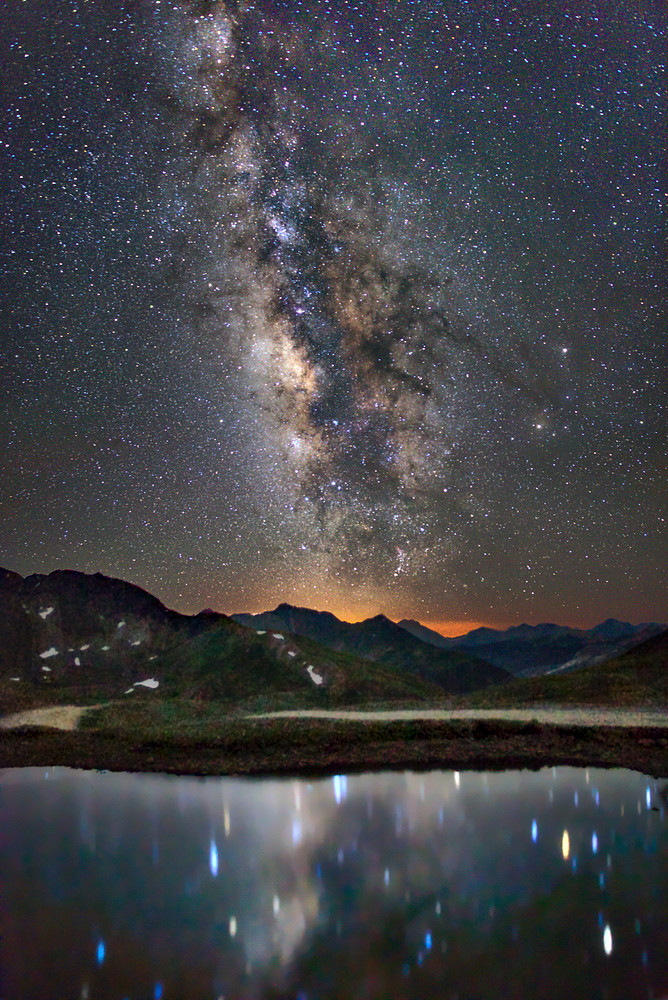 This work by Harry Durgin is licensed under a Creative Commons Attribution-NonCommercial-ShareAlike 4.0 International License.

The reflection of the stars in the water really make this for me, kudos!

Harry, I’m not going to even pretend I could improve on that…great work!

OK, so I had a really quick go at this one, as we are about to head out for dinner

I haven’t been able to bring out the foreground as well as your processing, but I don’t mind darker images when working with the Milky way.

I’m still learning my way with RT’s noise reduction and trying to get stronger contrast. But for a quick edit in about 5-8 minutes under pressure to go have a shower, I don’t mind this result so far. 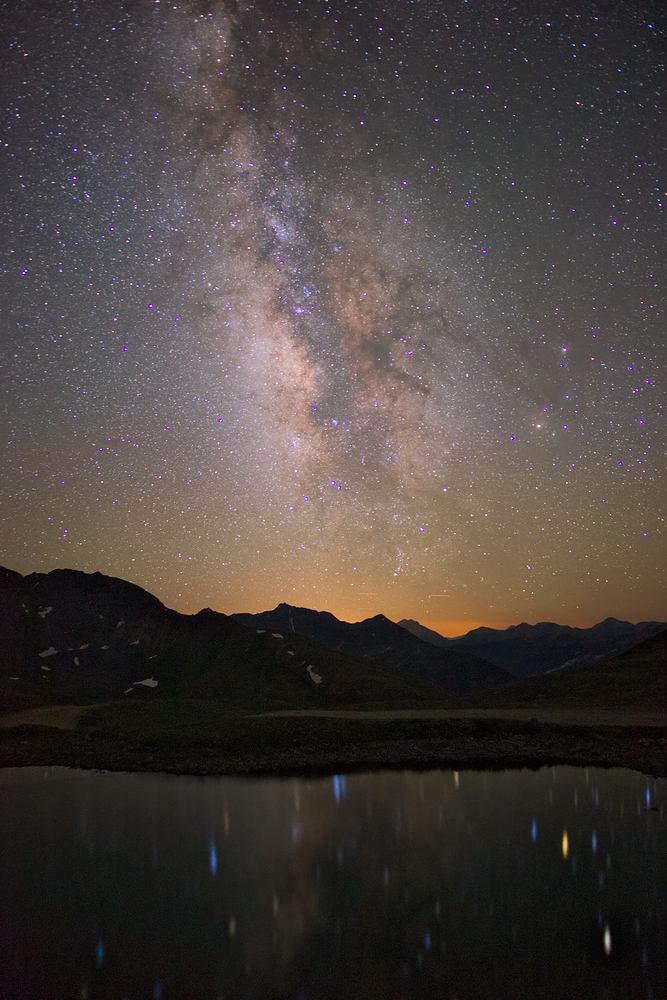 Thanks for the awesome picture, Harry. Basically you can’t do much wrong as the base picture is that good. 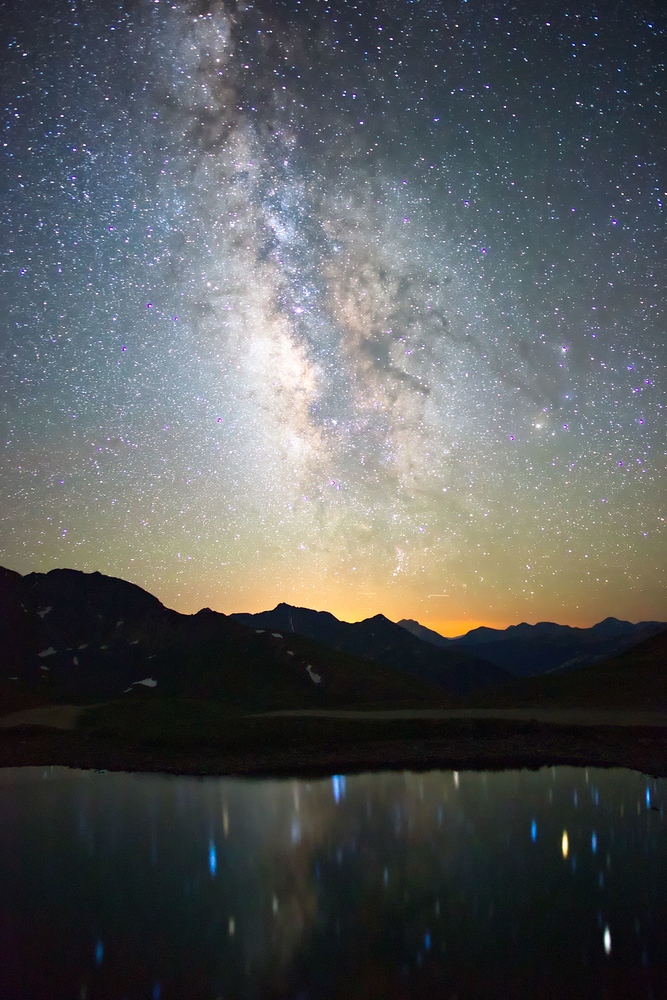 2000×2996 772 KB
I didn’t really care for the mountains as they are very noisy anyway, but I made the lake a little brighter and more colorfull…

If you get to such a nice view again you could try taking multiple exposures. Typically at least one long one (few minutes) for the foreground, possibly a bit brighter than you did. A bunch of short ones of the sky for stacking. The sky I’d expose less, you are clipping of quite a bit already. In essence you are losing some relevant information (the relative brightness of the stars) to store a bit more noise instead. From my experience at these ISOs raising exposure in post is nearly identical to raising the ISO(*). So if you shoot at 1600 you get more dynamic range and you can then still boost the image in post.

Here is my edit with RT+Gimp+G’MIC: 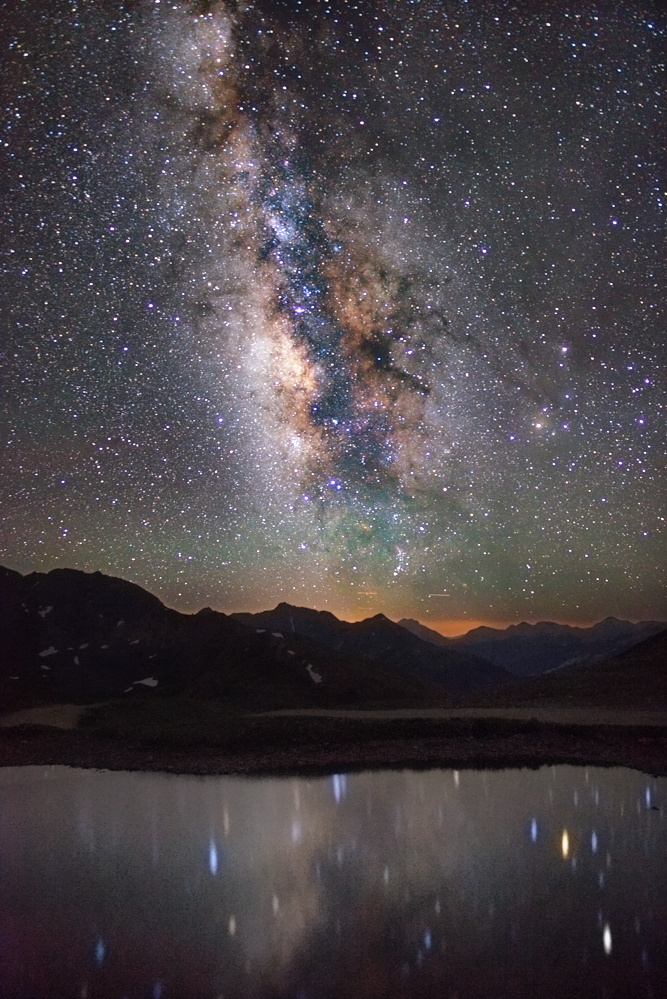 Edit: (*) It’s worth mentioning that this does depend on the camera. For instance with my a6000 there is something happening between iso 800 and 1600 but then 1600 to 6400 look like they are just multiplied in camera.

This one’s great. Could give us some hints on what you have done?
And if I remember correctly… we are all still eagerly awaiting your astrophotography tutorial.

[quote=“McCap, post:9, topic:2972”]
And if I remember correctly… we are all still eagerly awaiting your astrophotography tutorial.

Yes. My main excuse for procastinating this is that I want to have a really nice picture to demonstrate it on, that I’ve yet got to take.

Re the processing, it’s a lot of tiny steps. Roughly:

Thanks, some interesting ideas in your processing!

I went scouting for a while to find a lake facing the right way. I’ve always wanted a reflection of the Milky Way. You may be right about the mountains. I really had to fight the noise in them, might have been better to let them be dark.

I love how the glow in the sky looks in your version with the contrast of the darker mountains.

My original plan was to stack a couple dozen shots, but it was windy most of the time up there and this was the only shot with a full 20 seconds of calm. (better tripod?) I think you’re right about the blown out stars. Regardless of stacking I needed to shoot at a lower ISO to keep them in check.

I’ve now got a tracking mount, but I haven’t tried tracking the sky for a couple of minutes, then turning off the motor and shooting the landscape. I guess if I did that I could shoot at an even lower ISO and gain another stop of dynamic range… am I thinking that right?

I love your edit. Your mountains are a bit darker, but you can still see enough detail to enjoy them. Nice balance. Thank you for your input. Can’t wait for my next night shooting adventure.

There has been an article, maybe on petapixel, with the author showing a great shot of stars (don’t remember if it was the milky way) with foreground, and he claimed he had used a self-written software that is able to compute the star view out of a star trail long exposure. I think such an approach could give the needed extra dynamic range. IIRC this author wanted to sell the software, no plans around FLOSS. But maybe it is possible to solve this, e.g. with a little G’MIC, as well. Maybe detection of the star trails’ geometry by hough transform? Any ideas?

@harry_durgin can I have your permission to embed the raw file in this post? Also - any chance you’d be willing to license it with a permissive license?

Well, I’ll grab a copy of the raw file and embed it in your first post for you.

As for license, simply state which license we are allowed to use for it. I would recommend one of the Creative Commons licenses, like CC-BY-SA (By attribution, share alike):

Did I do that right? Thanks for all the love Pat

Absolutely! And no thanks for me needed - it’s trivial compared to having to create these videos!

Would some of the stars run into others?