This past week I’ve begun work on a feature for Filmulator that makes it much better for occasional users: Import in Place.

As it is now, Filmulator will only read in entire directories of raws, and it copies all of contents into a location you set, as well as to an optional backup. It’s handy for me, the author, because I don’t want to have to move the files and then import into Filmulator, but it’s definitely an obstacle for people who either just want to try the program or who only want to use it for some of their photos. 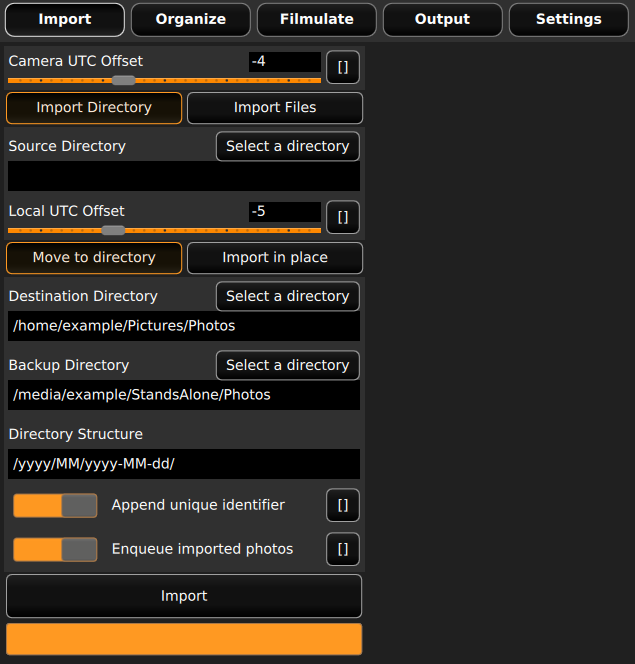 When you select the alternate buttons “Import Files” and “Import in place”, the UI changes to reflect the new options. 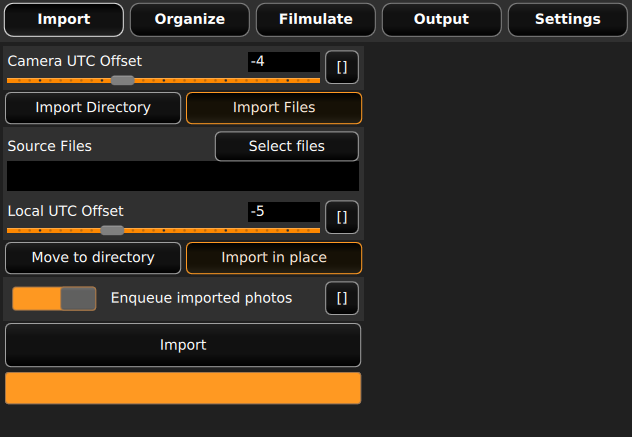 The directory selector is swapped out for a file selector that filters for raw files (in the future, I’ll also make linear TIFF and maybe EXR imports possible).

When importing in place, the destination, backup, and appended hash options disappear because they’re no longer applicable.

I’m not done with the backend yet, but hopefully it’ll be ready within the next week or so…

I spotted someone voicing a concern on Reddit about Lightroom allowing users to import in place from their memory cards, causing data loss when they then format those cards…so I’ve added a feature that checks the file path for the substring “DCIM” and warning the user if they’re about to make a mistake. 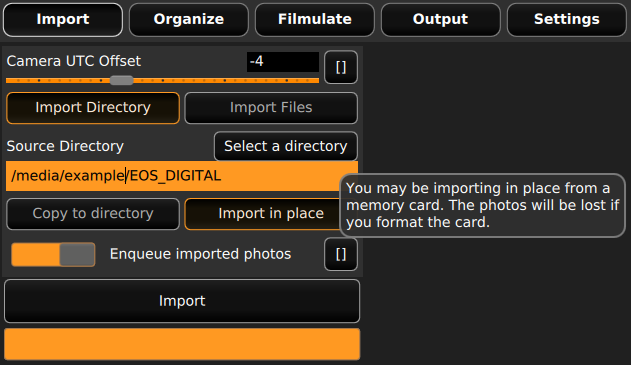 (You may also notice that I’ve restyled the inactive radio buttons and aligned their outer edges properly, and added the proper matching background color as well. I also made the radio buttons highlight in dark orange the tools they are going to affect, making their purpose discoverable and intuitive.)

(Also, in the process of writing this post, I noticed in the original screenshot a misalignment at the non-integer scalings that I use on my desktop and fixed that so I could have a nice screenshot.)

Easier than I expected, I guess. These things always turn out this way, but on the other hand I spent a week thinking about the backend before putting it down in code, so it’s not like it was fast even though it was easy.

It’s live on the dev branch on my GitHub.

I’ve merged this into master, with one more tweak (invalid multi-file inputs weren’t being highlighted and any valid files in the list would be imported), and updated the wiki.

I have one issue with this. I cleared my queue and now I can’t re-import files I cleared.