Since I have a Fuji X-T1, I have access to a limited edition
of the Silkypix software. In their latest Pro release, a new noise
reduction feature has been added, entitled “Fine Detail”.

Has anyone had a look at that particuilar feature?
Does it differ much from what we have available in the
FOSS world?

What does that feature do? Do you have a link with examples? Nothing turns up in a search. Can you post screenshots and an explanation?

I’d imagine most of us here don’t use Silkypix, so we simply can’t tell you without that kind of info.

(FWIW: I have an X-T2 and use darktable with it. The noise reduction is now very, very good as of darktable 3.0.)

Here is a link to their presentation site:
https://silkypix.isl.co.jp/en/product/dsp10/?utm_source=MZ&utm_medium=email&utm_campaign=sne374d

It looks like Silkypix basically improved their denoising to show more fine details in the image. I’m not sure if they’re using “Fine Detail” as a marketing name for the module or if they’re just showing that their denoise algorithm preserves fine details more.

It’s basically similar to how darktable improved denoising in the latest major release.

If you want to preserve details as much as possible, I’d suggest increasing “central pixel weight (details)” and “preserve shadows”. (Playing with “patch size” can also affect denoising versus details too.) The values really depend on the photo.

In darktable, you can also selectively apply the denoising. If it’s too strong, you can fade it out to something like 70% to mostly denoise, but blend some noise back in. (Noise isn’t necessarily a bad thing.) You can also use drawn masks or parametric masks to denoise some parts of the image more aggressively and other parts not-so-much (or not at all). This especially works well when feathering the mask.

Here’s a video on the improved “denoise (profiled)” module in darktable 3.0: 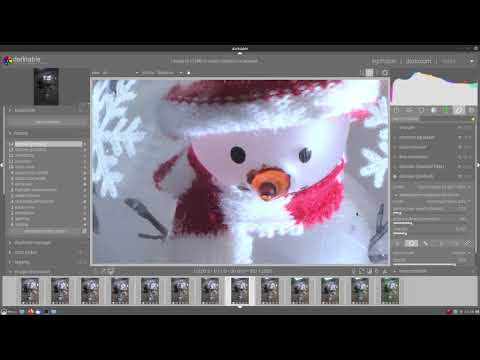 And a thread on the improved module:

This post aims at describing the changes I made since January in darktable for noise reduction. Context: how does the denoise profiled works What is the profile? A profile is a set of a few parameters (2 per channel and per ISO value in our case) that describe the way the noise variance change depending on luminosity. Variance is a measure of the dispersion of values around the mean: in our case it gives information on how far the values of the noisy pixels can be from the values they should…

(I don’t like most of the same images, as they’re showing poor quality images and agressive denoising. But that’s to show what can be done with a challange, I guess? The forest scenes are better, and I’ve seen amazing results from the “denoise (profiled)” with a lot of my higher ISO photos.)

Of course, the best way to have minimum noise in a photo is to shoot with proper exposure at the lowest ISO you can. (It’s often not possible, of course. And we all forget to adjust the ISO sometimes too.) But shooting with a low ISO and underexposing will also cause higher noise as well, as increasing the ISO is often basically same as boosting underexposed images in modern cameras. Thankfully, we have great denoising available for the times our images do have noise.

their “sharp” denoise looks more like nlmeans while the other looks more like wavelets. the sharp mode seems more like the piecewise constant prior. sometimes works well, sometimes not so much. not sure i find it revolutionary. looks very well done though.

the multi-image composite looks great, why don’t we have it.