Night picture with a phone

i’m trying to get the most out of my smartphone, and i would like to share what i’ve found out, but looking also for comments or suggestions

It’s a really cheap Honor 6A, and it supports Camera 2 API, so it can shoot in raw (for example with opencamera app, gpl and open source).

The “biggest” problems are vignetting (but i’ve made a lensfun profile for that, even if it’s not yet included and often leads to problems with clipped highlights and Raw Therapee, as of Lensfun vignetting correction and clipped highlight · Issue #4169 · Beep6581/RawTherapee · GitHub ), thus corners are much darker-noisier than the center, and night pictures since the minimum shutter speed is 0.7 seconds (@ F2.2, @ISO 100 that is anyway something like real ISO 25). And of course sensor given its size is really noisy.

In daylight condition i find the image much better than expected, and for the price of the phone i find it’s quite great.

With opencamera i can choose a self timer delay (e.g. 2 seconds), and i can choose to shot 1 picture, 2,4,5,10, and unlimited pictures with a single shutter press. I choosed 10.

Since noise is random, i think it would be useful to use more than 1 picture to average the noise and so to get better image quality. And ok, it works.

I copied the profile i’ve used for the first image in Raw Therapee, pasted it for the other 9 nine images, and batch queued the files.

So i’ve made a profile for Raw Therapee (using vignetting correction from the attached xml file, and velvia 100 generic from official lut) with curves in order to create a well exposed (imho

I leaved almost no noise reduction, but i really think this step could be improved a bit.

I share dng files (converted-compressed with Adobe dng converter via Wine on Linux in order to save a lot of space), the pp3 profile, the xml vignetting correction for the lensfun (needs to be choosed manually), the original jpeg and the final result.

To get better exposed pictures instead of pushing curves i think i could sum layers in Gimp, but doesn’t seem to work that well, and i haven’t found yet a way to get a combination of “averaged noise” and “sum exposures”.

Thank you in advance and sorry for the long post! 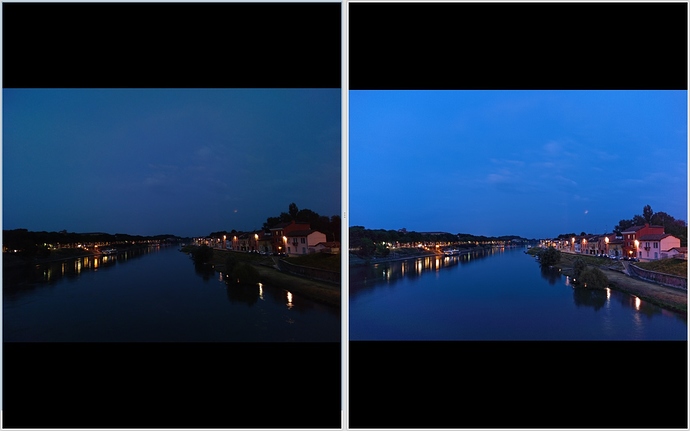 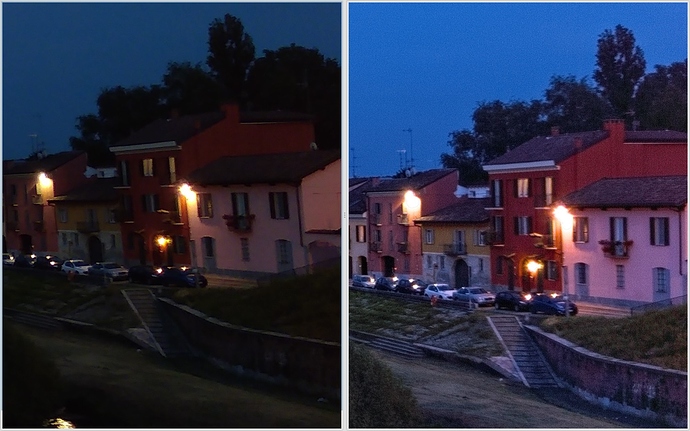 HDRMerge? You might also want to try enfuse for better noise and exposure blending.

HDRMerge doesn’t seem to average raw, only to create better dynamic range from bracketed shots (an my shots are all 0.7s ISO 100 F2.2) .

Also enfuse doesn’t work with raw, even if it’s nice to blend exposures.

I don’t think you’ll find a raw average software. To see tbr noise you have to demoasic the data, and once a raw is demoasiced, it isn’t raw anymore.

I usually do this:

I’ve tried, but output with mean is better imho than output median, and also much faster.

@ggc You are right. Sorry that my quick reply wasn’t helpful.

Mean v median: one is not necessarily better than the other; it depends on your images. If your aim is to remove objects, then median is the way to go.

Adding to @paperdigits’s point (1), I would try not to do that much to the development of the images. The more you push them, the less effective the noise reduction blending shall be. If you are using RT, I would do everything that applies to the raw pipeline and leave everything else post-blend. You can always re-import your blended image for a second round of processing.

I mentioned enfuse because I find it that does a better job than a mere mean or median blend.

As an Android user, amateur photographer, and FOSS advocate, I’ve long wished for a fully FOSS imaging pipeline on Android. I often use my Android phone for photography. It’s always on me and the camera hardware in them keeps getting better and better. There’s been some great FOSS Android software improvements recently too. I’ve finally figured out a fully FOSS pipeline that can go from raw image capture right through to a final, processed image. This post is meant to share the pipeline I’ve dis…

… you can do it faster with Gimp G’mic plugin. In the Layers group, you have Average (mean), Average (median), etc (not sure about the wording…)
I used to do it that way until I found G’mic here on the forum.

Ha, don’t be sorry. I’d appreciate an even longer post, since this is an interesting subject (of which not too much is written).

@patdavid Would phone photography be worthy of a department of its own on pixls.us?

I don’t think a phone photography category could stand on its own. I also don’t think the capture tool matters too much. Lots of cameras, phone or otherwise, generate a lot of noise.

Great. I’ll try it, for now i’ve troubles with flatpak and g’mic but soon i’ll try ubuntu mate 18.04 plus ppa and g’mic…

@ggc Maybe you should try appimages, which are kind of a flatpak thing. Super easy to run: download it, make it executable and that’s all. (not sure if they run on Windows, and you don’t need to upgrade do 18.04)
Here’s the link to where you have the latest Gimp bundled with lots of plugins, G’mic included. Look for the latest date (as of now, it’s the 2018-05-17 one). I’ve been using these images and, although it’s a beta version (I guess), it’s the latest and greatest and it’s very stable.

Not really a night picture, but i have tried to fix vignetting with flat field (that has a clip control), but this leads to a big change in borders colors… much more than expected.

I attach the flat field (the one i’ve also used for lensfun profiling, but atm lensfun vignetting correction doesn’t yet have a clip control, as of bug 4169 ), both out of “phone app” and converted with dngconverter, and a picture that show significant vignetting. 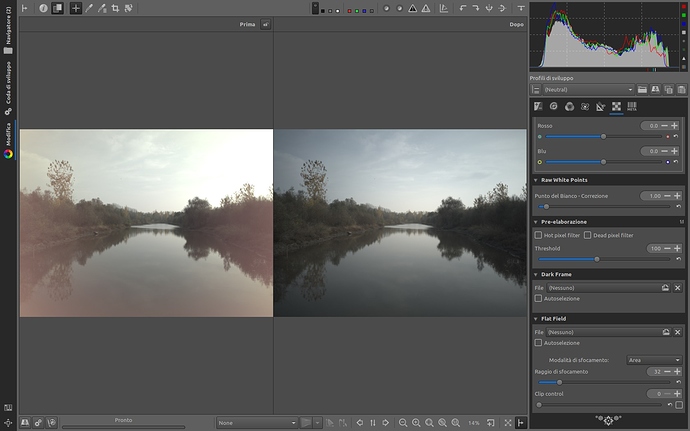 Thank you in advance.

A big thank you