This photo is basically the result of ‘left over’ photos that I took while setting up for the night. The moon was still up so the contrast and colors of the milkyway are more subtle (compared to this shot taken later). I had a hard time getting the colors to look reasonable on this one but I’m fairly happy with the result: 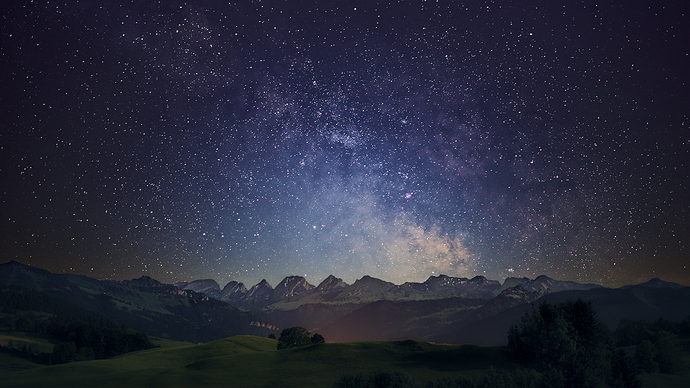 It’s a composite of over 20 shots, stacked to reduce noise. The this is an example of the input: 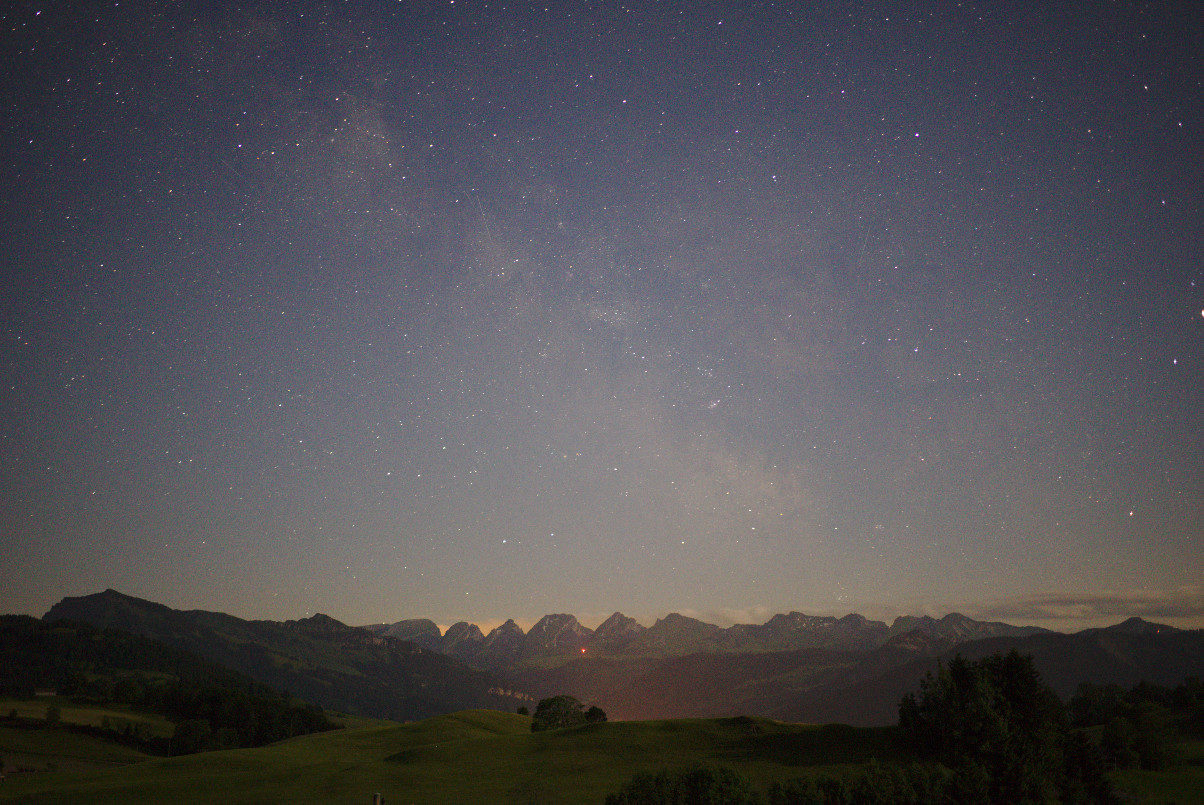 Happy to hear your feedback and suggestions.

Very nice, I am not even sure if I like the later shot without the moon better or this one.

Could you write a few lines how you took the photos? Are these 20 just done with relatively short exposure times? Otherwise I guess you would get star trails and with the stacking even more artifacts. So, what are the parameters of the single shots? And what did you use to stack those?

That is an awfully wonderful result!

Honestly, it’s tough. I’d have to really look to find something to critique…

I’d guess that there are a couple of things. For instance, did the relative brightness of the stars scale with the stacking and exposure you did? In the input example, there are very clearly some very bright stars relative to the others in the sky. I actually have a slightly hard time finding those same stars in the pattern of the final version - was this an aesthetic choice to scale/clamp those?

I also noticed the mid and far field mountains seem slightly muddy/hazy. This is purefly aesthetic, but I feel like haze reduction there might help make things feel a bit more ‘crisp’ on the ground?

I do like the colors very much. Very pretty, and nicely draws your eye to that horizon. It’s pleasing to let your eyes wander around the frame a bit soaking it in…

I think that is a fine shot. I would have tried to lessen the haziness/milkiness/dullness for the landscape portion of the shot, using any method that worked best. I would have also darkened the starless section of the sky, a bit. It’s hard to tell for sure, but maybe reduced chroma noise a bit. It looks like there may be some chroma noise as one nears the horizon, on each side of the image. It is a beautiful photograph, as it is. What lens and settings did you use for the individual shots, and where was this image taken?

So first on how it was created:
I don’t remember the exact details but I’ll try to reconstruct it from the exif data and memory.
It’s twenty six exposures of ~15s (it varied because again, these were taken while setting up)@f1.8 taken with the sony/zeiss 24mm f/1.8 on the a6000. Developed them using dark table. I then did two passes of aligning the images with hugin. Once for the stars and once for the foreground. I then stacked them, I usually do median stacking with image magick but it’s also possible that I used gmic, don’t remember. Processed the results again in darktable and then fed them into the gimp for compositing the foreground back onto the sky.

The shot was taken in one of the few halfway dark places in Switzerland (bellow 3000 masl anyways) in the Toggenburg. I’m not 100% sure but it’s likely that I’ve taken them from (what was once) my bedroom in my dads place.

If there is interest in this process I could try to write it down or record a video on it. It’s fairly resource and work intensive. Plus one could probably get similar if not better results by just sticking a fast lens on a A7S.

The ‘brightness clamping/compression’ comes mainly from three sources. The Noise reduction, curves and the exponential RL deconvolution sharpening I applied. It is a bit sad to reduce the ‘dynamic range’ between the stars. But I really like the ‘sky full of stars’ look, so I’m half way okay with that trade off. But it’s definitely a trade off and not a pure choice.

Regarding the foreground: If I would have planned this shot I would have taken a regular long exposure+darkframe for the foreground. Because I didn’t, I approximated it by stacking. I lost a good bit of details that way. I will try to recover some more of it. The grass in the foreground does look oddly flat.

Then again, the positive effect of this is that the eye wanders towards the center of the image where the most contrast and detail is located, which I like.

I’m not 100% sure but it’s likely that I’ve taken them from (what was once) my bedroom in my dads place.

Holy mackeral. My bedroom view growing up was the wall of our neighbors house 5 meters away…

Seriously though, I don’t know that I’ve ever wanted to walk into a photograph and run around the hills as much as that immediate foreground in your image. It just looks amazing to me.

If there is interest in this process I could try to write it down or record a video on it. It’s fairly resource and work intensive. Plus one could probably get similar if not better results by just sticking a fast lens on a A7S.

Yes, there is interest. Definitely from me at least. Even if you could do a basic workflow for first-timers doing stacked long exposures, I’m sure it will be received well.

If you would rather share your images, and some notes, I don’t mind doing the write-up for you (if you want).

Then again, the positive effect of this is that the eye wanders towards the center of the image where the most contrast and detail is located, which I like.

This is quite nice in my opinion as well. I like that the eye goes there, and there are beautiful things right near the area for the eye to wander over (and for some to wistfully dream of visiting a place like this).

I would find it very interesting to learn the process that you are describing.

All in all, I second @Wilam impressions…

I really like the brightness of the stars opposed to the dark hills and mountains.

The only thing that feels “odd” to me is the fact that the far mountains are brighter than the foreground grass fields and trees. Somehow, my brain expects the opposite…

Did you try to make the mountains darker? This might also improve the transition with the dark sky.

By the way, I would also be interested in the details of your work!

I’ll try to take some notes when I take the next photos/process then.

I tried some (most?) of your suggestions:

After that I played with the RGB curves again: 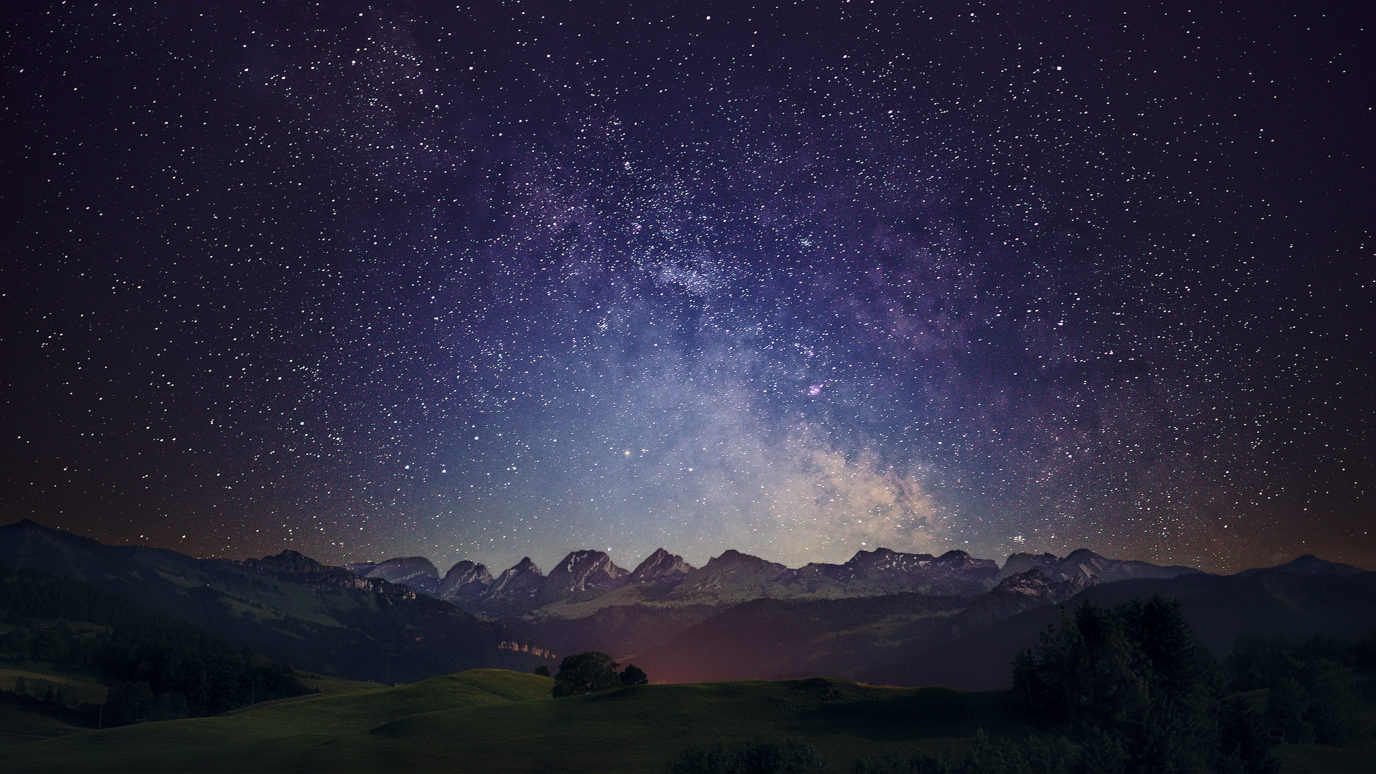 composite8-1_small.png1376×774 2.13 MB
In some moments and on some backdrops I like one version more than the other. But I really can’t decide. Might just not matter.

I like composite7-1 better than the other one. As Carmelo pointed out, the foreground brightness is still kind of bothersome. My final verdict is that I would love to be able to walk into that picture. It would be great to see that image/scene done with a separate foreground exposure + dark frame, as you had mentioned earlier. Thanks for posting this.