Out of Africa (Kruger National Park)

My wife took some nice wildlife and landscape shots on a business trip to southern Africa. This image she provides for a play raw. Isn’t all that easy to develop with the bright sky and the color noise.
Curious to see what you make of it! 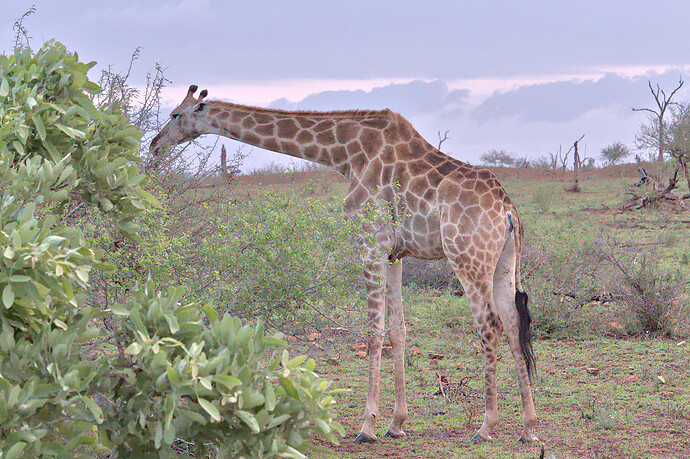 I decided to use separate instances of color balance for the sky and the plants. 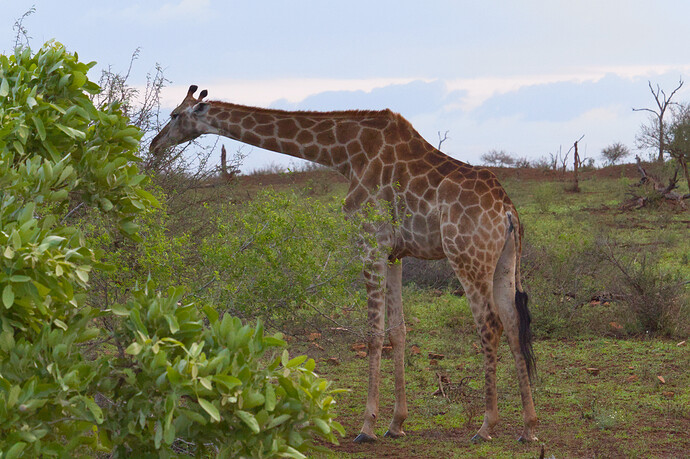 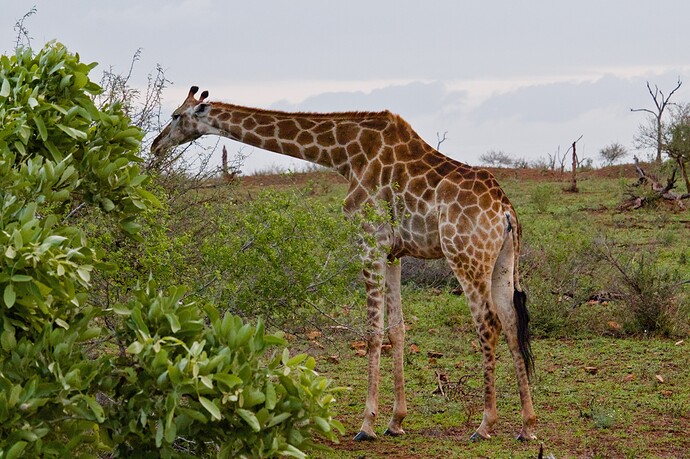 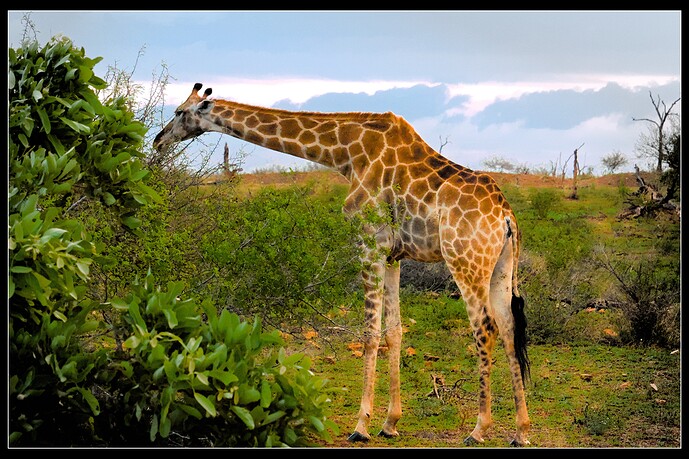 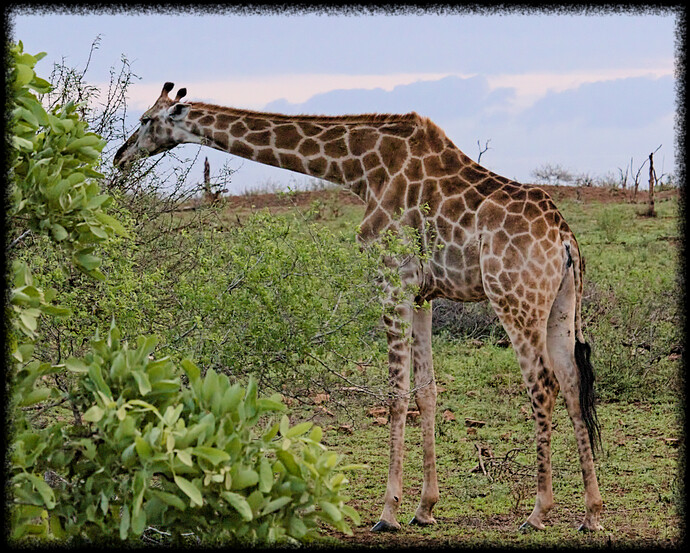 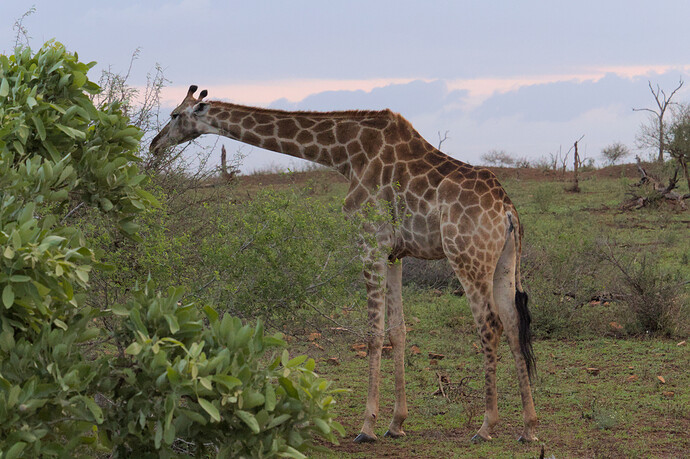 Affinity Photo 2 - Targeted exposure adjustment on the giraffe only via an edited hue mask, downsize and export as JPG

This was shot at 6400 ISO so there was a bit of noise that editing exacerbated. It looks like an overcast day so that’s the look I went for. 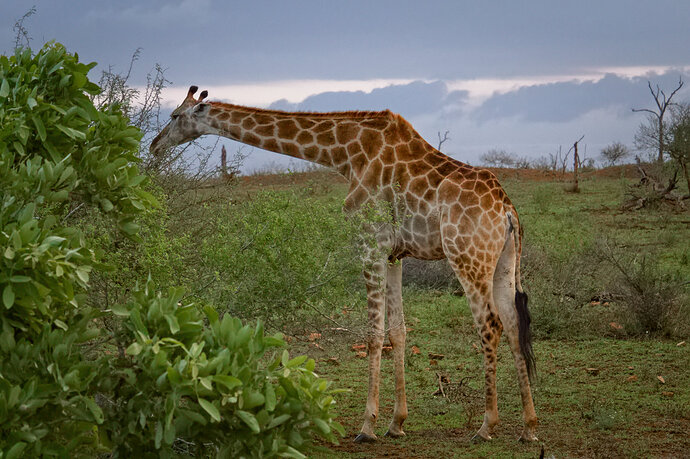 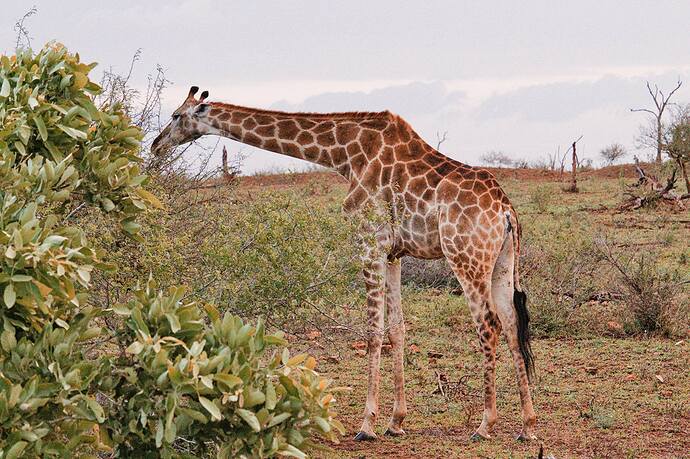 Edit… I wasn’t happy with it. New try! 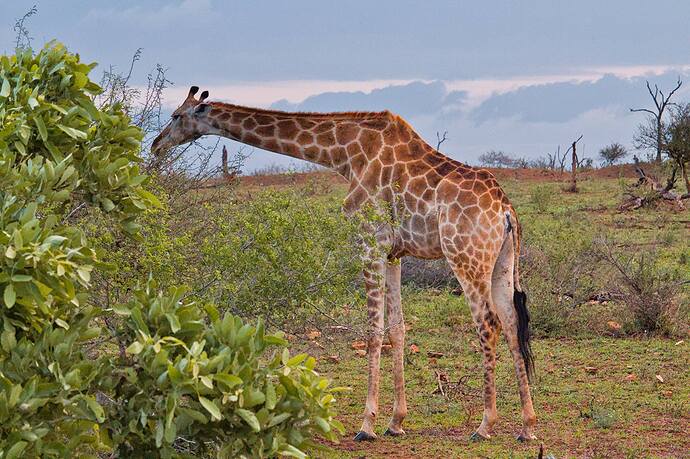 Thanks for sharing the image. It is always so interesting how everyone gets a different take on the same image. But that is the art of photography.

EDIT: I used a parametric mask with a little feathering and blur of the edges to do a second instance of exposure to get the sky how I was happy. 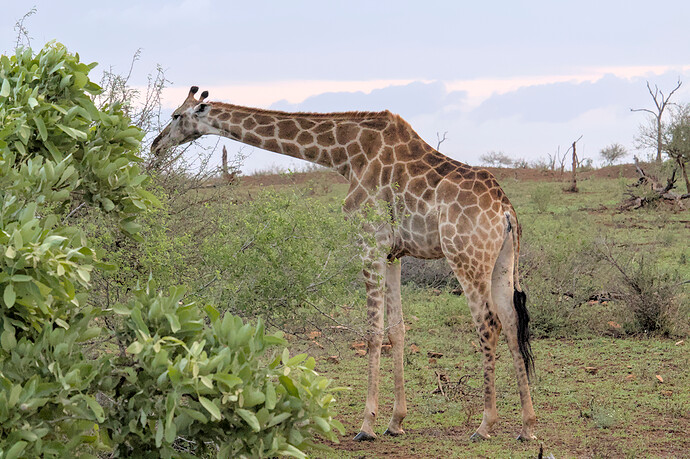 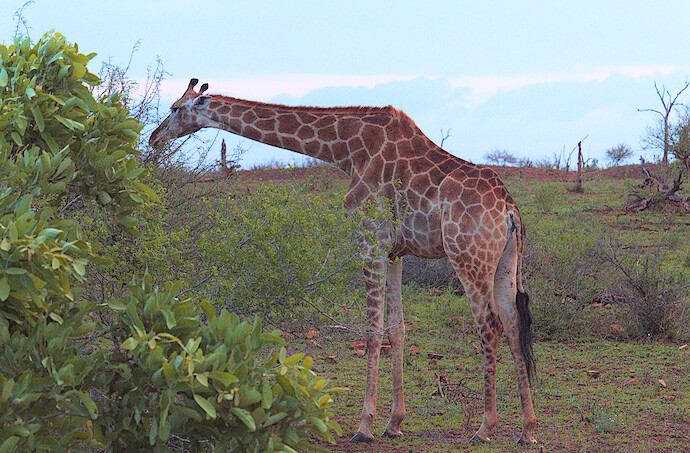 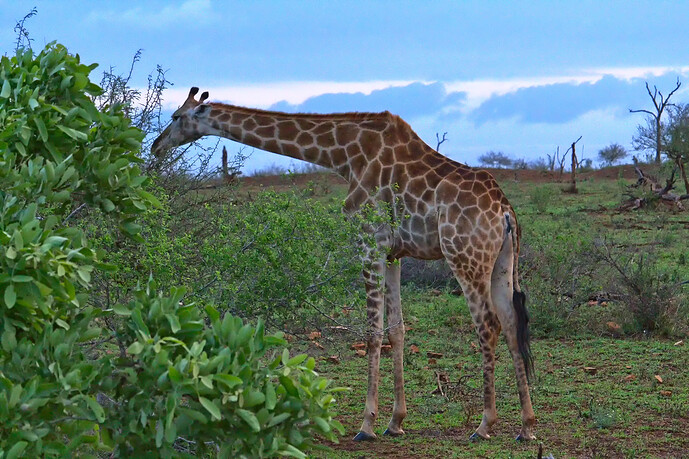 Thanks for sharing. I tried to make the giraffe stand out from the background by local adjustments to contrast and brightness - I hope with sufficient subtly. 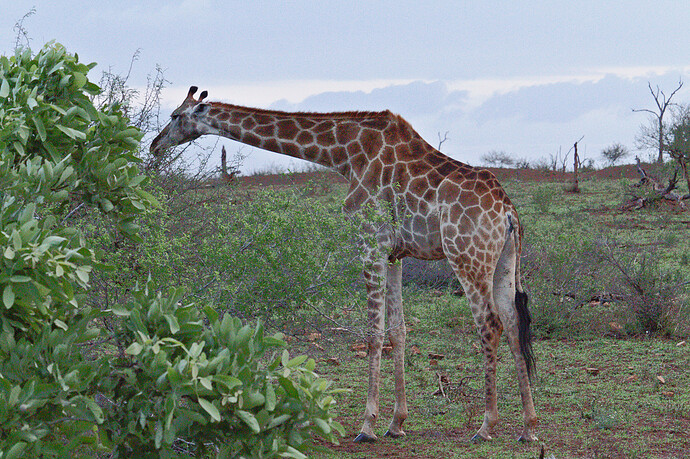 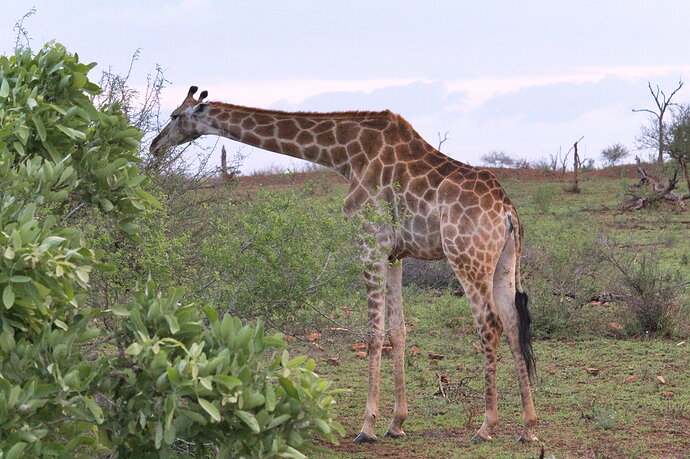 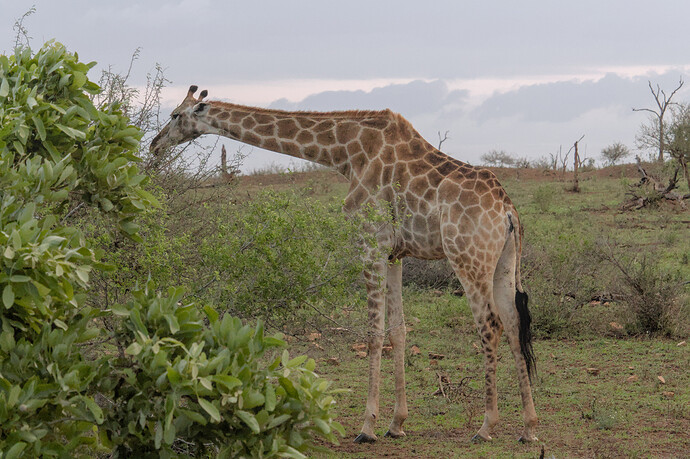 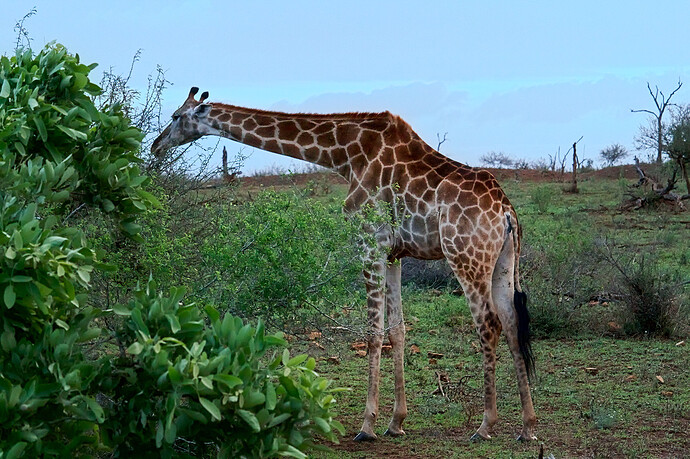 This is my approach with the RT 5.9 . I’ve tried to keep the look of the cloudy day, with its no intensive chromacity.

Thanks for posting
darktable 4.2 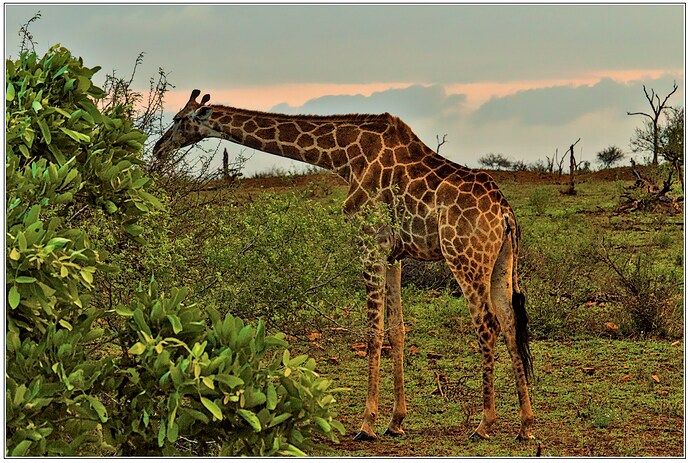 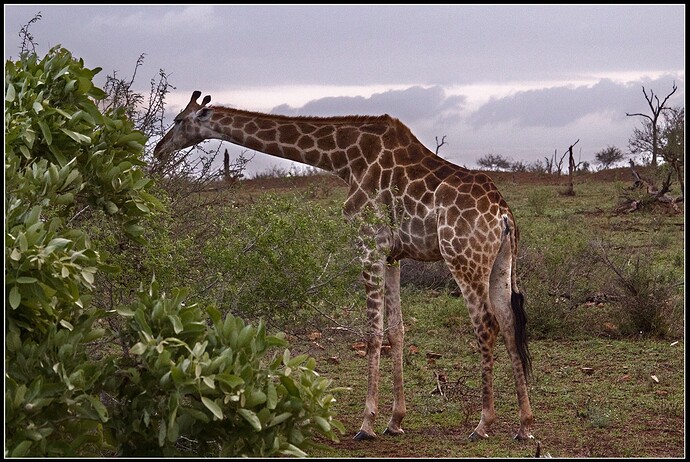 Thx, for the play!

Giraffe in a box. “OK, stop there! Stay still. Just try to be unnatural”. 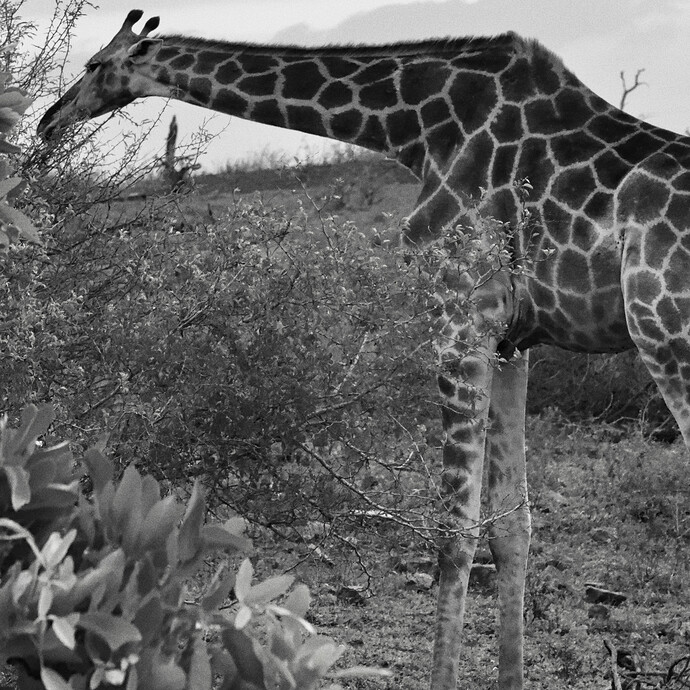 I feel compelled to explain my previous post.
The starting image is a lucky frame that I’d - hopefully! - had the opportunity to shoot. But I didn’t have that opportunity.
And the source image has many flaws that are not the fault of whoever took it, but the conditions in which it was taken.
The many elaborations that have been made of it all seem very similar because it leaves no room for personal interpretation.

Now, I’m not a professional photographer. I’m far from it. The first time I photographed was with a Kodak Instamatic when I didn’t have a mustache yet. Years later my sister lent me her Canon and I started experimenting with Kodak Ektachrome 64 ASA, Ilford FP5 films. Then I fell into the Nikon trap, first with a reflex whose name I don’t even remember, then with the digital cameras full of unfulfilled promises. Let’s skip over this.
After years without photos, because I had given the new Nikon SLR to my son (old lenses, new camera body), in the end I have recently re-appropriated photography on the cheap with something you can keep in your pocket when you go to work or traveling. A camera that even the manufacturer has now abandoned: the Panasonic Lumix LX100 II, the little one with Leica optics and an almost decent sized sensor.
At least I keep it in my pocket, I told myself.
I know it won’t be like having a bag full of lenses and lots of quality, but at least I keep it in my pocket.

And look, this is my first digital camera that saves in RAW format. Isn’t that great?

No, it’s not true that this is my first camera that saves in RAW, because in my daily work I digitize ancient documents for my university where I have to be as faithful to the original as possible (you know, EIZO monitor calibrated weekly, color checkers and so on). This is my first personal camera that saves in RAW.
And here the problems arise. At work I use Adobe Camera RAW and it suits me.

But at home I didn’t know what to use and so I discovered the marvel of software that is Darktable.

And like everyone (I think) when you get your hands on Darktable you read the guide, but then you look for the tutorials on Youtube and you discover many things that you like or not.

Then you land on discuss.pixls.us and find out more.

And then you too try to push the editing of your photos to extremes to obtain dramatic, artificially contrasted scenes with tonal and chromatic depths that you would never have dreamed of with your Canon F-1.

Eventually you feel drained. You are no longer yourself. You feel like a giraffe in a box and you don’t know how to get back to your old view of the world, one that used to be much more like the way the world used to be and still is.

But that’s just a personal point of view.

And to be honest I really like my version of the giraffe because it is honest and because it breaks the rule of the thirds and every other rule that rules. 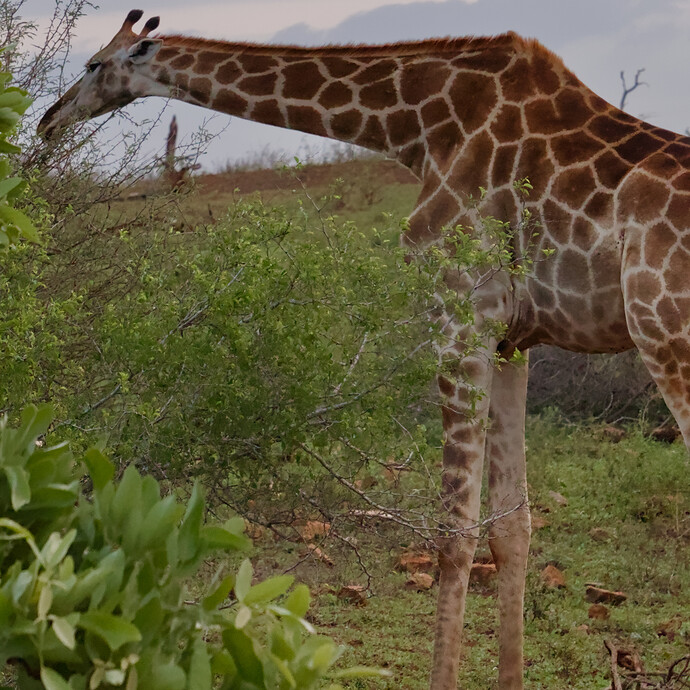